Having burst on the Scottish Metal scene back in 2016, CATALYSIS specialise in thunderous riffs that reek of blackened groove/death metal hatred, immersed within captivating arrangements that have their fair share in captivating twists and turns. 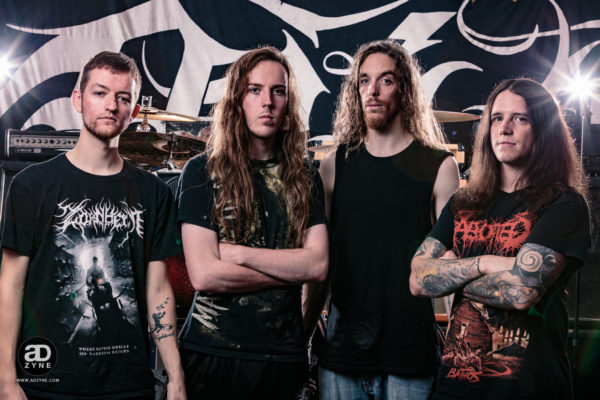 The band’s remarkably short history has offered up some top-shelf music that can be found on their existing two EP’s ‘Into the Unknown‘ 2017 and the more recent self-titled release that emerged in December 2018.

OD –  Give us a brief background on the band and the particular sub-genre that best describes who you are?

DREW – We formed in late 2016 when both my former band, Excellent Cadaver and our drummer’s former band split up. We’d been chatting for a while about getting something together and with both bands splitting up the timing was great.

We brought in a few people to pad out the lineup and wrote with that lineup for a while. There were a few changes in personnel and then we released our first EP. Later, we parted with our singer and our bassist Col stepped up to the plate for vocals.

The sub-genre thing is a difficult question, there’s a lot of groove in the songs for sure so if I had to go with one, I’d probably go with Groove Metal, but there’s huge influence from death metal and probably some metalcore and nu-metal influence in there too.

DREW – We currently have an EP out – “Into The Unknown” which was released last year on the 15th of December. It features our old vocalist Sam, who we split with earlier this year.

Our new self-titled EP was just released on December 14th last month. When Sam departed, he was replaced by our bass player Col. We’d already written the bulk of the material on the EP at the point that Col took over, but with no vocals.

We’ve released a couple of singles throughout the year with him on vocals (Deadline and Nothing Left, See videos below), but felt it was important to release a larger body of work to make a bit of a statement about where we are and how we sound now as a four-piece.

DREW – For me, my biggest musical inspiration has always been Machine Head, closely followed by Chimaira. I think I wear those colours fairly proudly on my sleeve and you can definitely hear the influence on our sound. In terms of one individual, I’d say Phil Demmel (Machine Head) has been my biggest inspiration, he’s the one who made me want to pick up the guitar in the first place and his playing has definitely shaped how I approach writing and playing my solos.

DREW – The local scene here is very fickle and there are very few bands doing what I would describe as “straight up metal”. It means we’re quite hard to fit onto a bill in a lot of cases, due to most of the other local bands being heavily rooted in the Metalcore/Deathcore scene.

Almost all of our hometown shows are ones I’ve promoted myself, which is fine, but it’s definitely frustrating to feel like you’re being overlooked for shows by bands you’ve helped out and given a leg up to in the past.

One person in particular from the local scene has been hugely helpful though, Paul MacMillan of Slow Dragon Music. He’s been a promoter in and around the area for a long time and he’s been really supportive of us from day 1. He’s had us on a bunch of shows in Dundee and Perth and has written a bunch of features praising the band on his site etc. It’s definitely something we’ve appreciated a lot as we struggle to carve our niche locally.

OD – With the dramatic change in the way the music industry has evolved, how are you experiencing the current climate with being a band starting out and what would you like to see change within the industry going forward?

DREW – As a band starting out, I find it’s pretty difficult to capture peoples attention due to the sheer volume of new bands and the ease of access to music. When I was younger, there was no Spotify/YouTube etc so if I wanted to find out about new bands it was either finding out through magazines or from friends or it was heading to the local venues and checking out whatever shows were on.

Even outwith that, there was MySpace which, at least initially, was a great platform to discover bands and interact with them through.

Realistically to get noticed now, I think you’ve got to be prepared to chuck a whole stack of cash at the problem – even people who’ve opted to like and follow your page on Facebook don’t see half the stuff you post unless you pay for boosted posts etc so it’s really hard to make your voice heard as a little guy.

It’d be great to see a way for new and emerging artists to really communicate with their fans and spread the word to generate new fans effectively without having to spend a small fortune. It’s super hard to reach people just now.

OD –  With regards to the process of writing material, is there a particular method that works, and if so, please let us know?

DREW – In terms of writing, most of the songs are predominantly written by either myself or Sean and brought to the band as a whole song although some have been a more collaborative effort from the two of us.

From there we’ll all learn the riffs and basic structure and tweak and refine it as we go. We do a lot of pre-production, so we’ll have an initial demo with programmed drums by whoever wrote the track, then a more refined version with Calums drum ideas in it, a later version with vocals and solos etc all before we start recording “properly”. We’ve found this approach useful in terms of being able to critique parts and really decide what works and what doesn’t and what we’re doing in terms of layering etc.

DREW – Machine Head, no doubt. Myself, Calum and Sean are all massive fans, and Col likes them too. There’s probably nobody else we could come close to agreeing to haha!

It’d be a tough crowd though, I’ve seen some supports go down pretty badly with their audience!

OD –  Tell us your favorite album and why it’s so important to you?

DREW – My favourite album is The Blackening, by Machine Head. For me, it’s the quintessential metal record – seething lyrics, brutal screamed vocals, crushing riffs segueing into beautiful melodies, it has it all!

It’s the album that made me want to play lead guitar and also the album that made me think much more in terms of songwriting and not just coming up with a bunch of riffs and smashing them together. There’s not a note out of place on the whole record, every drum fill, every lick, every harmony all works perfectly together to create something that’s bigger than music for me and it’s inspiring because even now, 11 years after it’s release I can put it on and find new things in the mix that I’d never noticed before.

I’d started playing 2 years before this album came out, but this was the record that really made me want to push myself – to be able to write and play crazy harmony lead parts like Aesthetics of Hate and Halo. I think the album really shaped my approach to music. It’s certainly the yardstick I measure all other albums by.

We just released our self-titled EP on 14th December, along with a hometown headline show at Beat Generator, Dundee to celebrate. I briefly mentioned the new EP above, so I won’t bore you by going too much into it, but we’re super proud of this one and one of the early reviews has described it as reminding them of “the younger, more talented era of Machine Head” so if that sounds like your thing, then please do check it out online from the 14th and order a physical copy from this link.

For more information on CATALYSIS please use the links provided below; 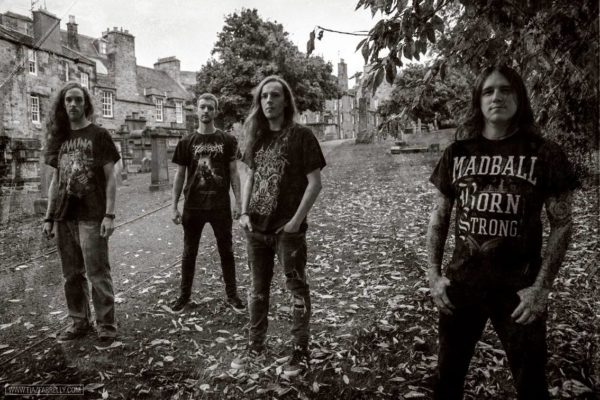