Hailing from Switzerland, Invoker specialises describe themselves as “a modern-hardcore band from the cold mountains of Switzerland” and have been creating their unique sound since 2012. Find out more below;

If you are a fan of emotional, heavy hardcore, that nods towards post-rock and black metal, Invoker is just for you!

Peter Lukas – (Guitars/2nd Vocals) – We are a five-piece band from right at the center of Switzerland. There is Andy playing guitars, my brother David doing vocals, Patrick playing bass, Raphael on the drums and myself. We were all good friends and wanted to do something new after, for some of us, our previous bands had split up.

In the core, I think, Invoker is mostly Hardcore. We play a somehow melodic version of that, with influences coming from Post Rock and Black metal. The lyrics are all based on personal experience and revolve around the topic of mental health issues like depression and anxiety. That’s why we call our genre Depressive Suicidal Hardcore in homage to the Black Metal Subgenre DSBM.

PETER – We released a self-recorded EP called Lose Lips Sink Ships in 2013, with our first few songs on it. A single called Lost/Alone came in 2014. In 2017 we released the first Album with the name Four Wall Nightmare, where we also recorded music videos for Waste and Deathwish.

We recently released the single Cease to Exist with a music video (see below).

PETER – Growing up with parents who both really were into the Rock side of music from the 60s and 70s, I was influenced by a lot of good music since I was born. I started with piano and, fascinated by a lot of different Rock genres, I picked up the guitar sometime after that. It has been my love ever since. It became a passion for both Andy and me, so we started our first band with 14 or something like that.

I couldn’t really name just one band who inspired me to start all this. All I know is that Metallica very likely pulled me to the ‘harder’ side of Rock music when I first heard them as a kid.

PL – I think our local scene has been very good to us from the beginning. Since most of us played in bands in the heavy music scene before Invoker and we’re going to see a lot of shows we all already had some friends there. So, there were actually people coming to the first shows. It means a lot to us and we feel comfortable and welcome.

Without the people supporting local and small bands and venues, we would miss out on a lot of good music, because there wouldn’t be a lot of bands starting out anymore.

OD – With the dramatic change in the way the music industry has evolved, how are you experiencing the current climate with being a band starting out and what would you like to see a positive change going forward?

PL – It got a lot easier to bring your stuff out there due to social media, streaming etc. which I consider a good thing. You can reach lots more people in places where it never would be possible to do so with just handing out hard copies at shows or having an autonomous website. 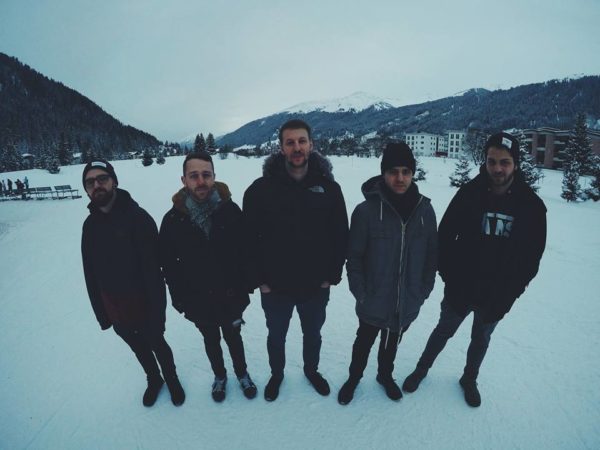 Somehow we’re all a bit closer together. But it also brought stuff like buying reach, likes, and followers, scams and new mid to big companies with the main goal of making money off music, bringing the focus on a product to sell and away from the beauty of the art. That’s why I love playing the small clubs and venues, cellars and bunkers, bars and all the beautiful punk places, local and everywhere. The focus stays on the music and the message and the people having a good time.

PL – In most cases, Andy or I or both bring some musical ideas or riffs or even ‘whole’ songs, and everyone together we try to form something out of it, that we like. Dave (Vocals) writes all the lyrics. He writes a lot and does his magic in finding the fitting poetry for the song we are working on.

PL – Landscapes. We played a few shows where we supported them in Switzerland. They are really good lads, we became friends. Their singer Shaun even made a feature on Haunt Me for our album! Too bad they are not active anymore.

PL – I could never really decide for a total favourite since I listen to a lot of different genres of music. There’s a bunch of favourites that are very important to me.

Also, you could ask me a few months later and it could be a different one. But if I really have to nail it down to one, I would pick Still Life by Opeth. This album blew my mind totally when I was 16 or 17 and still does. This band always motivates me to improve on my guitar skills.

What are the plans for the remainder of this year?

PL – We plan to play as many shows as possible and just hit the road as hard as we can. Big plans are in the mix for this year.

Get more information on Invoker via the selection of links below;
FACEBOOK