Swedish Death Metal Vikings, Amon Amarth will be bringing the Northern thunder, with a much talked about appearance at this years Bloodstock and a very exclusive one off performance in Dublin’s Academy on August 13th. Find out what vocalist and man mountain Johan Hegg has in store for their live shows and find out how you can win tickets to the Dublin show. You wont be disappointed. 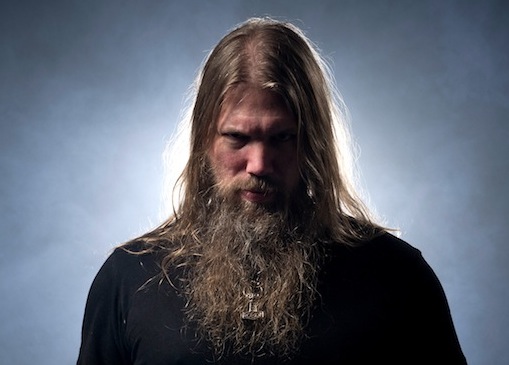 OD –  The concept of the new album “Deceiver of the Gods” is still keeping with the mythological aspect of your previous albums, can you talk a little about the concept/ideas on this new album?

Yohan – Well there is no concept per say. We have always written about Nordic history. I guess on this album there was some idea / stories linked to the Norse God Loki, and he became kind of the main character of the album and “Deciver of the Gods” became the title!

OD – Were there any working titles in the mix before choosing “Deceiver of the Gods”?

Yohan – Wow! I can’t really remember (laughs). It was a really long time ago. I think when we were going through the album titles we had some ideas about the cover, which led to the inspiration of the record title. It was pretty clear that “Deceiver Of the God’s” was the best title and we are all very happy with the decision.

OD –  The new album was recorded, mixed and mastered with Andy Sneep in his Backstage studios, can you talk about the experience working with Andy and was there any talk of Hell & Amon Amarth touring together again in the near future?

Yohan – We really enjoyed working with Andy. I personally felt a bit “shaky” as we have never recorded abroad before. It was the first time that we had traveled abroad to record and even though we have good English speaking skills, there was still some concern, as there was always a risk of a language barrier making an appearance at some point. Working with Andy was a great experience and we all had a great time. I think it worked out really well. Regarding touring with Hell, we already toured with them in the past with Carcass, but in terms of doing it again, I guess you should never say never (laughs). We had a great time with those guys, it’s hard when it’s been done. Both for them and us, I think we all just want to move on a reach new crowds with new tour packages.

OD –  When you went in to the studio to record were there any songs that dramatically changed once the recording process had begun? 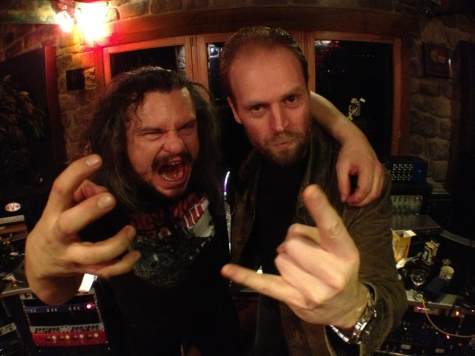 Yohan – Not really! Because it was the first time working with Andy, we wanted to be very prepared with the material we had. We pretty much turned up with complete songs and before we arrived we had been sending Andy demo tapes and all of those little things were taken care of prior to recording. I can’t really remember any major changes with the music, but there was a few words and phrases changed on the lyrics, but nothing really dramatic.

OD – Looking back to when you released “Once Sent From The Golden Hall” in 1998 to present day with “Deceiver of the Gods” had you ever envisioned that the music industry would have changed so dramatically in terms of how music is consumed and the role of the labels?

Yohan – No, I don’t think so. I remember when Napster came around and the outcry and drama of the whole thing. Everybody had a prophecy of the music industry dieing. Looking back, there was no way of really predicting what could have happened. Even now with Spotify and iTunes and illegal downloading etc. On the other hand, once you have something like Napster it’s kind of inevitable that progress would take that path. It was kind of like opening Pandora’s Box (laughs).

OD –  Amon Amarth album covers are known for elaborate fantastic artwork, can you talk about the process of how you decide on what a cover should look like and how the design of “Deceiver” came about?

Yohan – Well actually, there is a couple of things that we felt about the cover in our minds. If you look at the previous two album, we had very strong central characters like Thor. On this cover we had Loki as the central character. In this case we just didn’t just want him to be the main feature on the cover, so we had the idea of the last battle on earth where he leads his army of the dead against the house of Gods and this image is just before the clash on the battle field.

The reason we did this was because when we do our stage backdrops, there is always the main character by the drum riser and that’s it. We wanted something darker and I think we achieved that. Normally we would think about the cover and then take it to the artist. On the last three albums, we had German artist Tom Theil work on the design and he usually sends us back sketches and drawings and it goes back and forth and that’s how it all comes together to the final image. So the process is very ongoing and shared between the band and Tom. 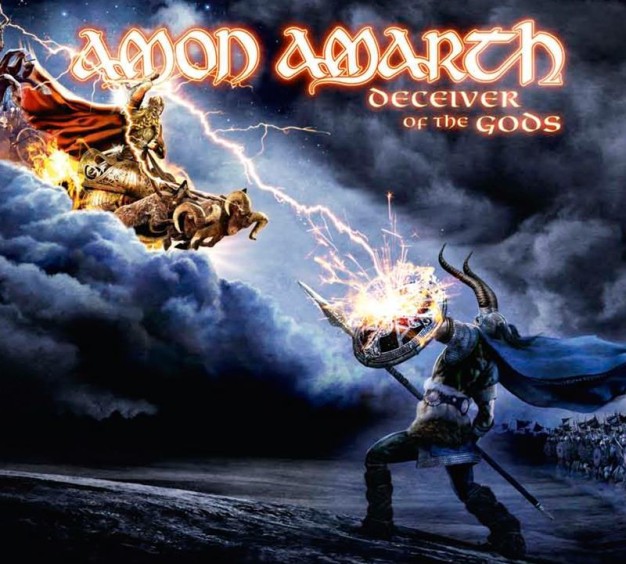 OD – Did Tom actually paint the cover or was it designed digitally?

Yohan – He actually painted it. That’ what we really like. We grew up in the 80’s and were influenced by the covers of Iron Maiden etc and all that stuff. We just love stuff like that and even thought it doesn’t really work visually as well on CD, we still really love having covers like that.

OD – How important do you believe that artwork and branding are for Amon Amarth?

Yohan – I’m not sure on a market scale, but it’s definitely very important that music and lyrics go hand in hand and music, lyrics and artwork goes hand in hand. I’m sure the guy who just downloads his music cares that much about it but to us it’s definitely very important that everything fits together and I think that we have achieved that level of importance with all of our albums and live shows.

OD –  You will be taking to the stage at this years Bloodstock, do you have a full long boat and pyro stage set up for this show? 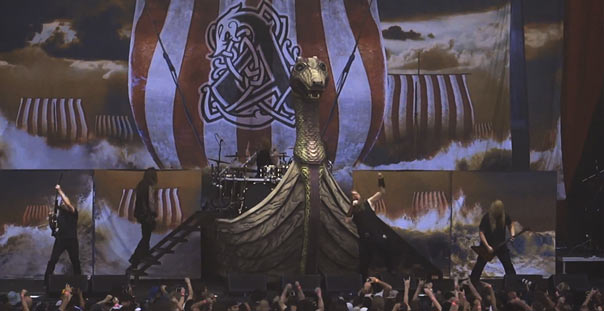 Yohan – (laughing) It’s a little bit under warps right now, but all I can say is that we have a killer show lined up. I hope nobody is going to be disappointed, but I just can’t disclose that much at this point (laughs).

OD – A few days later you will be playing in Dublin on your own headlining show, can we expect to see a set list that delves into your back catalogue or are you concentrating more on the new material? 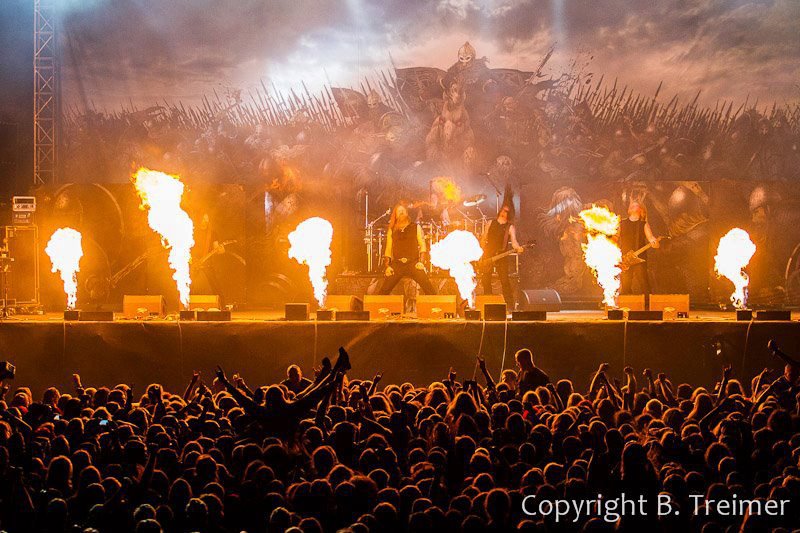 Yohan – I think that this will be our fist appearance in Ireland on this new album and there is going to be a lot of focus on the new material, but we will also put in some old gems from the back catalogue. It’s kind of hard when you have nine album to choose from! (laughs) We try to dig out some of the older stuff all the time. For us the most recent stuff seems to be the more popular stuff and we tend to delve into that to keep the fans happy. We have not decided yet on the set list for the Irish show but I’m sure it’s going to please everyone.

OD – From you previous shows in Dublin, did you have much time to investigate the city?

OD – Bloodshed Over Bochum  saw Amon Amarth revisited a classic album each night from your back catalogue over a series of gigs in Germany, are there any plans to do this again, but concentrating on newer material/albums?

Yohan – No none really. Well, not yet anyway. We haven’t really talked in depth about it. The topic has come up, but we kind of feel that the latest albums need to get a bit of vintage on them (laughs). It was possible to do that back then because those album are now quite old. Never say never really, it’s not a working idea at the moment, but who knows down the line, it just might happen again.

OD – With the release of the new album “Deceiver” you recorded the video for “Father Of the Wolf” Brian Slager was involved personally with this project, can you talk about working with Brian and how it came about and will there be any more similar projects for the future?

Yohan – Well, the idea was to make a very epic, movie like video and our involvement was very small technically because we only did the live footage and were not really involved in the overall production of it. Brian was 100% behind it which was good because it was very expensive to do (laughs)!

OD – You recently took part in the Viking movie “Northmen”, how important was recreating the Viking history in this movie as opposed other Viking themed movies and how was the overall experience?

Yohan – It was a great experience and it was a new for me as I have never been in a movie before. I learned a lot doing that and really enjoyed it.

The story is about Vikings who are on their way to raid a monastery to get the money to buy their freedom and their boat capsizes and they end up in Scotland which is enemy territory. This is a purely fictional story, but they really put some effort into making authentic weapons and movie sets. It’s really awesome and can’t wait for it to come out.

Amon Amarth will be performing at this years Bloodstock Festival in Catton Park on Sunday August 10th, followed by an exclusive intimate show in Dublin’s Academy on Wednesday August 13th.

Tickets for the Dublin show are are now at limited availability and can be purchased here.

For more information on support, doors, tickets and stage times, please head over to MCD for all the latest information. 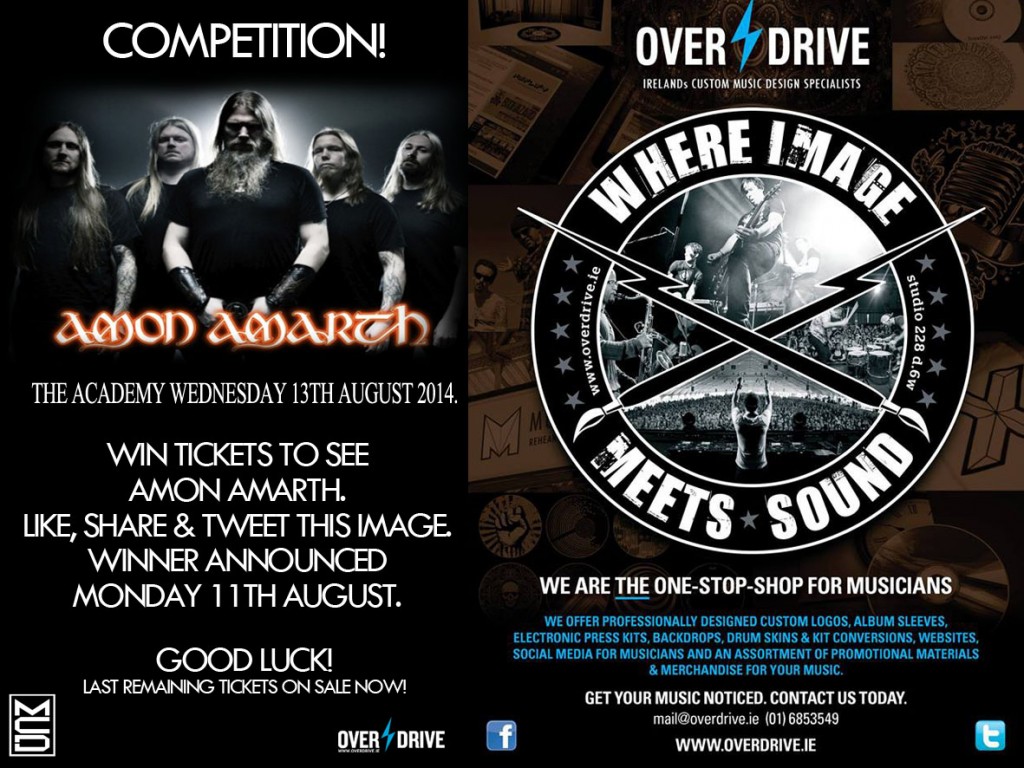