Overdrive talks to The Treatment ahead of their headline Dublin show on June 18th.


Having achieved a staggering amount of life changing milestones in their relativity young career, The Treatment gear up for their first every headlining show in Ireland. Overdrive caught up with bass player Dhani Mansworth and chatted about the new album and what to expect from their Academy 2 show on June 18th. 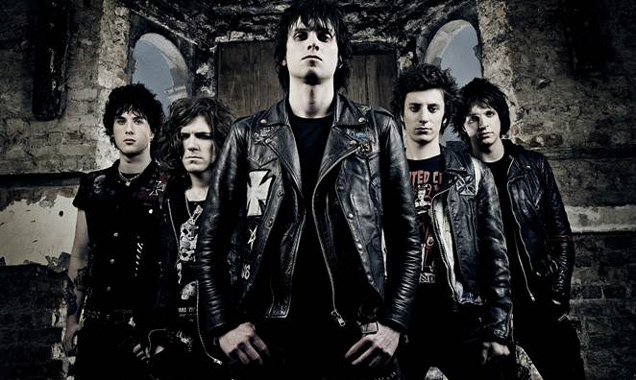 Ahead of their debut headlining show in Dublin’s Academy 2 on June 18th, The Treatment are busy promoting their new album “Running With The Dogs” which is out now via Spinefarm/Universal Records. The album is a blistering collection of “Classic Rock” sounding songs peppered with elements of 70’s snarling Punk Rock and will satisfy the needs of any Rock fan who likes to strap on a bandana and break out the air guitar.

Bassist Dhani Mansworth takes time from his busy schedule to fill in the gaps of how the band came about and what we can expect from the Dublin show.

Dhani – I was about fourteen years old and I approached my Dad who had been a musician himself, and I told him that I wanted to put a band together because I felt like I was really ready to do it and he jumped at the chance to work with his son. We put a few ads out on Myspace and through the colleges and stuff. We then came across Ben who then left and through him we met Rick “Swoggle” Newman (Bass) who introduced us to Tag (Tagore Grey, Guitar). We tried out a few different singers and it didn’t really work out, but then we found Matt Jones (vocals) through Myspace and then it was like a domino effect with all the other people that we met.

OD – Can you talk about the name, I belive that you took it from inspiration of Dr. Feelgood, is this true and if so was it the Motley Crue record or the 1970’s band Dr Feelgood? Did you have any other options regarding names from that album or otherwise?

Dhani – The name came from the Dr. Feelgood band with Wilco Johnson. We are all really big fans of those guys and the name just felt right. 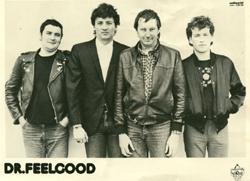 OD – Being so young, it’s good to hear that you are playing straight up “Rock” rather than trying to jump on the bandwagon of all the “scream-o” style bands that are out there these days. Do you find that your playing a style of music that seems to be a little forgotten amongst younger bands these days? 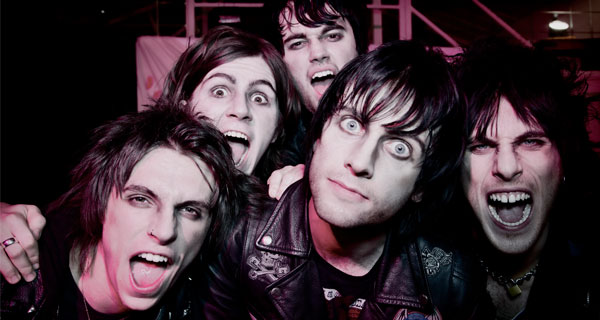 Dhani – We have just always just played the music that we liked and felt comfortable playing. We all like to listen to Metal when we are chilling out or on tour or whatever. But we find that no matter what we listen to, we always feel drawn to the music that we grew up with. Bands like Aerosmith, AC/DC and Van Halen come to mind. There are not many bands that are doing that style of music these days and we thought that it would be cool to start up a new scene with more “Classic” Rock sounding element.

OD –  Coming from Cambridge, did you find it quite hard to break out of your local scene and get the respect of the music industry in London?

Dhani – To be honest, we are very proud to be from Cambridge, but our biggest fan base is in London! It’s only 40mins away from us, so it’s like our second home. Because Cambridge is a University town, there is so many different scenes from Indie to Metal to Hip Hop. There is not really anything really solid in Cambridge, where’s in London there is a really big established Rock scene and that’s what we tried to achieve when we first stated out.

OD –  The title of the new album is “Running With The Dogs”,  can you explain why you choose this title?

Dhani – The whole idea of “Running With The Dogs” came from the concept of a kind of gang or a scene of people trying to come together to achieve their own goals and unify their ideas and actions. This is really the essence of that The Treatment are about, so it just seemed right to call it that.

OD –  You recorded your first album “This Might Hurt” at Steve Harris’s (Iron Maiden Bassist) Barnyard studios, how did this come about and did you meet Steve at all?

Dhani – We actually met Steve around the recording of the first album. It came about that we got to record in Barnyard, because my Dad was actually in a band back in the early 80’s called MORE and they toured with Iron Maiden on the Killers tour. It was the original line up with Paul Di’anno back in 81 and he made a mutual friendship with Steve (Harris) in those days. In later years he got back in contact with Steve through another friend Tony (Newton) of Voodoo Six, who does a lot of stuff with Iron Maiden and also engineered our record. So you could say that the whole process happened through mutual friendships.

OD –  You have made it known that one of your influences is the Sex Pistols among other bands, do you like any other Punk bands and if so who?

Dhani – We are all really big Punk fans and have a big back catalogue of stuff we listen to like obviously The Sex Pistols, Cockney Rejects, Sham 69 and The Damned to name a few. We love the attitude and energy of Punk bands and we try to bring that into our music.

OD – Most Rock band’s don’t really listen to Punk, this is a refreshing change from the norm, will there be a more concentrated influence from this genre in future songs?

Dhani – I suppose, if we were to go any heavier we would rather go down the Punk roots rather than Metal. I think that’s why a lot of kids like us! Even though we sound like a Classic Rock Band, we don’t sound like Rival Son’s. We have more of a Punk energy in the vein of Guns n’ Roses. We are on the other scale with more of a 70’s Punk style mixed with a Classic Rock sound.

OD –  Is there any particular system to the way you write your music?

Dhani – We usually get in a room and someone will come up with a riff, or we will get a vocal melody and everyone jsut throw’s their ideas into the pot and we just jam it out! It’s a very mutual thing with us and writing and our approach to it just works for us.

OD – You opened for bands such as Thin Lizzy, Motorhead, Slash and Steel Panther, do you have any stand out memories about those shows?

Dhani – I think one of the best memories we had was when we were on tour with Steel Panther and we were in Manchester and got the call that we got the support for the entire American Kiss and Motley Crue tour! That was an ‘Oh my God” moment for us, no doubt. There was always talk about it, but we didn’t expect anything from it because it was such a major tour to get and we didn’t expect to get it so it. It was just put on the back burner and when we found out it was just a huge moment for us.

OD –  Can you talk a little about the design of the album cover and where the idea came from?

Dhani – We always had an idea in our head for a kind of biker gang type look, so we took that to our designer at our label and he messed around with it but then we had to change things all together because Ben left. 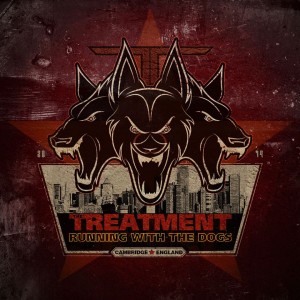 We were going with a photo of all of us on the cover, but when Ben split we had to mix it around and come up with a different idea. The label designer came back with the image of the three headed Dog and we just loved it! So we built on that idea and it then came to what it is now. We are all very happy with it.

OD – What is your all time favourite album cover?

Dhani – I would have to say AC/DC “Powerage”. Ever since I was a kid, I have always just loved that cover. Angus has all the leads and wires coming out of him, it’s just so cool. 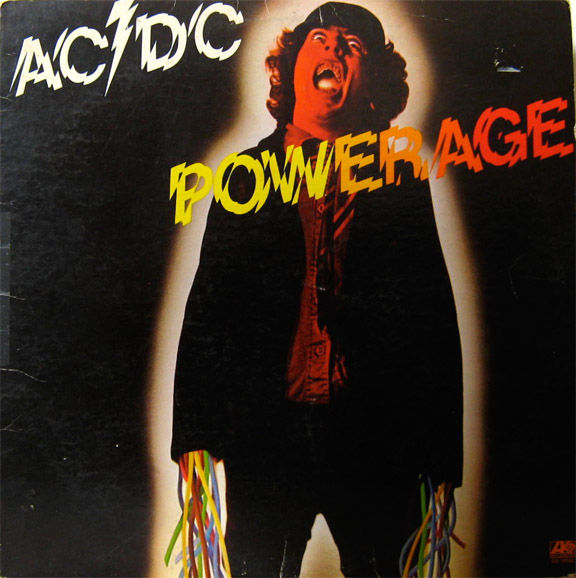 OD –  You are playing Dublin’s Academy 2 on June 18th, can you talk a little about what to expect from The Treatment in a live setting?

Dhani – It’s all very high energy. There is no gimmicks with us playing live. We just make sure that we have a great time and put the music first. It’s what we really love doing and I’m sure that the crowd get that when you see us live. It’s gonna be a great show and our first ever Irish headlining show. We can’t wait for it!

Ticket for The Treatment are now on sale and are available from this link. This is a 14+ show. For more information on this show and others, please go to MCD for all the latest. 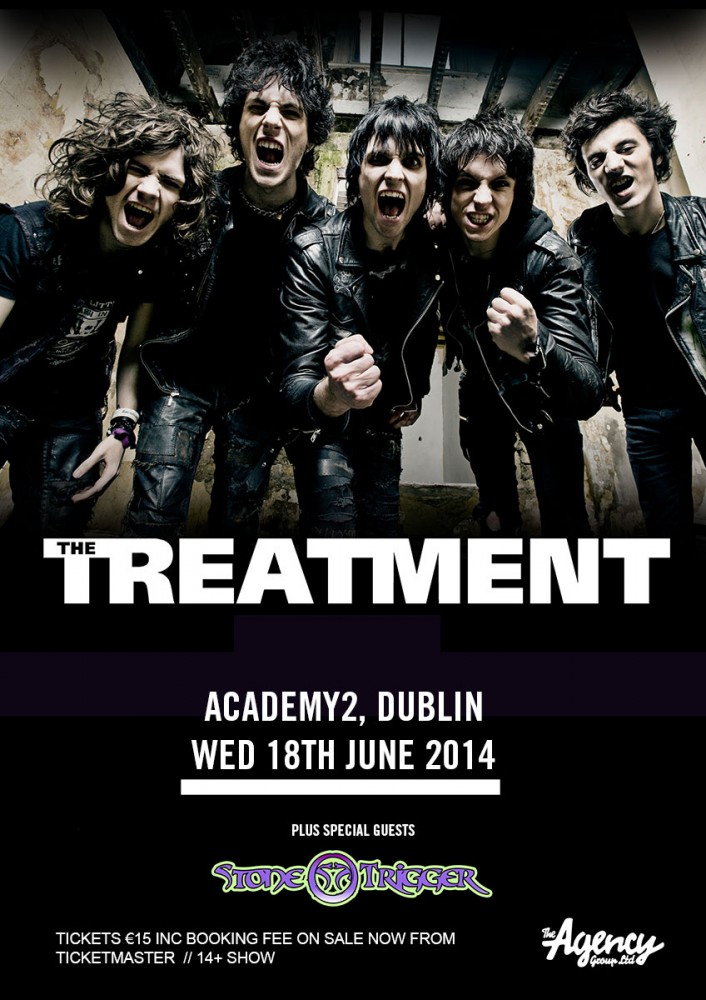