We have been waiting for nearly 30 years for the NJ Wrecking Crew to grace a stage in Ireland and that day finally arrived on Saturday March 15th. Was it worth it? Overdrive gets stuck in and delivers the dirt on this historic night of old school Thrash! 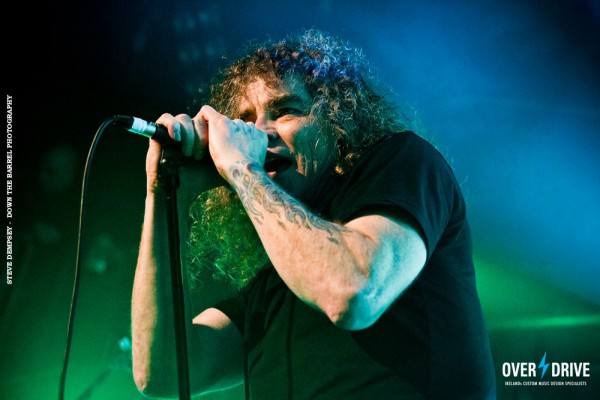 Opening the proceedings tonight are Shrapnel who launch into attack mode with fierce double peddle and buzz saw riffage. The Norwich five piece waste no time in churning out their sonic artillery to a growing crowd, who are dragged away from the merch stand by the bands sheer power and engaging performance.  These guys are definitely one to keep an eye on, as they show a great deal of potential amongst the clutter of young Thrash bands currently knocking about. Currently signed to Candlelight Records check out the current release titled “The Virus Conspires”.

Next up is the almighty Xentrix, who just overflow with confidence and pure professionalism. It’s amazing that Xentrix never became as huge as their riffs, which would give Metallica a run for their money circa “Master of Puppets” era. Opening up with “No Compromise” and giving the now nearly packed out venue a real taste of Thrash, the band drop classics “Questions”, “Back To The Real World” which see’s the first pit of the evening open up with a blur of skinny drain pip denim jeans and white hi-tops. Is it 1987 again? It sure feels like it. Xentrix are just stunning tonight and have the entire venue in the palm of their sweaty hands.

A short speech from vocalist Chris Astley on the bands new album and the inspiration to record based on the reaction from the Irish fans, leads to an almighty roar from the crowd. With a new song in the set list, the band waste no time in getting the floor moving again with bodies bouncing from front to back and left to right. A very promising sound for Xentrix in 2014 and a definite highlight from the show tonight.

So the time has finally arrived and the anticipation in the venue is now at bursting point! With the mass of denim jackets scrambling to the bar and toilets in a frenzy to either fill or empty the bladder, generates a hectic panic for everyone to be in place before the New Jersey Thrash legends take to the stage for the very fist time in Irish history.

A very impressive array of light cannons are getting their last check before the into music comes blaring out of the house PA and the deafening roar from the sold out Academy confirms the arrival of OVERKILL.

The band waste no time in getting straight down to business with opener, and aptly named “Come and Get it” followed by classic “Wrecking Crew” which generates a shit storm of organised chaos down on the main floor. Venue security are put through their paces tonight as the band steamroll through their back catalogue. The crowd are lapping it up and continue to react like a powder keg with each offering. “Electric Rattlesnake”, “Hammerhead”, “Rotten To The Core” come at us hard and fast.

Even though the guys are slowly approaching their vintage years, there is just no let up. “Hello From The Gutter” sounds just as bad-ass as it did the day it was released and is executed with pure precision and brutal professionalism.

Bobby Blitz is in rare form tonight as he comments on the bands absence from our shores for their entire career. “How do you feel knowing that your Grandpa is kicking your ass”! Considering that the average age at this show is 20 something there is a possible chance that Overkill could very well be a Grandpa to some of the kids on the floor!

The light show tonight is one of the best Overdrive has seen in this venue and just makes the overall experience one that we will always remember. Driving home with classic after classic from “Necroshine”, “In Union We Stand” and the fucking awesome “Elimination” it’s fast approaching the end of this historic show.

As the band leave the stage, the chants are so loud that dog’s are barking in residential areas of Dublin city. Sure enough, we get a killer encore of “Horrorscope” and the anthem that is “Fuck You”.

A fantastic show that was totally worth the 30 year wait! Let’s hope that it doesn’t take another 30 years for the OVERKILL wrecking crew to make their next appearance.