With news breaking last night (Tuesday 14th Jan) that Overkill had cancelled most of their European dates, there was slight panic amongst the die hard Irish fans. 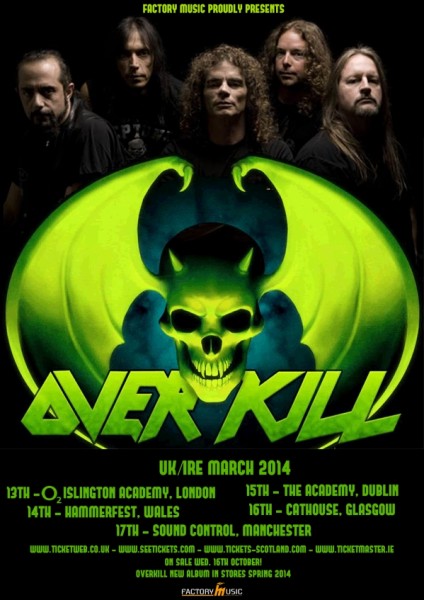 The reason for the cancellation of these dates is based on the band recording of their forthcoming album. The official Overkill page states “Overkill had moved it’s release date for the new record (which they are currently working on) til July. As a result the shows scheduled for March (except UK dates) will be moved to the Fall when you can expect a tour and a new release.” although it’s unfortunate for the band pulling so many shows we can consider ourselves very lucky that the Thrash legends will be taking to our capitals stage on March 29th.

A statement from DME Promotions this morning (15th January) reads ” Some of you may have seen the news that Overkill have cancelled their Euro tour in March. Fear not though….the UK/Ire leg stays in place and they will still hit The Academy along with Xentrix on Sat. March 15th. It does, however, mean that Skeletonwitch will no longer be on the dates. A replacement will be announced soon.”

As soon as a replacement for Skeletonwitch is announced, Overdrive will let you know. In the meantime, a limited number of tickets are available from Ticketmaster and Sound Cellar.