New Jersey Thrashers Overkill will be embarking on a series of European/ UK dates in the coming week, and to celebrate, they have released the final episode of their “Garden State” documentary. Watch it here…

Today, the band released the final episode for their multi-part documentary series entitled ‘Welcome To The Garden State‘.

Watch as the band discusses their defining moments that have shaped how the band has evolved and created their legacy, below;

“Those defining moments make us what we are today” comments, Bobby Blitz. “So to say you are proud of yourself this many years later, you go back and say that’s because of those defining moments. That’s because it made me the person I am today or it made us the team we are whatever; through the lean times, rich times, good times or bad times. I think we always had the same ideas but we had the same preparation.”

To celebrate the success of the album, OVERKILL are going to release a very special and strictly limited shaped vinyl, with the songs ‘Last Man Standing‘ and ‘BatShitCrazy‘. The shaped vinyl will be released on April 19th via Nuclear Blast.

Overkill will be taking to the stage in the Irish capital with special guests Destruction and Flotsam and Jetsam. Official event page here. 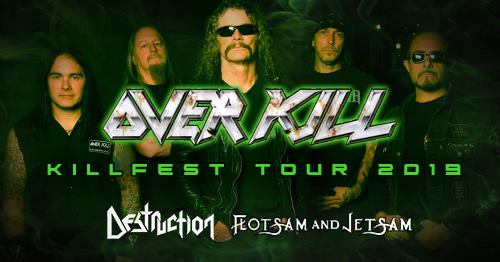 Pre-order the vinyl and ‘Wings of War’ LP here.