PRONG will take to the stage this Thursday in Dublin’s Voodoo Lounge!


This Thursday night will see the mighty Prong back in Dublin to play an exclusive one off show in the Voodoo Lounge ahead of their appearance at this years Bloodstock Festival, which kicks off also on Thursday. 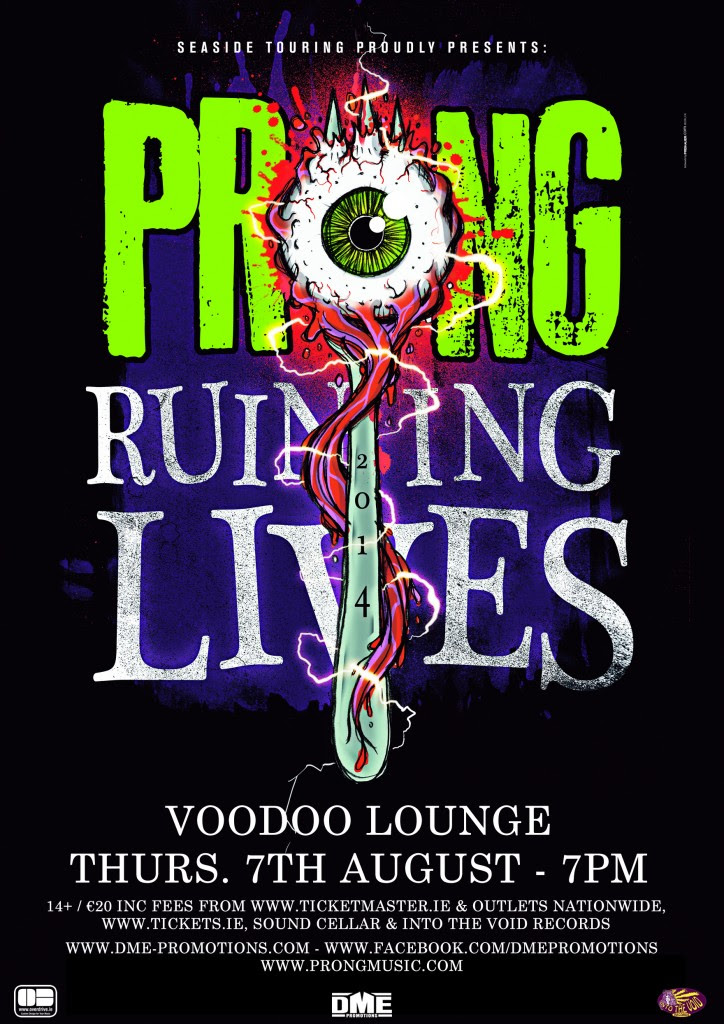 The band are in Europe for a string of dates and of course their appearance at the 2014 Bloodstock Open Air Festival, which kicks off this Thursday. With the recent release of “Ruining Lives”, Prong are back with a bang and will be tearing Dublin’s Voodoo Lounge a new one with local Death Metal bruisers, KILLFACE as support.

A limited amount of tickets remain for this show and is expected to sell out so get your hands on yours today!

With the bands latest offering, you can expect to get hammered down with some of the sweatiest grooves since “Cleansing”, Victor sounds freaking emancipated as he rides “Remove, Separate Self”‘s bang with succulent riffs and elevating choruses. Silently, you just know he’s hoisting a middle finger toward his former label. In a less-crowded music market, the heat-seeking “Remove, Separate Self” would be an instant hit. “Absence of Light” likewise hits the lobbing slink methods from “Cleansing” and pays off nearly as much. The anticipatory verses are killer and though the choruses may overextend beyond the ugliness preceding them, “Absence of Light” continues to show Tommy Victor enjoying himself. Once again on “Self Will Run Riot”, Victor hits everything from “Prove You Wrong” through “Rude Awakening” to assemble a constantly churning riff fest setting up effervescent choruses that hardly overextend in this case.

The title track pulls the reins (most of the time, anyway), but certainly not the heaviness. If anything, “Ruining Lives” is one of the album’s crunchiest offerings with Victor’s suffocating rips, Jason Christopher’s rolling bass and galloping double hammer from Art Cruz. The song is given an added boost courtesy of a thrashed-out solo section, smartly juxtaposed within the mid-tempo grind surrounding it. Speaking of thrash, hang out for the fierce flurries of “The Book of Change” and “Chamber of Thought”, the former featuring some of the wildest licks PRONG’s ever laid claim to. Victor’s on fire with these cuts and his backing mates are well-up to meeting him headfirst.

Art Cruz and Jason Christopher should be given credit for keeping Tommy Victor inspired. Christopher’s backing vocals are hefty and he’s a freakazoid with his bass whuffing on “Come to Realize”. PRONG these days is hardly the same three-headed hydra as it was in the “Beg to Differ” and “Prove You Wrong” years, much less “Cleansing” and “Rude Awakening”. On the other hand, this is the most self-assured Victor has sounded in ages, not that “Scorpio Rising” or “Power of the Damager” were bad albums. Those felt more like Victor’s desperation to exist, while “Carved in Stone” and now “Ruining Lives” feels like his personal liberation. As Victor would snarl on “Snap Your Fingers, Snap Your Neck”, cheers…

Tickets for the show are now on sale from this link.