Rabid Bitch of the North are pleased to announce details of their highly anticipated second album, entitled “Heavy Metal Rabies”. 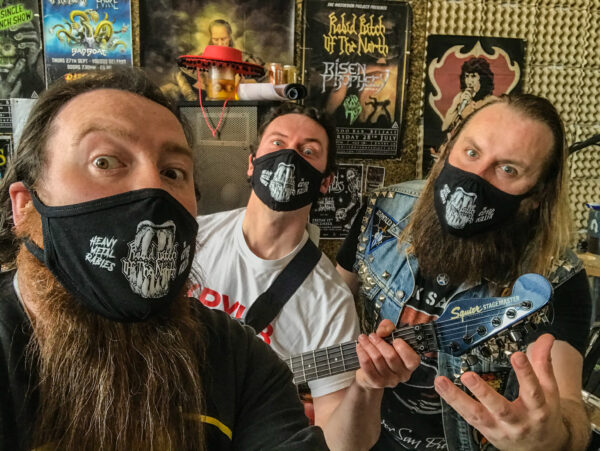 Slated for a May 2021 release, it will come out on the newly-resurrected Distortion Project Records – the label arm of Belfast-based heavy metal promoter, manager and tour booker/manager The Distortion Project.

The band’s sophomore effort will consist of eight brand new tracks of pulse-pounding, old-school heavy metal. Forged in the fires of the genre’s venerable antecedents, Heavy Metal Rabies is choc-full of classic fist bangers to get the blood pumping. If you like your metal with a healthy dose of denim, rivets and sweat then this is the album for you! Following on from 2017’s well-received debut “Nothing But A Bitter Taste”, Heavy Metal Rabies builds on the foundations laid by that album and expands upon their trademark sound still further.

Rabid Bitch have matured as musicians and songwriters, and it shows on these 8 dynamic, well-crafted heavy metal anthems. Comments’ Guitarist Gerry Mulholland “Our second album is quite literally the next step for us. If things were different we might have had another album out as well, but juggling a band and outside band life is tough as you have money and time constraints.

So, what we will be putting out will be new material built on foundations laid down by everything we have written and recorded previously. We aren’t going off in any new directions, we are just solidifying what we are and that is a heavy metal band steeped in the traditional genres of the golden era of metal.

A natural evolution in our ability and musicianship will be on display and we’ll be incorporating some things we haven’t done before alongside the tried and tested formula of our previous releases, but with a little more refinement. Strides will be taken towards purifying our sound and making it into the kind of metal we all believe in. The production will be another notch up from the first album and the lessons learnt from that will bolster our sonic signature for the listeners.

One thing I have purposely aimed for is more dynamic material to show a little more complexity but without losing touch with the material from our previous album. I believe this makes for a perfect vehicle to showcase some things people may not have heard from us before. Two new songs have already been played live at the Fullmetal Osthessen festival in Germany and they went down a storm. We’re hoping that what follows with the rest of the album will also satisfy the hardcore headbangers out there!

In the New Year, we will be taking the tracks on the road with the aim of spreading the heavy metal rabies as far as we can. So after this pandemic is over and everyone survives we can unleash our own virus in a much more enjoyable way, infecting new fans from place to place and wherever we can get on stage.”

The album will be preceded by a single with an accompanying video. As well as being available on CD, Vinyl and cassette the album will be released on all digital formats, to include Spotify, iTunes, Amazon, GooglePlay, Deezer and many others.

The band are also pleased to announce the first few dates of the “Rabies Over the UK 2021” tour in support of the album.

Check out their last studio album below:

These will be their first shows on the mainland in 3 years, with many more to come including a return to Europe and beyond! The confirmed dates so far are Thursday 27th May. The Patriot, Crumlin – Wales Friday 28th May. Hanger 18, Swansea – Wales Saturday 29th May. Gryphon, Bristol – England Sunday 30th May.

TBC To celebrate this announcement the band have released a brand new piece of merchandise in the form of a limited edition COVID-killing mask. Rabies trumps coronavirus every time when you’re wearing one of these! They’re on sale now at £5.50 + p&p from this link.

So, get yours now and mark yourself as safe from the ‘rona!