California funketeers, RED HOT CHILI PEPPERS return to Ireland for their rescheduled dates which were postponed last December. I’m beginning to wonder, should they have bothered at all? 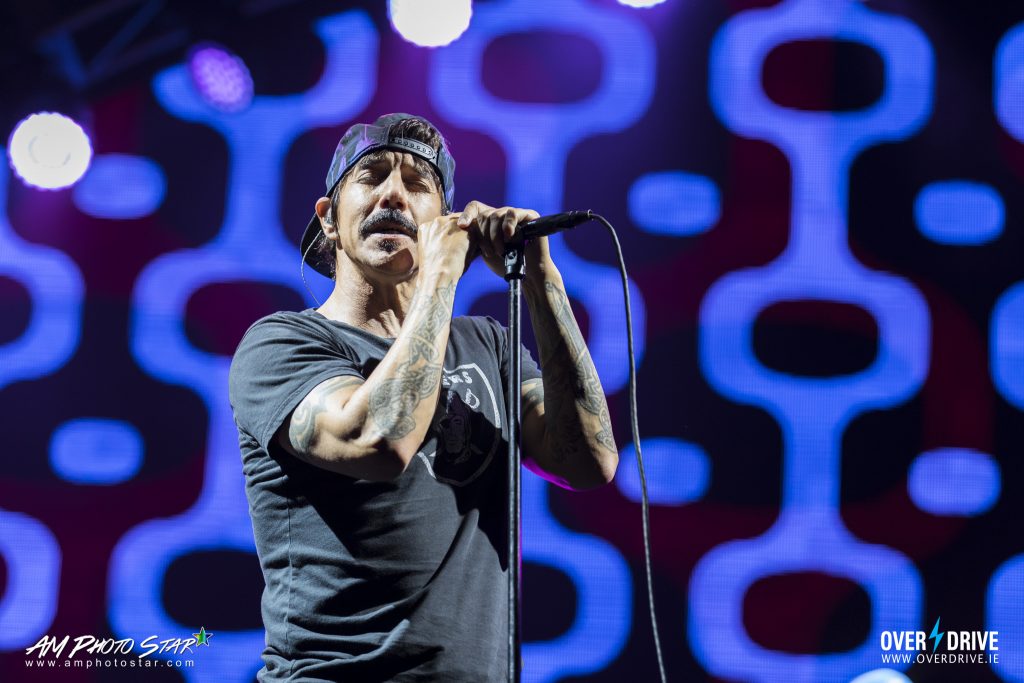 There are some bands that just connect with to a vast amount of multi-genre music lovers. Bands that have a long rooted history that runs deep with generations of friends and family members. The Cure has it. The Smiths had it. The Pixies, Nirvana, Depeche Mode, and more recently, the Foo Fighters.

I’m talking about that X-factor that can bring electronic loving fans together with the cool indie hipsters, rockers, kids and even the jumper-wearing parents to shows, where, for just a moment, they all share one common interest. Red Hot Chili Peppers are one of those bands.

Last night (Wednesday, September 20th) Red Hot Chili Peppers took to the stage in Dublin’s 3Arena, the first of a two-night stand, to fulfil their original dates from last December shows which were cancelled due to Anthony Kiedis being unwell and unable to perform.

With both nights completely sold out since December, the 3Arena was rammed to capacity by 9 pm and loaded a strong presence of excitement and electricity which was bursting throughout the venue in anticipation for the Californians to take the stage.

As the lights dimmed and a saxophone jazz medley pumped out across the arena’s PA to deafening roars, drummer Chad Smith, bassist Flea and guitarist Josh Klinghoffer took to the stage and proceeded to knock out their infamous ‘intro jam’ to warm things up. 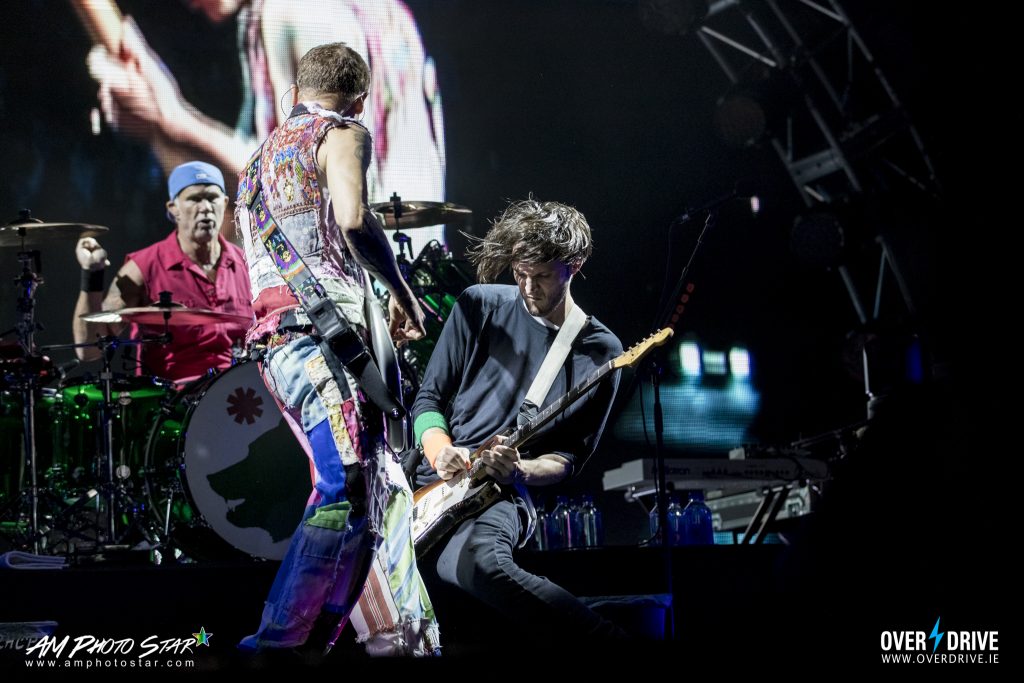 After the initial impact of their arrival on stage, the reality of the opening performance became a little stagnant very quickly, with a desired sense of urgency for the show to actually start taking hold.

Almost five minutes later, Kiedis appeared from the wings as the band launched into ‘Around The World‘ much to the delight of the area’s capacity, who didn’t seem to notice that the tempo was sluggish and at times dragging in parts.

This continued with a number of tracks from the setlist which glided in and out of moments of greatness dampened with a disconnected and at times almost uninterested presence from the band, who incidentally, performed as a six-piece with a pianist and a totally irrelevant percussionist! Why would Chad Smith need any assistance is beyond me, as the man is more than capable of doing a stellar job all on his own.

As the flow of punters began to flock to the bar and use the facilities, the show continued with a wafer-thin rendition of ‘The Zephyr Song‘ followed by ‘Dark Necessities‘ and ‘The Adventures of Rain Dance Maggie‘, all of which seemed to be dialled in by the band, regardless of Flea’s hyperphysical work-out. 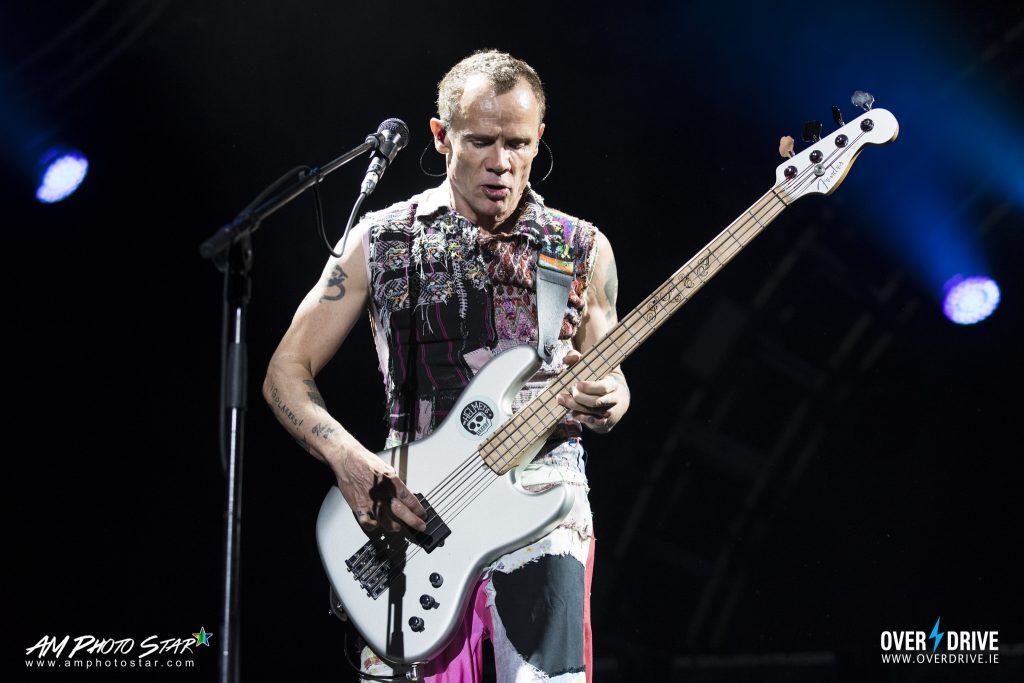 Don’t get me started on The Stooges cover of ‘Search and Destroy‘! For the most part, the blank look upon most of the younger audience members faces was entertaining in its own right and although tonight’s rendition came across sloppy at best, I have to give credit where credit is due for the bands attempt to broaden the minds of their audience with some stone-cold classics every now and again.

Things seemed to slot into place by the time we get to mid-set with ‘Parallel Universe‘ which galloped from the arena’s PA, displaying the first signs of the bands engine working on all pistons. 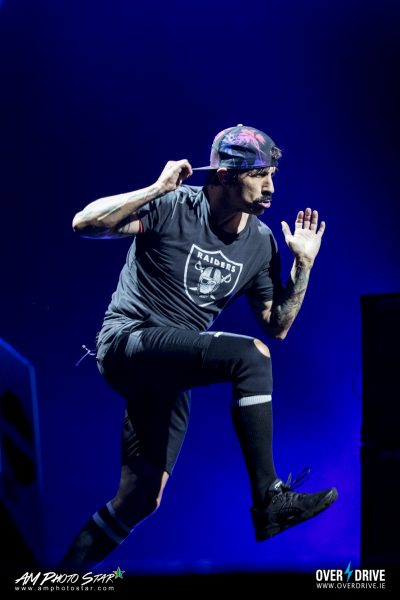 More tracks from the bands latest release ‘The Getaway”  it’s apparent from the reaction of the audience as to who is new to the Chili’s camp. With a peppering of classics such as ‘Californication‘, ‘By The Way‘ and ‘Suck My Kiss‘ mixed in with the likes of ‘Dreams of a Samurai‘ the audience (both young and old) seem sufficiently engaged, however, a million miles away from a tractor-beam performance the band are capable of executing from time to time.

We all know it’s impossible for most bands/artists to maintain the same level of consistent relevance twenty or thirty years into any career, however, there is no denying that Red Hot Chili Peppers have become a cotton wool, mid-life crisis version of their former selves and as they continue to venture into the soft-furnishings department of contemporary radio-friendly jingle-jangles, the one thing they should never drop the ball on, is their live performances.

An average performance at best, that never truly lifted the 3Arena’s roof, however, momentarily loosened the moss from its gutters. 2.3/5

Photo – AM Photostar © 2017 exclusively for Overdrive.