Continuously pushing boundaries and cross-pollination genres with their own unique electronic/progressive interpretations, RESTIVE NATION continues to surprise with ‘I’m Sorry’.

‘I’m Sorry’ sees the band take a dark and melancholic journey into a hybrid of Massive Attack and Nine Inch Nails with a side of Crosses /Tool floating in and out of a dream-like, post-punk daydream.

As an isolated new track [not featured on their recently released ‘Lucidum’ EP], ‘Im Sorry’ shows the band venturing into darker landscapes, exploring the inner-working of the human psyche, thanks to the chilling vocals of Dave Lee of Irish Heavy Progressive crew, Raum Kingdom.

The band commented on the track:
“I’m Sorry is a track that was written by Dave Lee’s solo project Sombre Motion in 2012. Dave [pictured below] would go on to form the heavy as f**k Raum Kingdom in 2013. We collaborated with Dave before on our 2017 single ‘Murmur’ and while we were working together we came across his hauntingly beautiful track ‘I’m Sorry’.

Upon hearing it we just had to have it as part of the Restive Nation repertoire. We asked Dave if we could adopt it into Restive Nation and he was more than happy to oblige“. 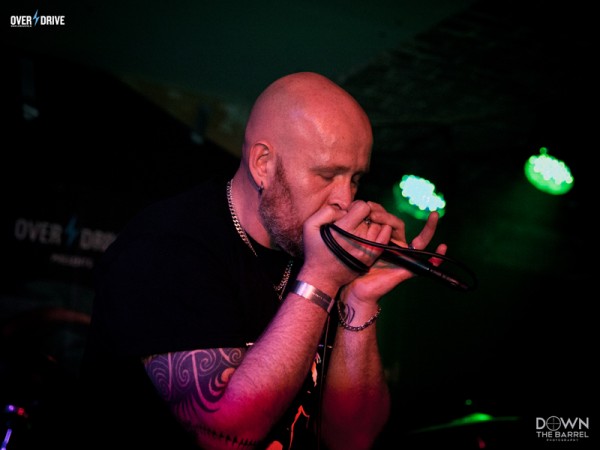 About the lyrical content Dave said: “It’s about doing wrong so much that even when you’ve done right, you still have to eat the blame”.

This song marks the end of an era for Restive Nation as it is their last musical collaboration with an outside artist for the foreseeable future.

OD – The new single/video, ‘I’m Sorry‘ is out today, can you tell us how long that song has been circulating in the band as I believe it’s been in existence for some time now?

Chris Cahill: It’s something that’s taken a lot of effort to put together. The original track was on Dave’s SoundCloud and it’s one that I was constantly listening to so we had to do our own version. It’s been in the works for the last few years sitting in its pre-production phase. We only finished the final mix quite recently though so it sounds pretty fresh for us.

OD –  Dave Lee from Raum Kingdom features on vocals, how much influence did Dave have on the finished track?

Ciarán Timmy Lynch: As Chris said, it was originally written by Dave and the song is actually older than Restive Nation! He wrote it on Reason (software for creating electronic music) and we didn’t change much regarding the structure, all we did was layer live instruments over his programmed tracks so the end result really is 50/50 between us and him – most of the synth & programming you hear on the track was done by him and we kept his original stems because we love how they sound.

OD – The video can be interpreted in a number of ways but can you give me your translation on the concept?

Chris Cahill: The video is the director (Tom Maher’s) vision and artistry but my personal translation is that the story shows the inner turmoil and the decay of someone on the edge. The hand over the eyes represent the internal switch the main character chooses to end it all.

Ciaran Timmy Lynch: We don’t want to give too much away at the moment but we are currently in and out of the studio on a regular basis recording a load of new material, all of which will see a 2021 release.

In typical Restive Nation style there are a plethora of genres being explored and we’re really opening things up with a crazy amount of input from our 3 vocalists. All pistons are firing and it’s very exciting.

OD – Despite this being a totally bizarre year, Restive Nation have been very busy with the release of the EP and a slew of singles/video etc. Have you noticed a greater interest in the band since the EP’s release earlier this year?

Ciarán Timmy Lynch: Yeah, in terms of recognition this has certainly been our best year. We were extremely lucky to have had our EP Lucidum completed before the pandemic started.

The downtime allowed us to really give the promotion side of things some much-needed attention and the EP got some amazing coverage across Europe and North America. This really encouraged us and gave us the drive to keep up the momentum and to remain relevant and to keep releasing stuff. We have a couple more tricks up our collective sleeve planned for the rest of the year.

OD – If you were to describe the music that Restive Nation creates for someone who has never heard of you before, how would you go about explaining that?

Chris Cahill: Our music is a unique blend of electronica and progressive rock. Our music spans many genres and influences so we always keep the listener guessing. The use of different voices are the key elements of attack for those different genres.

Regarding the video for I’m Sorry;, the band commented:
“We thought it would be cool to give the track to Dublin-based independent filmmaker Tom Maher for his own artistic interpretation. Usually, we’d be very explicit about what we want when it comes to themes, but we were keen to see how Tom would exhibit the track visually and we absolutely love this slow-burn tension piece; it’s completely different to anything we would have dreamt up and it’s a great representation of how well things can go once you let go and relinquish control.”

‘I’m Sorry’ is released today and will be the final single/video from the band before a series of new material which is scheduled to be released in January 2021.