Jaret Leto and company brought their large pop/rock performance to the Irish capital minus guitarist, Tomo Milicevic. Get the full report below; 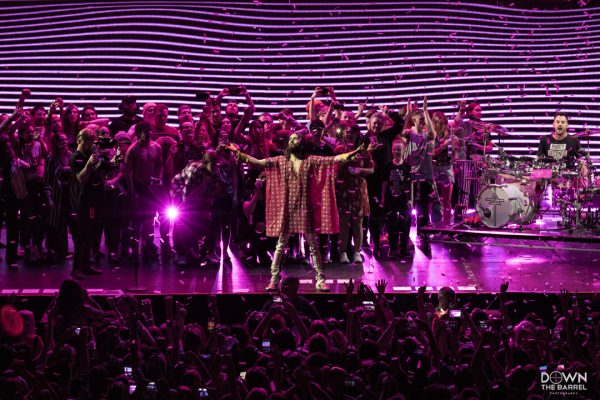 Having previously seen Thirty Seconds to Mars twice, on the Into the Wild tour in 2010 and the Love, Lust, Faith and Dreams tour in 2013 I was looking forward to a night of their brand of experimental electronic sounds mixed with the guitar-driven rock that brought me to them in the This is War period.

The fact that lead guitarist Tomo Milicevic has left the tour, citing ‘personal matters’ should have been a warning sign but hey, Jared plays the guitar right? So, he’ll pick up the slack and it’ll still be a great rock show. Not exactly. This was by no means a bad show, but I’ve definitely seen Thirty Seconds to Mars in much better form and putting in way more effort.

With drummer Shannon Leto positioned to the right of stage, and touring band member Stevie Aiello on bass and keyboards so far right he is almost off stage, singer Jared Leto has two thirds of the 3Arena’s massive stage in which to whirl and twirl, but with absolutely no set other than a video screen behind them the band is left looking somewhat lost in the empty space. 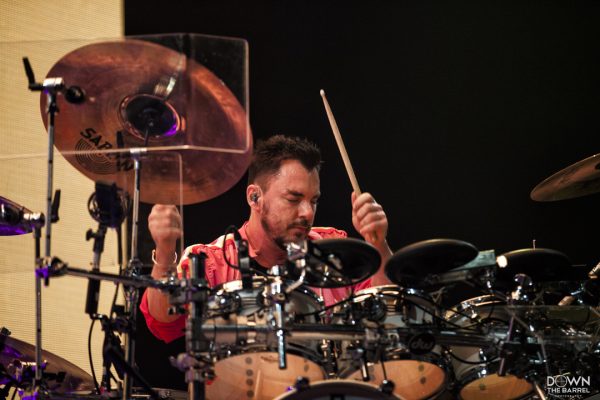 Actually, for the first few songs, it is impossible to even see the band, as the video screen, and a giant strobe running underneath it, backlights them so much they’re nothing more than silhouettes.

The show starts with the Monolith intro from new album America, but the new album is then ignored for a while, as they play Up in the Air from Love, Lust, Faith and Dreams, followed by Kings and Queens, Night of the Hunter and This is War from This is War. The band is absolutely on point, Jared’s voice is as good live as it is on the albums and the jumping, roaring crowd is clearly having a great time.

I have to say though, I miss the guitars, and the fact Jared is wearing massive gold, sequinned gloves is making it clear he has no intention of picking one up. 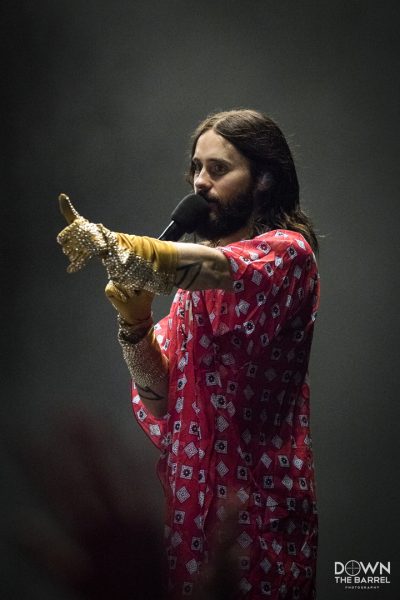 At the end of This is War, loads of massive, silver balloons are released into the crowd and at this point, I figure out exactly what it is I’m watching. It’s the 2013 show all over again. The Monolith tour, in support of America, is basically the Love, Lust, Faith and Dreams tour rebranded.

With the minimum of effort, no set, hardly any lighting bar the video screens, which actually do more to hide the band than show them off, and the exact same highlight moments as the previous tour, Monolith is no more than a previous tour rehashed with some new songs thrown in.

It’s a shame because America is actually a very good album, but Tomo is missed terribly and Shannon and Stevie, even with the amount of sampling used, have no chance of making the songs sound as good as they do with live guitars. I couldn’t say why, but at some points, they’re even using drum samples while there’s a perfectly good drummer with a huge kit right there on stage.

The show continues with fans being invited on stage for a chat, before Do or Die, Hail to the Victor and Pyres of Varanasi. This is followed by a cover of Rihanna’s Stay. Jared stops his constant whirling around the stage, gets a mic stand and stands still and just sings, and it’s very good.

I have to say for the sake of clarity, my problems with the show tonight are largely based around the production, and the fact the tour even continued without a crucial member of the band, but the performance is strong, Shannon and Stevie are working like Clydesdales to fill in the gaps and Jared is as strong vocally as he has ever been. 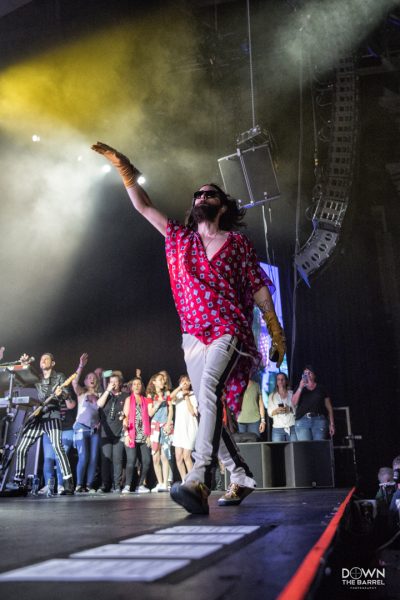 His performance of Stay shows that, as a cover version can often be the moment in a show where the fans lose interest and that doesn’t happen here. Next up is Great Wide Open from America, which is described as a sister song to City of Angels, which we’re treated to a few bars of.

A couple of guys are now invited up on stage to show off the Irish accent, and to introduce the next song. Jared indulges in a few minutes banter, which is great for them but slows the whole thing to a stop and isn’t that interesting for the rest of us. The next song though, is The Kill, one of their best and a great singalong track for everyone. Rescue Me finishes the main section of the show but rather than leave the stage before the encore Jared invites a group of fans onto the stage for the finale, which consists of Walk on Water and Closer to the Edge.

A final flourish clouds of confetti are fired into the air, turning the 3Arena into a snowy winter wonderland on the hottest day of the year so far. 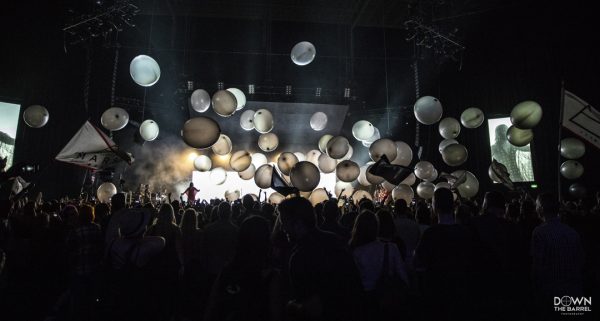 To conclude, while this was by no means a bad show, I’ve seen Thirty Seconds to Mars in much better form. The loss of Tomo is hopefully temporary as he is sorely missed. The whole show had a feeling of having been stripped to its bones, and the flourishes that were added were rehashed from previous tours. That said, the three musicians are very good at what they do and the performance, while strained, was at a high level. 3.5/5

Gallery – Down The Barrel Photography courtesy of MCD Productions © 2018