After a career spanning almost 35 years, American rock n’ roll godfathers Aerosmith are reportedly calling it a day, and are stopping by Ireland to say a fond farewell at Dublin’s 3 Arena. This concert sold out a very short time after it was announced, and Overdrive, thanks to MCD Promotions, sent Shaun Martin front and centre to bid Aero-vederci to one of the most influential bands of all time. 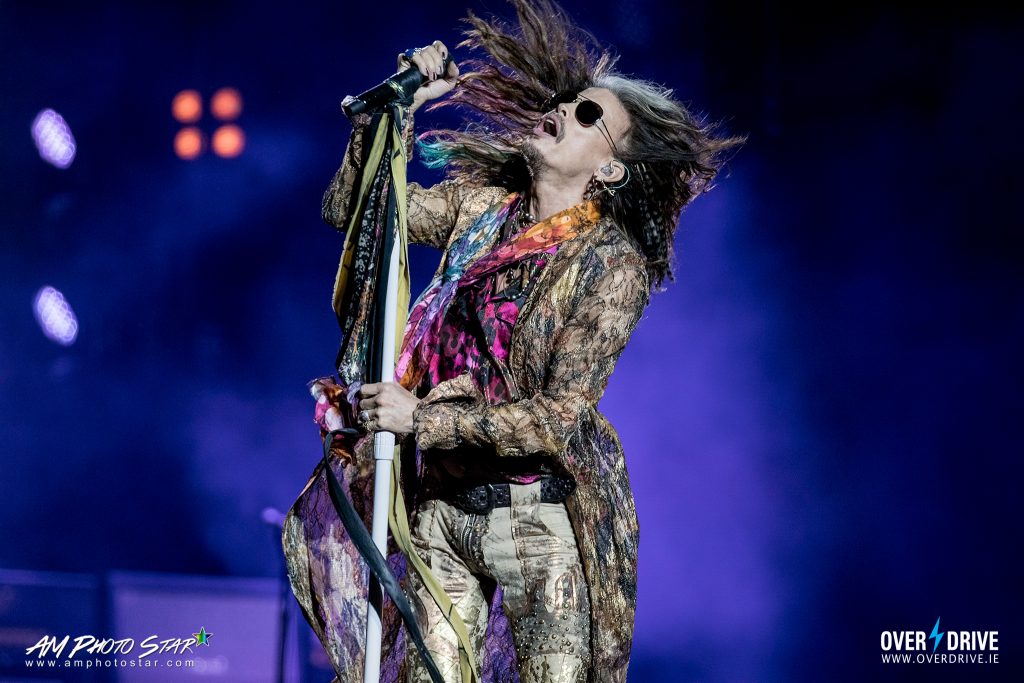 The lights are all down low as Tenessee hard rockers Tyler Bryant & The Shakedown put the head down and run headlong onto the stage at Dublin’s 3 Arena to open up tonight’s once-in-a-lifetime spectacle. Frontman Tyler Bryant is a showman to the core… he bounces around the stage like he owns it, and the songs come from the gut.  TBTS’ Southern bluesy sass meets good time-y, foot-stomping rock n roll, and the entire band are in the comfort zone.

Bryant creeps between left and right sides of the stage to greet the audience,  but he does it in that old, 1980’s slick rock n roll style where the music is flowing through him rather than from him. Bryant also has the lead guitarist skills and personable prowess to be a great bluesman in the league of the late great Stevie Ray Vaughan, although much heavier.

To prove this, TBTS  chuck out a classic Muddy Waters cover ‘”Got My Mojo Workin“. It’s a long-time favourite, and TBTS give it a heavy, crunchy, blues/rock makeover, to allow Bryant to shred all over it.  After this nostalgic twist, Bryant breaks out his Duolian for a duet with just him and drummer Caleb Crosby, after which Crosby jumps out from behind his kit carrying another bass drum to pound on it in front the of the audience as guitarist Graham Whitford and bassist Noah Denney hit the maracas and tambourine. Bryant addresses the crowd repeatedly, stating that Aerosmith was a big influence on the band, and you can actually hear the sick licks in their tunes, It’s a real eye-opener that bands like this are still going strong, and long may that continue. 4/5 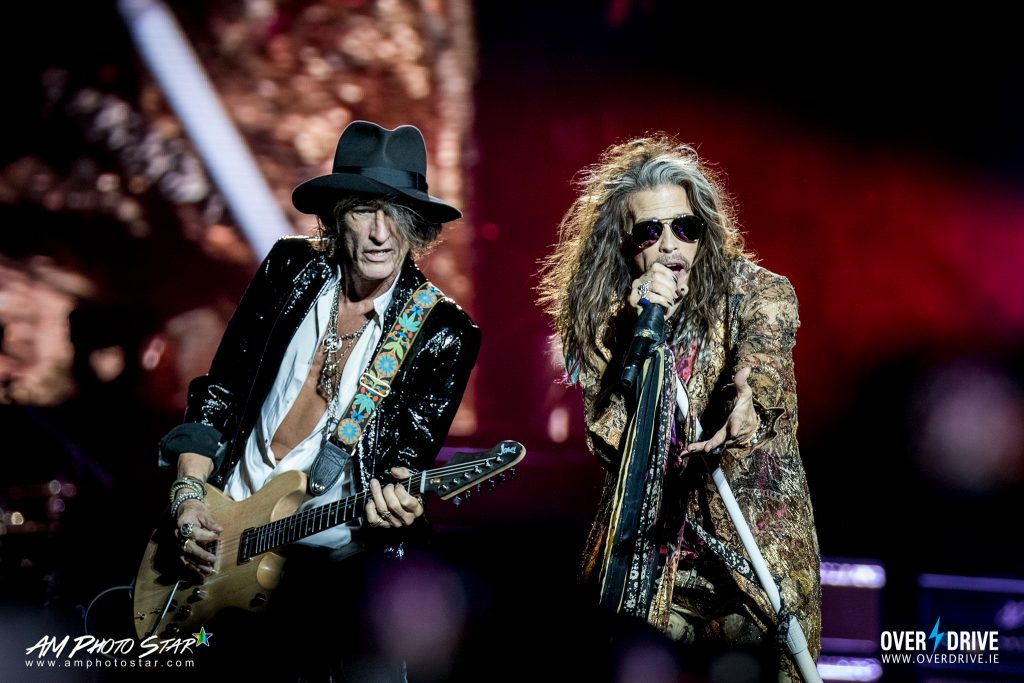 Watching the roadies run amok getting everything ready for tonight is kind of awesome.  One of the biggest rock bands in history is saying goodbye to Ireland for the last time. Backed by the entire to “O Fortuna” from Carl Orff’s Carmina Burana, we see a series of photos and video outtakes from the band’s long journey starting in 1973, Aerosmith led by the legendary Steven Tyler and the immortal axeman Joe Perry appear each side of the catwalk projecting from the stage. One Tyler-crazed guest manages to slip past security and follows him up on the stage with go-pro in hand… but Tyler being the ladies’ man, takes her in his arms and gives her a goodbye kiss she won’t forget in a hurry!  Let’s get this show on the road folks!

It’s basically Steven Tyler and Joe Perry in control here for the night. Soaked in sleaze, Tyler pushes the 3Arena’s boundaries with his gyrating and general misbehaviour that has earned himself a legion of fans around the globe spanning a career of almost 35 years. The first 30 minutes is blitzed by old time greats like ‘Crying’, ‘Living on the Edge’, ‘Love in an Elevator (during which, Tyler throws in a cheeky verse of ‘Lady Madonna’ by the Beatles). All the while, bassist Tom Hamilton strides around grinning like a Cheshire cat. 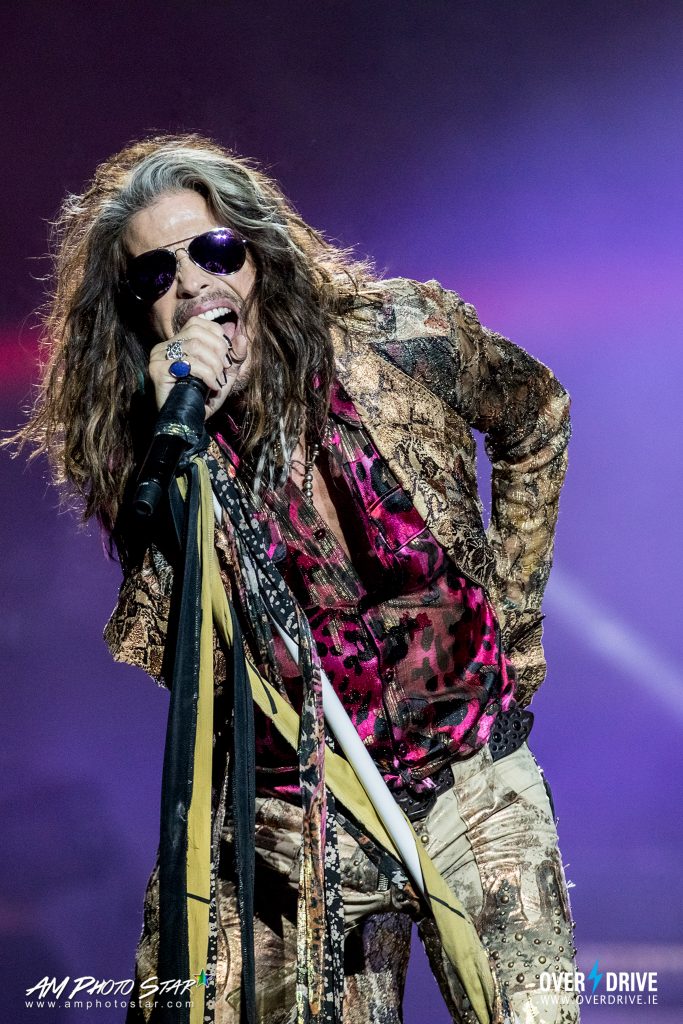 There are times that Tyler looks tired throughout his hip-thrusting and fleet-footed shenanigans (and nearly knocks over his cameraman), but they are (reportedly), saying goodbye to the world, and I guess Tyler wants to go out on top. Tyler turns the mic over to Perry for a ‘Boston Boogie’, whilst Tyler rides shotgun on the harmonica. Tyler lives up to his legend of mischief by sarcastically encouraging those present not to do anything he wouldn’t do (which is a pretty small list, to be honest). Tyler and Perry unit up front and centre again and again, and as Perry pulls out his Duolian, things take a Southern rock twist with a few Fleetwood Mac covers ’Stop Messin Around’ and ‘Oh Well’. 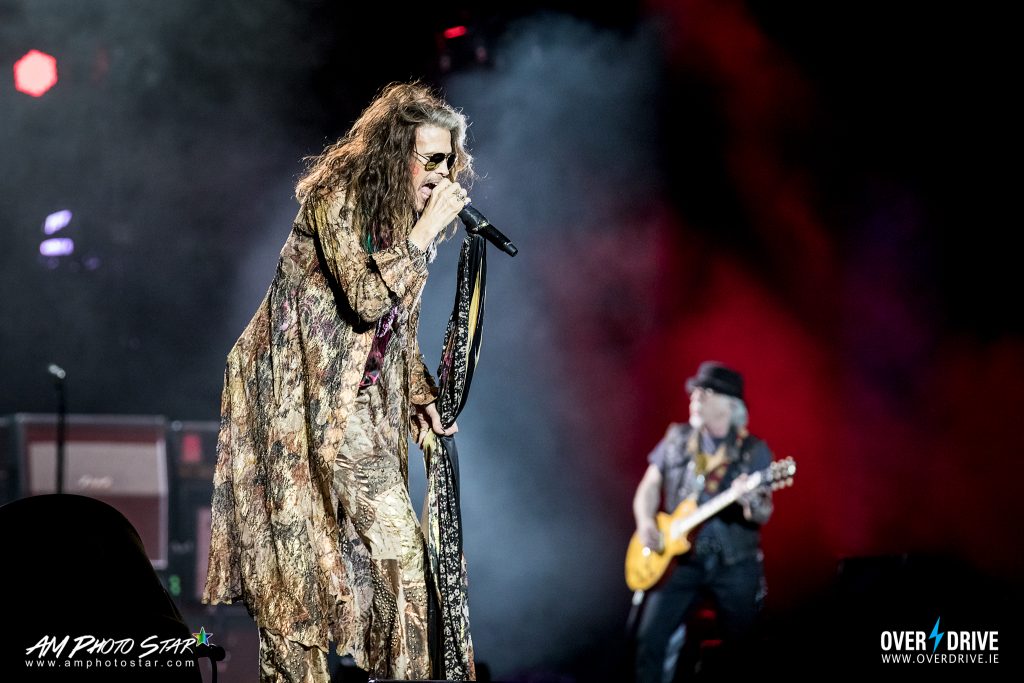 Joey Kramer is unfortunately well-hidden up on the drums and Buck Johnson supplies the keys, (and all manner of special effects), and when ‘I Don’t Wanna Miss A Thing’ comes on, Johnson is the star, blending what sounds like a symphony orchestra into just a few strokes of the keys. Tyler can still hit those high notes though, albeit not for the amount of time that he used to. Perry pulls out the electric slide guitar for ‘Ragdoll’, but then John Lennon’s “Come Together” gets a delivery that is jointly sung in unison by this sold out crowd of 9,500 people. 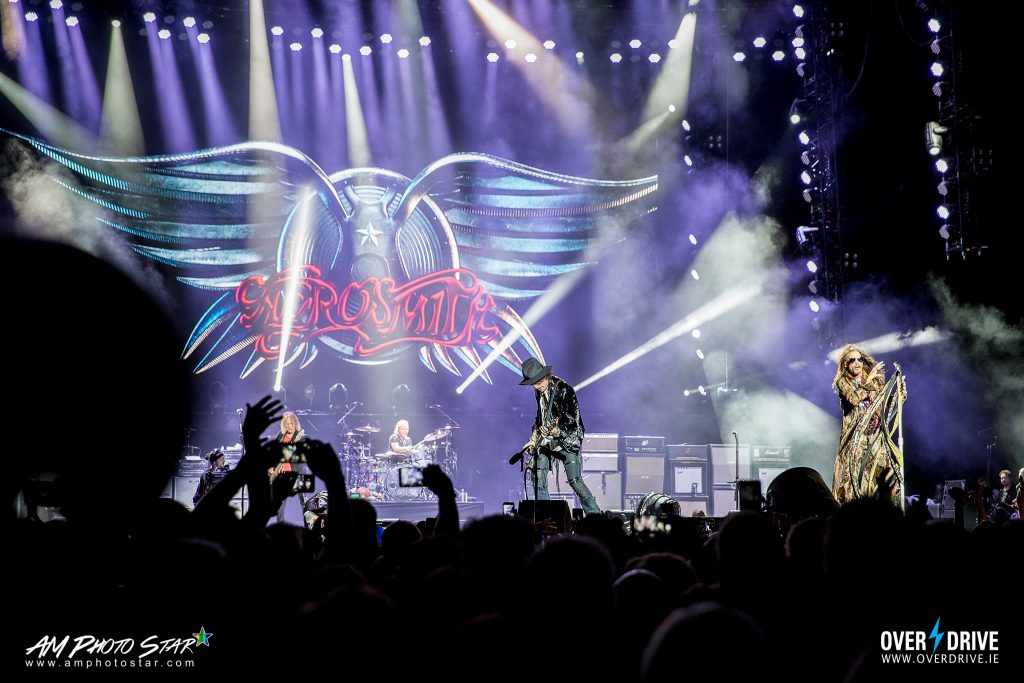 As the encore pause begins, you can see roadies bringing out a grand piano to the centre of the catwalk… plus some steps – that has to be difficult when the lights are that low! But I’ll come back to that later.  Tyler reappears and thanks us all for being here throughout a tough year for music. We leave the outside world outside and celebrate music together. Tyler sits at the piano and gives a verse of “Will you still love me Tomorrow” by The Shirelles, before levelling us with Dream On, during which Perry makes use of those steps and solos us out of the immortal classic number. Tyler then climbs said piano, points to his right earpiece as he seems to have lost the sound, but after this, the same piano is then carried off the stage again (That’s extravagance folks!). Finishing the night with the unstoppable “Walk this Way“, Aerosmith bid us aero-vederci and wrap up their Irish story. 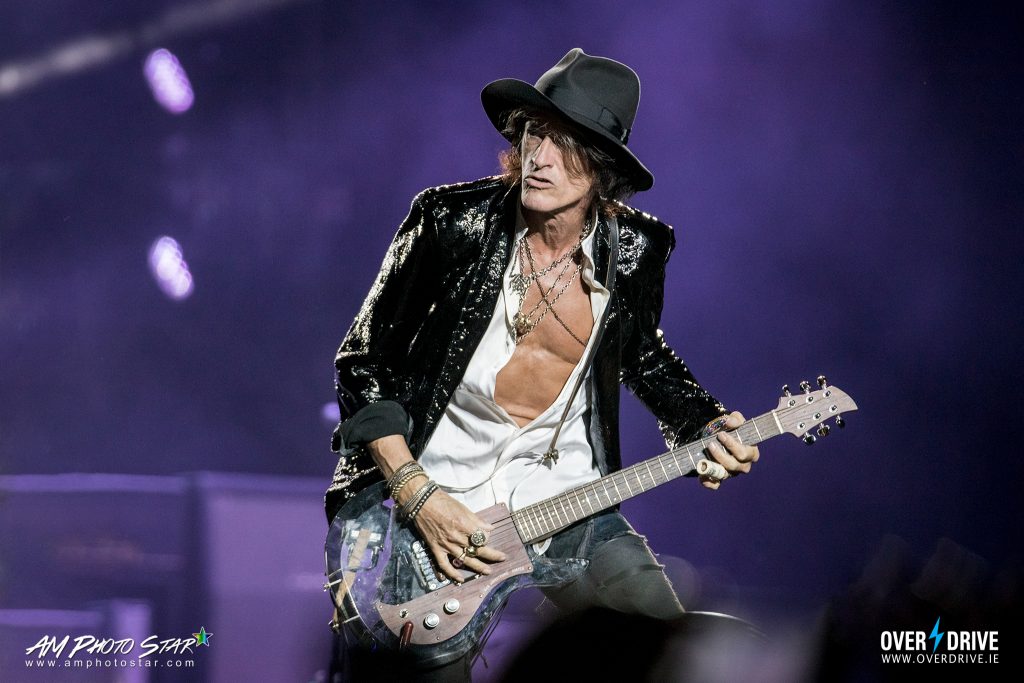 There has been a lot of talk over the last few months as to whether or not this is truly Aerosmith’s last ride. I’ve seen a few farewell tours, and there’s always a long drawn-out goodbye and thank yous to a lot of people. Other than the regular thanks to everyone for coming, there was no long goodbye. This leads me to think that maybe we’ve not seen the last of Tyler and his crew. 4/5

Let the Music Do the Talking

Livin’ on the Edge

Love in an Elevator

Janie’s Got a Gun

I Don’t Want to Miss a Thing

Come Together (The Beatles cover)

Credit: AM Photostar © 2017 exclusively for Overdrive.