Who would have thought it? Alien Ant Farm headlining Dublin’s Academy in 2018? The renaissance of the 00’s chart-toppers continues to step out of the shade and bask in the warm glow of the stage lights once again. Coming along for the ride are Chicago nu-Metal poster boys, Soil and guitar-heavy rock duo Local H for their debut performance in Ireland. Let’s get to it, shall we? 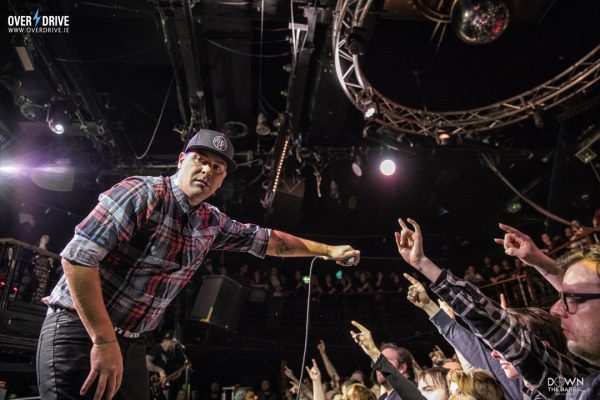 What better way to celebrate Valentine’s Day than with a very interesting mix of bands hitting the Academy.

Actually, with Anvil playing in another room in the same venue, it’s the place to be tonight, and many others thought so too as both shows had very healthy turnouts.

Opening are Local H from Illinois, making their Irish debut and being honest they left me a little flat. Having seen a number of bands in recent years that have just guitar/vocal and drums, although I have often enjoyed their album releases very few of them have actually hit the spot live. 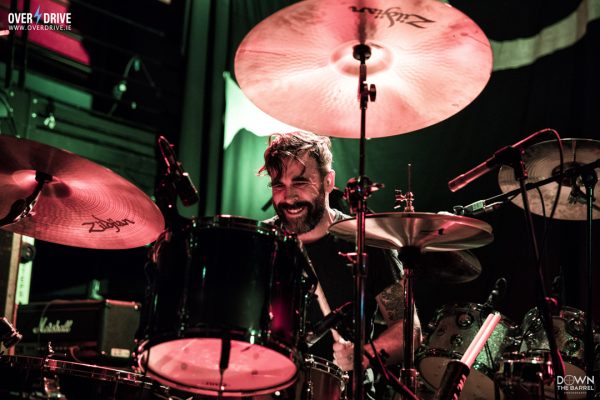 The particular brand of punk-infused rock is fine, well played and they manage to vary the pace of the songs enough to avoid everything sounding the same, and although starting their set to a sparse crowd there are visibly a number of those in attendance singing along to each song, which is great to see early at any show.

Highlights from the set for me are ‘City Of Knives’ and “Bound For The Floor” which sounds very different to the album version when you don’t have that thumping bass line, but they make up for that with a little-added aggression in the mix, and it sounded great. The guys are very much in sync with each other through the set and the punch and power from the drums is great. On a different night, perhaps it would have clicked with me a lot better. 3.5/5 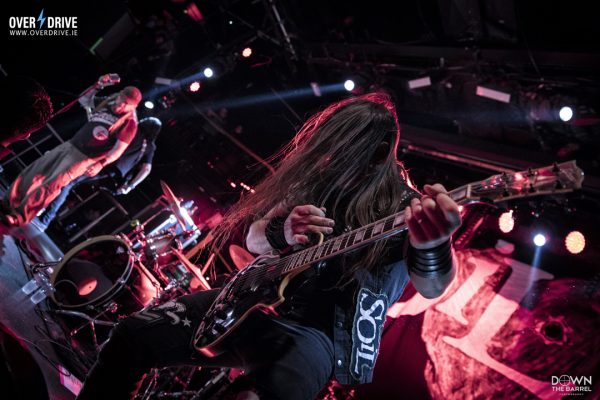 Next up are the band I was most interested in seeing this evening SOiL, they have always been one of those bands draw as many haters as followers, but they have also created a stand out track from their era in ‘Halo’, it’s very widely recognised and for good reason. During the early part of the set Ryan perhaps engaged with the crowd a little too much, the stories seemed to go on a bit, and it wasn’t helping the flow of things.

The set really picked up from halfway when ‘Pride’ kicked straight into ‘Black Betty’, at this stage the venue was pretty full, which helped the atmosphere, and as the set progressed so did the singing. It is a little odd during a support slot to wheel out a cover, but if it’s something that lifts the energy then what the hell, go with it.

The highlight of the set was always going to be ‘Halo’, but when Ryan spent practically the whole of the song in the middle of the audience, and as you often see with an Irish audience, the fans gave him respect and enough space to keep singing, while continuing to bounce, dance, mosh around him. 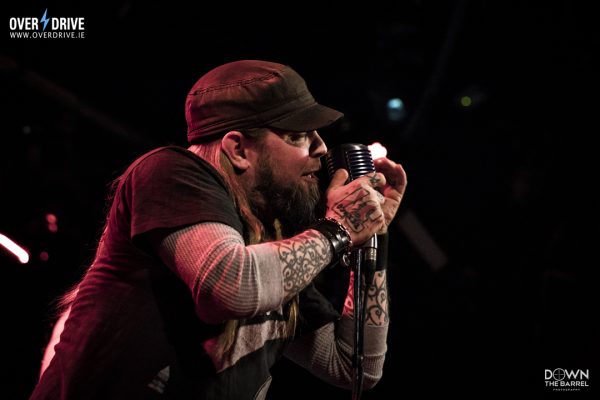 SOiL put on a really good set, and hopefully, we will get to see them back doing a headline show soon. Would still be interesting to see them back with a 2nd guitarist to beef up the sound a little. 4/5 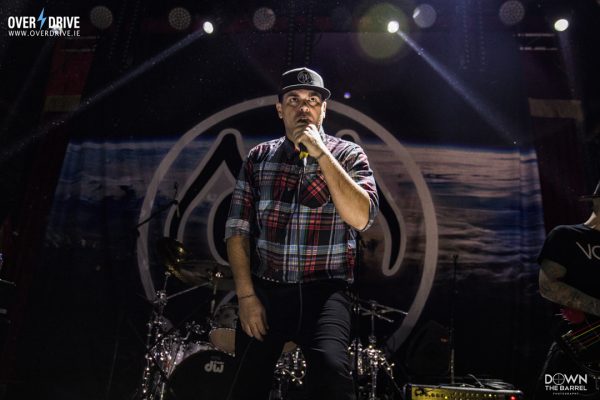 Onto the headliners and Alien Ant Farm are so different to the sound of SOiL, as in turn, they’re  so different to Local H, the variety is interesting, but not always for everyone, and it was noticeable that some bodies had made an early exit.

As for the band themselves, well there were plenty of fans in the crowd, and others were likely there just to hear one of their main hit songs, ‘Movies’, ‘These Days‘ or the excellent Michael Jackson cover, ‘Smooth Criminal’.

AAF’s frontman Dryden Mitchell is interesting, still can’t work out if he is one of the most awkward frontmen ever or it’s all just an act, he’s certainly funny and knows how to bring the crowd into the show with him, while being vocally spot on. The band, at times, give the impression that they are about to get heavier, with little drops of hardcore roots floating through the music under their rock/pop punk. 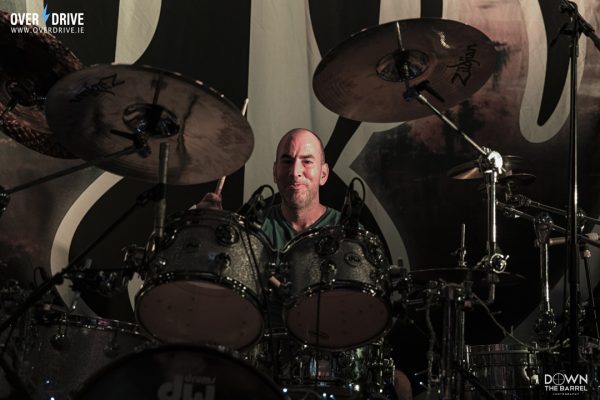 At the end of the day, it’s all wrapped into a Pop Punk fun vibe. The set is a little bit scratchy in places, so pitching ‘Movies’ as the 3rd song, was interesting, however, did the job intended as it got people moving. It must be said that it was a little strange to see more crowd action for AAF than there was for SOiL. It’s getting harder to read people. 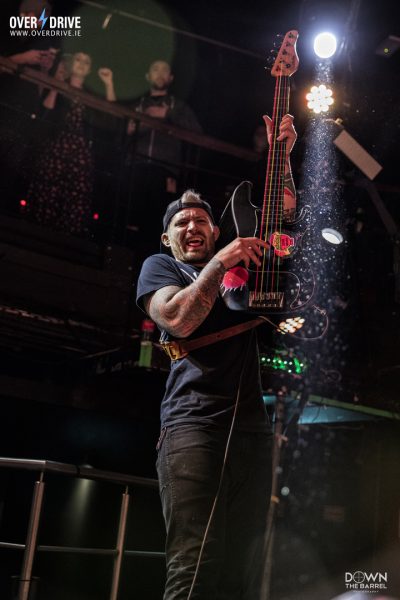 Tonight’s pretty much a Greatest Hits set, and they seem to be really enjoying themselves along with the fans. Dryden makes plenty of contact with the front row as the show develops and takes the edge off the proceedings from the get-go.

Bangers, ‘Forgive And Forget’ and ‘These Days” are met with mass jumping from the Academy punters, which provides for good atmosphere, regardless of whether you dig the band or not. One thing I do find strange is that some of their songs sound a little lighter than they do on album, usually the other way around, but that’s their vibe, they do kick things into gear when needed.

‘Attitude’ – one of the bands better tracks is introduced as a “one Chester Bennington’s (Linkin Park) favourite AAF track’s”, which was met with a tip of the hat to ‘In The End‘ which was a nice, subtle tribute to the late vocalist.

Apart from a few minor technical issues, AAF do a stellar job in holding the near sold out capacity in the palm of their hands before dropping ‘Smooth Criminal’.  It’s a terrific cover song, and judging by the crowd reaction and the band it would be a surprise if these guys aren’t back again soon. 4/5
Setlist

What I Feel Is Mine

Attitude (ending with ‘In The End’ snipped by Linkin Park)

Photos – Down The  Barrel Photography © 2018 exclusively for Overdrive.ie.