Time to live up to all the hype that’s been surrounding the New Zealand three-some that is ALIEN WEAPONRY, who tonight, will be gracing an Irish stage for their debut show in the country. Support from the mighty Dead Label and Words That Burn. 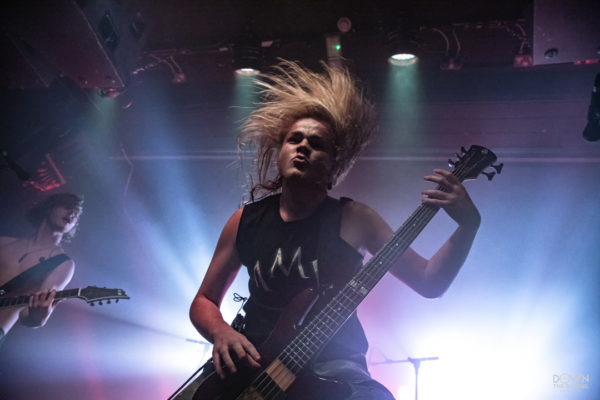 A sizeable crowd have made their way to the Voodoo Lounge for tonight’s debut Irish performance for Alien Weaponry but first we are treated to a set from Dundalk four-piece, Words That Burn.

Words That Burn have the opening slot for tonight’s action and fail to disappoint. The 4-piece metal-core supremos barrage our attention spans with a multitude of hard, heavy hitting riffs, soaked in edgy and bone crushing breakdowns.

Vocalist Roni MacRuairi holds the professional persona of a grizzled and seasoned frontman as they work their magic that has seen them become hot topics of late.  Hot off the latest record they released on Monday 10th of June (Pyres), their setlist is peppered with their newest songs. ‘White Smoke’, ‘Deathgrip’, ‘Riptide’ and their opening number ‘Mortal Call’.

Drumming breakdowns are the backbone of their punchy attacking style, pushing out an aggressive musical calibre that is no doubt going to serve them very well indeed. This is supplied effortlessly by Jason Christy. Guitarist Shane Martin supplies the chugging palm muted frenzied notage that forcibly makes you sit up and take note of this band.

Completing the lineup is bassist Ger Murphy, who keeps the tempo nice and complex, adding to the atmospherically feral beatdown that the Dundalk quartet are known for.  This brute force of  combined musical alignments are far beyond what lies behind mere interests in music the 4-man team pull their weight in equal measure and the hard work is evident. 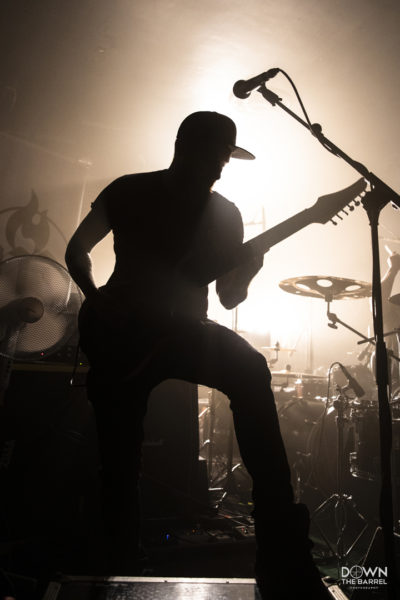 MacRuari couples soft, harmonious lyric undertones with high-impact death growl vocals to underpin the entire performance. Blend this with the talents of his instrumental counterparts and Words That Burn will etch themselves into memories long to be remembered. The night has only kicked off and the ears already bleed profusely! 4/5

Without even needing to sound check before they launch into “Are You Ready To Kill” for the opening number, Dead Label swing the sledgehammer into The Voodoo attendees. This is my first time seeing them with their new guitarist Mick Hynes who joins Danny Hall on axe duties, and it’s like a thirst of a desert suddenly quenched by a refreshing cold flood.

The balance is absolutely perfect as both have plenty of experience in this arena (Hynes having been drafted in from fellow Dublin underground metal-core titans This Place Hell). 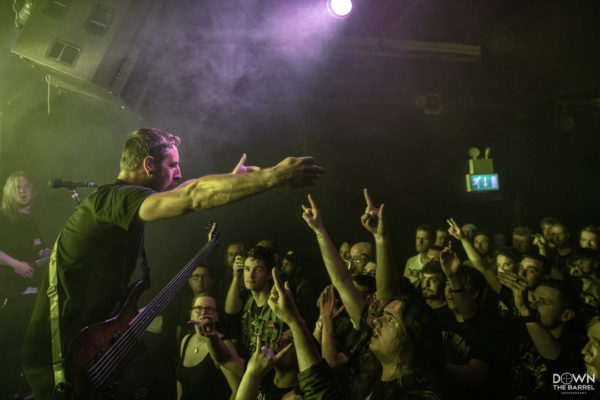 Bassist and vocalist Dan O’Grady is a force of nature in his frontman role. Ever the energetic showman, he holds the crowd in the palm of his hand and holds on for the entire setlist.

Petite drummer Claire Percival holds the machine gun drums mantle, and although she’s half hidden behind the kit, she makes enough noise to rival the best in Irish metal. There’s a reason Dave McClain (ex-Machine Head) GAVE her his drumkit… You don’t get that for pulling weeds at the weekend folks.

It’s sheer dominance and hard work oozing from the band, as it always has. The introduction of pinch harmonics found in the freedom of a second guitarist has knocked them into the next level of recognised acts in Ireland, and being one of the the hardest working bands in the business, it seems like a bright future is in store from the Celbridge gang. 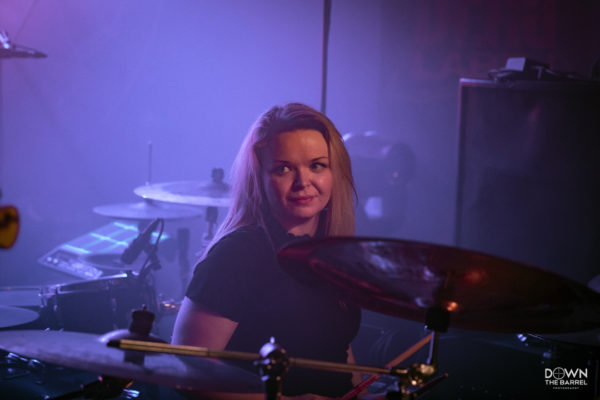 Their now-infamous ‘Wall of Chaos’ is a staple addition to their live shows, and O’Grady takes over cameraman duties to record the demolition of the crowd’s composure as they lose themselves in malevolent pit action. This was a superb choice for the support slot, and serves to heighten the expectation for the main event. 4.5/5 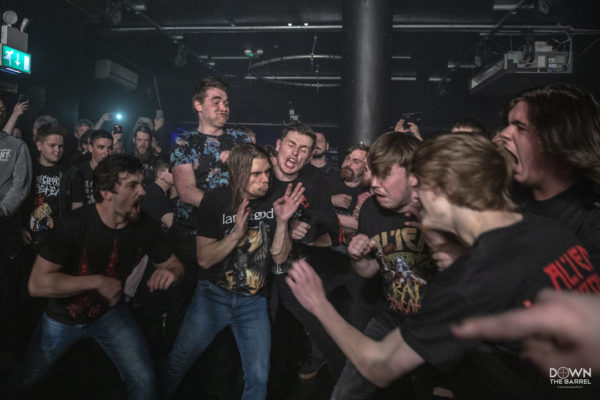 Far from their native land, three-piece Maori metal upstarts Alien Weaponry bring their native metal revelry to Ireland for the first time. It is truly glorious: from their opening number ‘PC Bro’ (which has its own haka demonstrated by drummer Henry de Jong), the warrior mentality can be seen on the the teenagers faces from the very start of the gig.

Bassist Ethan Trembath has a real ‘Steve Harris’ thing going on, in that his poise and activity onstage has every hallmark of a true pro and never stops moving for the entirety of the setlist.

Singer and guitarist Lewis de Jong (Henry’s brother), has that fun-loving youthful bewilderment appearance, but behind that visage lies the steel-hardened spirit of a true-blood musician channelling his Maori heritage into a new battleground of thrash metal, which is known for its ferocity and unyielding brutality to all who dare tread the path of the metal genre. 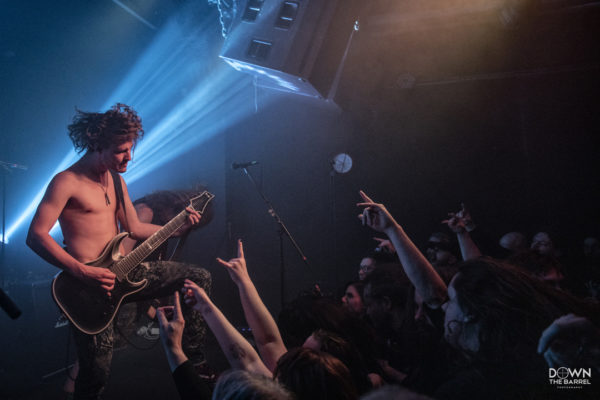 Only the fiercest and relentless will persevere and Alien Weaponry has the arsenal to do just that. Coupling Te Reo Maori with spoken English in their song structure, it unlocks a primordial door in each person in attendance: it has the effect of watching a UFC match in 3D, and boils the blood into a furious outburst of pent-up primal rage.

The Maori were known for their intimidation tactics on the battlefield and this is no different. Henry pounds on the skins like a wardrum as Trembath windmills his head inches from the front row faces. Lewis acts as the talisman, focussing the energies from his band into the atmosphere here tonight.

There is even a school friend in the crowd this evening, who is only known as ‘Bradley’, (who at one point crowd-surfs to the end of the venue LIKE A BOSS!), but Weaponry are also pretty humble in the fact that they are appearing in Ireland for the first time. They’ve always wanted to come here, and now they can say that they have played the furthest away from their native New Zealand.  We too, in Ireland, are proud of our Celtic roots (just ask Primordal or Mael Mordha, for example), and these boys are welcomed with open arms. 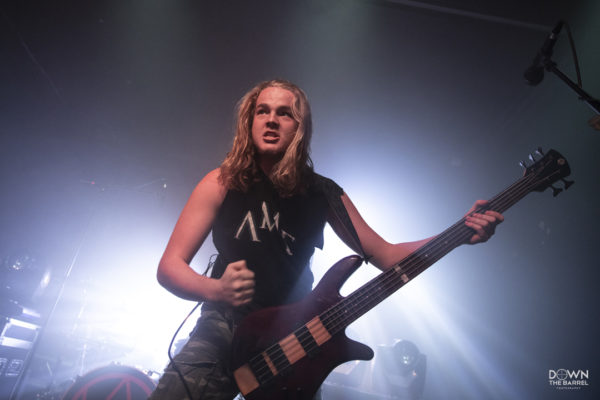 Lewis and Trembath swap mics repeatedly as the intense metal riffs cut gashes into the Voodoo lounge. Everyone’s head is nodding aggressively to their tribal thrash hammerings, and are unable to take their eyes off the stage.

Anger seems to fuel Weaponry’s songwriting fire, and although their riff structures are simple and easy to play, their delivery is nothing short of groundbreaking (there’s no need to reinvent the wheel – we know the wheel works: but when it’s on a Ferrari instead of a VW Beetle, there’s gonna be a serious improvement in delivery!).

The de Jong brighter have a real connection I the way they work off each other’s leads, and Trembath chimes in with a killer bass line set that drives their overall song structure home for all ears to get into. This is remarkable stuff for guys of their age, and this was a gig that will be talked about for years to come. 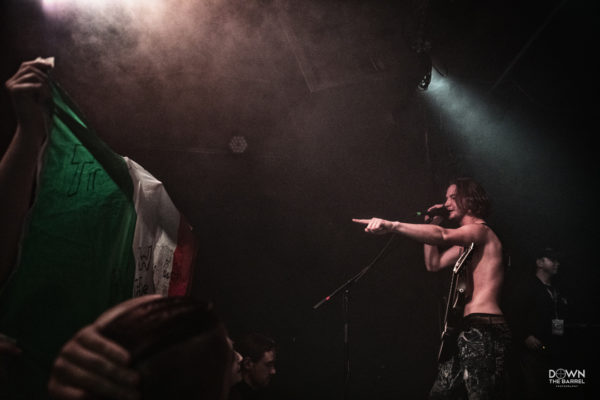 It’s a welcome breath of fresh air, albeit with the weight of a hammer to the skull. These kids have a rollercoaster of a career in their sights and it is already too long before they come back again. 5/5

The Things That You Know

Photo Gallery courtesy of Down The Barrel Photography © 2019

All photos – Down The Barrel Photography © 2019