This show has been circled on many a calendar since DME Promotions announced earlier this year. Three bands, that in their own right, are all masters of their craft, under one roof! It’s not every day a tour rolls into the Irish capital that sparks giddy-like reactions from grown bearded men, however, tonight it’s impossible to hold back the excitement! 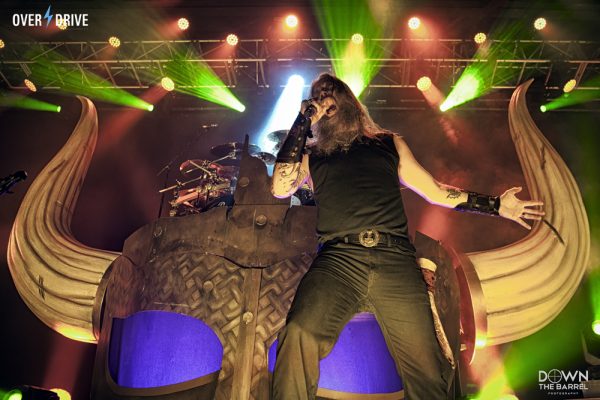 With the last few tickets (20 in total) being snapped up from Vicar Street box office, there really was no question that tonight’s show was going to be a sell-out. As a sea of black, band shirts slowly fills the dimly lit auditorium, the dominating banter that fills the air is obviously the return of Bay Area

As a sea of black, band shirts slowly fills the dimly lit auditorium, the dominating banter that fills the air is obviously the return of Bay Area thrash masters, Testament. This will be the band’s first performance in Ireland since their appearance with Judas Priest and Megadeth back in 2009 and to say that everybody is “up for it” is an understatement. 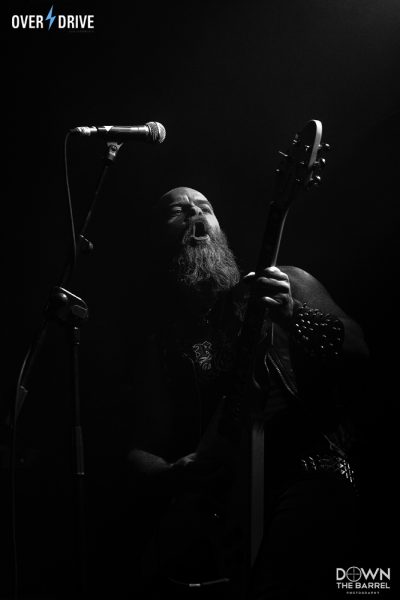 First up tonight is Stockholm natives, Grand Magus who grace the stage to the impressive crowd that bask in the glorious opening chords for ‘I,the Jury’ which come blasting from the venue’s PA. Sounding as crisp and clear as we had hoped for, Grand Magus throw down a setlist packed with top-notch old school sounding heavy metal.

Vocalist / guitarist JB controls the atmosphere with ease and confidence, as he reaches notes that most vocalist would struggle to touch on. Tracks such as ‘Steel Versus Steel’ from the epic Triumph and Power reign supreme, however, one of the highlights of the entire evening comes with the deafening crowd participation during ‘Hammer of the North’, which continues long after the guys have finished playing. Grand Magus are one of the most solid bands within the metal sphere right now and tonight they did not disappoint. I urge you to invest in their back catalogue and relish in their majestic brilliance! Fantastic! 5/5

With Vicar Street now bulging with excited punters, a murky green wash of glaring stage lights illuminates the stage as the San Francisco thrash legends take to the stage. A deafening roar lifts the roof as Testament tear into the title track from their recently released album Brotherhood of the Snake. 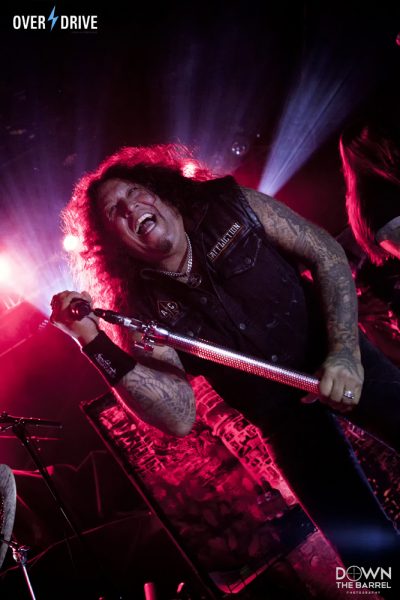 Sound issues harper the first half of the set, with Skolnick’s guitar, lost in the mix, while Hoglan’s kit peaks and drops unpredictably causing slight distractions. Gentle-giant Chuck Billy looks genuinely happy to be back in Ireland; after a long absence. ‘Rise Up’ gets the crowd moving, causing the venue’s security to “rise” to the occasion and with ‘Disciples of the Watch’ and classics like ‘New Order’ on the menu, a frenzy of bodies smash and crash into one another, just like it was 1986 all over again.

Amon Amarth’s huge stage production leaves very little for the San Francisco five-piece to fully utilise the Vicar Street stage, but no one seems to care tonight! Testament delivers a savage collection of tracks from their rich catalogue, all the while ripping up any preconceptions that they are past their prime. Skolnick, DiGiorgio and Peterson’s on stage persona explodes under the slime-green house lights, sending waves of euphoric friendly violence right into the beating heart of the Dublin pit. Testament’s return to Ireland has been a long wait, but one that was worth it, even if it was for the truly epic “Into The Pit’ and ‘Over The Wall’, which incite a plethora of crowd surfers who gleefully, float upon a sea of hands before, an altar of classic thrash metal. 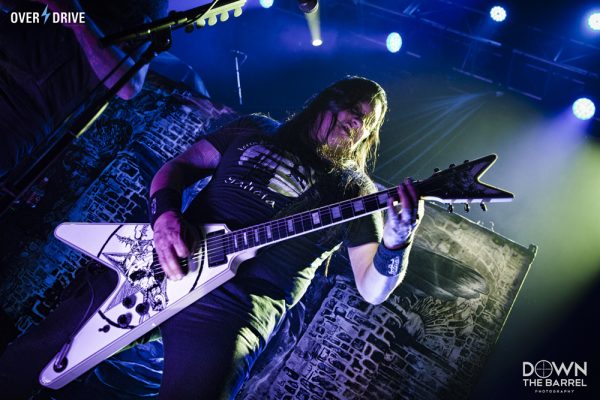 As Chuck notifies us of their last song and that we should be seeing Testament back on Irish shores in 2017, we are treated to one final blast of quality bay area thrash in the form of ‘ The Formation of Damnation’. 4/5

And so to the main attraction. Amon Amarth has established a healthy relationship with Ireland since their first pillage back in 2007. Having been together since 92′ Amon Amarth are only seeing the level of success that they so rightfully deserve in the last few years and judging by the deafening response tonight in Ireland’s capital, the Stockholm natives seem genuinely overwhelmed and enamoured by tonight’s sell-out crowd. 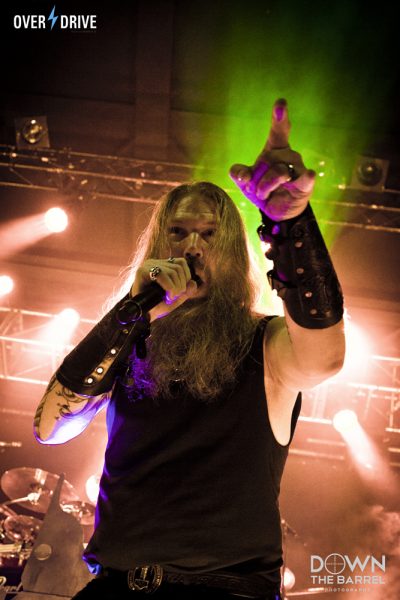 The production alone for this show is extravagant and metal-as-fuck! As a child of the 70’s growing up staring at the pictures of over the top, fantastic stage productions from the likes of Iron Maiden and W.A.S.P in rock magazines, this was ticking all the boxes for me. Opening with ‘The Pursuit of Vikings’, Amon Amarth waste no time in displaying their ability to own this stage tonight. Vocalist, Johan Hegg stands centre stage and proceeds to command a setlist of modern day metal classics in the form of ‘As Loke Falls’, ‘First Kill’ and ‘The Way of Vikings’. Every bit of tonight’s show is simply mind-blowing from the sound to the production which includes fully clad Viking warriors and Loke himself!

Although all the way up in the lofts of the venue, upon the impressive large Viking helmet / drum riser, new drummer Joke Wallgren batters the skins like he was at battle himself displaying a perfect balance of clarity and impressive timing, which I’m sure would have Testament’s Gene Hoglan nodding with approval.

‘Cry of the Blackbirds’ and ‘Deceiver of the Gods’ guide us through the middle of tonight’s setlist with shadows and silhouettes of arms, legs and floating bodies, swelling throughout the jam-packed venue. ‘Destroyer of the Universe’ smashes through the darkness of the venues audience, providing the soundtrack to complete chaos. Guitarists Mikkonen and Söderberg work every angle of the stage, all the while not missing a note as they unleash the full spectacular potential of Amon Amarth’s arsenal of hits. 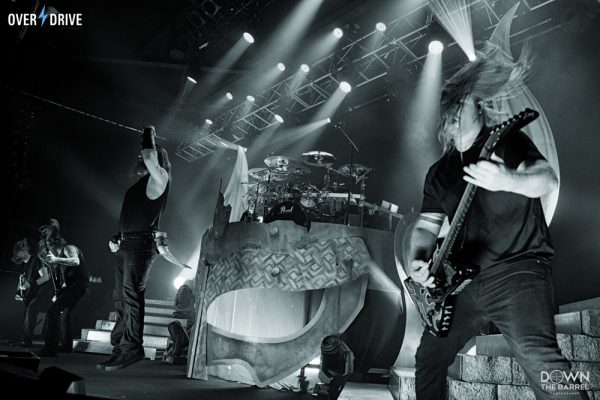 There are many moments of brilliance throughout Amon Amarth’s performance tonight, but the genuine expressions of gratitude upon each band members face, as each slab of majestic brilliance comes galloping from the stage, is something that tells a story of a band that have struggled and pursued their dreams; for the best part of twenty-four years. 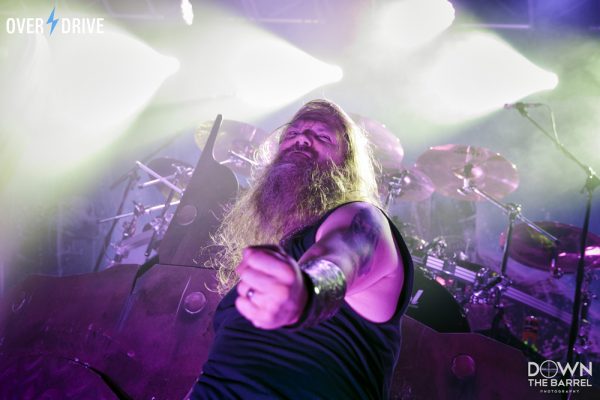 With their headline slot for Bloodstock 2017 just recently announced, Amon Amarth is finally reaping the rewards, which is a comforting sight to see. Regardless of the naysayers who claim metal to be on its last dying breath, Amon Amarth is proving otherwise. Tonight they gave a metal masterclass that breached the front lines of the modern metal, leaving a trail of wonderful destruction, melodic riffs and nearly two thousand happy punters. If they can pull off a spectacular show under the roof of a venue, just imagine what they can do when closing the main stage at next years Bloodstock Festival! The Vikings have arrived and they ain’t going anywhere too soon! 5/5

Amon Amarth is currently on tour with Testament and Grand Magus with a few select shows featuring Behemoth. Get all the details here.

All images © DOWN THE BARREL PHOTOGRAPHY 2016