It really is a massive rush when a show with true rock legends hits the city and the run up to this show has been no different. The legends we speak of are none other than the iconic, Bad Company who have brought along Richie Sambora (Bon Jovi) and Orianthi (Alice Cooper) otherwise known as RSO for the ride. 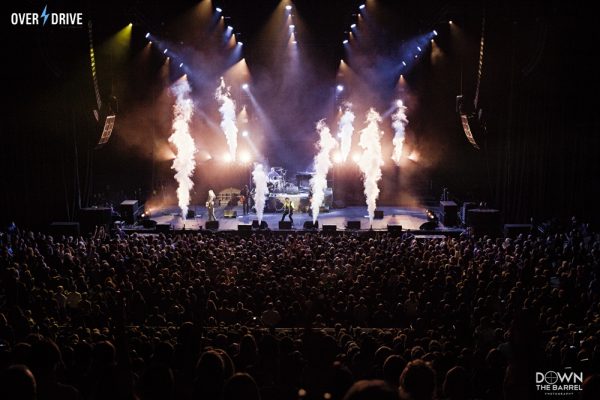 They may not like being called it but Bad Company are a true supergroup! Formed from the ashes of Free and including members of Mott The Hoople and King Crimson, they formed a really powerful unit that reaches the lofty heights of rock royalty.

Tonight’s show in Ireland’s 3 Arena, comes with the optimum standing layout, adding to the overall experience that we were about to encounter. As soon as this show was announced I knew that this was always going to be something to savour. 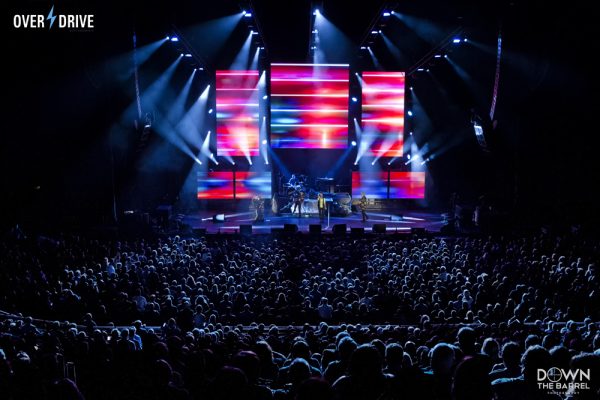 Kicking off proceedings are a stripped down version of Dublin band BARQ. Although I didn’t know their music very well, I did recognise the name of guitarist Stephen McHale and instantly recognised the wonderful voice of Jess Kav from some of her other recent work and what a voice it is, powerful and full of soul. Having been given a heads-up by a member of staff on the quality of their soundcheck, it wasn’t really needed, just a few bars in and the talent on show was very obvious.  Their low-key set definitely peaked my interest in seeing the band in full flight. Keep the name in your head, they may not have been an automatic choice for this lineup, but they left the stage to a terrific crowd reaction and they looked like they were loving it up there. 4/5

For more information on BARQ, just click this link.

The main support act for tonight is none other than former Bon Jovi guitarist Richie Sambora & Austrailian guitarist Orianthi, who are currently going under the moniker of RSO. The only two listed names in the band are Sambora & Orianthi, but what really worked well for them tonight was the accompanied musicians, who displayed a tremendous level of virtuoso musicianship. 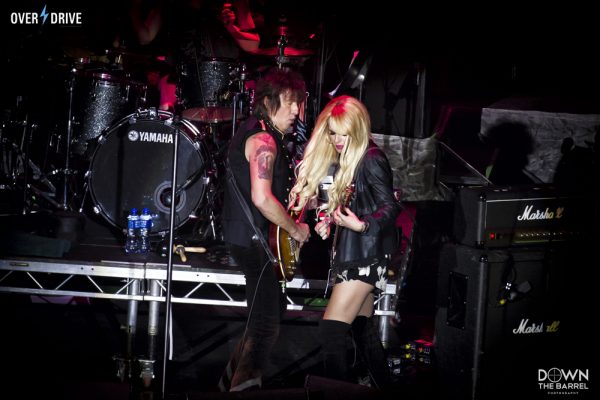 The last time Sambora was in Dublin was back in 2014 when he played the Olympia just under his own name, but with Orianthi at his side, it should hopefully be an excellent addition to the already fantastic bill.  However, tonight’s performance just doesn’t seem to fit into place as much as I’de hoped for. Yes, the band sounded great and Orianthi as always, was in excellent form, but something just wasn’t right. Perhaps it was just an off-night for the duo, who knows! For the most part, Sambora seemed to be enjoying himself, however, there was just too much messing around on stage with guitar changes every 2 minutes. Bearing in mind this was a support slot, not a headline show. 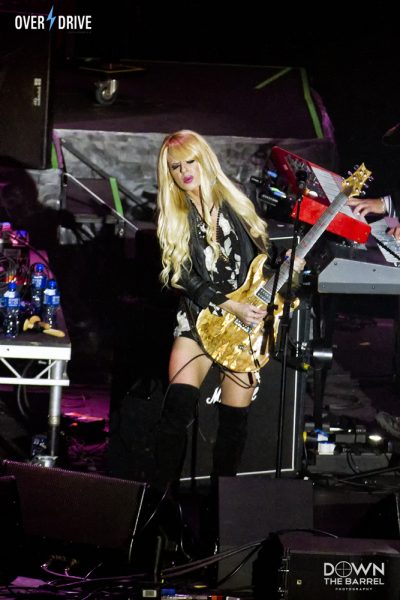 RSO provided some great moments that resonated with the crowd but for me personally it’s Sambora’s solo material that sticks in the memory the most. “Stranger In This Town” and the beautiful “Seven Years Gone” in particular, come across strong and got the crowd’s attention before a mild rush of excitement gripped the arena for some classic Bon Jovi in the form of  “Lay Your Hands On Me” and “Livin’ On A Prayer”. Not forgetting that tonight’s performance is RSO (Richie Sambora Orianthi) means we are definitely going to have some Orianthi tracks in the set tonight and that’s certainly no bad thing, with her stellar legacy of solo albums. “How Do You Sleep?” comes to mind as a highlight of the set. On another night I’m sure that this set of songs would have been far more memorable and left a bigger impression, but tonight it’s more the proficiency of the band and just how good a guitarist Orianthi is that stays as the highlights. 3.5/5 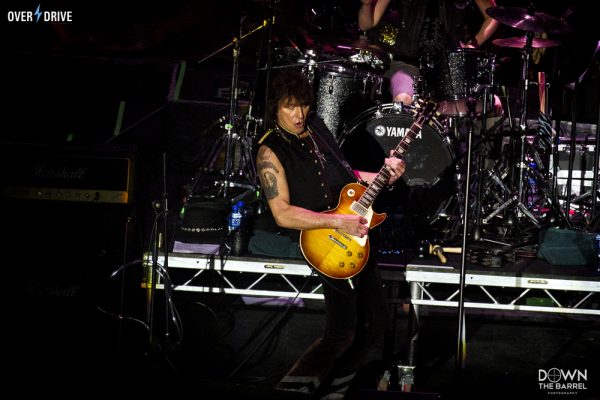 There’s plenty of chatter and genuine excitement throughout the venue prior to Bad Company’s imminent arrival to the vast stage.  Suddenly the lights drop and Bad Company hit the stage with a blast of adrenalin that washes through the entire arena like a wave. One of the first things that really hits you square in the mouth is the wonderful purity of Paul Rodgers voice. It is simply jaw-dropping and slightly awe-inspiring when thinking about his effortless vocal power and range. 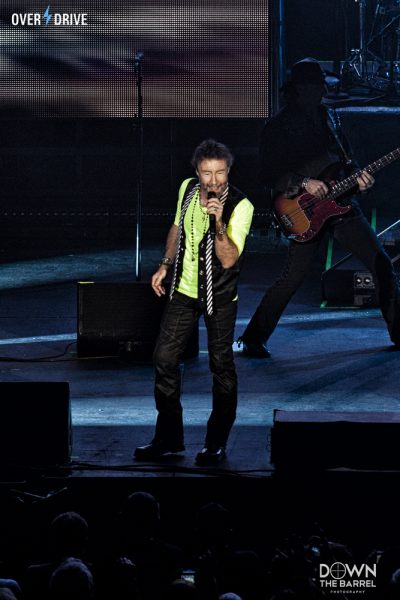 It’s hard to take your eyes off Rodgers until that beautiful guitar tone of Mick Ralphs kicks in and you are drawn to the back right of the stage. It really is wonderful for the Dublin audience to get to see him play, as he had to miss our on some U.S dates; while recovering from illness. Then there is the truly excellent Simon Kirke on drums, who was Rodgers colleague in Free. Kirke is rather understated until he grabs the attention and again it’s a case of eyes and ears popping around the stage. From where I stood the sound was excellent tonight. Every instrument was as clear as it should be for all gigs of this size, nothing muddied and nothing overpowering, but still it’s that amazing voice that keeps grabbing you.  Now aged 66, and rapidly approaching 67, Rogers is crystal clear and can still hit the notes like he has always done. His performance is simply beautiful to watch and hear. It truly is one of those times when you are stopped in your tracks by how good a performer is.

Opening up with “Live For The Music” from 1976;s Run With The Pack album, it’s not long before the guys break out the classic “Feel Like Makin’ Love” which definitely raises the volume levels all around. A really well-balanced set unfolds, with new track “Troubleshooter”  which sounds pretty good, alongside “Electricland” or “Movin On”. Everything just flows really well tonight, but it has to be said the way they close out things tonight, is how a top class rock band should. This wonderful performance would have been worth the trip alone, even if it was just for the stunning rendition of “Shooting Star”, with images of fallen rock idols on the large screens behind the band,

Rodgers is loving the interaction and reactions from tonight’s crowd and as they launch  straight into “Can’t Get Enough” the 3 Arena roof get’s blown off!  A mass sing-along ensues with “Rock ‘n’ Roll Fantasy” which is accompanied by a montage of  fantastic black & white photography from the band’s heydey on the screens behind them. 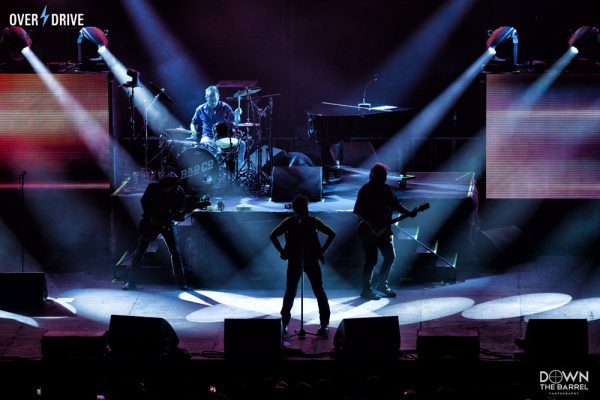 A With a very brief interval before the encore, there was no way they’d leave without playing “Bad Company” and it’s only when you start thinking back it really hits you how many amazing songs this band have in their back pockets, particularly from the first three albums.

What a set, what a tight band, be it the founding members Rodgers and Kirke, or Ralphs twin guitar with Howard Leese, or perhaps the very visual bass playing of Todd Ronning, this band will hopefully get back to us soon, just so good.

The only down point of the whole night is the size of the crowd, you would expect an audience in Dublin for a band of this calibre and stature to be selling out the venue, or certainly drawing a significantly larger sized audience that we’ve gotten tonight. Thankfully the people that were there made themselves heard with some great singing and loud cheering throughout the set. This particular night will live long in the memory for the simple fact of witnessing these legends play like the legends and doing what they were born to do. 5/5

ALL IMAGES ©Down The Barrel Photography 2016


Live For The Music

Run With The Pack