Finnish metal/power crew BATTLE BEAST roll into Dublin for their debut Irish performance with Cyhra in tow and what a night! Get the full story below… 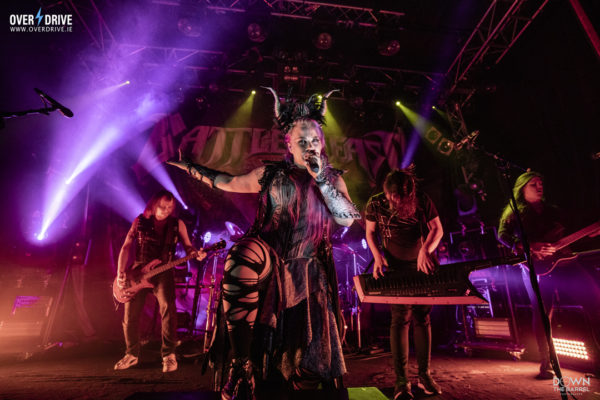 Down The Barrel Photography – For www.overdrive.ie © 2019

This evening’s support comes from Swedish band Cyhra, formed by ex-members of Amaranthe, The Shining and In Flames, who are out with their latest album, ‘No Halos in Hell’.

Singer Jake E. storms straight into their set, but has to stop after a couple of songs to ask, “where the fuck is the light guy?” I’ve no idea the answer to his question, but for some reason the lights were on full, blinding the band on stage and lighting the place up like a Christmas tree. 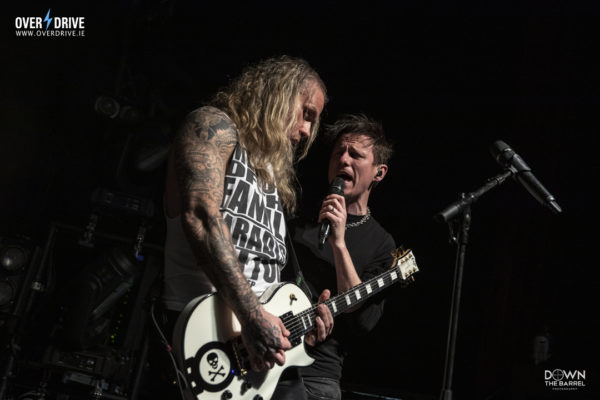 Down The Barrel Photography – For www.overdrive.ie © 2019

Eventually someone took control and learned lighting over the course of the remainder of Cyhra’s set, pressing every button and using every light available to them.

Cyhra has the unusual situation of having a recording guitarist; Jesper Stromblad, who is replaced for touring by Marcus Sunesson, known for his work in The Crown and Engel.

There’s always good banter between singer Jake, the band members and the crowd. One fan in the front row, Karim, had emailed the band in advance looking for his favourite song to be played, and they were happy to oblige.

Drummer Alex Landenburg spends more time out of his drum stool than Metallica’s Lars Ulrich, bouncing around like the Duracell bunny. Blond guitarist Euge Valovirta is great, stepping centre stage for his solos, having a laugh with Jake and sneaking a few bars of Whiskey in the Jar into the last couple of songs. 3/5

The first time I saw Battle Beast was at Tuska Festival in Helsinki two years ago and cemented by a Bloodstock Festival Thursday headline slot the same year, they quickly became one of my favourite new bands. 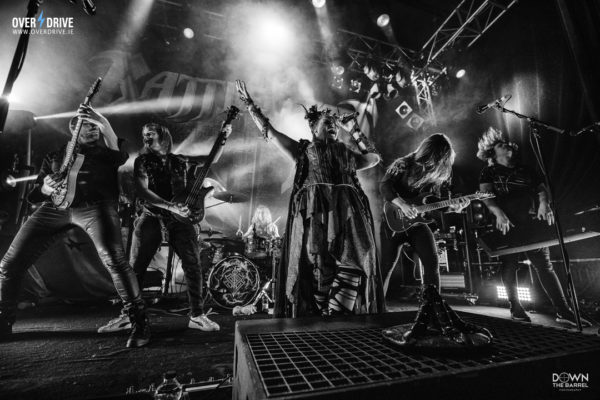 They’re made to be a headline band and they pull no punches tonight with all of their catchiest songs included. Opening with a bang they explode into Unbroken and Familiar Hell.

They’re touring in 2019 on the strength of new album ‘No More Hollywood Endings’ and are in Dublin for the first time. (“It’s only taken us eleven years…..”) While every band member does his best to steal the limelight, the focus always comes back to the indomitable Noora Louhimo and her flamboyant presence.

Tonight she is wearing a horned headdress that looks part pagan goddess, part Maleficent. When she steps onto her riser, framed by blasts of smoke from CO2 cannons, she is every inch the front-woman, and demands all eyes are on her.

There’s some histrionics from keyboardist Janne with a keyboard/drum machine hybrid, which they christen the Disco Invader but it’s all in good fun and adds to the party atmosphere at the Button Factory.

The small but enthusiastic crowd is well up for it and creates enough noise for a crowd twice its size. By the time they get to King for a Day there’s hardened ‘metallers’ in Megadeth t-shirts shaking their booty like Beyonce.

Highlights of tonight’s show include Bastard Son Of Odin, Familiar Hell and The Golden Horde.

Hopefully, Battle Beast stick to their promise and don’t make us wait another eleven years for their return. 4/5.

Full Down The Barrel gallery can be viewed below;