It’s been a long time coming, but there is no doubting the rising success of Poland’s extreme metal veterans and on Sunday night, Behemoth took to the stage in Ireland’s capital for their biggest headline show in the county to date. 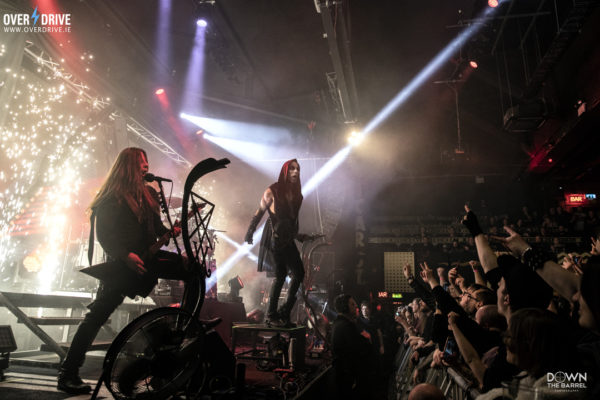 Having sold out weeks prior to the performance date, Behemoth’s triumphant return to Ireland this past weekend marked the bands forth performance on Irish soil since their first visit back in 2004 in Whelan’s. Tonight it a different story altogether.

The band’s recent North American jaunt with Slayer and recent UK dates have generated glowing reviews across the board, boosting the band’s success within the global metal community, quenching the scorning elitists, and muting the acid tongues of some basement-dwelling trolls, who proclaim that the band have ‘sold out‘.

Well, the only thing that’s sold out tonight is the venue itself! 1,500 punters brave the stormy Sunday evening in anticipation of tonight’s stellar lineup!

First up on the slightly cramped stage is American Black Metal crew, Wolves in The Throne Room, who bring their ambient blend of bleak mythic/heathen inspired sonic landscapes, courtesy of brothers Aaron and Nathan Weaver. 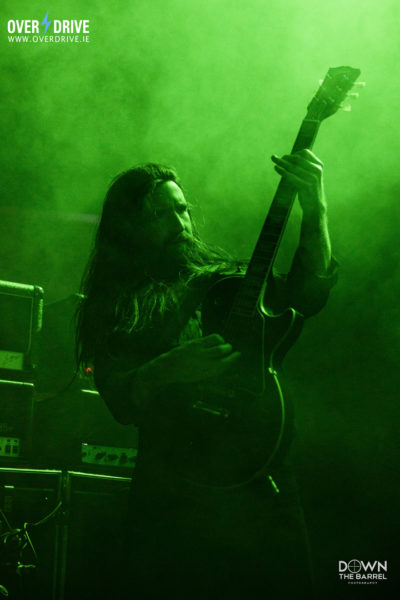 With a mostly high-end mix, WITTR takes us through a three-song set comprised of material exclusively from ‘Thrice Woven‘ (2017) their most recent release.

Opening with ‘Angrboda‘, the Weaver brothers plunge Vicar St. into a dark overgrown metaphorical forest, with a lingering desperate and foreboding atmosphere. With a few sound issues here and there, they push on with ‘The Old Ones Are With Us‘ and finally ‘Born of the Serpents Eye,‘ which sees their set come to an end with a somewhat reserved and luck-warm reception from the now packed venue.

If WITTR took you into a dark forest, then AT THE GATES most certainly bulldozed their way through said forest and proceed to deliver a sensational, high-energy blast of razor-sharp quality melodic Death Metal bangers.

Without a doubt, Gothenburg’s Death Metal crown jewel (sorry In Flames. Not sorry) At The Gates are on fire tonight! We are treated to a 12-track setlist that boasts luxuriant riffs and bountiful blast-beats (courtesy of the brilliant Adrian Erlandsson) that begin with the title track to their most recent, ‘To Drink From the Night Itself‘ LP,  which catapults the venue’s main floor into a swirling mass of beer and black leather. 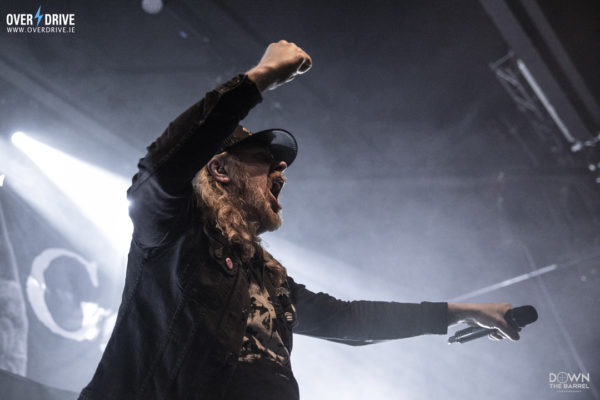 Dipping back to ’95 with ‘Slaughter of the Soul‘ causes a euphoric response from every corner of the blackened room. A little clarity on the twin guitars brings Martin (Larsson) and Jonas (Stålhammar) to the forefront, thankfully before the track ends, which is just in time for ‘At War With Reality‘, which lands like a loaded B52, and it’s glorious!

The duration of the Swedes set is laced with relentless sonic climax’s from start to finish (middle-eight section for ‘Cold‘ for example) and let’s not forget the preposterous ‘chuggernauht’ of ‘Suicide Nation‘, which always exceeds its intentions to destroy! Fan-fucking-tastic! 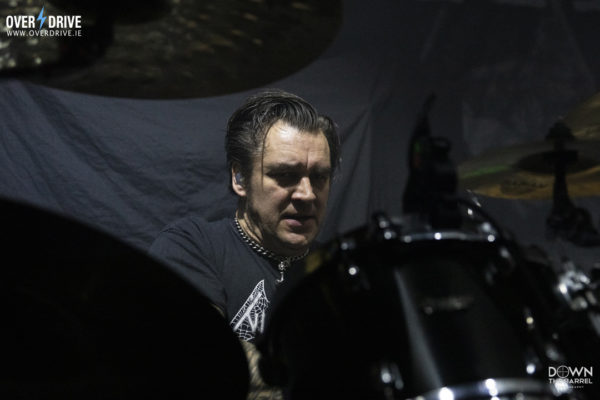 Sticking to material exclusively from ‘Slaughter of the Soul‘, ‘At War With Reality‘ and ‘To Drink From The Night Itself‘, AT THE GATES are just formidable tonight! No fancy stage production needed, as Tomas (Lindberg) and his colleagues proceed to absolutely smash the stage and no doubt put the shits up tonight’s headliners, who can no doubt hear the level of destruction from the backstage area. 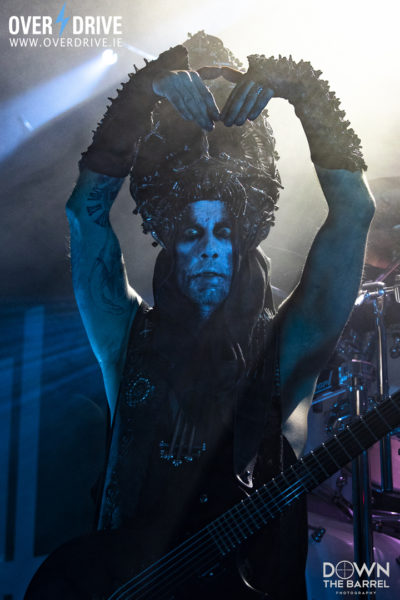 Finishing up with ‘The Book of Sand (The Abomination)‘,  ‘Blinded by Fear‘, and ‘The Night Eternal‘, tonight’s openers have become a distant memory. After this performance, had ATG been the final band of the night, I’d have gone home a happy man. 4.5/5

And so, on to the evening’s headliners. Behemoth is now approaching close to 30 years of existence, with a multitude of battle scars to show, should you wish to delve a little deeper into the bands interesting and at times, ground-breaking history.

2014’s ‘The Satanist‘ rewarded the native Pols with a tremendous surge of interest across the globe, in particular, North America, who have invited the four-piece back for multiple tours, most recently in support of Slayer’s farewell tour last year.

With the new album ‘I Loved You At Your Darkest’ (2018) Nergal and co. have continued their rise in the popularity and have been laying waste to venues across the UK and Europe with what can only be described as a visual and aural celebration of the band’s long journey to the present day.

The anticipation for tonight’s headliners floats through the sold-out venue like an electric current, as the backing track playing ‘Solve‘ becomes more prominent. Finally, with the deafening roar of 1,500 punters, the stage explodes into life and ‘Wolves of Siberia‘ unfolds before our eyes and ears. 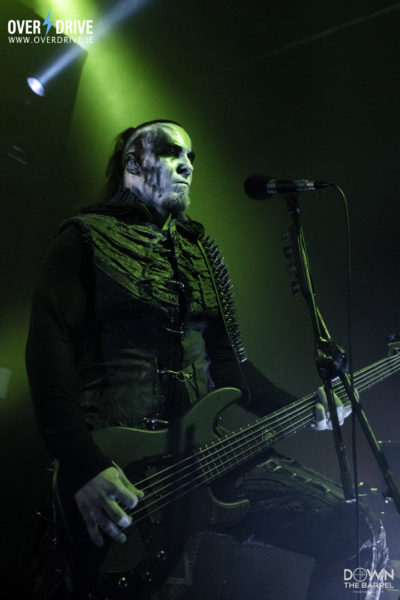 Looking very much the part, frontman and Behemoth brainchild, Nergal looks possessed, under the blasts of CO2 gas and thundering stage lights. To his left man-mountain Orion wields his bass like an instrument of unbridled power, as he lums over the lip of the stage dripping in his trademark corpsepaint.

The pure haunting intro to ‘Daimonos‘ unleashes a melee of pyro, CO2 and blitzkrieg stage lights as Behemoth flex their muscles with the might of Apollyon himself. Following with ‘Ora Pro Nobis Lucifer‘, Nergal commands all around him with effortless confidence, as he scales the drum riser and looks upon the legions of rabid punters that fill the venues main floor and jam-packed balcony.

The impending and gloriously ominous intro to ‘Bartzabel‘ cuts through the chanting, cheering and roaring from the overzealous crowd and once again before pyro-spark jets pulse into life at either side of Inferno, Behemoth opens the gates of hell with an intensity that escalates with each passing moment.

The clarity of Inferno’s kit in the mix is enough to get the hairs on the back of your neck to stand to attention, most notably with his wrist/foot action for ‘Ov Fire and The Void‘ which is followed by ‘God=Dog‘, (the third track performed from the latest album) much to the delight of all in attendance. 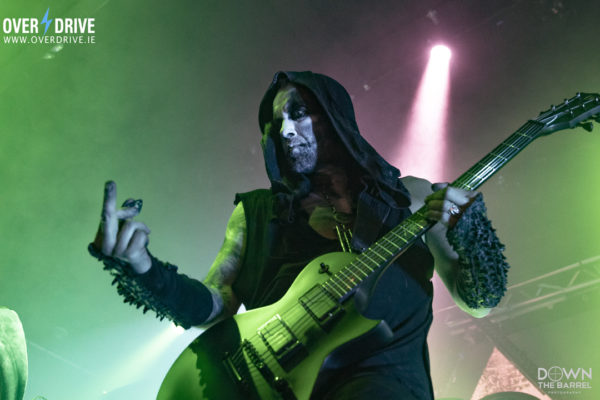 With very little talk from Nergal, apart from his approval of Ireland’s recent obilination of our Blasphemy Laws back in October 2018, Behemoth proceeds to beat the Irish capital into submission with the first ‘deep-dip’ from the bands back catalogue. ‘Conquer All‘ rears its head and sounds as fresh today as it did back in 2004, followed by the magnificent ‘Ecclesia Diabolica Catholica‘, and the brutal ‘Decade of Therion‘ from ‘1999’s ‘Satanica‘.

With various costume changes and a seamless transition from the older material to recent, Behemoth have truly become a force to be reckoned with in the realms of extreme Black/Death music or ‘Heavy Metal‘ if you’re not bothered about being genre specific. 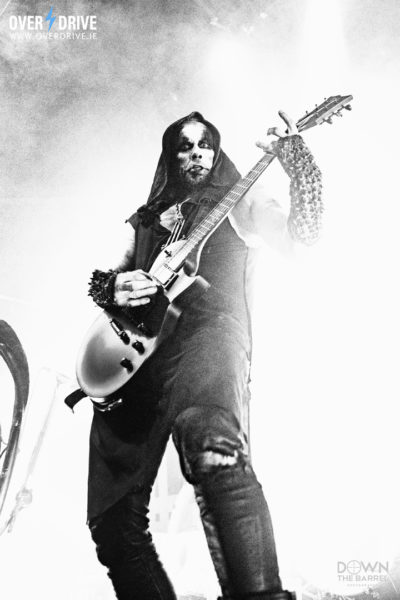 Pushing onwards, we are treated to ‘Blow Your Trumpets Gabrial‘, ‘Slaves Shall Serve‘ and a near-perfect exectution of 2007’s ‘Chant for Ezkaton 2000 E.V.‘, which just slays thanks to the tracks ferocious galloping pace, once again provided by Inferno.

Prior to the encore, Nergal once again addresses the venue and thanks us for our support and takes in the spectacle of a sold out 1,500 capacity. That’s a long way from the bands humble Irish debut show in Whelans back in 2004.

With a few more costume changes and a stage production that just won’t stop giving, we are presented with a ‘Lucifer‘ and finally ‘We Are The Next 1000 Years‘, which sees Orion taking centre stage wearing a primitive style headdress, all the while a bomb of black confetti blasts from underneath the drum riser and both Seth and Nergal torture their guitars.

This has truly been a defining live show/tour for Behemoth that will no doubt set benchmarks in the extreme metal global community, not to mention the whole embodiment of Heavy Metal and its evolution into the next decade. 4.5/5

COMING UP!! – Overdrive’s feature interview with Nergal will be out this week! Keep your eyes on our website!

wWolves In The Throne Room 0033

wWolves In The Throne Room 0047

wWolves In The Throne Room 0068

wWolves In The Throne Room 0028

wWolves In The Throne Room 0087