The games are over. The rehearsals are finished. The big time has arrived. Fibber Magees saw the last of the semifinals of the 2017 Metal 2 The Masses and it was an amazing night of different blends of metal. The ears were definitely cleaned out after this one, with some of the best performances in this competition in one night. Overdrive had Shaun Martin report back on the events. 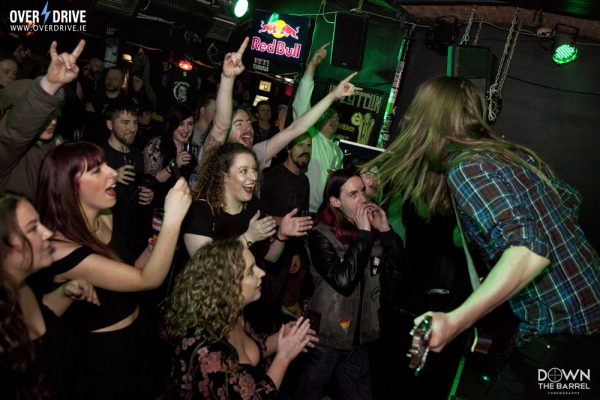 Firing up the bellows of the semifinal C in 2017, are an international metal group, Freemen, with their nu/groove metal fusion. The pace is fast and furious and the pace just picks up as their impressive setlist progresses.

Soft spoken frontman Prospero Lulio has grown in confidence since they last played in Fibbers. Lulio’s stage presence has grown and it fits the type of music they play. David Draiman he ain’t, but it’s not a bad starting point. In their 2nd song ‘Disctopia’, Lulio’s voice takes a while to warm up, but by the middle, it is in perfect form. Their music does the talking, as Lulio introduces each member of the band and the songs in between yelling his head off. 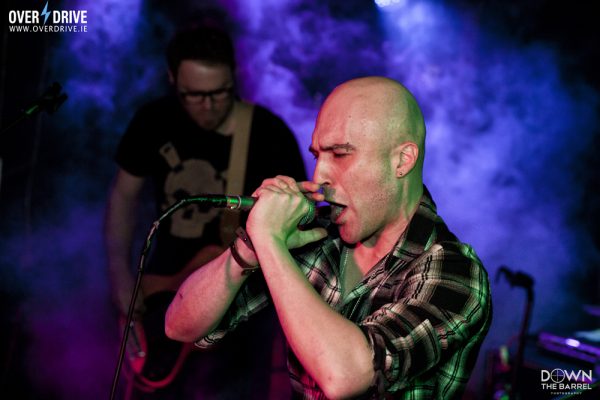 Drummer Maciej Rola seriously gets behind the songs, supplying the backbone of a very intricate set of tunes. The riffage supplied by Mirek Dybal is crushing and the delivery is also a step up from their previous gig here. Bassist Zybch SLK also lends a hand in fanning the flames and the intensity grows the longer the band plays. Freemen are up-and-comers, only starting in 20143 and after taking a break, returned in 2016 with an almost-new lineup. There are big things in store for Freemen and we’re gonna hear about them in the not too distant future. 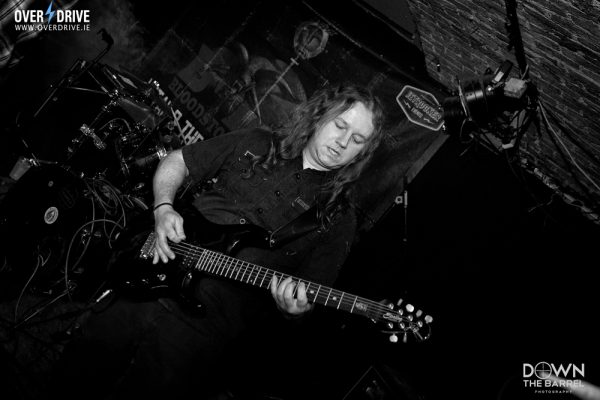 Following Freemen are M2TM 2016 finalists The Devil Wants Her Swagger Back. The anticipation from the crowd for this band is unbelievable. TDWHSB waste no time after their soundcheck in getting straight into the mix, as singer Stephen Cannon psyches himself up for what could put the band in the finals. After a short intro, where Cannon repeatedly screams if the audience

After a short intro, where Cannon repeatedly screams if the audience is ready, there is a short 1,2,3 tap on the high hat by drummer Ryan Cummins and all hell breaks loose. The ludicrously heavy beats and insane riffs by bassist Dylan Scully and guitarists Mick Hynes and Damian Regan are definitely Bloodstock-worthy. Cannon is a frontman who also takes his job seriously, by engaging with the crowd and actively getting people to move in unison to the beats. TDWHSB always impress with their setlist, and during their 4th song ‘Monster’ they are joined by Rouen frontman Andy Fitzpatrick on vocals. 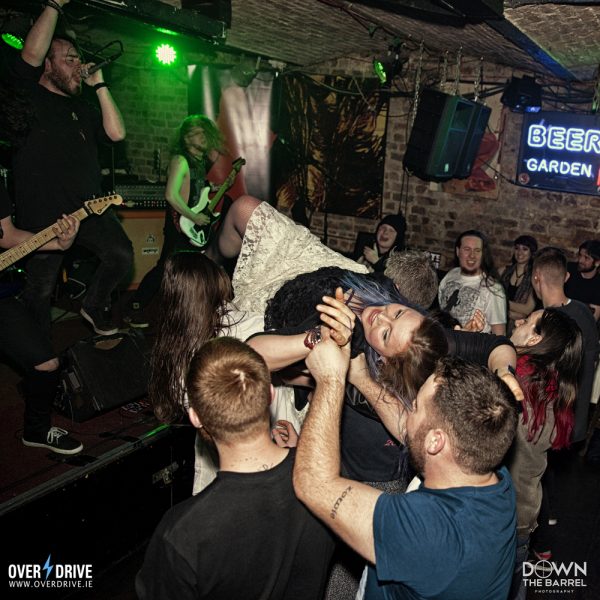 This makes a special event even better, as the duo light the venue up with some of the angriest and well-delivered non-professional frontman behaviour going. TDWHSB are one of the tightest and well-rehearsed bands in this entire competition and it will take a lot to get them to slow down. They recently came off the back of a tour of Russia and released a video for their last song End Game so be sure to check that out if you haven’t already. 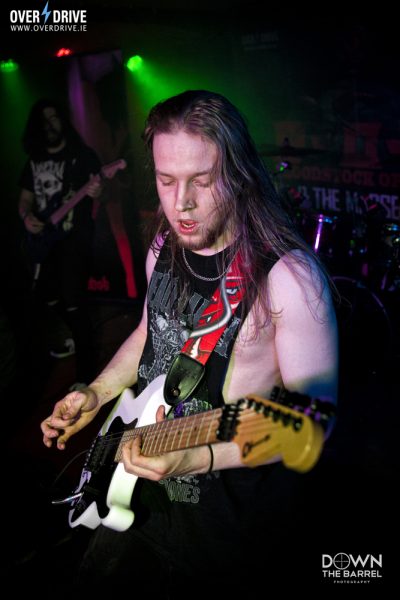 Following TDWHSB, are another former M2TM contender, Xerosun, from Dublin. Fronted by the formidable Martyna Halas-Yeates, Xerosun are heavyweights in this competition and indeed the underground metal scene in Ireland in general. Their death/prog mix creates a ripple of sound that resonates loud and deep into the audience, as 9-string demons Gareth Jeffs and Fiachra Kelly pull together an instrumental

Their death/prog mix creates a ripple of sound that resonates loud and deep into the audience, as 9-string demons Gareth Jeffs and Fiachra Kelly pull together an instrumental master class in stage appearance and musical ability. Halas-Yeates is a different beast altogether. She is definitely in the role she was born to play. Ferocious and concise, she can roll with the best of them in her particular genre.

The changes in tempo and pace (of which there are many), happen instantaneously, and all 5 bandmates are in 100%  timing with each other, which in their style, is quite impressive. But Halas-Yeates is the linchpin here – her ability to sound like an angelic choir and switch to a growling wild animal interchangeably is an astounding talent – one that will take them further afield without any doubt. This flammable band is a rising force in underground metal. Watch this space. 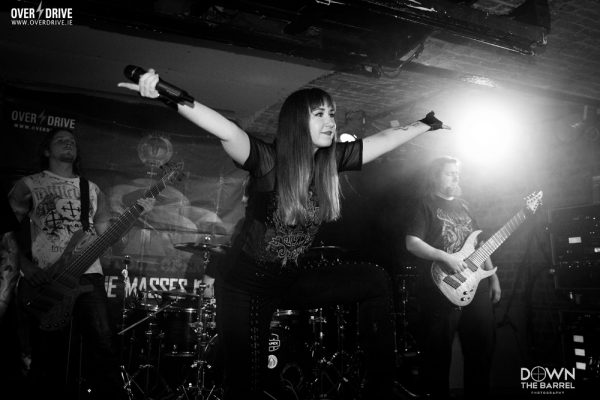 Their novel entry to M2TM 2017 brings everyone’s inner Michael Flatley out for a wander. In their initial entry to this year’s competition, they have also grown in confidence. Vocalist Maitiú Ó Héanú has changed his approach slightly to the mic duties and they sound amazing. The traditional elements of fiddle player Ana Carolina Hatschbach Cardon, coupled with bouzouki/feadóg player Ciaran de Búrca, give you a little chill right before Ó Héanú shatters the eerie haunting silence with a war cry that would make Cúchulainn proud. 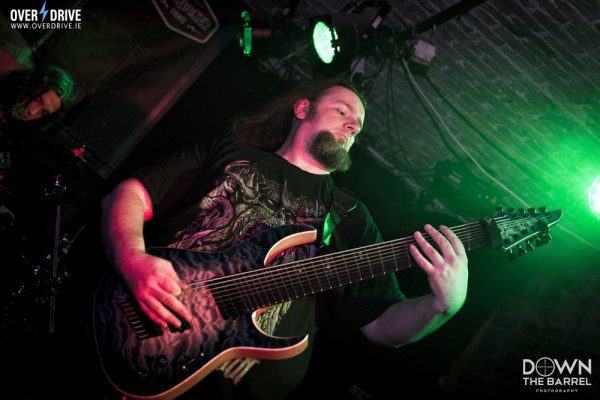 Na Crúithne share their rare song strategy with us and the pit action is just crazy (there’s one guy windmilling to a fiddle solo right up by the stage– can’t say I’ve ever seen that before), but the crowd is growing and growing in size around the stage. At one point I think full capacity was reached at the live venue area. Drummer Lisa Howe is cataclysmic in the beats section and rightfully so because Na Crúithne are decimating the audience here tonight. 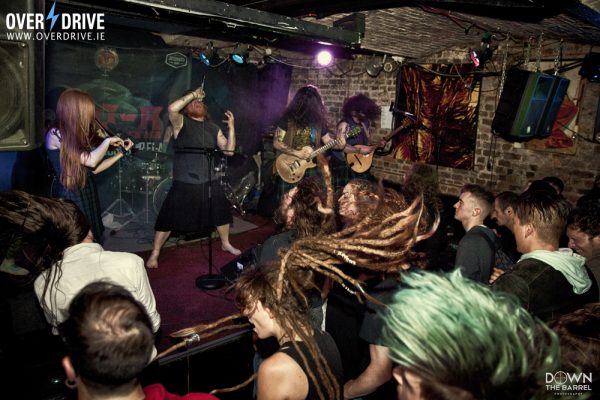 As ambassadors for both the Irish spoken language and for the country itself, this is a band that needs to be taken heed of. Their music is not novel (there are multitudes of bands who sing in their native tongue), but it works on a far grander scale than anything out there at the moment in the underground scene in Ireland. 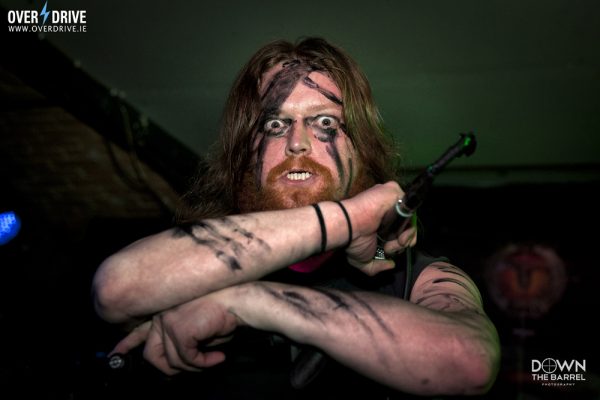 Finally, we see Jailbirds run up the ranks and take the stage for the final band in the semi-finals of M2TM 2017. Australian brothers Axel  (vocals and lead guitar), and Jay McDonald (drums), with bassist Jamie Trimble and rhythm guitarist Ed Orr, both from Ireland, there is a healthy eclectic mix of different rock influences in their setlist, like AC/DC, Thin Lizzy, Airbourne and much more.

Admittedly, they ‘don’t play metal, they play rock and fuckin’ roll!’, they waste no time in immersing themselves fully in their music, with Ed giving it socks on rhythm guitar. He seems to be losing his shit more than the others, (not to say they’re not going mental also, but Ed has lost the plot). As with most rock and roll gigs, the headbanging never ceases from beginning to end. Jailbirds continue the night’s entertainment with their Ozzie/Irish mauling, the fun is actually nonstop. Their riffs are simple in arrangement, but as you get into the groove of their style, you just can’t help but bang your head and get those fists in the air. 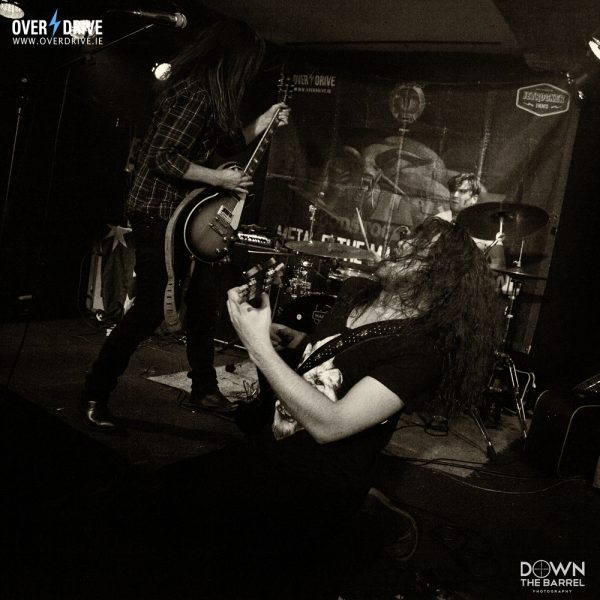 Axel laps up his role as the frontman and his brother behind him has a smile on his face you could land a plane on. There are smiles all round as Jailbirds rip up the heavy night with a lighter but more intense setlist that seems to refresh the audience. I’m looking at the judge’s table and I’m having a lot of fun and really getting into the music – I look across the table and so is everybody else! Superb stuff tonight from Jailbirds, and their name will only get bigger!. 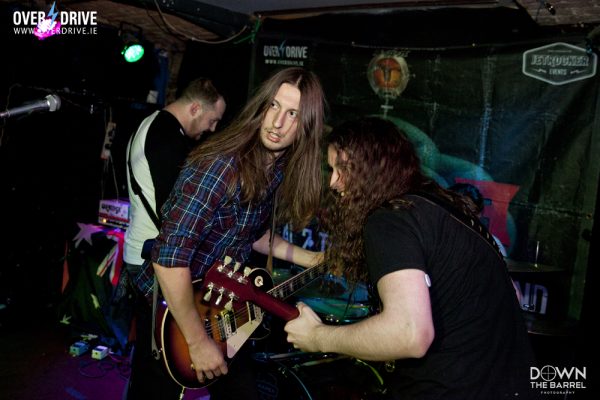 The Crawling were the winners of the Northern Ireland M2TM 2916 competition and were also handpicked by Simon Hall along with our own Ten Ton Slug and Two Tales of Woe to play at the Bloodstock Open Air Festival. They are tonight’s after-show entertainment and I gotta say – there’s no surprise why they were chosen.

Talk about heavy! They unleash their fury on Fibber Magees and sound like a wild animal. Their first beat they drop is a hardcore kick to the face and the thundering bass and drums core out your head. The trio of Stuart Rainey, Andy Clarke, Gary Beattie from Lisburn, fuse a death and doom metal mix to break the ground open and let hell spew forth. Their own light show as well is perfectly timed to the drums and it looks top of the line metal show material. Parts of their set are slow and atmospheric and others are hard, heavy and fast. Both frontmen with their gravel-toned voices produce a monumentally heavy presence and The Crawling gets under your skin with relative ease.

Our guest judges for tonight are Conor McGouran from Xerath and Darren Keogh from Warpath. Both are seasoned musicians in the Irish metal scene and are elegantly poised to make the hard decisions tonight. The crowd vote goes to The Devil Wants Her Swagger Back and eventually, the judges decide that Na Cruithne are the last band to be chosen by the judges in 2017.

All eyes now fix on the grand final on May 13th, where Bloodstock head-honcho Simon Hall will be selecting one band of 6 to perform at the New Blood Stage at Bloodstock Open Air. TDWHSB and Na Cruithne join Call to Arms, Sectile, Zhora and Antidotes for what will be the most metal night of the underground calendar. Miss this one at your peril!

Click the graphic below for the official event page. Doors from 7pm with a special early bird admission price of €5.00 and €10.00 from 8 pm onwards. This is an 18+ show. 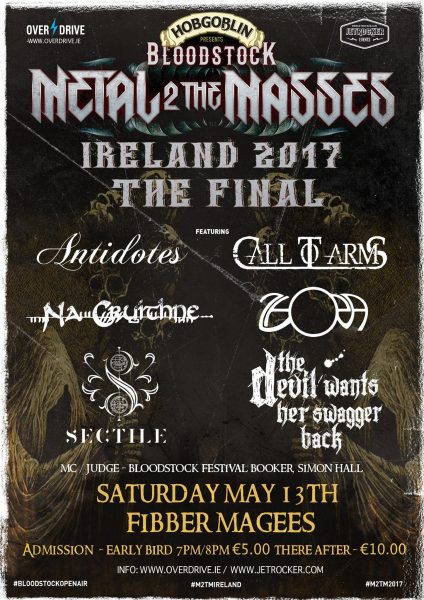 Tickets for Bloodstock Open Air Festival are on sale now. Get yours by clicking on the graphic below. 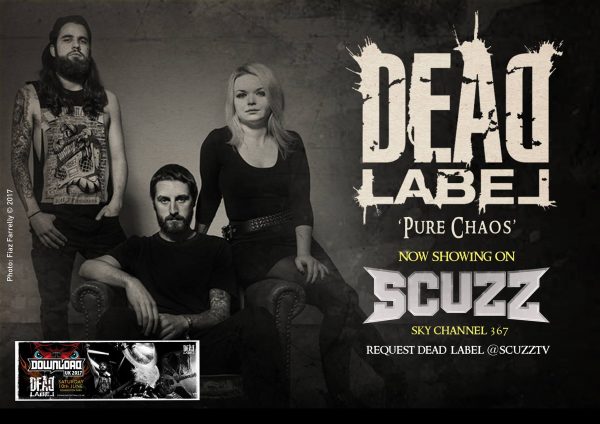