Another Metal 2 The Masses Heat rolls into Dublin’s Fibber Magees on what promises to be one o the best yet in this competition. 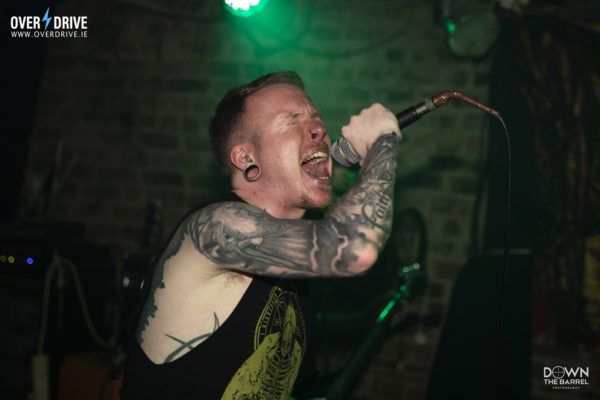 The winners of this heat will join My Soul Divine, Scathed, Sectile, Old Season, Black Tree and Brik in the race to get to the Grand Final on May 18th where Bloodstock supremo Simon Hall will personally choose the band to play at Bloodstock Open Air with Scorpions, Cradle of Filth, Sabaton, Children of Bodom, Soulfly, Parkway Drive and many more huge international metal acts.

We’re warmed up, the bands are set, and the crowd is ready. Let’s get into it! 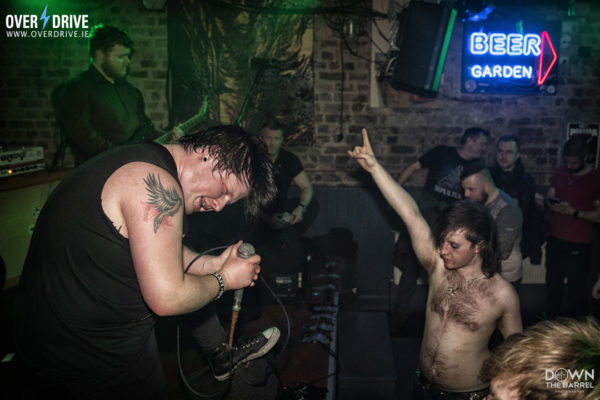 Dublin 5-piece Pain in Vain have been at Metal 2 The Masses in previous occasions, most recently 2017.

Seasoned frontman Mikey O’ Riordan, who also sings for another metal band Infectious has a self-belief and a belief in his band that is contagious and admirable. Even before the first song is fully finished, the dance floor is full of people screaming their heads off.

There were about 10 people active as they started, but 4 minutes later that has multiplied by a considerable number. The simple and effective guitar work by Jake Black and Warren Ryan is backed up by drummer Bernard Walsh who is absolutely slaying the skins, and at the same time supported on the bass by Kenneth Dignam.

The band has the crowd firmly in the palm of their hands, the song structure is similar to that of melodic metalcore and post-hardcore bands like Killswitch Engage, Job for a Cowboy, All That Remains, Bring Me The Horizon and The Black Dahlia Murder.

The drums, however, are the star of the catchy and un-ignorable riffs. The energy is feverish because in their third song “Forsaken”, the urge not to jump is very hard to follow. The band may be relatively inexperienced in comparison to other bands in this contest night, but they have that youthful exuberance other bands lack and it serves and very well. 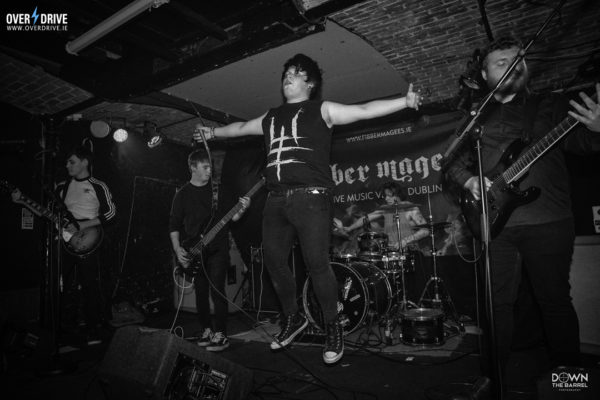 This is a great opener for Heat 4, and the bar is pretty high as we pass the 15-minute mark. This is a monstrous improvement on the last performance they had here. They are heavier, the roots are tighter, and Mikey’s voice has deepened into a growling animal. Top-notch for 8:30 pm on a Saturday night. 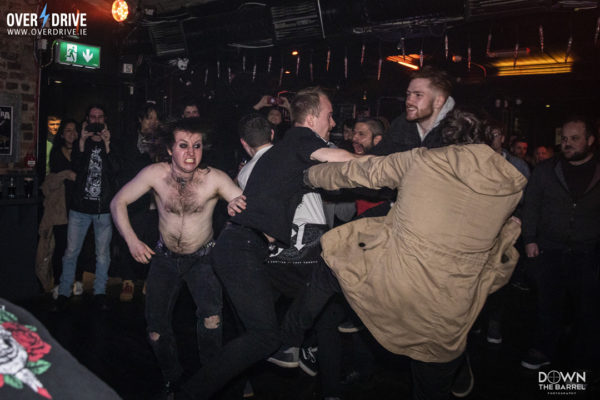 After a considerable, constructive, and revolutionary hiatus from metal to the masses, AeSect returns with a brand new singer in tow, Tony Carberry.

Guitarists Dave Kennedy and Aidan O’Halloran also keep the focus onstage in dominant poise, and in engagement with the audience, band members, and song structure alike. The methodology of delivery of the first song due to its guitar and bass structure complexities shows that this band practice a lot and does it very well. 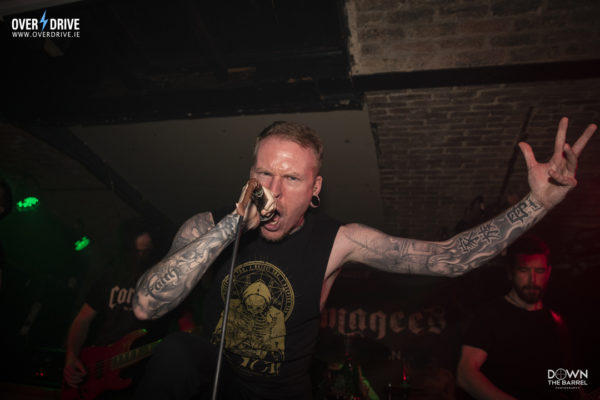 Dual rhythm sections alternating in a co-dependent timing between Kennedy and O’Halloran are the cornerstones of this band’s performance. Carberry delivers a bit of the middle finger to the Catholic institutions before hammering into their new song “Blind Faith”. 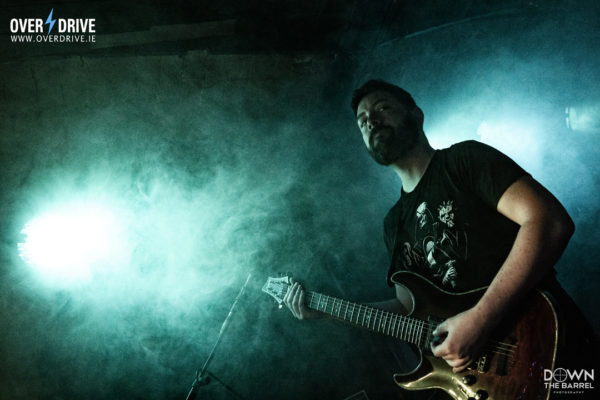 Drummer Luke Peters cannons into the drums that suit the melody of this song structure 100% perfectly, but bass player Aidan Williams has an unbelievable job of keeping time with an offbeat, harmony-based bassline and when you watch Kennedy and O’Halloran doing what they’re at, it can’t be easy.

As the set list goes on the crowd violence increases incrementally, until Carberry calmly the addresses the audience to split into 2 parts, and to “Go” and creates the biggest wall of death tonight. Job done, lads! The crowd go wild and a sect can rest easy tonight knowing they did a seriously good job indeed.

Four-piece hard rock band Overlockers hit the halfway stage tonight, belting us with a glorious hard rock/grunge mix of foot-stomping novelties, reminiscent of radio-friendly, mellower versions of Guns n Roses, Nirvana, Queens of the Stone Age, Stone Temple Pilots etc., and sung with the fire of metal lyricism from someone who shouldn’t really be in a rock band.

Frontman Jeremy Burke is very aggressive behind the mic and is easy to both categories in this place is style. 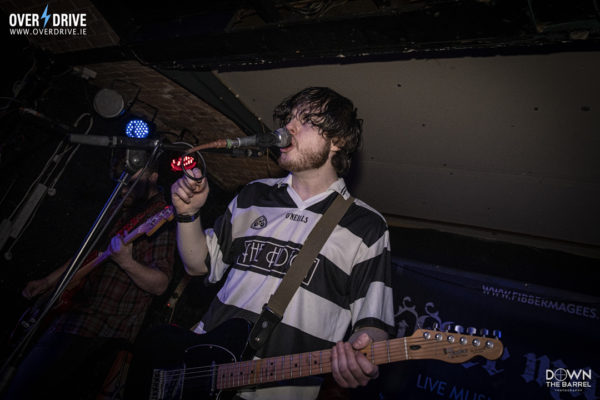 Burke is an absolute powerhouse here and is absolutely the right man for the job in this motley crew of musicians. As Burke does a quick retune mid-set, rhythm guitarist David O’Grady, drummer Eoghan Barrett and bass player Ian Madden continue the rhythm section as work re-tunes, the work ethic is as plain as the nose on your face -the show must go on.

Let this be a lesson: if something goes wrong folks, keep the pace going. Don’t give up, ever. There seems to be a bit of feedback near the end of the third song “Went to Town” but it’s only for a few minutes.

Their  4th song “Easy on You” is really, really hooky and gives a wake-up call to anyone thinking that they’re a simple rock band. Charles Darwin said it best: “it’s not the strongest species that succeeds, it’s the one most adaptable to change”.

Overlockers are changing gear mid-set and increasing the riff rate at a seriously satisfactory pace. The lead guitar lead guitar David O’Grady shreds it up in an explosive solo on the very last song “Punishing the Crime”. This is yet another band catching us unawares by saving the best till the very last, and my god what a finale. 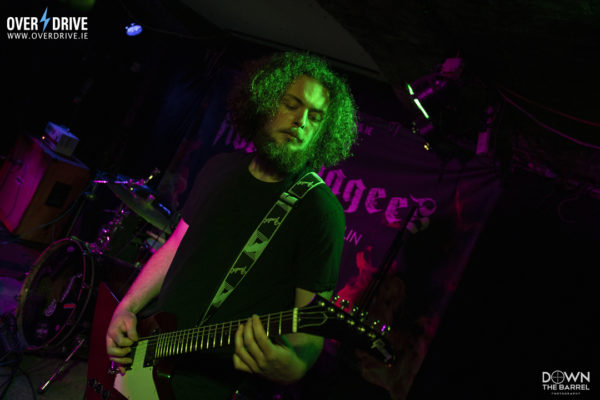 Galway-based extreme metal trio Organ Blender brings us to the 4th stage of tonight’s heat. There is some serious talent in this relatively new band, as vocalist Jay Grimm has three simultaneous jobs. Singer, and rhythm and lead guitarist, and he is more than capable of delivering the goods.

His ability on guitar, twinned with his vocal range, make him one of the most talented of the entrants this year. There may be a bit of nervous disposition in both bass and guitarist stations – it seems that there are rooted to the spot, but that notwithstanding, the music is just so fucking heavy. 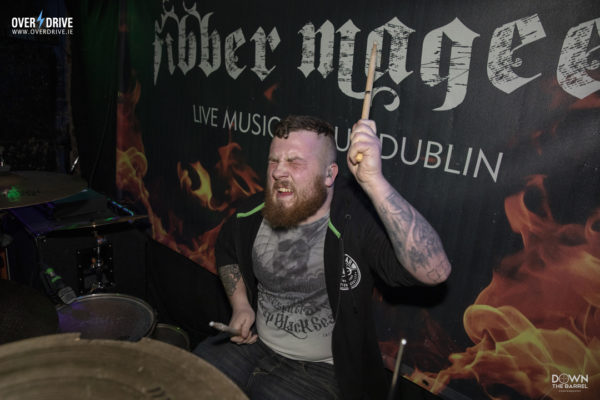 It’s like Strapping Young Lad and Carcass has had a punch up, and Organ Blender was the end result. Cool metal licks in between verses, with serious solos, and you have a recipe for some of the dirtiest and heaviest riffs I’ve heard tonight.

These all come into play as Organ Blender really do bring us into an organ blender. All three men are on fire and it’s hard to take anything away from their performance. I would have liked to have seen a little bit more movement as it would have shown that their interest and their enthusiasm was not limited to the instruments that they were playing.

That being said, there were no statues in left out on the dance floor tonight: everybody had fun,  everybody went wild. Everyone seemed to really, really enjoy the music that was coming from the brand new band that not really many people knew about, and if the truth is told, this band has a bright future and it’s going to be a very, very interesting ride 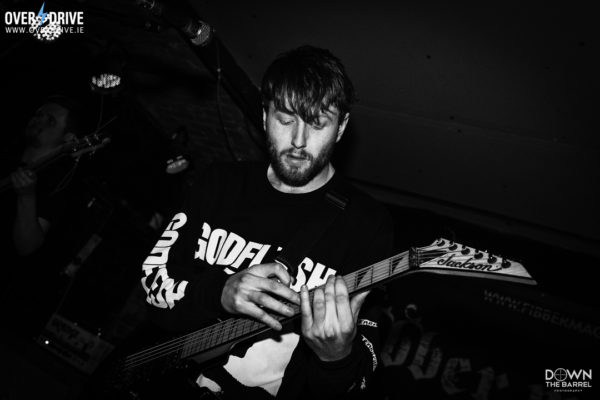 A Night in the Snow are a subtle blend of System Of A Down, true metalcore, and heavy metal from the 1980s and 90s. Frontman “One” as a real Oli Sykes approach and the shred is supplied defiantly and definitively as allocated.

However it doesn’t really look like the crowd gives a shit In the first two rows of attendees, people are losing their minds. Seriously – it’s absolutely crazy. They have the 11:30 pm slot so everybody knows what’s going on here tonight by this stage. Guitarist Andy O’Reilly is on top, top, top form with an absolutely insane solo stretch when the event is needed.

Guitarist Junior White and drummer Jay Fleming holds the pace with bass player Ciaran Hilliard taking the tail end. His job as the drummer is seriously tough because at the pace that everybody else is flying at it – must be incredibly difficult to sustain that. 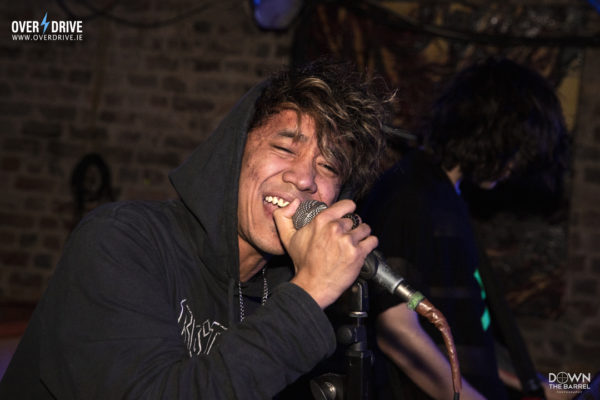 This is a tough, tough set because it’s at the pace of a coyote that has run away with a burger of a picnic table: nobody is catching them. There are serious guts in the song structure and delivery, and each verse is well rehearsed and thought out.

I’ve been doing this reviewing gig for a couple of years now and have a knack for knowing what direction of us will take be at low high harmony breakdown etc. ANITS follow the script perfectly but write their own fucking lines to suit themselves, and more power to them for it. This truly is an insight into five guys doing what they really feel like doing I just hope they really keep doing it. 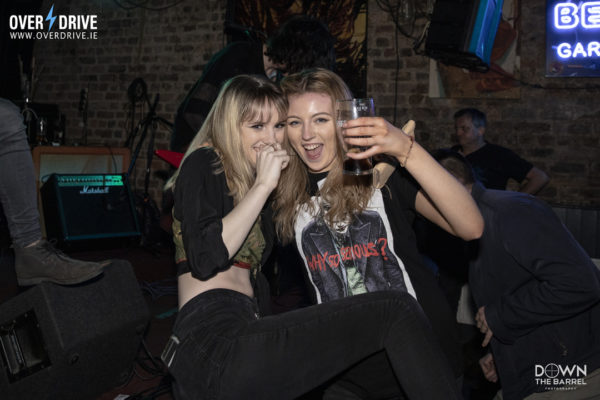 AeSect get the crowd vote, A Night In The Snow get the judges votes, and Organ Blender get the wildcard to join Holocene Extinction, Trenchknife, Grey Stag and Virgin Converters on the Wildcard bill, to be decided by the internet for a performance show on April 13th. 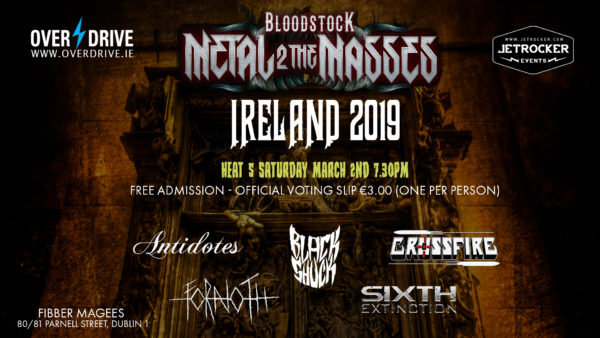 Full photo gallery, courtesy of Down The Barrel Photography © 2019.

Tickets for Bloodstock Open Air 2019 are on sale NOW! Pick up you’re via this link ASAP!