We’ve passed the halfway point in the heat stages of Metal 2 The Masses Ireland, and let’s just say the decisions aren’t getting any easier. 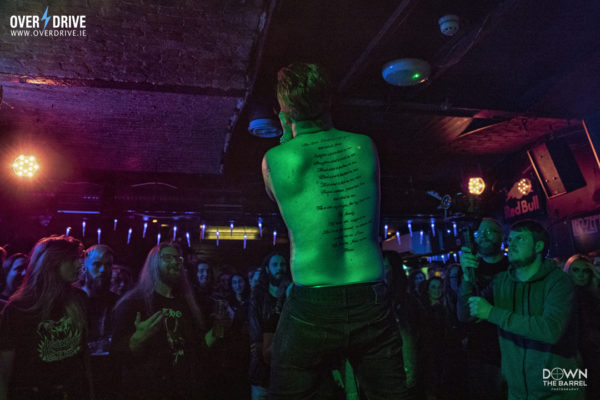 Five more bands line out for the opportunity that so many crave, to share the limelight at Bloodstock Open Air with Sabaton, Scorpions, Children of Bodom, Parkway Drive and dozens more metal maestros.

There are new faces, old faces, and some faces that have joined forces with former combatants in this journey, and let me tell you – this one is full of surprises.

Five-piece metalcore act Antidotes, (who were a four-piece until the departure of longtime frontman Stephen Cannon), are back in Metal 2 The Masses with their brand new frontman Dean Donnelly, previously the frontman of Call to Arms. 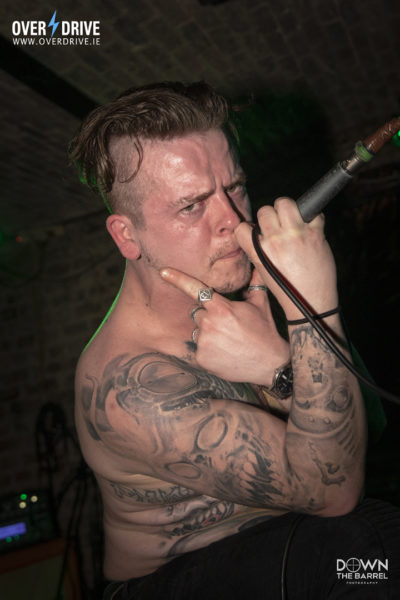 The floor is full at 8:30 p.m. as two pretty well-known underground bands have come together to cause havoc in the music scene, and they’ve been pushing this online for quite a while. Whilst Donnelly admits to being a little bit rusty, to be honest, I can’t really be held against him. Both he and guitarist Cormac Turnstead are the newcomers and have firmly put their stamp on Antidotes awesome setlist that saw them get into the Grand Final in 2018.

Donnelly’s stage rage hasn’t dissipated during his time off, and he is every bit as ferocious as he was with CtA in the dominance of the audience. I feel he is grown as a vocalist since his last band: I know they were his crew back then, but we all go through changes, and you don’t find anything that has more constant changes than in the music industry.

Guitarists Gaffney and Tunstead must suffer from mind-meld of some kind, because in their third song “We Are”, a filthy harmonised solo fill was pulled off by both men and that was pitch perfect and note perfect. Drummer Donal Bowens does a fine job of his section, and bassist Leigh Walsh does more than hold his own.

Antidotes most ferocious song “Stand Your Ground” is met with a lot of fervour, as it’s still an absolute belter. It’s an old favourite and Donnelly has made its own, and this is a big boost to the relatively new grouping. 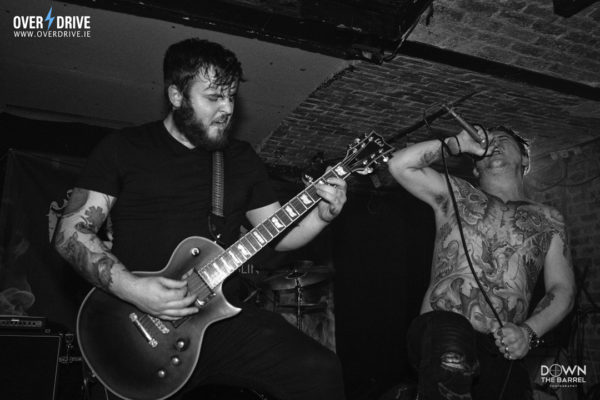 I caught up with Donnelly after the show and he actually admitted that he felt a little bit out of place: “The hardest part of the new spot is singing Stephen’s lyrics as I believe them just as he did when he wrote them“.

I wasn’t sure at the start as they began a little bit shaky but that notion is put to bed pretty quickly based on this performance. These concerns were settled in about 3 minutes flat into the set list and it seems as Donnelly was almost moulded into this position with Antidotes. Absolutely stunning stuff from the brand new line-up, and we look forward to seeing more of them in the future. 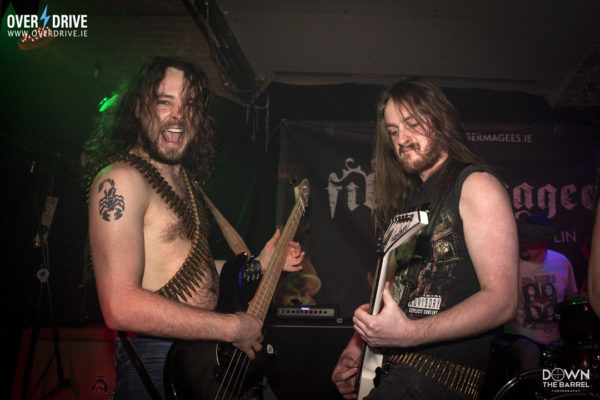 Crossfire
is a four-piece thrash metal monster from Dublin. Here is another band that has previously run the gauntlet of Metal 2 The Masses, and are still burning through the barriers that kept them down last year.

Lead guitarist Kevin O’Connor absolutely tears the crowd apart with his substantially amazing two-handed tapping solo style, and their very first offering “Book of the Dead”, but the real test is in the second offering of “Who Goes There”, in a masterfully executed harmony fill in line with something out of “Ride The Lightning” or “…And Justice For All”. 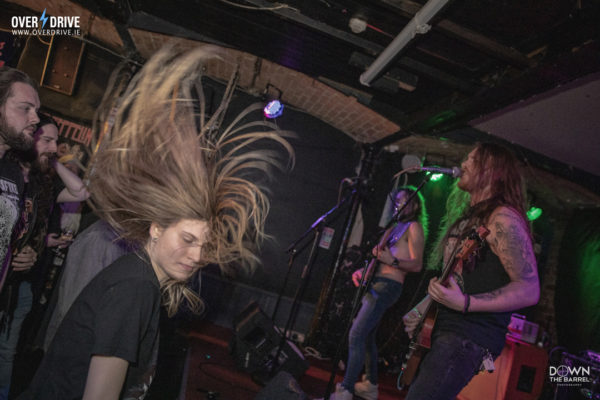 This band is drenched in Big Four; the influences are all over the setlist 35 years on. Megadeth, Metallica, Slayer, and Anthrax are still inspiring young bands to follow in their heavily worn boots steps. The flair of drummer Dan O’Connor and rhythm guitarist Matt O’Brien is seriously hardcore.

However, the flamboyantly dressed bassist Conor Jordan is attracting quite a lot of attention with this Pancho Villa bullet shoulder straps which look reminiscent of Derek Smalls from “Spinal Tap”. 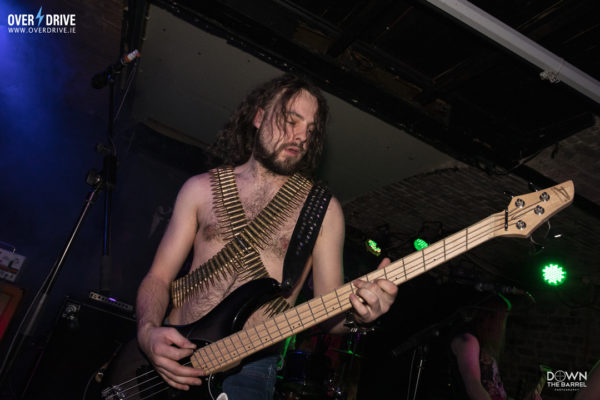 He does most of the backing vocals but his playing style is right up there with some of the best in the contest and the crowd is now truly alive and kicking. Pits, windmilling, and songs about beer… what more could you want at a thrash gig?

Sixth Extinction are a five-piece heavy metal band straight out of Clonmel, Tipperary. The jaws of hell have opened when the band kicks in the door on the third slot tonight.

Singer Liam Ryan has a Zakk Wylde stance which is mean and monolithic and is a powerful totem of focus for the audience tonight. From their last record “X and Why”, which was released last year, “Gallows” is their most brutal song, and it by far does the most damage. 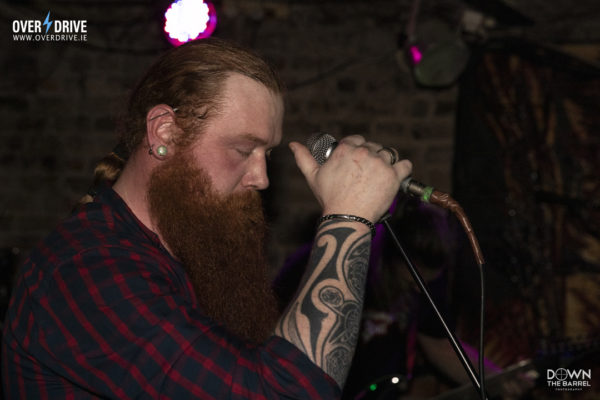 The guitarist section manned by Wojtek Orlick and Dan Fogarty is superior in simple, effective, and bone-shattering riffs: it’s an absolute delight to listen to.

Through the setlist, the pace doesn’t load up for a single second. Fifth song “Nectar of the Gods” is an odd one -it has a slightly misplaced off-beat rhythm section, but then you get a right hook to the jaw with the chorus and outro. Such is the weight of that particular tune, that a scales would break.

The final song “Eulogy” however, really lets the dogs run wild. Drummer Grzegorz Skowroński and bass player Lucasz Ryz have a hell job keeping time here but they make it look like there is absolutely no hassle to it at all.

At this point, a serious amount of moving is going on in the middle of the floor, with a lot of really dirty heavy headbanging action that takes place just off stage. It seems at this point of the night the crowd are really getting into the gig more and more as time goes on, and we at the judges’ table are just watching the carnage unfold. 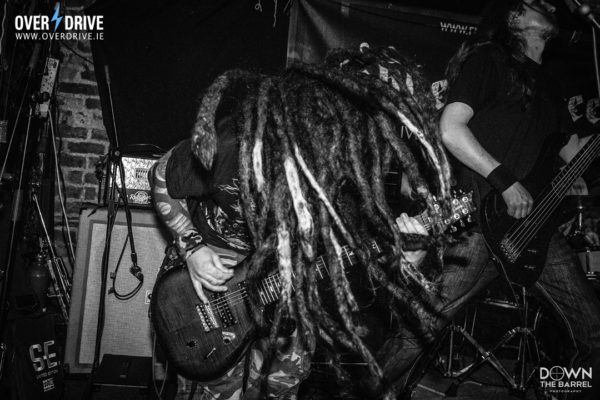 Fornoth are a five-piece death and doom metal outfit that are really taking us by surprise. They are the dark horses of the line-up tonight, as nobody really knows much about them.

Starting off slow and gloomy, they break out the big guns in the middle of their very first song “Sorrow”. This was a real surprise as I expected something completely different based on how they started their setlist. 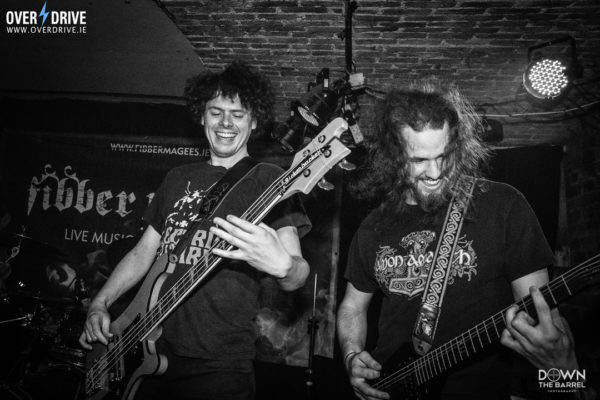 Throughout their first few songs, their tempo and direction change in timing, blast beats, and breakdowns. Singer Daire Coburn is positively maniacal, as his depth and vocal range is pretty full-on batshit crazy.

The chunky headbanging riffs have lit the place up and they’re doing pretty well as their setlist continues. The audience is getting behind the band throughout their performance all the while guitarists  Charlie Appleby and John Appleby look like their heads are going to spin off. 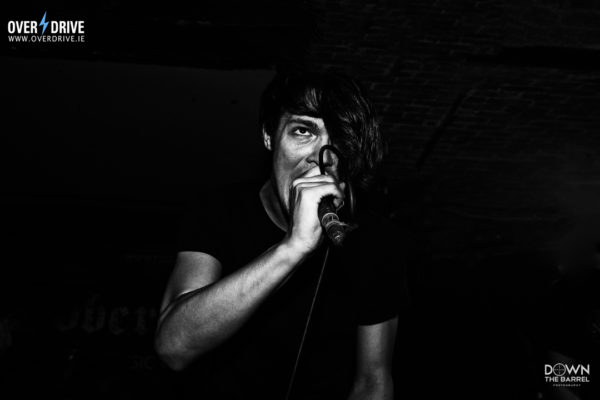 I’ve only seen windmilling like that in two places: Nathan Explosion from the adult swim cartoon “Metalocalypse”, and George “Corpsegrinder” Fisher from Cannibal Corpse.

Playing the drums is Oscar Little, but the name does not maketh the man in this instance, as he is an absolute monster behind the drums; it really does look effortless.

The immensely talented bassist Bill Thompson is bouncing all over the stage and seems to be thoroughly enjoying himself immensely. The focal point of Fornoth is frontman Daire, as he is a stage presence that has so far held the crowd in total captivity.

The electricity is palpable right now, because just seem to be falling into place for him. The crowd is losing its mind, the beers are flowing, and everyone just seems to be having a really good time. Like I said at the start – this band caught me unawares, and I think it did the same thing to a lot of other people as there is nobody standing still as opposed to how they started. This was a phenomenal opener for a band that is so relatively less-known, and I think big things are in store for these guys. 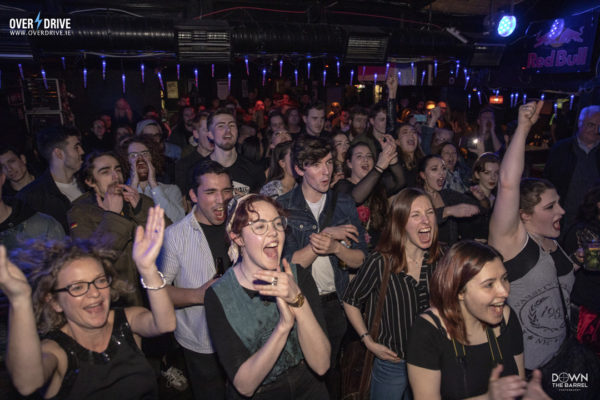 Black Shuck are three head-cases from Galway who love what they do. Groove metal pave the way for some of the most beat laden music we’ve heard all night and it comes from the very last band.

Halfway through the first set first song, guitarist/vocalist Brendan Murphy and bass player Thomas Doherty  jump off the stage and play the remainder of the song in the middle of the floor. The drummer Ian Doherty, with his cracking breakdowns is there onstage too,  and they are seriously, seriously heavy.

The cymbal  crashes and snare-work is perfectly in line with the song structure, and they don’t really take any prisoners. Murphy effortlessly pulls off some of the great talents of being a frontman, which is keeping time while supplying some of the heaviest tunes tonight on guitar, and his high-pitched, lung bursting vocal range are a testament to his talent as he pulls off an incredible performance. 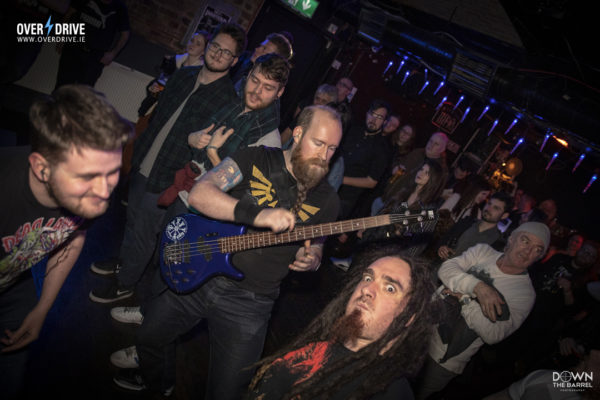 Bass player Doherty also has his wicked way with the crowd as he’s doing his own thing with a bassline structure that is not in sync with the guitar work, but ties in perfectly to create an absolutely monstrous sound. The entire joint is getting behind the music and the viscosity of crowd action is getting out of control.

All three guys are doing an amazing job of keeping the audience engaged and Black Shuck leaves us shook, and they have seen to be absolutely unstoppable.

Fornoth snags the crowd vote, as Black Shuck blow us away completely by taking the judges vote. Antidotes get another crack of the whip by joining the wildcard online public vote which goes live on April 1st. 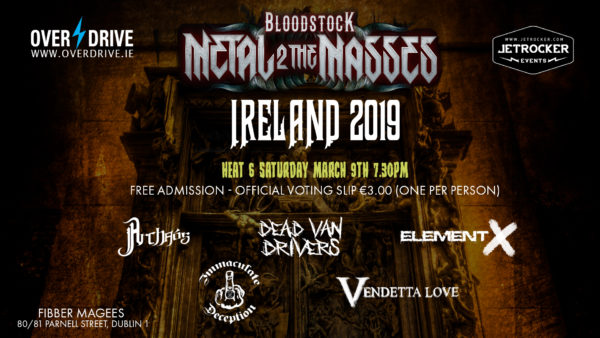 Bloodstock Metal 2 The Masses, Heat 6 takes place on Saturday, March 9th in Fibber Magees on Parnell Street. Doors from 7.30pm. Admission is Free and official voting is just €3 (one per person).