The final round of the heat stages is here and the competition is as sharp as ever. This is the end of the group stages where at the end, all 35 bands will have taken part in a bid to wow the judges and the crowd to secure a spot on the semifinal roster. 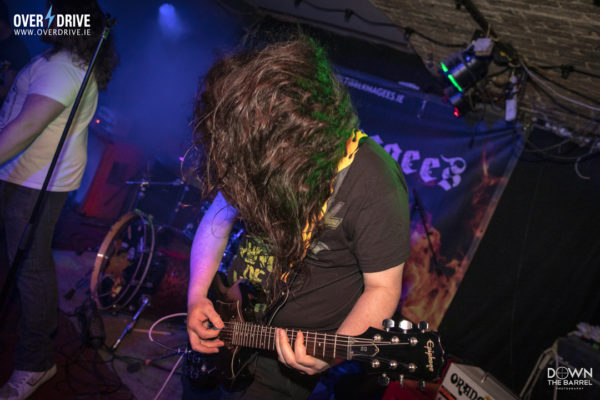 The opportunity to have their names on the same bill as Sabaton, Parkway Drive, Anthrax, Scorpions, Children of Bodom and more is too much of an opportunity to pass up, and each of the bands has tried everything they can to get to the next step.

Creeping in from below like a snake, Infectious start their contagion spread with a sly,  gradual intro into the first song of the night supplied by guitarists Mark Dempsey and Aaron Gilbert.

Frontman Mikey O’Riordan pours his heart and soul into the very difficult time of 8:30 p.m. which is the opening spot and as always the toughest on a Saturday night. 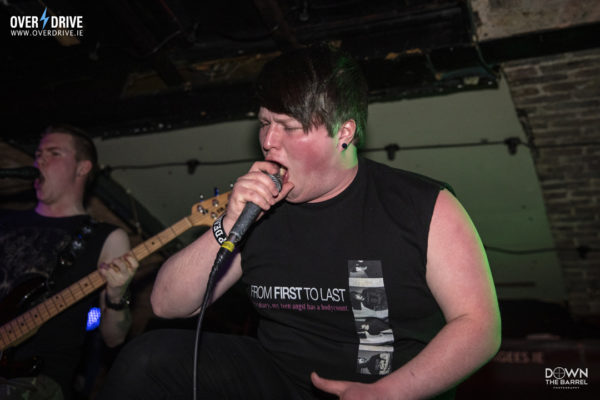 It doesn’t deter any member from digging deep and giving 100%,  as this is the very final chance that any band will get to progress from the heat stages.

From here on in, the level of competition doesn’t get steep, it gets vertical. O’Riordan’s vocals are sickly deep, and not many singers in his competition have the approach that he applies to his role. Bass player Dylan Monahan supplies the backing vocals and complements the frontman’s effort to bring the crowd to life.

Drummer Jake Purcell keeps the timing of the incredibly complex and riff-laden songs and the audience is gradually getting more and more into the groove. Dempsey also supplements the riff-work on some serious tunes like ’Atrocity’ and ‘Vision’. 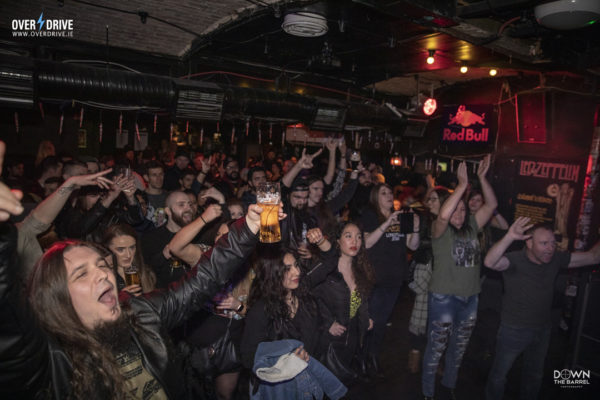 The breakdowns are high octane, the single string and open chord fills really tie the song structures together, and works absolute wonders for their sound. This is a huge improvement from Infectious since witnessing previous, and it’s a good thing to see that with the addition of Gilbert on guitar, it allows more freedom for the guitar section and indeed O’Riordan on vocals to explore the song structure and abilities even further.

Led by bassist and vocalist Eoin O’Connor, the band firmly have their roots planted in 1980s-era death and black metal, not unlike ‘Schizophrenia’-era Sepultura.

Guitarist Jack Ahern furiously belts out the riffs over their 30-odd minute setlist. Drummer Sebastian Garowy also bumps up the speed with outside-the-box drum techniques that fall into perfect synchronicity with O’Connor’s vocal approach. The general vibe (I think), is to make as much noise as possible and have as much fun doing it for. 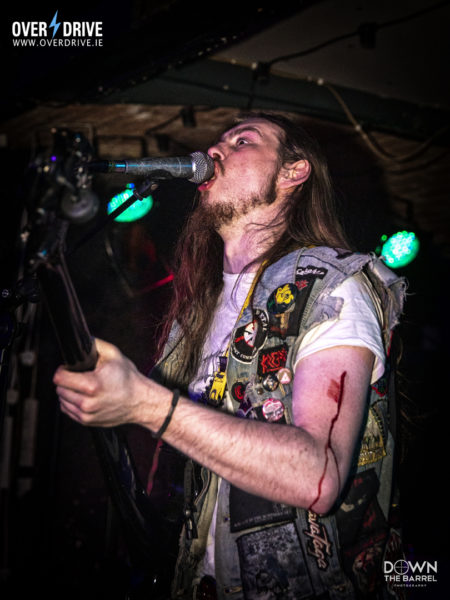 In the metal music world, there are no prizes for sounding just like somebody else or emulating someone else. Nobody got anywhere trying to be a copy of somebody else and having it as their long-term battle plan for international recognition. Imrama, although guided by 1980s death metal, are forging their own path.

Things take a bit of a bizarre turn, however, when O’Connor takes a knife that he had hidden on him on stage and decides to open his arm with the blade. He then licks the blood oozing from his wound and spits it into the crowd. Unorthodox approaches in metal and rock are encouraged, as it helps you to stand out, but self-mutilation is absolutely not.

That’s not ‘metal’ in any form in the 21st Century, especially when the blood is also in the microphone, and somebody else has to use it after you’re finished with it. After this episode, he is then escorted from the venue by security. This was a very odd end to their incredibly novel and seriously heavy setlist and left a lot of scratching heads as to why he thought this type of behaviour was acceptable. 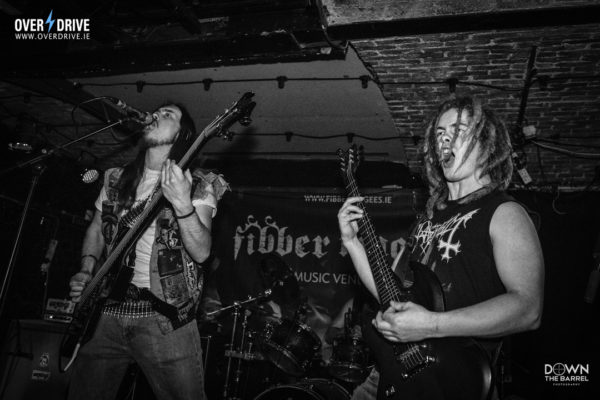 Guttural lyrics, chinking guitars, pounding drums and a formidable poise kick Fibbers into a fully upright position at the halfway stage tonight with Following the Signs.

Vocalist Dan Hayes definitely reignites the vibe, because there are more and more people starting to make their way into the floor area in front of the stage. Guitarists Noel Crowley and Dan Moynihan work at a trojan rate with intricate string harmonies that can’t be easy to come up with, but their songs ‘Say Goodbye’, ‘Fight Back’, and ‘Disengage’ have enough breakdowns to keep the A.A. in work for well over a year. 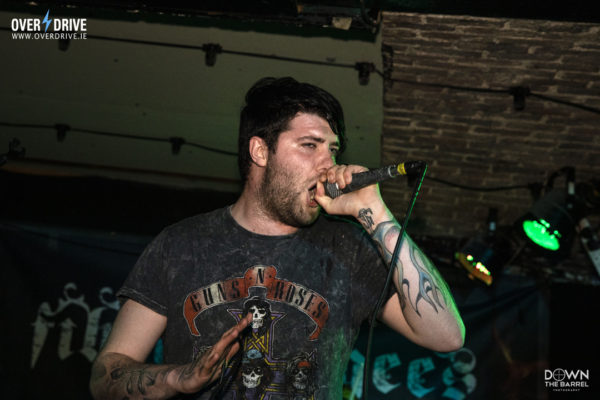 The drum section is maintained by Jack McCarthy and surpasses the necessity for cymbal and snare overkill to make the song sound good, but it’s honestly the cherry on the icing on the cake for most of their setlist – it sounds serious.

Bass player Rory Taylor just stands there headbanging and it seems that his job is just to enjoy himself. Where do I sign up for a job like that!? As more people make their way into the band area to see what’s going on, the vibe is getting seriously interesting at this point.

More and more heads start to nod and then start to bang and start to thrash around, enjoying the music of FTS’ down-tuned and dirty setlist with notes of Slayer, Korn, Motionless in White and Lamb of God strewn through their song structure.

Definitely, a band to keep an eye on and hopefully, more things will fall into place for them in the future. 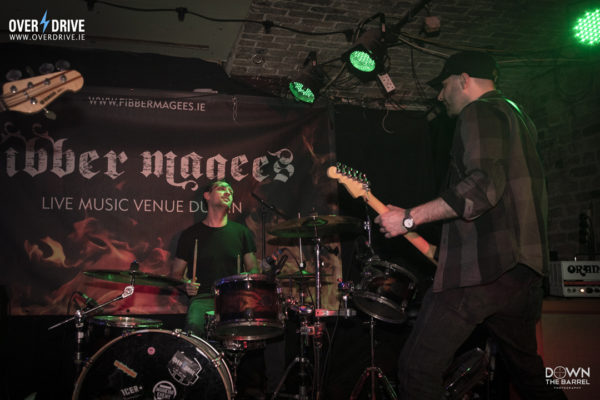 Hard rock trio Dirty Power really turn the focus on themselves, building on the performance  Following the Signs did before them. Not as heavy as the three bands that preceded them, but the dynamite quality of their songs are remarkable enough.

With tinges of Rage Against The Machine, Soundgarden and other 90’s flavours, the three-piece comprises of vocalist and guitarist Brandon De Belder, bass player Marek Bero,  and drummer Jerry Sadowski. 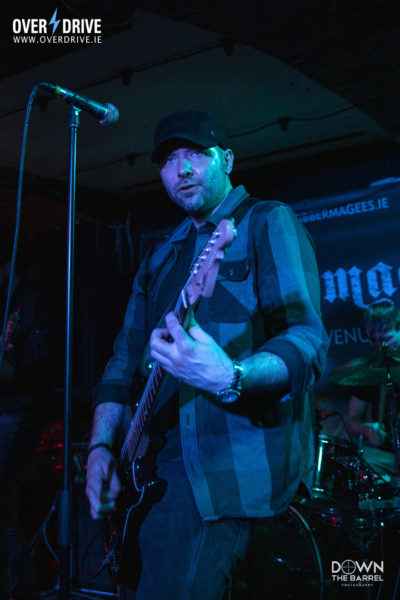 These three guys combine forces and shell out some serious headbanging and foot-stomping tunes tonight, mixing heavy with mellow, stoner rock and grunge, and seriously impressive instrument skills from each man on stage in each department.

Dirty Power has untouched energy, that is clear to see tonight, because each of them is equally and highly experienced with their craft, and their rock and metal infusion of several genres garners respect from not just the audience, but also the judges stable.

The crowd is steadily growing in volume and it is gradually becoming very hard to move around. People are starting to dance and to really get into the groove of the music with her novel and funktastic effects. An absolutely stellar setlist from the relatively unknown group, and here’s to seeing them perform many, many more times in Dublin.

Creep is back at M2TM 2019 to take another swing at the opportunity to play Bloodstock Open Air in Catton Hall. Before the second song has even started, the venue was full. Singer Jason McGuinness is no stranger to the Fibbers crowd, and the band brings a toy to play with in the shape of their new song ‘Mine Temple’ (working title), that is being played for the first time tonight. 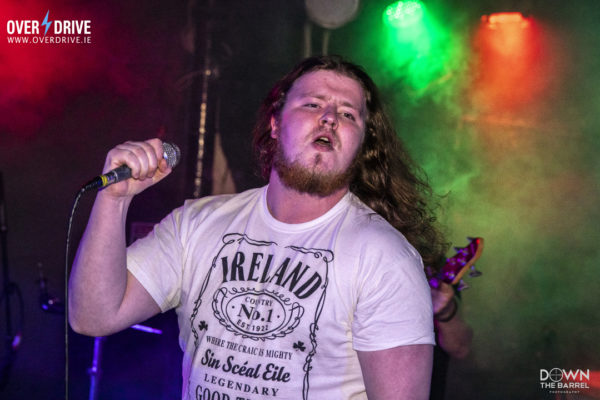 The audience really seems to love this and it shows with the appreciation, volume, and applause that they get when the song is ended. Guitarist Liam Noctor can seriously shift between lead and rhythm sections pretty much anytime he wants, and some of the shredding is amazing.

Bass player Paul Wallace has his own groove going as does drummer Layne McGuiness. The chillout session in song number four ‘Bliss’, as many people swaying in unison. Vocalist, McGuinness makes light of the earlier knife episode from Imrama’s stage show, and everyone takes it on board in good spirits.

But Noctor SHINES in an amazing SOLO in the following tune, and the band has their final song ‘Aurora’ to really bring the house down with their dirty grungey wizardry. 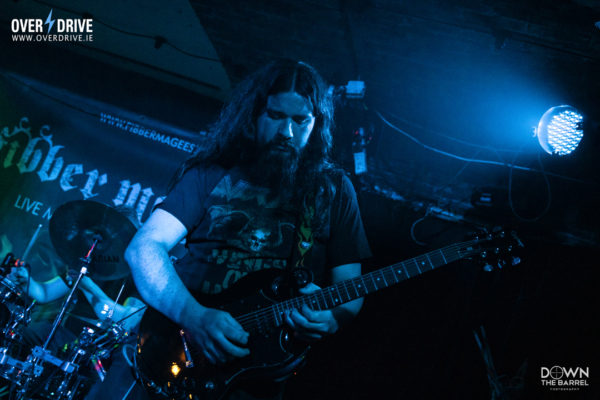 This is a very fitting end to the Heat stages of M2TM 2019, and the wildcard night will really be something unmissable as each band in that event will have already made their presence known in this competition.

This will be the final crack of the whip before the semi-finals start in later in the month, and once they’re done, the spotlight will really be on them because there will only be one chance to get that spot in the Grand Finale, where Simon Hall will call the shots. This is going to get very interesting

The results from the night’s performances were as follows;

The Wildcard Show will be taking place on Saturday, April 13th in Fibber Magees with FREE ADMISSION. Official M2TM Ireland voting is just €3 (one per person) and winners will be announced at the end of the night.

Down The Barrel Photography Photo Gallery.