So here we are at last – the night that we’ve all been waiting for. The night that one unsigned Irish band will walk the hallowed ground of Catton Hall and play the Bloodstock Open Air New Blood Stage. 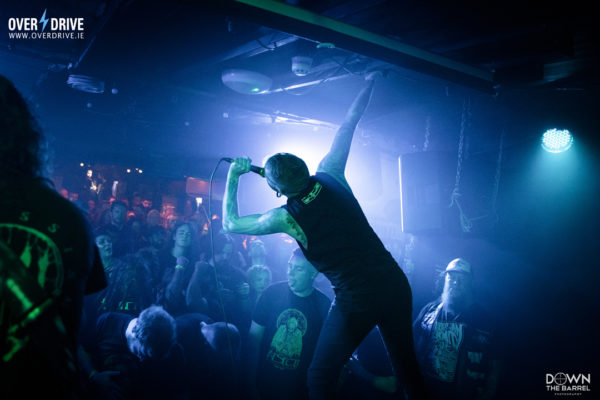 Artist booker Simon Hall is in attendance tonight and will choose the band he deems most worthy of the opportunity to get the job done.

To say this night was tense is an understatement.

Symphonic metal 6-piece, Old Season drive home the old-school melodies bright and early at 8 pm. It no longer matters what the crowd thinks at this time, for their work is done.

Simon Hall is on-site and is taking absolutely everything in. Axemen Jimmy Kiernan and Jimmy Blanchfield hold their nerve perfectly in the opening number with their dual harmony-laden guitar work setting the pace for a seriously heavy and melodic serenade. 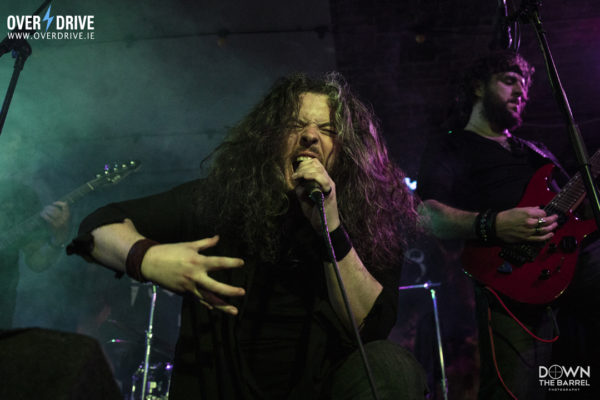 Vocalist John Bonham has his lungs warmed up and greased to deliver a beast of a performance, especially in their 9-minute opus ‘Nevermore’. Keyboard player Dermod Smyth fills in the gaps to keep the atmosphere despicably evil but at the same time symphonically sound. Drummer Anto Walsh ties all of the loose ends together and his double bass assault is endlessly perfect in their final song ‘At the Hollow’. 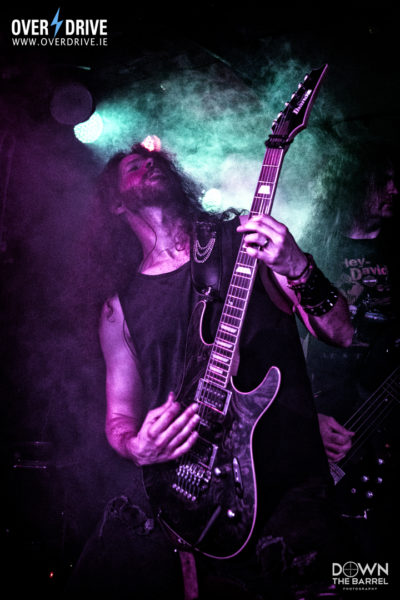 Bass player Dave Copley is totemic behind the scenes and keeps the song spine aligned for the entire musical set. This is superb stuff to kick the night off, and I really, REALLY feel sorry for Simon Hall at this moment because he’s going to have some hell of a decision to make at the end of this night if this is a standard that all bands have to surpass.

Black Shuck bring the sledgehammer to the necks of the competition and swinging with the might of Thor himself. The molten Galway three-piece are absolutely destroying the atmosphere serenely set by Old Season, and are exercising sheer brute savagery on stage. Guitarist and vocalist Brendan Murphy goes batshit with bassist Thomas Doherty and kickoff of the third song ‘Craven’ standing in the crowd. This sets the dogs loose on the audience. Drummer Ian Doherty looks slightly lonely on stage with his two compatriots actually moshing with the attendees in the audience tonight. The brutality of the dirty, bassy metal sound of the Shuck in their song ‘The Hound’ has an off-tempo and feverishly crunching heavy fill set into its main riff. 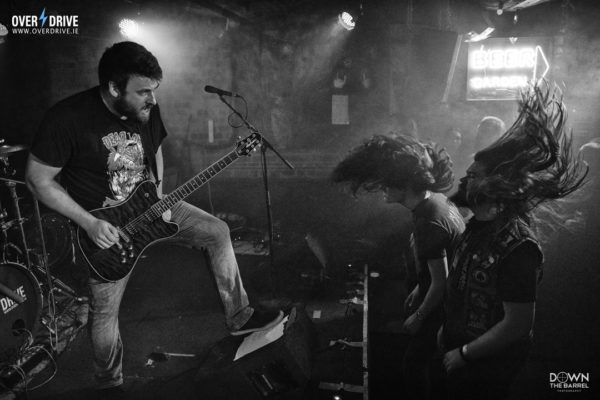 This is a song everybody should have the gym Spotify list because when you listening to it you feel that you can lift a house. Their song ‘Forbidden Fruit’ grabs our fruit and absolutely crushes them. The riffs of their final song ‘Resurrection’ would pick the dead off the ground themselves and shake them back to life. The lads have done themselves proud here, and I seriously urge every metal fan together ear holes on them asafp. 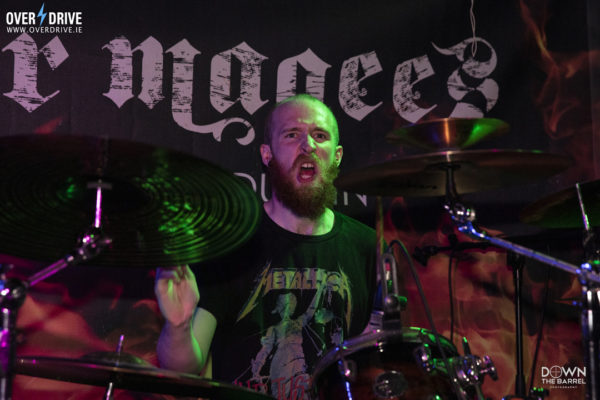 Organ Blender is back to grind us again, and the pit is in full swing from the very first beat. Guitarist and vocalist Padraig McKeown zips through the rhythm and lead guitar sections in addition to screeching vocals, and when these are teamed up with bass player Jason Kiely and drummer Jason Coniry, the result is complete and utter metal debauchery.

In the middle of their set, a small little thing needs to be fixed in the drumkit than only Overdrive El Jefe Oran O’ Beirne can fix and the show goes on again. Crushing riffs from songs like ‘Suction Chamber’, ‘Car Thrash’, and ‘Between the Blades’ only fuel the inferno, and there will be some seriously sore necks tomorrow for a lot of people (myself included) because the breakdowns in their song break bones. 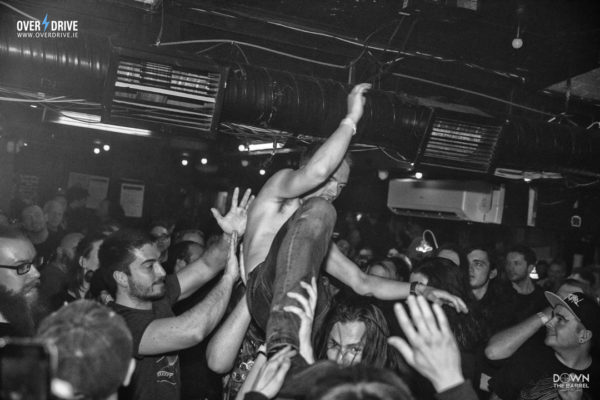 McKeown is a mix of Devin Townsend and Dr Rabid Hell, and then pulls off all of these marvellous tricks while picking at some of the most infuriating and complex guitar work, encompassing arpeggio and open chord arrangement to supply a deviantly gruesome list. 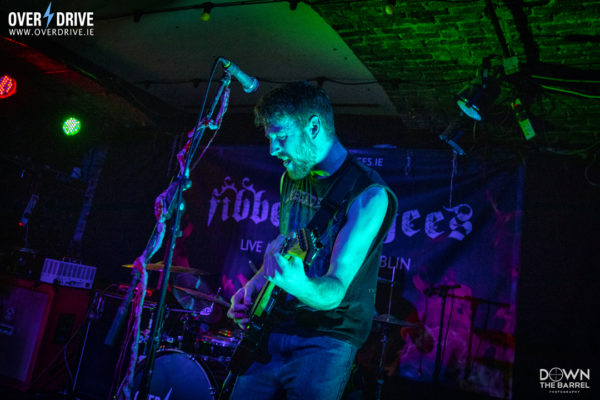 Supplying their own light show, Organ Blender are a must for fans of original and an infusional metal blends – pun intended.

Creep are no strangers to the furore that M2TM is responsible for. Their stage show approach is to start slow, and gradually increase the pressure on the audience like complete pros. 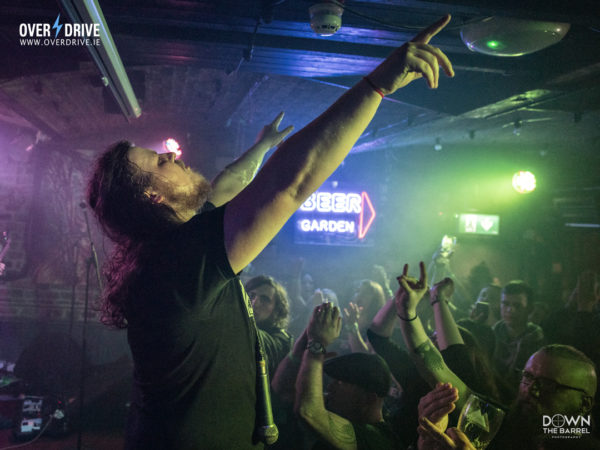 The absolute weapon that is Liam Noctor is as always on top form with a virtuoso-style guitar lovemaking session. Their grunge metal ruckus is head-bangingly awesome as is every show that they have ever played, not just in this event but on every goddamn show played. It’s pure gold. Frontman Jay McGuiness makes sure that everyone knows that the real reason people are here is support music and is humbly thankful for the opportunity to show what the band has got. 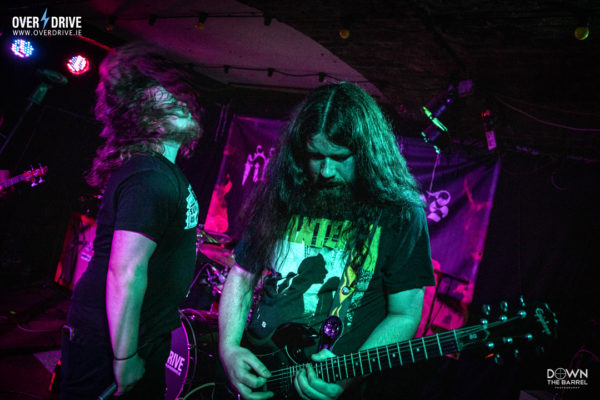 Drummer Layne McGuinness pulls his usual rabbits from the hat and has no issues dealing the dirt into the crowd with the maestro moves on the skins. Bass player Paul Wallace and just stands there and headbangs and smiles and rolls with it which is the ultimate high. The crescendo happening within ‘Mind Temple’ hits like a bullet to the brain. Fibbers just absolutely loses it. Noctor’s on fire, McGuinness is ear fucking 100 + people and the mood is high. This is yet another absolute stellar performance from Creep and just shows why they’re worthy of the final at M2TM in 2019. 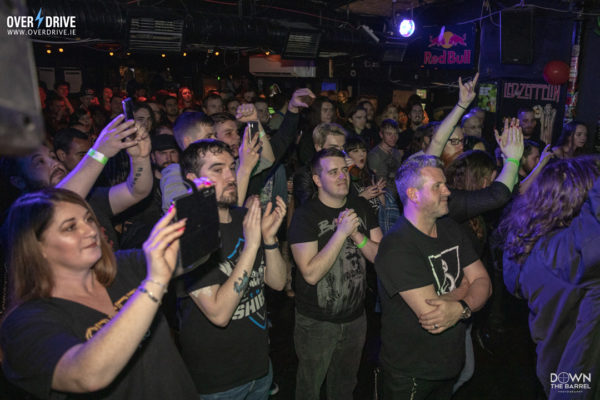 The gaping maw of Hell itself opens as Aesect plug in and run for the finishing line. To say that they’re heavy personified is to proclaim Barney the Dinosaur is purple. Twin shredders Dave Kennedy and Aidan O’Halloran have Fibbers by the goolies and do not let go even for a second. Mammoth riffs are body-blows to the audience and the purpose-built frontman Tony Carberry lands the right crosses to the buckled buddies. 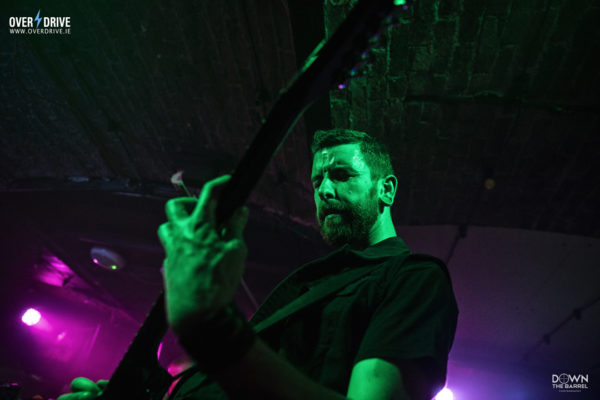 Their originality in song structure oozes from every pore on every man on stage which is absolutely destroying the venue. Carberry does most of the damage in the audience after ordering a wall of death and not failing on the results. Drummer Luke Peters is calamitous on the skin and provides the solid matter for which the crowd bounces off of. It’s so heavy that at one point even Kennedy is on his knees and Carberry is possessed. 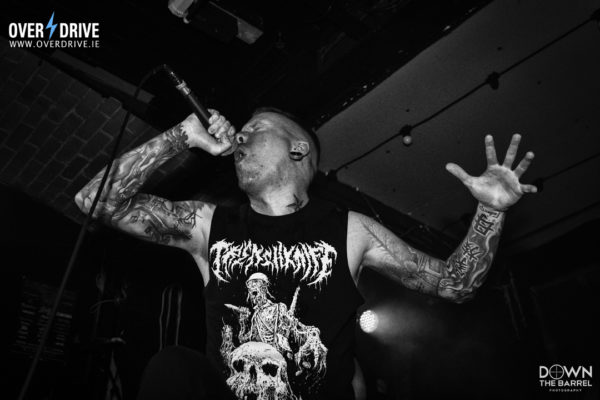 The engagement from the band into the crowd is one of the best upgrades that he has brought to the band and the people revel in it. Bassist Aidan Williams still tries to take flight with his windmilling and he should keep trying because it’s setting the tone and the pace for everybody watching the band to get involved in. Absolutely neck breaking stuff from the lads and this band is going to go really far. 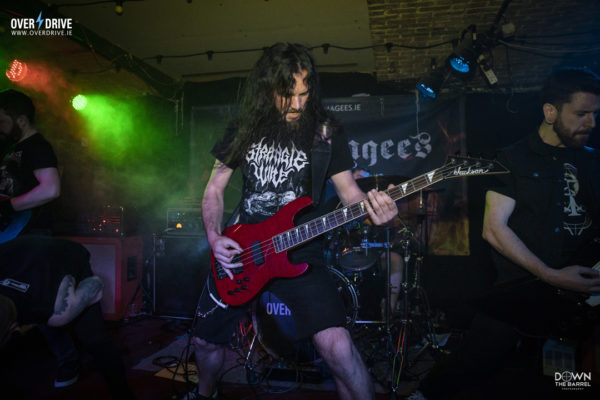 The final band in M2TM 2019 to take a shot at the title is 5 piece metal madness gang Fornoth, and this is indescribable. Every band tonight is BOA worthy, and Fornoth are no different. Guttural vocals from front Daire Coburn propel them into the spotlight. It’s like Lunar Strain-era in flames meets Raging Speedhorn, and everything in between. 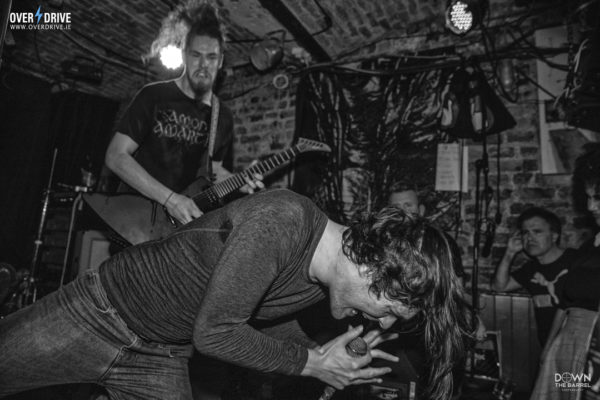 Coburn has the novel idea of hanging the mic from the rafters so he can headbang during his songs and go back to singing when he feels like it. It’s absolute genius, because I haven’t seen it done here before. Harmonious guitar fills perforate the deep, bassy and chunky riffs supplied by guitarists Charlie Appleby and John Appleby. 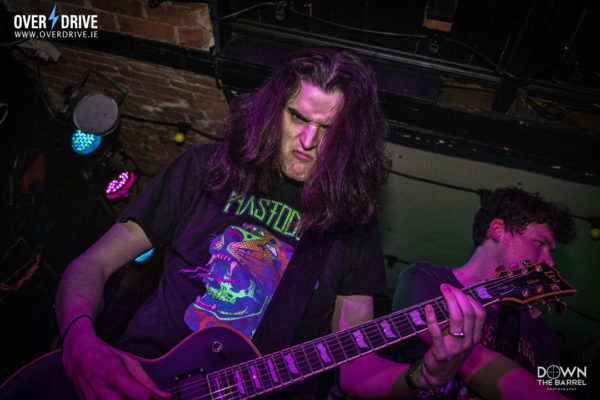 The end result is absolute carnage. There is a sprinkle of Diamond Head in their set but it is dropped down into a tuning that is unrecognizable. The blackened metal upstarts make an unholy mess of Fibbers’ composure because, after Aesect, the chains are off. Both guitarists windmill as if their lives depended on it, backed up by Oscar Little on drums and Bill Thompson on bass guitar. The intensity of this band is obvious and if you were there you’d know that this band has the guts and moxie to know they can go big – it’s just a matter of time. 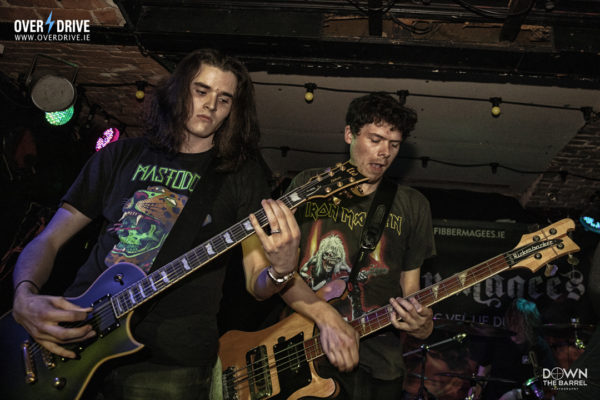 Ten Ton Slug, the winners of 2016 M2TM race return with the slime again as the main stage band for tonight. Guitarist Sean Sullivan is in his talismanic status and the standout figure of TTS. Vocalist Ronan O’hArrachtain drops some slime into crowd to get them in gear and to ensure the props section is well and truly represented. 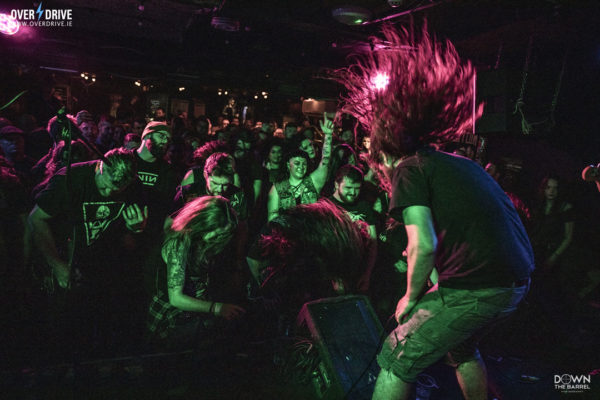 Drummer Michael Sullivan proves once again why he’s the best man for the job with rolls upon rolls of cymbal crashes, dirty heavy breakdowns at sections of the songs like ‘Matriarch of Slime’ and ‘Hunting Ground’, and brand new bassist Pavel Rossa (also from Soothsayer), shows why he was a perfect man to take over bass.

All the while the judges are taking the night off and allowing Simon Hall to rack his brains over who should get the hallowed spot on the New Blood Stage at Bloodstock Open Air this year. The Slug really aren’t a slow band, and they’re dirty, sludgy riffs are enough to have everybody on their feet up front and centre and headbanging with all their might.

This is an old home to them; this is where it all began for them,  and it’s only fitting that the dishy come back is to the roots to try and damage Dublin once again. They succeed and this is a very fitting end to what has been an absolute roller coaster of a year for overdrive and figures by and large. 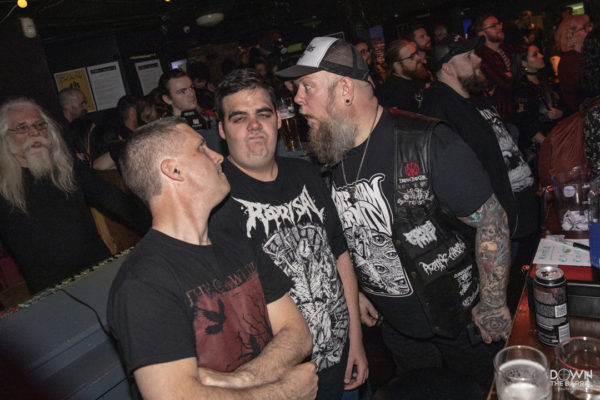 After a tense delivery of appreciation from Simon Hall, Aesect are declared victorious as the winners of the grand final. They will play the New Blood Stage, and Black Shuck will play the Jagermeister stage.

This is another whopper year as two Irish bands go through to play at the festival. They will join the ranks of Zhora, Na Cruithne, Ten Ton Slug, Two Tales of Woe, Snowblind, Psykosis, and This Place Hell as the latest additions to the elite winners of this national competition.

We start all over again in October, so we’ll be seeing you again very soon to suit up and charge into the battlegrounds of M2TM 2020! My heartfelt thanks to Oran O’Beirne at Overdrive, Steve Dempsey at Down the Barrell photography, Robbie McCabe at EHT Promotions, the staff and management at Fibbers, the resident sound wizard JC, and you all those readers and attendants that have been with us from the start. Peace, love and metal!! 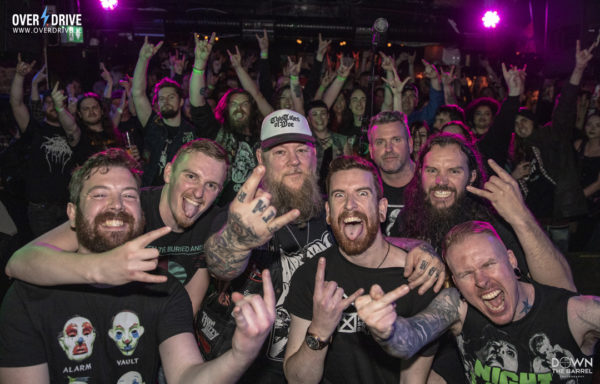 Check out the full gallery below, courtesy of Down The Barrel Photography © 2019