We finally can see the back of January and what a way to start the beginning of the new month. Metal 2 The Masses Ireland is firing on all cylinders tonight with a stacked line up of blood-thirsty bands looking for a place at the highly coveted semi-finals this coming  April. 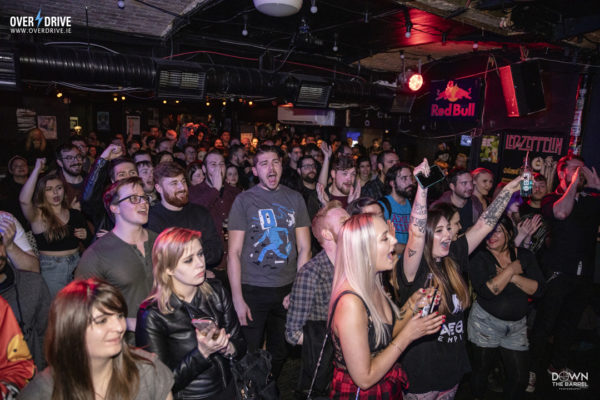 As round two of 2020’s Bloodstock Metal 2 The Masses Ireland prepares for war, a steady flow of punters flows into the venue which very quickly fills up the main venue area in anticipation for tonight’s opening band.

And that task is given to Cork Street Posse. Tonight they are hungry, angry and ready to piss in your Cornflakes, with no fucks given.

Bursting at the seams with energy and visceral aggression, Leigh O’ Reilly and Niall “Smiley” Jackson throw down hard and take the now rammed Fibber Magees down the backstreets and piss-drenched laneways of Dublin city, via their obnoxious lyrical attack and intense stage presence. Jackson’s machine-gun rhythm for spitting lyrics over the punching backing band, accompanied by O’Reilly’s razor-shred scream is truly a sight to behold. Looks of bewilderment, euphoria and utter disgust are littered throughout the venue, but no-one can take their eyes off the stage.

Cork Street Posse opened up tonight’s show with a rusty machete and lobbed a lot of heads off, all the while proving the naysayers wrong, and winning over a few new friends. Up next is Neon Empire, a four-piece electronic metalcore band from Dublin who have only been in operation since last year. Originally a solo project created by guitarist and primary songwriter, Hassan Ali, the band, (clearly feeling the nerves due to the packed to capacity venue), are about to experience M2TM Ireland via trial by fire, and it’s do or die time.

With a sort of post-apocalyptic/futuristic stage persona, Neon Empire quickly finds their feet and proceed to play out a 30 min set that’s loaded with promising song structures and surprisingly good vocals, which is always dubious when dealing with two-part, twin vocalist harmonies. 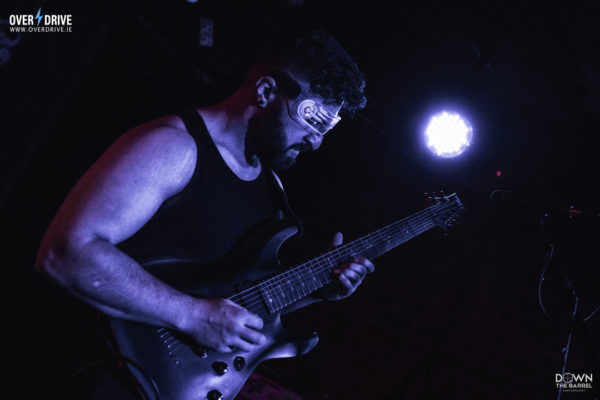 Drummer Veronika Svecova is effortlessly hammering the kit to recently released ‘This Clarity” and it’s going down exceedingly well, with the throng of punters that have wedged themselves into the venue tonight.

Bassist Tom Ambrose and screamer vocalist John Collard (pic below) work the crowd with trepidation at first but are well and truly enjoying the experience by the time they bid their farewells to a deafening roar. 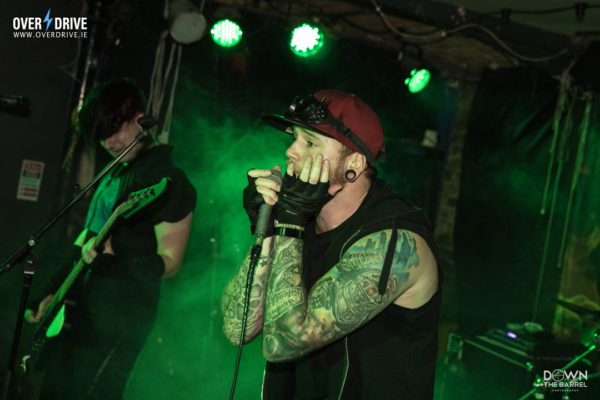 My Soul Divine have returned once again to Metal 2 The Masses Ireland, after making quite an impression last year. The four-piece have a rabid sound that is fabulously gnarly and tailored specifically to barrage anyone that stands in their way.

Coming from Portlaoise/Kilkenny, the four-piece smash their way through Fibbers with bangers like ‘Among Giants‘ and ‘Heaven and Hell‘ with Greg Zielinski looking as menacing as a young Gary Holt. 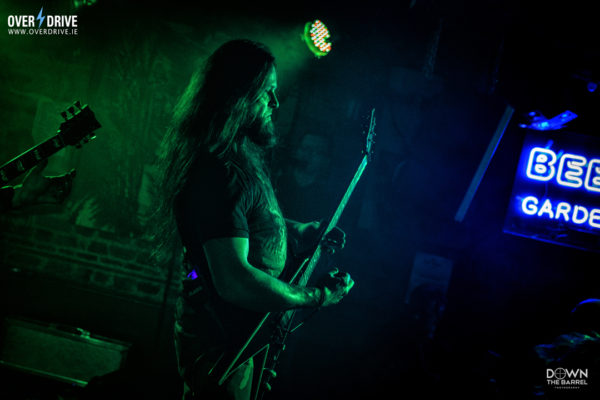 As they plough through a punishing set, My Soul Divine give it everything they have earning a whole new room of fans in the process. By far one of the most promising bands in the Irish Metal scene and one that you should keep your eyes and ears on if you like your riffs dripping with blitzkrieg intensity. 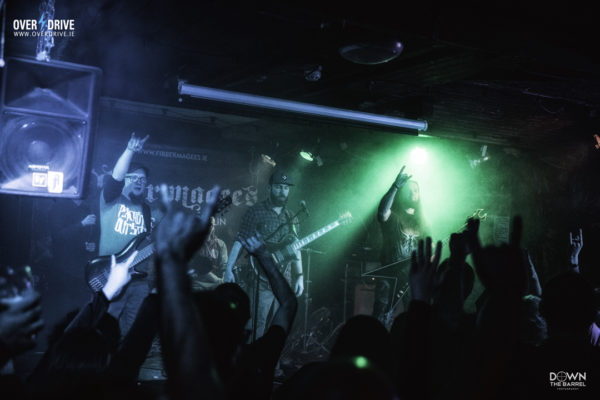 Next up we are treated to Galway’s Psychotic Outsider. A three-piece that delivers a sound that is at times, hard to pin down. Vocalist Nikita Khodakovskaya is just a captivating frontwoman who dominates the stage from the get-go and is relentless in her performance throughout.

With just guitars courtesy of Piotr Michalik and drums (Piotr Szatan), Psychotic Outsider rage through a set that sees Nikita handle the stage with more confidence than any other artist tonight and she’s clearly loving it. 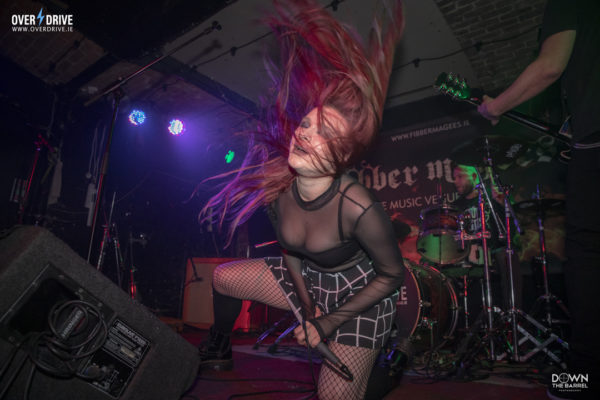 Her vocal range is captivating and chaotic all in the same vein and offers tonights packed venue a multitude of flavours that at times sounds demonic and dreamy, balanced with a thrusting ferocity and commanding urgency.

One of the most interesting showcases I’ve seen to date and a band that I’ll definitely be keeping an eye on, and so should you. 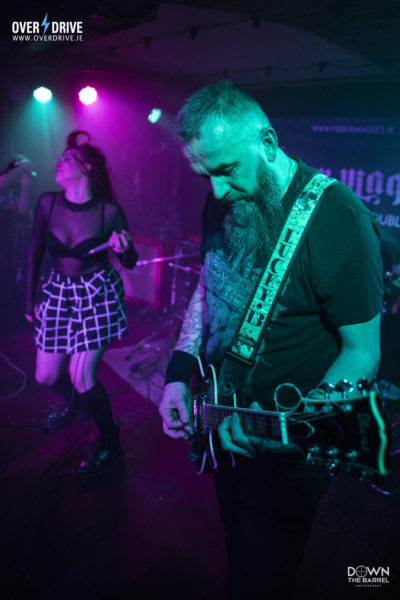 Finally, we round off the night with four-piece Death Metal outfit, The Risen Dread who just pummel the place from the moment they start their campaign of sonic war.

Vocalist Marco Feltrin is just a beast on stage and proceeds to rip Fibbers a new one for 30 solid minutes solid. Joined by bandmates, guitarists William Ribeiro and Fiachra Woods, bassist Mat Maher and drummer Colum Cleary, The Risen Dread are a band that seems like they have been together for decades when in fact they originated in 2018. 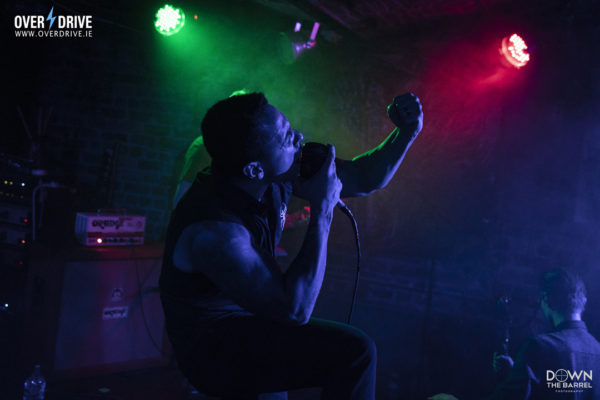 With tracks like ‘Fallen‘, ‘Revelations‘ and ‘Coward’s 9‘ delivered like torpedos, the pit is in full swing, much to the delight of the punters at the back, who gaze on with wide-open eyes and grins on their faces.

With a European tour in the works for April, it looks like 2020 is going to be The Risen Dread’s year. Watch this space. 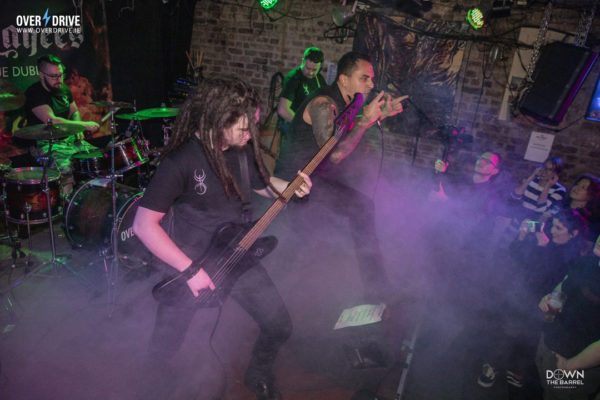 The final chore of the night is down to the judges to count up the votes and deliberate on their thoughts on who will be moving towards the semi-finals in April. At about 12.30 am the news is announced from the stage; 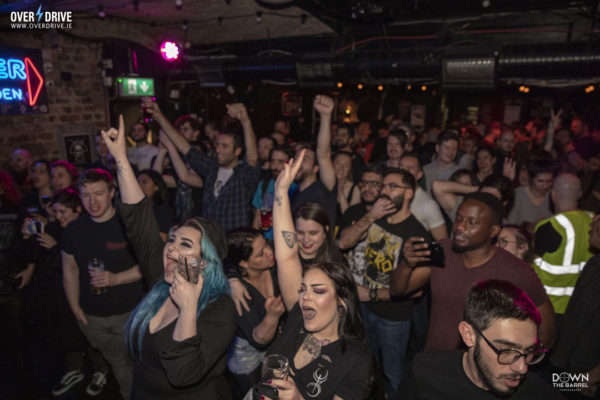 These two bands will join last week’s artists, Grey Stag and Arjuna’s Eye in April when the showcase enters the nail-biting semi-finals. 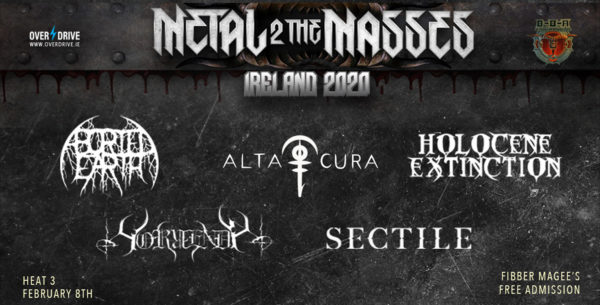 Doors are from 7 pm, admission is FREE and official voting is €3.50. All punters who vote will automatically be entered into a competition to win passes for The Black Crows live in Dublin’s 3Arena on October 10th.

Photo Gallery  – Down The Barrel Photography 2020