Tonight sees the next collection of Irish metal bands take to the stage in Dublin’s Fibber Magees for the second live event of the annual Metal 2 The Masses campaign for 2019, and to say that it’s a tough decision is an understatement. 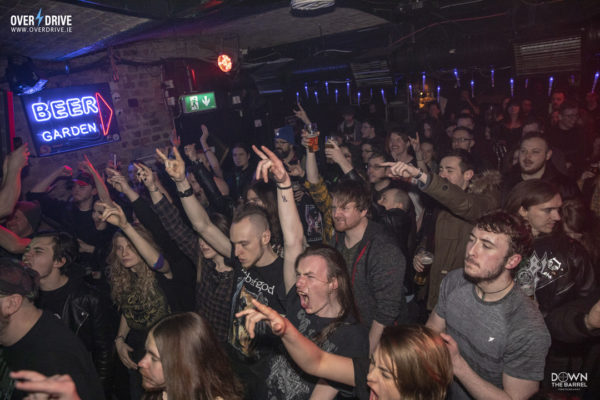 To say that the metal scene in Ireland is in particularly rude health right now is very much a testament to what was witnessed on stage for this past weekends Metal 2 The Masses “Heat 2” event.

With numbers that exceeded close to 450, Fibber Magees was jam-packed with punters for Bloodstock Metal 2 The Masses Ireland’s second event of the year and boy, oh, boy was it some night.

The fact that Dead Label were also making their debut as a four-piece (separate review coming soon) was the cherry on top for what was a sensational night of quality Irish metal.

Taking to the stage first was Limerick’s TRENCHKNIFE, a wonderfully brutal four-piece that create a vicious sound, soaked with Death and Black influences and razor sharp. 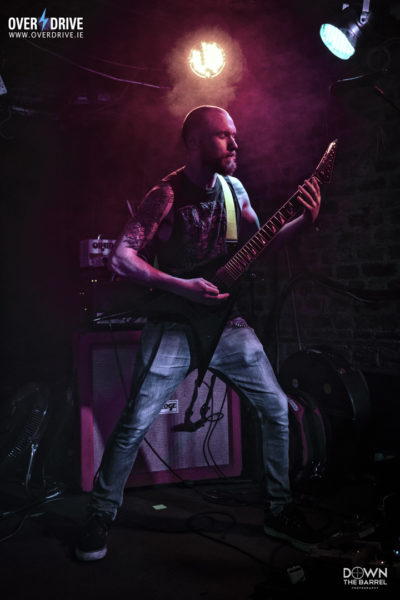 Vocalist ‘Dan’ simply owns the crowd from the get-go and with his bandmates in tow, proceed to batter the audience for all it’s worth, much to the delight of the crammed venue who lap up the bands set with the enthusiasm of a starved alley cat. Featuring members of Shardborne and Three Hour Ceasefire, TRENCHKNIFE are simply stunning and land slabs of sonic apocalypse-like destruction with what seems like the greatest of ease.

We can’t recommend TRENCHKNIFE enough. Top quality brutality with enough fuel in the tank to go a long, long way.

With the venue becoming dramatically busier, next to grace the stage under the watchful eye of the judges is Dublin-based progressive crew, BRIK who display a wide range of genres in their music. Touches of TOOL, RAGE…, and KARNIVOOL creep in here and there providing a sonic landscape for vocalist Antonio Miguez Vega, who rolls out his impressive vocal range to a thronged audience.

BRIK’s ability to surf through the tricky task of genre cross-pollination is mostly seamless, however, can be just a little shaky at times,  but don’t get me wrong, this is top quality stuff from the four-piece, and if you get aroused by the rumblings of TesseracT, Alter Bridge or A Perfect Circle, then this is a band that you most definitely need on your radar. 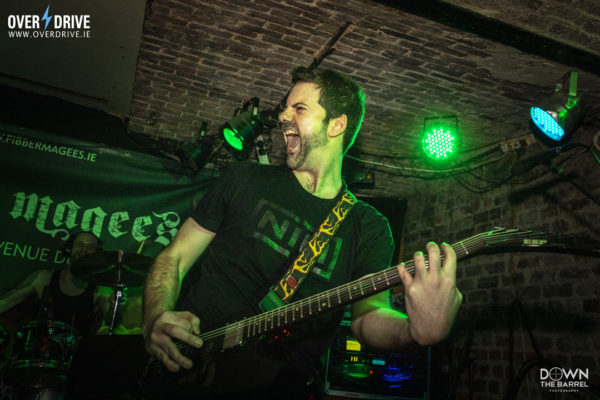 Up next is SECTILE. Having taken part in the previous two M2TM campaigns, this could very well be ‘their‘ year (third times a charm). Having grabbed the public’s attention thanks to their captivating melodies, arrangements and the obvious vocal talent of frontman, Gabriel Gaba, SECTILE blew open the gates with their performance tonight thanks to a with a well-constructed setlist that illuminated the band’s talent and stage professionalism.

I’ve said it before, and I’ll say it again, you need to see SECTILE live and whatever you do, keep an eye on them as they are most definitely going places. 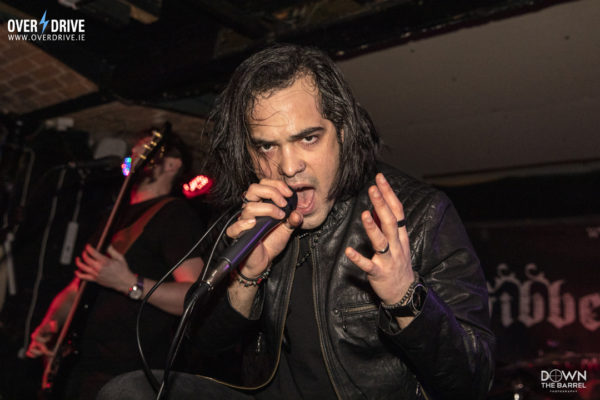 On to the fourth band of the night and PEASANT TO A KING take to the stage and without batting an eyelid open up with a cover of Deftones, ‘My Own Summer (Shove It)‘ which although sounded great, compromised their place in M2TM 2019 as the first golden rule is ‘NO COVERS’. If ever there was a reason to read the small print, it would have been earlier this week.

Covers aside, Peasant to a King, bring a chunky metalcore/hardcore influence to their sound and can harness some irresistible break-downs that at times, have the potential of dislodging even the most rooted mountain peaks.

Vocalist Ben Doyle taunts the crowd from the lip of the stage as his bandmates, Lee Clarke (Bass), James Casey (Guitar), Stephen Keane (Guitar) and drummer Evan Smith lay down a set that’s packed with visceral, piss n’ vinegar. Peasant to a King have buckets of potential, shame they didn’t adhere to the official Bloodstock M2TM rules. Maybe next year they could give it another go. 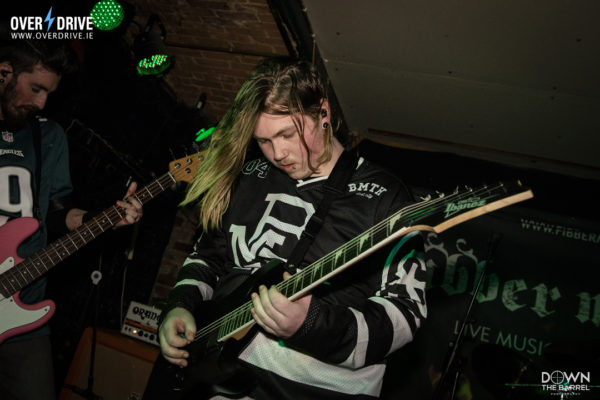 With Fibber Magees now bulging M2TM punters, the final competing band of the night takes to the stage and with GREY STAG’s experience from last years campaign, they know exactly what to do.

A thunderous cacophony of sound errupts across the venue as GREY STAG fire up their engines. Vocalist/bassist, Matt Geoghegan can summon the most unearthly sound from his lungs which is always a head-scratching experience as you would expect similar vocals from the likes of Gothmog (Lord of the Rings, Orc Commander). 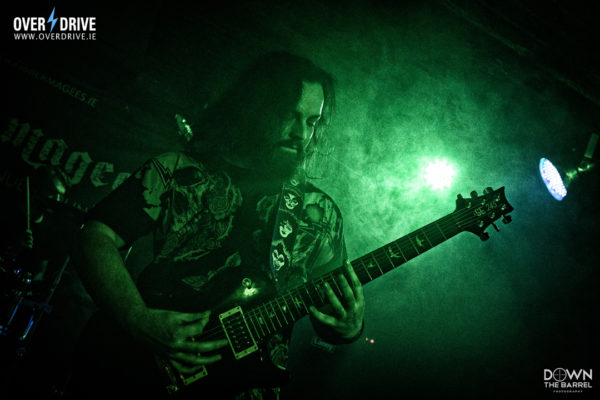 GREY STAGE are punishing tonight. Hitting all the right notes on their sludge/doom/death setlist, bringing a dark and foreboding presence to the venue, which ironically is welcomed with wide smiles and much horn-throwing.

Their latest EP ‘The Guide‘ was released back in September and no doubt, more will follow in 2019. A band heading in the right direction, fast! Get on board while you can.

The final results of the night are calculated and with the judges’ votes locked down, the announcement of who is proceeding is as follows;

The wildcards bands will be posted online after heat 7 with a poll for only five places and will be decided in order of majority purely by the public. Keep your eyes on Overdrive for further details.

The third installment of the M2TM live shows will be held on Saturday, Feb 16th featuring performances from Horrenda, Holocene Extinction, Old Season, Scathed and Screaming Giants. Click below for the official event page; 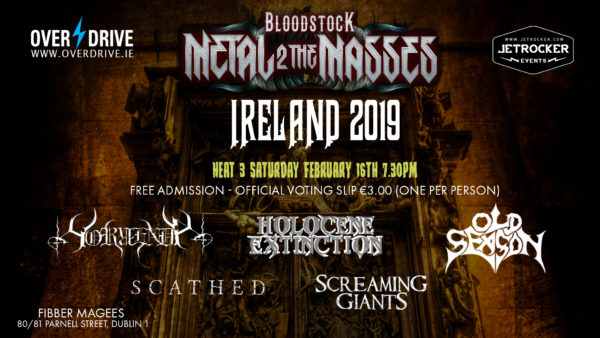 Bloodstock Open Air Tickers are now on sale and you can pick you’rs up via this link. 2019’s headliners have all been announced now with Sabaton (Friday), Parkway Drive (Saturday) and Scorpions (Sunday). 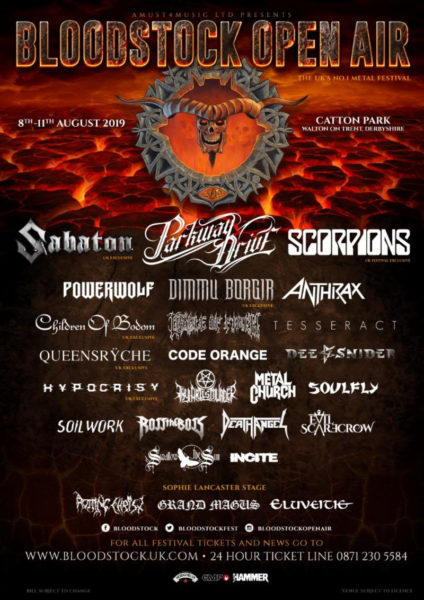