We enter into the third stage of this year’s Bloodstock Metal 2 The Masses Ireland campaign and it’s a tough one folks. Step into the pit for the full scoop… 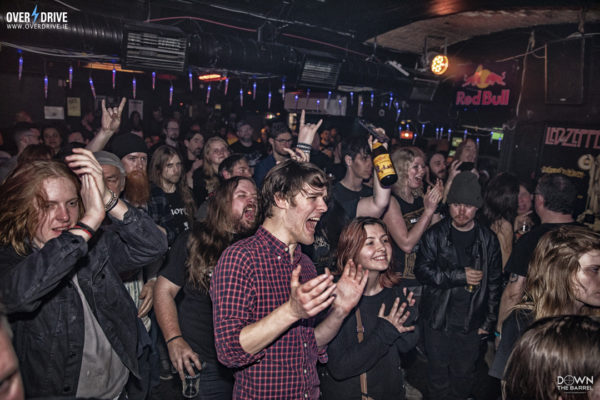 As the raucous Dublin nightlife starts to come alive on the busy Northside of the city, there are five hard-working bands (that have spent countless hours in the recording studio, in their parent’s garage, in their bedroom/kitchen/rehearsal space, or on the road), ready to rock and roll on the stage in Fibber Magees in the third heat of the Metal 2 the Masses competition 2019.

Should one of these bands get through, they’ll share the bill with Sabaton, Parkway Drive, Cradle of Filth, Powerwolf, Children of Bodom and a host of other metal heavy hitters at Bloodstock Open Air festival in Catton Park in August. The night is young, so let’s do some damage! 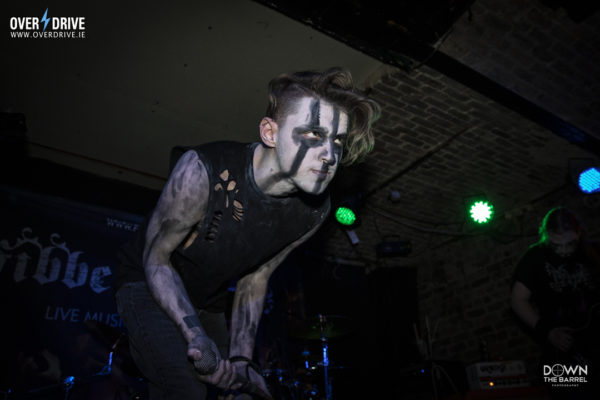 Kicking off the third night of M2TM is Dublin black metal outfit, Horrenda, having been previous contestants in M2TM 2017. They were good back then but didn’t progress past the heat stages. They have learned from their past defeat, and are tighter, more fluid, and ever-so-much-more dark.

Catching airs of Gorgoroth, Watain, and Mayhem,  Arron “Nomad” O’ Shaughnessy  on lead vocals, has the unenviable task of warming up the audience at the opening slot of 8.30pm… not an easy job.

Having said that, he’s not letting it get to him as he makes his way across the stage from one side to the next in a confident and composed manner, and has the vocal range to really bring the house down. The guitar section is heroically manned by Darragh “Outis” O’Connor. 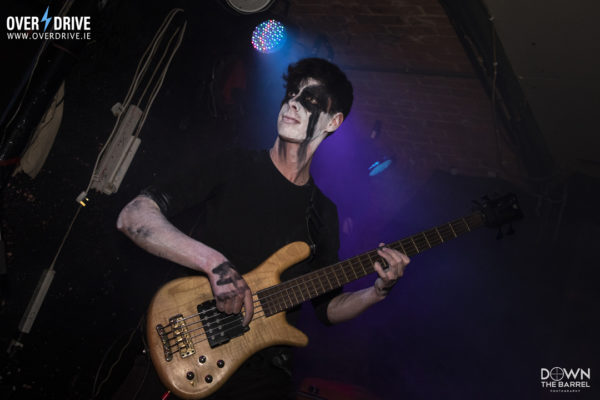 The dirty, chunky, ominous riffs are partnered with Keith “Donn” Smith on bass, and the triad is complete with Daniel K. “Cruxx” Heafy ruthlessly pounding on the drums. The backing tracks that lead into their setlist numbers are distinctly focused on a love of Irish history, and particularly of the Irish War of Independence.

It’s admirable that a band can draw strength from a dark period of our national history and turn it into an abstract genre of metal, and force-feed it to us as people scream at them the audience is in serious gear here as their setlist, compiled of “Eye” and “Royal Decree” are intelligently constructed, but after a quick re-tune, the dropped-D gear is changed, and the form f songs take on a definitively more darkened theme.

Horrenda are a sliver of brilliant gloom in an otherwise monotonous Irish black metal scene; there aren’t that many – so here’s hoping that other bands like them can creep out of the shadows and make their mark in the underground scene in the very near future.

Waterford metalcore quartet Holocene Extinction make their first impression on the M2TM scene and clearly are up for the fight. Flexing their muscles with down-tuned, angry riffs and insane double bass-drumming, H.E. have undoubtedly made the impression that they are not merely newbies that are cannon-fodder; they are here to fight hard, and winner-takes-all.

It’s a crunchy setlist DRIPPING in youthful anger and rebellious pomp, and the channelled anger is a fire that is worth stoking because this band emits pageantry that is remarkably similar to the likes of Killswitch Engage, Beartooth, Five Finger Death Punch, and Silence the Messenger. 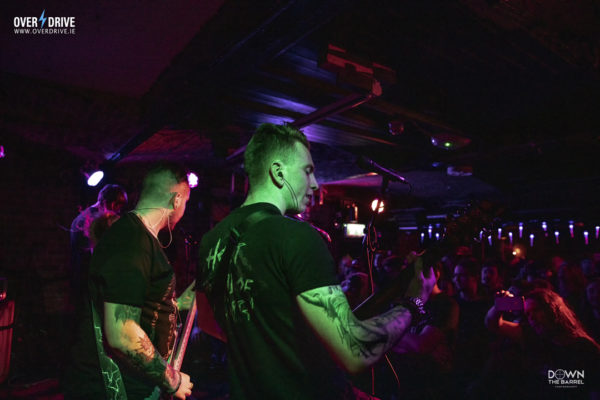 Singer/guitarist Richard Power has the lungs to supply the band with a focal point for the delivery of some serious chunking riffs, and along with brother-in-arms Daniel Wilmott Walsh, supply the shred in a seriously impressive symbiosis: it appears that one feeds from the other, but all energy is spewed into the audience, particularly on songs like ‘Sense’ and ‘Take Flight’.

The volume from the crowd between songs is respectable for a new band on the scene. Bassist Alan Patrick O’Brien doesn’t shy away from the fun either – his underlying alternating bass lines supplement the guitar work, and tying it all together in a nice little package is Samuel Cunningham on the drums. Cunningham makes the skin on your face shake, such is the force and timing of his rhythmic assault on the skins. Votes are coming in thick and fast at the judge’s table, and Holocene Extinction are impressing a lot more than the judges here tonight. 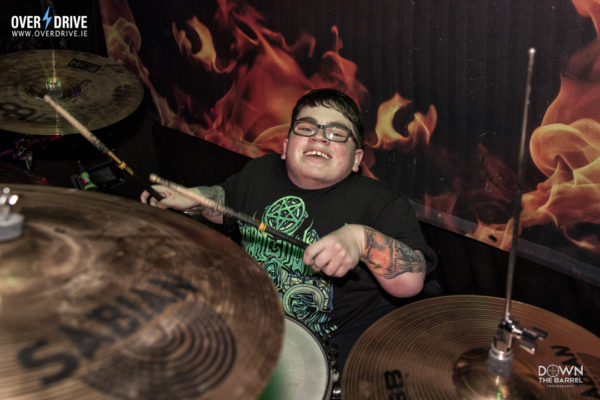 Taking us through the mid-point of the evening is Dublin stoner-rock group Screaming Giants, I’ll be honest – this band caught me off-guard. I was expecting an aggressive, metal-filled roar-athon. But instead, I got a groovy, funky QOTSA/Kyuss/Isis hybrid with tinges of Mellon Collie-era Smashing Pumpkins.

Heavy doses of grunge perforate their impossible-not-to-nod-your-head-to setlist of ‘Throb’, ‘Kill the Secret’ and a host of other rattlers that have left eyebrows on foreheads and admirations from a crowd that was caught cold. 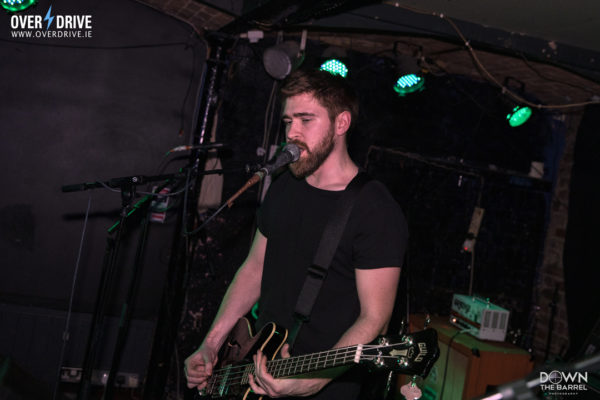 Original melodies coupled together with catchy and novel chord-work and riff progression echo from the speakers, and the Giants are in the driving seat. Frontman and bassist Hugh ‘Jazzer’ Loughman conducts his misfit orchestra as they bop in a groovy, grungey, mishmash of oddball licks, bass drum kicks, and rhythmic tricks that are reviving the interest and energy from the attendees here tonight, who can’t stop looking at the band.

Ryan Byrne and David Meking on guitars and vocals pair up and present the fused-together riffage in a cruise-control effort that sees them just sort of lie back and roll with the punches. Drummer Liam Kennedy (definitely NOT on vocals), catches them all together in his net and straightens the cacophony into well-laid, striated segments which have to be heard to be believed. This was the right hook which caught us all by surprise and the applause is very well deserved. 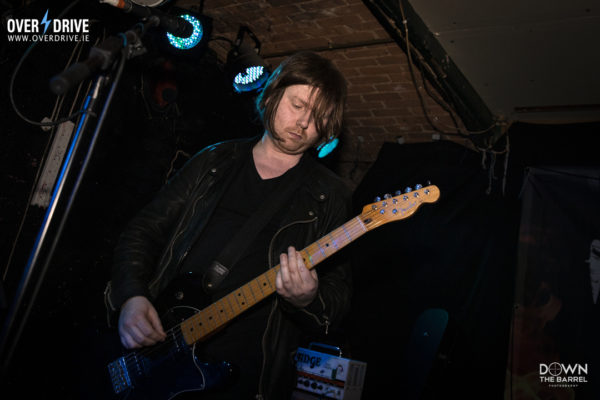 Fourth on the block is hard-rock six-piece Old Season who hit us hard with an undulating masterclass of old-school metal. Harkening back to trails of Dio, Iced Earth, Iron Maiden, and Blind Guardian, OS are showing us that the old ways are still every bit as poignant as the newer, angrier bands that are coming through the ranks.

Dazzling frontman John Bonham (no relation), has the lungs that soar high on the wings of many, many fantastic singers like the aforementioned legends, and the stage charisma matches his talent. Guitarists Jimmy Blanchfield and Jimmy Kiernan man the guns as the shred-masters simply rip their way through the crowd here tonight.

The song structure is, however, a little long. Due to the massive load-in that OS had tonight, combined with the length of their songs, they only get time to play 3 numbers. The contest rules are strictly enforced; you get x minutes to do your thing, so if you don’t use them wisely, it’s your funeral. 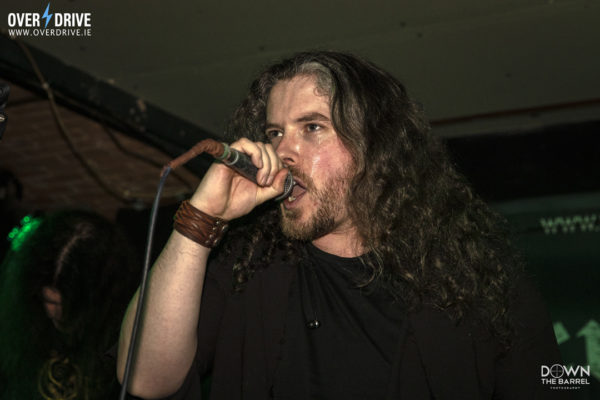 That said, this showcase was amazing. ‘Nevermore’ and ‘At The Hollow’ are among the tunes that completely blow the competition out of the water. Keyboardist Dermod Smyth is the guide of the fantasy journey into struggles of the mind and struggles of the self in a short, but jam-packed gig at Fibbers.

Dave Copely on bass and Anto Walsh on drums help to steer the pace in the direction of the judge’s table and Bonham lashes the waves of vocal energy out again and again. The sound is crisp and sharp thanks to the JC (the mastermind in-house sound engineer), so the gods have OS in their favour. When the opportunity comes calling for these guys, and it WILL come calling, they better be ready for the rocket ship to the top because that is exactly where they are headed. Hold on tight. 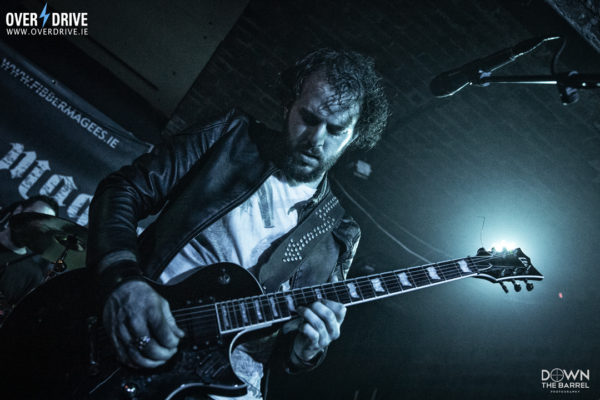 Scathed have another crack of the whip after narrowly missing out on a semi-final place to Immaculate Deception in 2018. Taking point is the deceptively powerful Ainsley Kavanagh, who rages on the mic with the intensity of any hard metal singer worth their calibre (I’m looking at you Lzzy Hale and Otep Shamaya).

Scathed saw what they were up against throughout the night and brought the kitchen sink to throw at this particular heat. Last year was too close for comfort, so Kavanagh is not taking any prisoners this time. She conducts the crowd masterfully, with Luke Menton and Ryan Doyle on guitars backing her up. Bassist Luke Butterly also swings the lead for his side of the stage, and drummer Ronan Murphy ties the bow together. 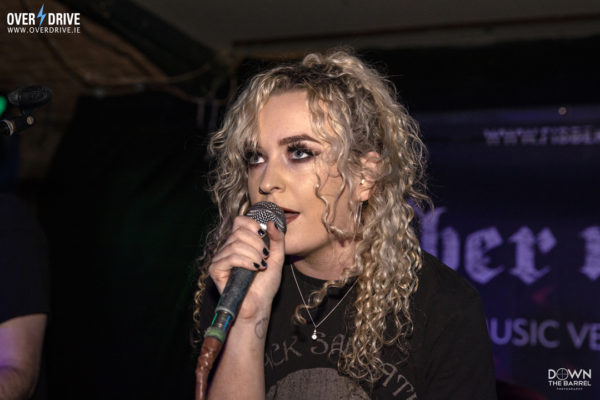 The riffs from Menton and Doyle are catchy and strong; ever-present in their opening number ‘Compromise Me’, and ‘Sacrament’. Powerful vocals from Kavanagh fuel the fire that is leading the crowd in a merry dance (or pit), and it is constructed by a powerful song structure which is perfectly entwined in Kavanagh’s delivery with the guitars, drums and bass all vying for pole position in the furore.

This is hard-hitting stuff from the Dublin quintet and they seriously have the nerve, the talent, and the moxy to make it in the music world. Their aggressive, no-nonsense attacking approach could leave dozens of bands in the dust, and more power to them for it. There aren’t very many female-fronted metal bands that I’ve seen packing this much wallop, so wallop on folks. The competition needs you.

Old Season gets the judges vote, and Scathed runs away with the crowd vote. The wildcard vote goes to Holocene Extinction, who will join the Virgin Converters, Grey Stag, and Trenchknife in the pot for online votes to see who plays again on the wildcard night.

Bloodstock Open Air will be taking place in the UK on August 8th through 11th. 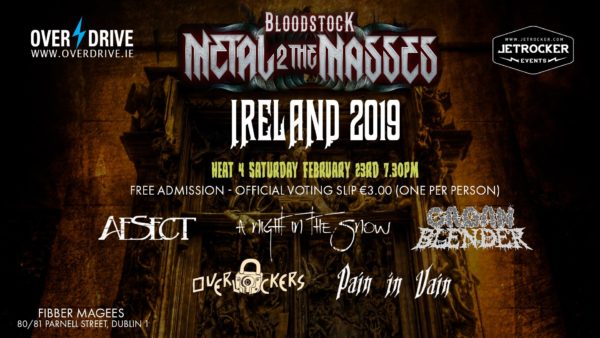 Photo Gallery courtesy of Down The Barrel Photography © 2019