As the heat stages of Metal 2 The Masses Ireland starts to draw to a close, the gap is getting narrower and narrower to reach the semifinals for the 2019 competition. 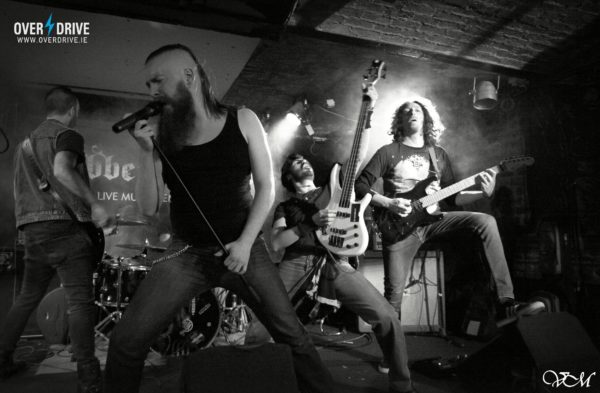 Almost 30 bands have played their hearts out on the stage at Fibber Magees, and some have left triumphant; others, sadly not so much.

The chance to play at the same festival as Scorpions, Sabaton, Cradle of Filth, Parkway Drive, and many more is tantalizingly close for one band in this contest, and this was one of the hardest nights to decide who should go through to the next round. 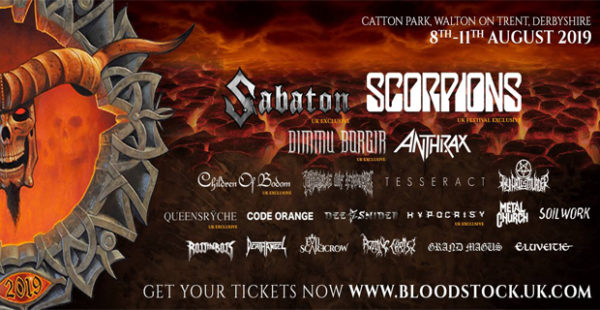 Returning for another shot at the title, Dublin heavy metal group Element X has a firm grasp of the dirty groove-packed stage show. With threads of Iron maiden, Judas Priest, and others ’80s and ’90s pure heavy metal titans, Element X are shaking Fibbers by the shoulders to wake us up on this dreary Saturday night.

Enigmatic talisman David Cullen has a persona moulded by observing the very best in the rock and metal frontman genre. There’s nothing too flashy about their setlist: it’s just the basics done right. 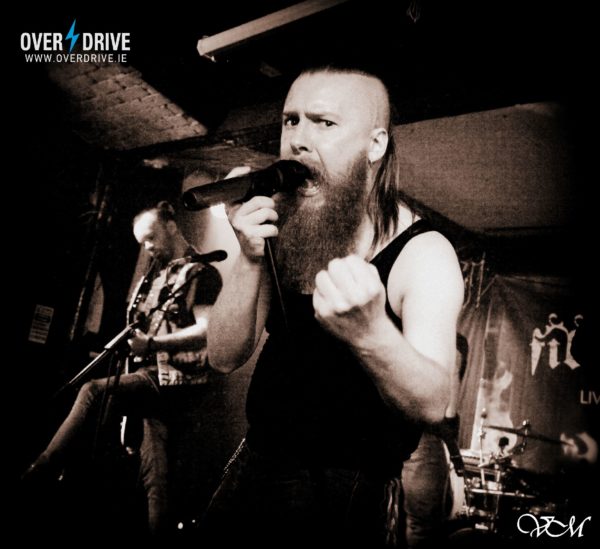 Drummer Rodrigo Alonso also plays a major, major part in keeping the entire rhythm section together, but the lead guitarist Franco Buonocore is at the sharp edge of Element X’s axe. Cullen embodies the frontman persona in its entirety – it’s an example set by somebody who’s in full charge of his role.

There is no messing about with Cullen’s performance and stage presence. The music behind him is like a large cement truck and he is the funnel into where the foundations are poured.

Like I said – the basics are done right with this band. The no-nonsense 2×4-timed drum sets and dirty-palm mute chunking guitars, (just like the greats of what we were all brought up on), really do set the tone and pace of the entire showcase.

Fist-pumping, headbanging and vocal-cord tearing heavy metal lines the pavement here in Fibbers. This is going to be some night! 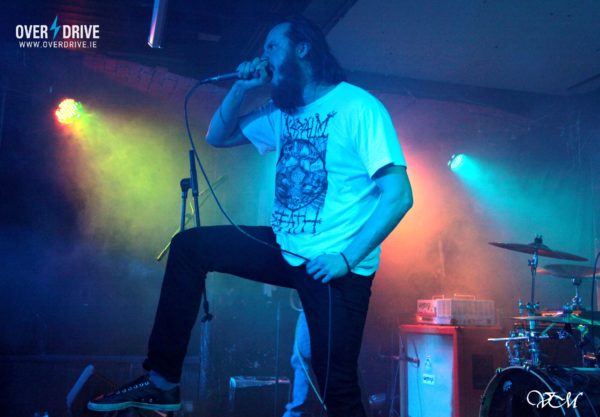 Dead Van Drivers are an Irish four-piece Floridian death-metal/DC hardcore fusion powerhouse. The music on offer is a blend of the entire alphabet of metal; each major genre is mixed into their sound which is, as always, mastered by the in-house sound wizard JC.

Singer Schultz has a gruff, gravelly voice that sounds like a gut-churning barrel of angry. Guitarist Mirek does a superb job of holding both rhythm and lead sections together, and bass player ZBH completes the setup with his superior playing style.

Their song “Mad Max” starts off in a seismic wave of heavy, but the song is dogged by a few tech issues. Unfortunately, that’s the game folks, shit happens sometimes. Decadent drummer Nit Martken hits a slow but unmercifully heavy roll session on the skins and sets the pace of tunes, but Schultz is purely unbelievable behind the mic. 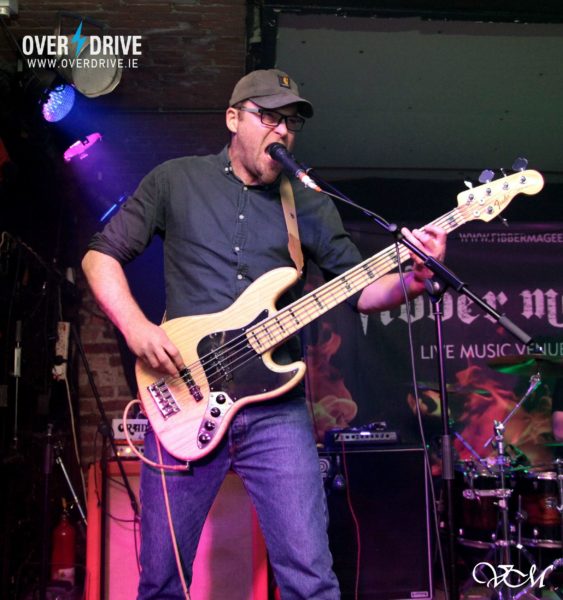 The quartet team up together as an amalgamation of brutally heavy music, and there is a serious void to be filled in Irish metal which these lads have found and have made their own.

Vendetta Love used to be a three-piece grunge rock outfit, but have added another guitarist to their ranks which is shown to be a very, very wise move indeed. Their sound is much more balanced, which allows guitarist and vocalist Shawn Mullen a lot more freedom to rip the lead guitar section a new orifice. 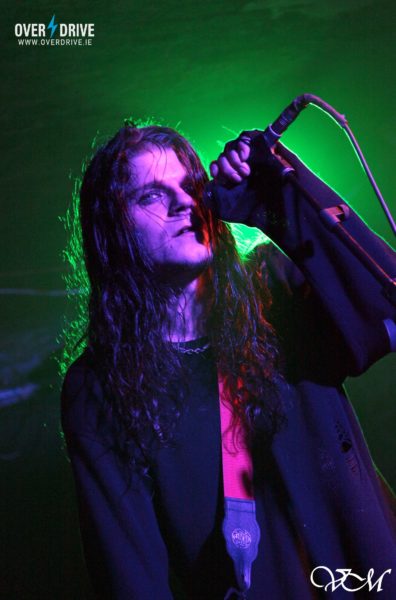 Drummer Darren Flynn catches the buzz of the funky riffs from Mullen and the new rhythm guitarist Chris Craig. Also, new to the fold is bass player Neil McEvoy, who seems to be having time of his life their third song “Father” is a mellow tune, not a balls-out, heavy metal fury as has been seen beforehand.

VL has limbs of Nirvana, Alice in Chains, Stone Temple Pilots amongst others in the grunge crusade brigade, and at times this is exactly what the doctor ordered. Mullen is almost Kurt Cobain incarnate, but again I go back to the monumental addition to the fold (this was such a good idea), to include Craig as another guitarist into their ranks.

The gritty grunge act culminates their talent in such a way that they really do take the crowd by storm. Mullen, however,  is sometimes a little bit hard to understand as he talks into the microphone, but the music does the majority of the talking for the band itself. As always when VL play, you are assured of an amazing show, and it’s always a pleasure to see them do what they love doing and do their thing on stage.

Archaós hail from the People’s Republic of Cork and bring their special blend of groove and chaos with them to Fibbers. Having been former contestants in 2018, they know what to do and how to do it onstage.

The guitar section manned by vocalist Luke Butler and Alessio Baggattin put foot to ass in an inspiring selection of riffs, and the breakdown sections supplied in tandem, with bassist Aaron Kennedy and drummer Chris Hanlon display some superior teamwork which deals more than their fair share of damage to the attention span of the audience. Everyone seems to be losing their minds to the performance. 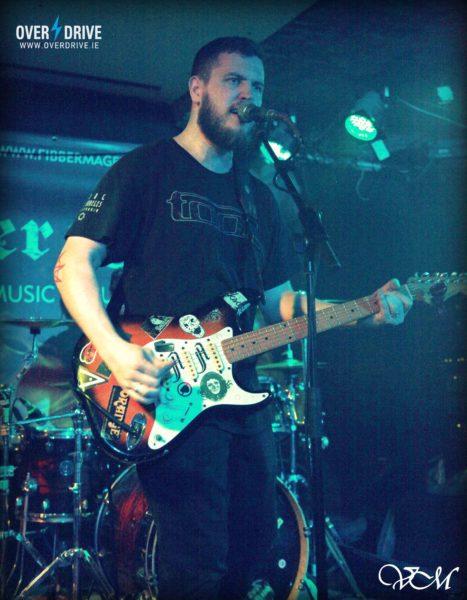 It has to be said that Butler’s clean vocals are somewhat flat and noticeably out of tune which is an unfortunate distraction but doesn’t seem to be an issue with their rabid audience that populates the front of the stage.

The music is brutally thick with shreds of Gojira, Tool and Deftones, and by the end of the gig the screams drown out the music. The most metal part of their setlist comes in the shape of guitarist Alessio taking over vocal duties and unleashes something, not unlike Dez  Farfara from Devildriver in the track; “Deliverance”. 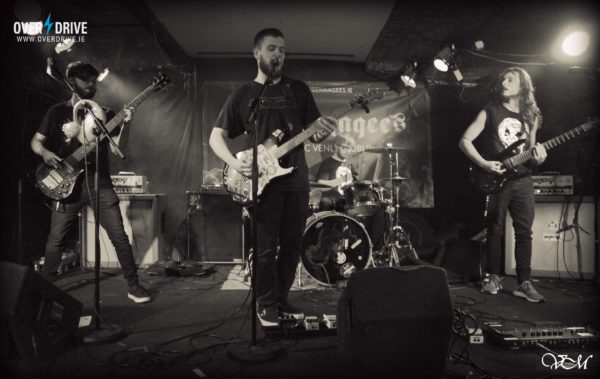 During “The Chosen One”, Kennedy jumps down off stage and meanders up to the judge’s table to give a quick “How are ye, lads!?;” and turns tail and legs it back up to the stage again. Superior confidence oozes from the band and the crowd can see this front and centre. The music is really catchy, the music was really gripping, and everyone is focused on what they are hearing and seem to really enjoy it. Top work from the guys from Cork, and no doubt big things lie in store for them

Immaculate Deception spears us with their anti-religious hardcore assault, as they take the final slot on the stage tonight. Guitarist and vocalist Declan (Caff) Caffrey wages a one-man war on the inhabitants of Fibber Magees, leading bassists Keith le Bash and drummer JP Isotope alongside him. 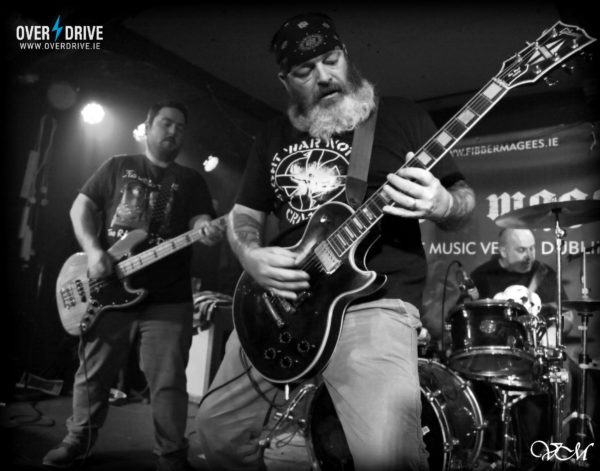 This is definitely a war that they’re capable of winning, as they are one of the heaviest and liveliest bands of the night. Not that the other bands weren’t also lively, but I’m talking about sheer pace and tightness. Caffrey has as a no-fucks-given (almost Lemmy-worthy), approach with music and it shows in his stage presence which is fearful and commanding.

In-charge and fearless, the experience in his role has the capacity to catapult the entire band not just on a steep incline, buta fucking vertical one.

As the night wears on and their setlist wears thin at the same pace, the inhabitants of the bar are getting more and more raucous, as heads start whirling, beer star flying, and bodies start to mount up. The aggression and energy that is extrapolated from the band into the crowd is really something to behold and you can’t really judge until you see them for yourself. 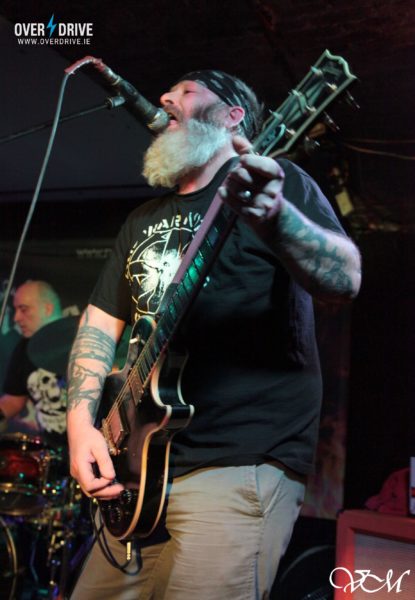 This is definitely a band that everyone has to see in order to appreciate the full extreme points of view that they have and these are such that will follow them for a long time to come.

Immaculate Deception is a seriously decent live band, and I urge you all to have a gander, lest you miss out on a true gem in underground metal.

Element X run away in clear front position with the crowd vote, as Dead Van Drivers takes the wildcard vote. Vendetta Love, by the slimmest of the slim margins (and this damn near caused a row at the judges’ desk), takes the judges vote.

With so many different flavours to choose from, it’s almost impossible to get everyone on the same page every night. We sit back and wait for the final heat, Heat 7, for the last 5 bands to take the stage. After that, the public will vote for 5 bands that they would like to see on the Wildcard night on April 13th. Heat 7 hits us on March 30th, so get down there and support Irish metal!

Bloodstock Metal 2 The Masses Heat 7 returns to Fibber Magees on Saturday, March 30th. Click the graphic below for the official event. 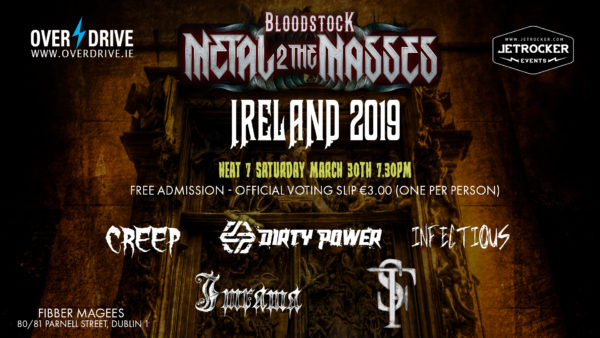