On paper, the last of the Bloodstock Ireland semifinals has the potential to cast shadows across the Irish metal landscape due to its mountainous lineup.  Tonight we are treated to five immensely talented and dramatically different bands. There are only two places left for the highly coveted “Grand Final” on May, 18th, so, it’s time to remove the gloves. 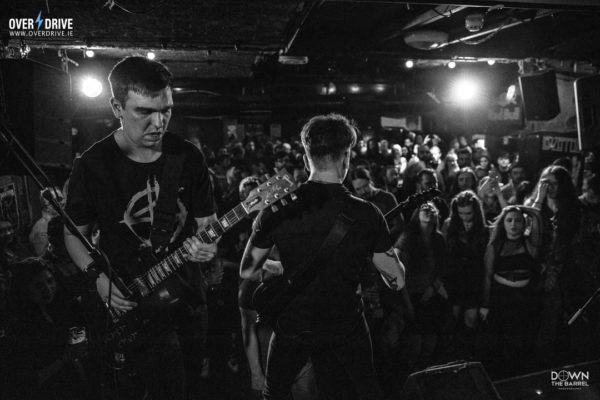 A steady stream of punters packs themselves into the confines of Fibber Magees on this Saturday Bank Holiday evening, with voting slips in hand, ready for what will be a Godzilla-size battle for the final two slots at this year’s Metal 2 The Masses Irish Grand Final.

Tonight’s line up is stacked from top to bottom with a varied selection of Irish metal that in fairness, all deserve to go all the way.

Opening up tonight’s festivities is none other than Dublin-based five-piece Antidotes. With the venue steadily becoming more thronged, the house lights flick to slime green, indicating the beginning of their set and without any warning, vocalist Dean Donnely rips off the bandaid and leads his bandmates into battle. 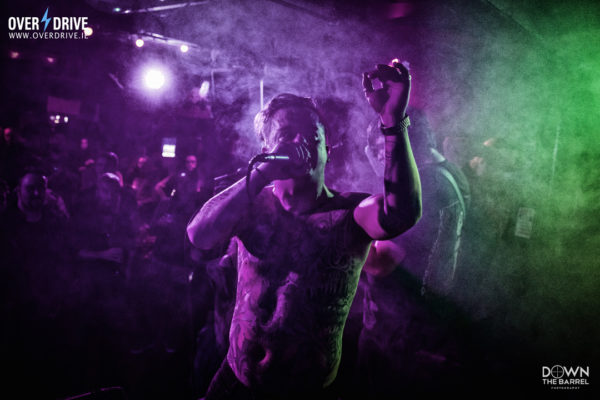 As a band that came back through this year’s ‘Wildcard‘ channel, Antidotes have evolved from a band that at first seemed a little rusty back in January to a well-0iled machine that are now fully comfortable with the new lineup changes.

Donnely is an engaging frontman (always has been) and tonight he’s not holding anything back. Stalking the stage with the look of murder in his eyes, his intensity is infectious to say the least as the venue hangs on his every command.

Guitarists Rob Gaffney and Cormac Tunstead hammer out a plethora of riffs like sonic roundhouse kicks to the face all the while bassist Leigh Walsh and sticksman Donal Bowens lay waste to the Fibber’s stage. 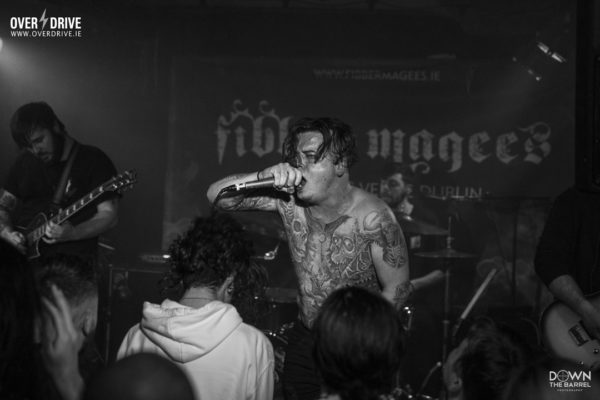 The crowd lap it up and with the bands latest single “Alone” ear-worming its way into the mindset of the judge’s panel, things are looking good for Antidotes. It’s never easy opening up a show, but tonight Antidotes show us just how they can not only grab the bull by the horns but go eye to eye with the beast and scream in its face.

Having reached last years final, Element X know only too well, just how important tonight’s show is and dig deep to deliver the goods. It’s obvious from the get-go that the band are fully charged and as they rip into their setlist. 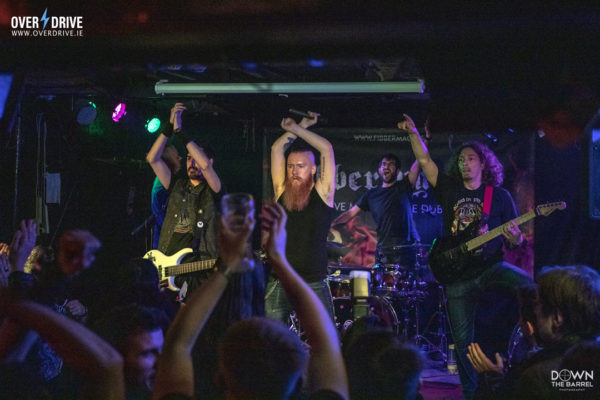 Element X bring buckets of riffs, drenched in old-school heavy metal vibes and tonight’s crowd are soaking up every morsel that drips from the stage. ‘The Angel or the Demon‘, ‘The End’, ‘Snake Eyes‘ and ‘Heart of Fire‘ are launched into orbit with a backdrop of dry ice and windmilling warriors holding ground at the lip of the stage. Element X pushed the bar a little higher tonight and with three more bands yet to take the stage in the hope of securing a place in the final, it’s gonna be a tough decision for the judges. Fact! 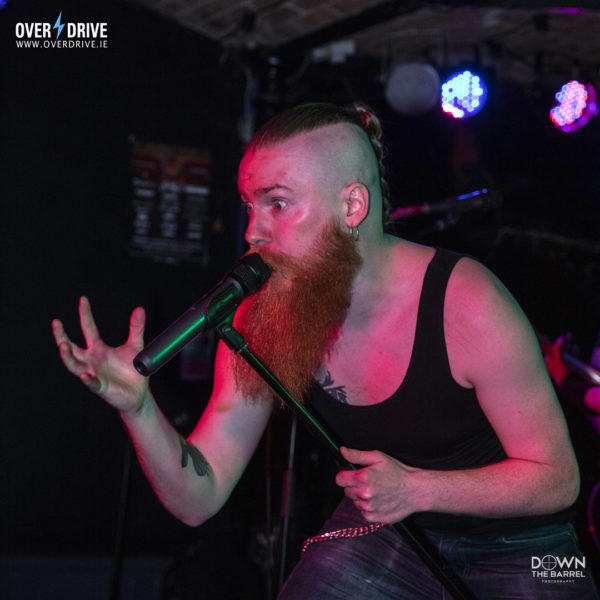 Organ Blender have taken every twist and turn in this year’s Metal 2 The Masses. The Galway natives first appeared with us back in Heat 4 in February and have returned as Wildcard favourites who then proceeded to tonight’s epic Semi-Final.

Their sound is a littered with chops and changes that weave through the likes of early death metal to tech to thrash in a heartbeat and it’s fucking glorious. By far, one of the most aurally captivating and interesting bands from this years campaign, Organ Blender mean business as they take to the stage. 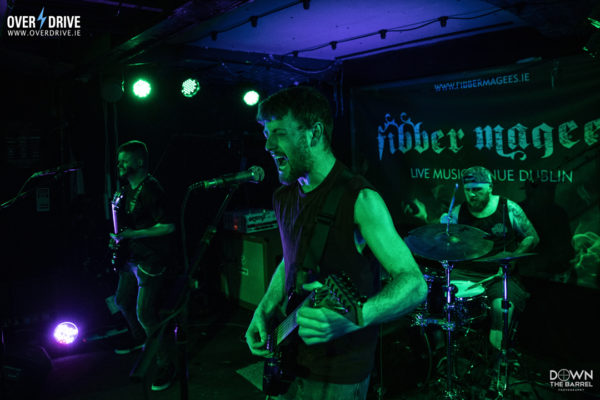 Stone-faced guitarist/vocalist Padraig Mckeown brings a palette of hefty arrangements into the ring with the likes of “Suction Chamber” and ‘Between The Blades‘ all the while man-beast drummer Jason Coniry beats the very living shite out of the kit like his life depended on it and bassist Jason Kealy lurches at the hectic front row with a menacing persona. This is where the hairs on the back of my neck stand to attention. Total fucking annihilation. 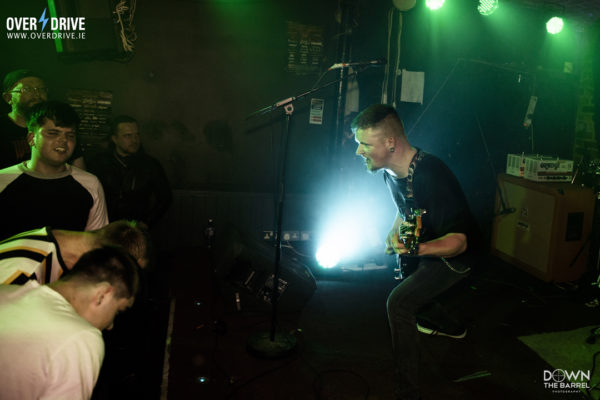 Organ Blender have their sights set on Bloodstock and there’s nothing gonna get in their way by the looks of things. Watch this space…

The venue is now bursting at the seams as Scathed takes to the stage. Lead vocalist, Ainsley Kavanagh brings the big guns tonight as she opens up her pipes with spectacular effect. As she articulates the band’s intensity through her captivating stage performance, the hurricane of Scathed’s sound whips around the venue, thanks to drummer Ronan Murphy, bassist Luke Butterly and guitarists Luke Menton and Ryan Doyle who dominate the stage with a huge presence. 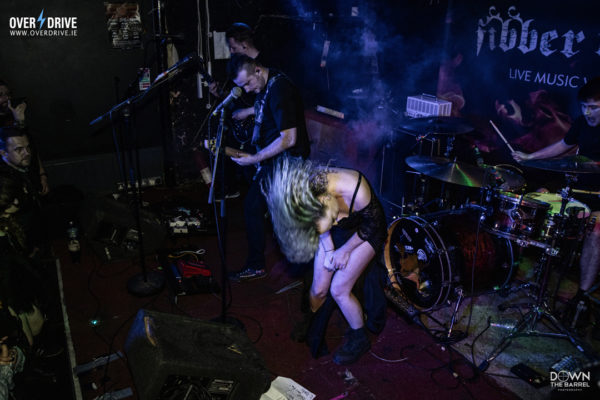 Having opened up for Halestorm last year for their Dublin show, Scathed are a band that has evolved tremendously over the last year, with their sound becoming darker and heavier thanks to the crushing breakdowns and guttural vocals. There is a real sense of change with the Scathed that we saw last year.

I sense that the bands sound is still new (to them) and in some ways, they are finding their feet, but one thing’s for sure, they have the potential to flip the genre on its head, as there is a lot of talent in the ranks that has yet to truly surface. An already smoking hot band that will no doubt burn brighter as they progress. 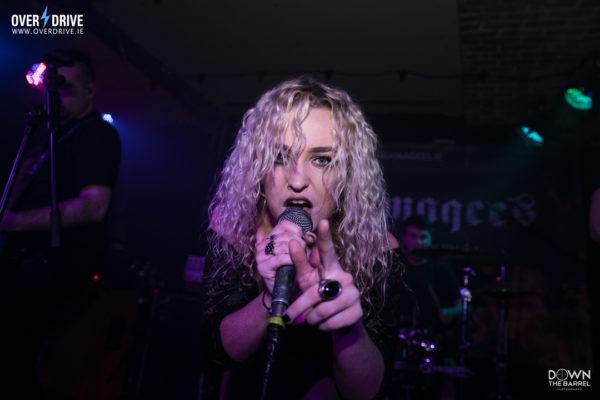 The final band of the night to take to the stage for a potential slot at this year’s Grand Final, is Irish melodic Death Metal outfit, Fornoth. Having formed in late 2017 one can not help but think; “Where have you been all my life?” Fornoth are just a compelling live band.

Loaded with a multitude of tricks up their sleeves, the five-piece just mowed down tonight’s audience with the slightest of ease. Almost from the get-go, they are a major force to be reckoned with and waste absolutely no time in getting the entire capacity in the palm of their hands. 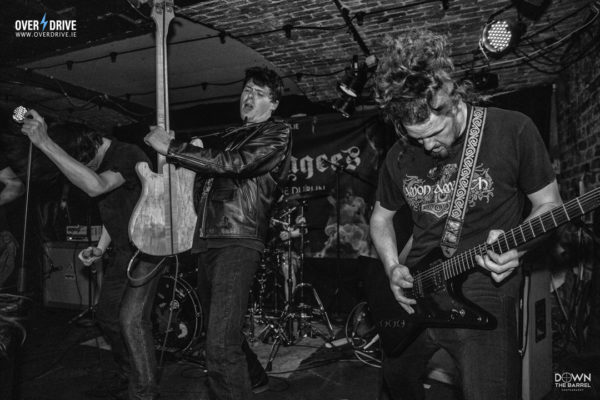 Catchy-as-fuck galloping riffs pound through Fibbers with the five-piece pushing the intensity with each nugget on their setlist. A serious Amon Amarth vibe infests Fornoths sound, but just when you think you have then all figured out, they hit the breaks and take a handbrake turn into the backroads that are buzzing with the hum of that dirty Rickenbacker Bass and wildly unpredictable arrangements. Without a doubt another incredibly exciting new addition to the already impressive Irish metal scene and a band that you simply must see live to get the true intensity of their mission statement. 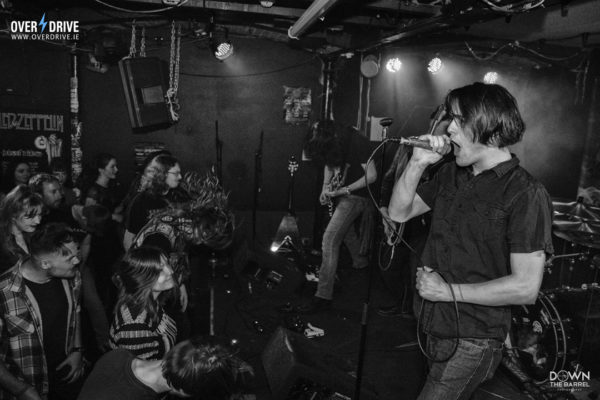 As the votes pour in and the judges deliberate the evening’s performances it’s time for Cork Hardcore quartet, Bailer to take to the stage and do some major damage.

The band are riding the crest of a pretty successful wave that has found them on the pages of Metal Hammer and Kerrang! as well as an impressive legacy of touring, which, most recently saw them on a country-wide jaunt with the mighty Conjurer, not to mention their scheduled booking for this years Knockanstockan Festival this coming July. 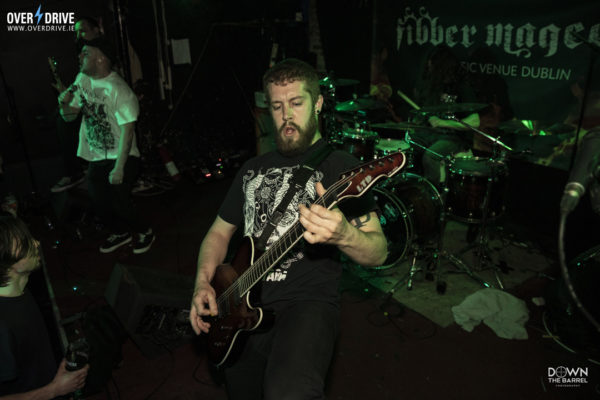 Bailer are one of those bands that can just flick the switch from the very first track and summon complete fucking chaos in it’s most brutal form, and tonight they don’t disappoint. 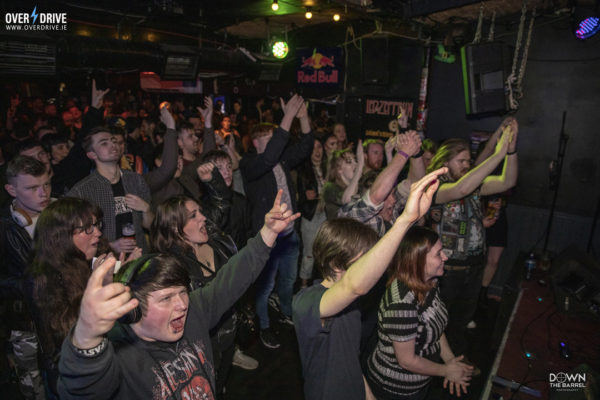 Once the venue gets their breath back, it’s time to announce the final two bands that will be joining AeSect, Black Shuck, Old Season and Creep for the Grand Final on Saturday, May 18th. As the packed house stands still in anticipation for the news, the cheers and applause welcome Organ Blender and Fornoth as the final two bands that have made the cut.

As far as Semi Final’s go, this was by far, one of the most intense and regardless of who made it through to the Grand Final, one thing is for sure, the underground heavy music scene in Ireland is in rude health and is getting bigger, better, stronger and it will only be a matter of time before it gets noticed on an international level. 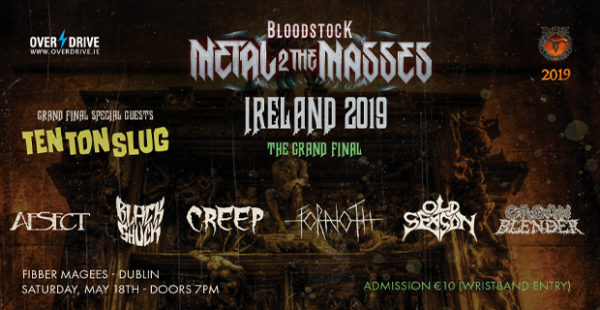 Photo gallery courtesy of Down The Barrel Photography ©2019.