The 2019 Bloodstock Metal 2 The Masses Irish Semi Final [B] showcase took over Dublin’s Fibber Magees last weekend and to say that it had all the gusto of a Grand Final is an understatement. 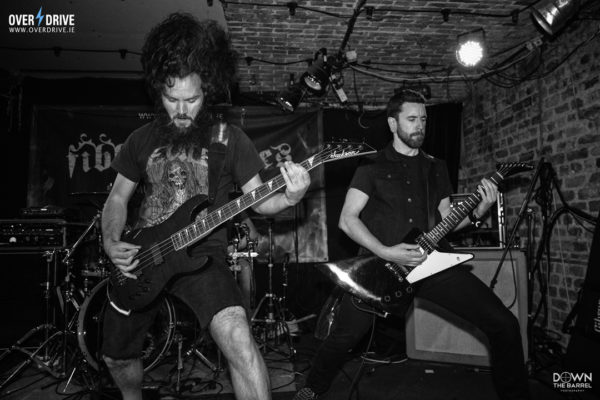 The second semifinal in the 2019 Metal 2 The Masses Ireland has snuck up on us, and the fuss hasn’t waned.

The hunger from each band is palpable, as 5 more Heat winners get ready to suit up and get fight dirty for one of four slots left on the Grand Finale bill on May 18th, where Simon Hall will choose the worthiest of those who came and fought to get their name in lights.

Let the second round commence!

Heat 7 judge’s winner Dirty Power starts the ball rolling on the semi-final B of Metal 2 The Masses 2019. 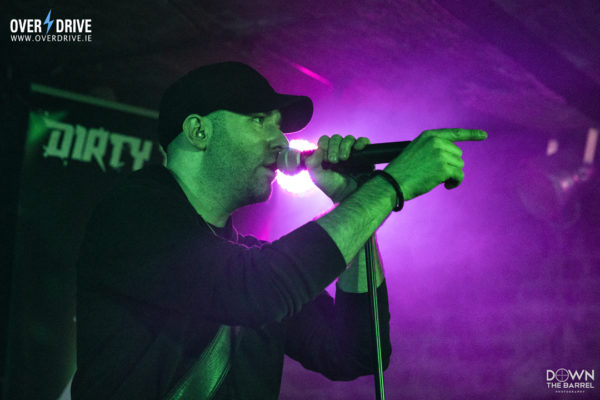 Lead into the set with a backing track that sounds like a recording from the television with an old cassette player, they shake the boards with an explosive set of alternative hard rock tinged with grunge and splashes of Rage Against The Machine. Frontman Brendan De Belder leaps into the guise of a chilled-out frontman who is more rock n’ roll than anybody else in the building.

Drummer Jerry Sadowski is positively on fire and is one of the key driving forces in the band’s earth-shattering sound. Bass player Marek Bero is also a force to be reckoned with, and when the three men start their groove, it sounds amazing. 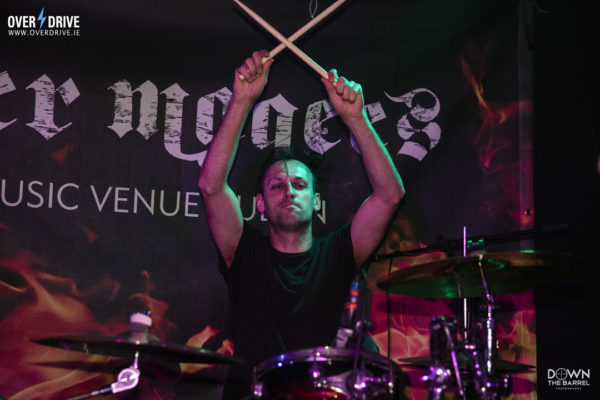 Not to shirk from controversy, De Belder dedicates the third song “Oh God’ to the ape in our minds, the part that everyone has and sometimes only let out once in a while. The beats keep coming and the grooves shake loose hard and fast; so hard, in fact, that song number four, ‘iDenial’, the snare drum tears and Sadowski has to scramble to get another one quicksmart. 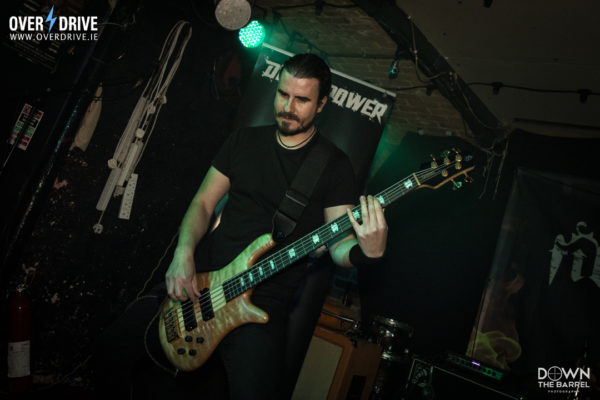 Bero and De Belder just hit the ‘unrehearsed’ button, and go into ‘slow-jam’ mode. It’s very impressive showmanship, and gives a solid adage that ‘the show must go on’. Even if you didn’t see it, you would never have known that it happened. It’s absolutely superfluous. In their final song ‘Back 2 One’, they kick a hole in the roof, and the slow sleepy heads for this Saturday night’s opening slot attendance are now well and truly awake.

Hard rock and groove metal demons Black Tree progressed to the semi-finals via the crowd vote in Heat 1, all the way back in January. The five-piece go immediately for the throat in a flurry of pinch harmonic wails and dive bombs, courtesy of grizzled guitarist Domo Mac Gabhann.

Vocalist Dave Walsh has done a fine job of leading the horde through the flames to M2TM semi-final B, and tonight is no exception. Imposingly effective in the frontman persona, has no questions about telling it like it is, especially with their ‘fall-on-your-sword’ song, “Belly Full of Blades”. 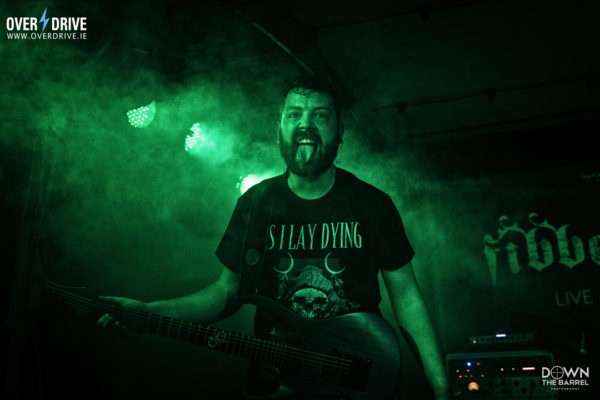 Each and every man gives it socks with their partners in crime compelling them to move faster and play harder. The beats are dropping gloriously from their setlist and none more so than in their middle finger to the crown entitled ‘Coiled’. The final song, however, is their masterpiece.

The final blow-out of that tune is top-class, giving a heavy riff background with a fine solo outro, and also giving a superior vocal overlay. This is top work from the sludgy and groovy heavy hitters, and the votes are already starting to roll into their deck – the heat is on. 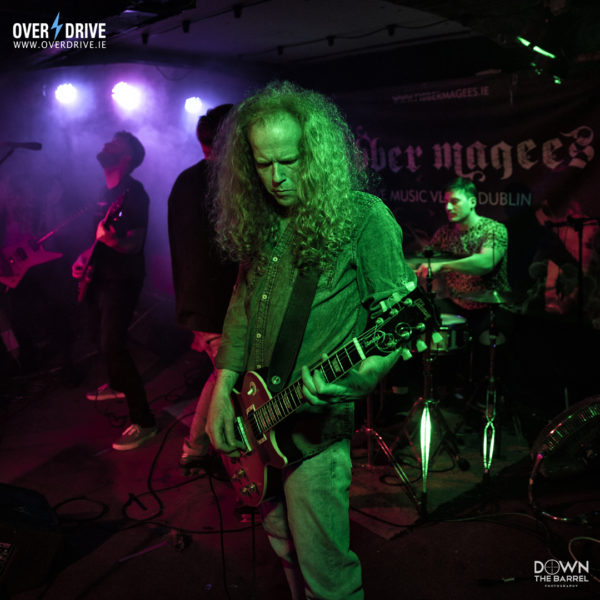 Heat 4 crowd choice’s AeSect bring the sledgehammer setlist to Fibbers and don’t take any prisoners. Venomous frontman Tony Carbery has the venue filled at the halfway point tonight, and the belly-fire vocals pierce the eardrums of anybody in a 10-mile radius.

Thick, chunky death metal riffs supplied by Dave Kennedy and Aidan O’Halloran pour the petrol on the fire currently out of control creating a maelstrom of damage-inducing fury. Bass player Aidan Williams windmills in attempts at flight, and behemoth drummer Luke Peters holds the line together with nothing short of solid professional perfection.

This is prevalent in their opening jawbreaker ‘Architect of Misery’. Madman Carberry is literally swinging from the rafters to demonstrate that he really doesn’t like the Catholic Church one bit. Small rants about Notre Dame and the ability to repair it so quickly, as so many others go hungry and homeless all over the world are stirring the melting pot for hypocrisy that is so rife in the modern world. 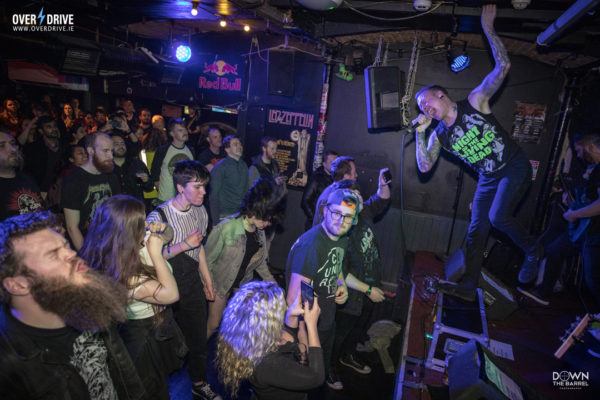 This musical lament takes place right before ‘Blind Faith’. Since he has entered the band after the departure of two former vocalist’s back in June 2018, some songs have been slightly tweaked, as in, lyrics and song titles have been ever-so-slightly altered, much to the benefit of the band, and the results are truly amazing.

The depth and gravity-defying heaviness of this band is a result of years of blood, sweat, tears and elbow grease. AeSect have always had a bright future and this will get them far because they truly deserve it. 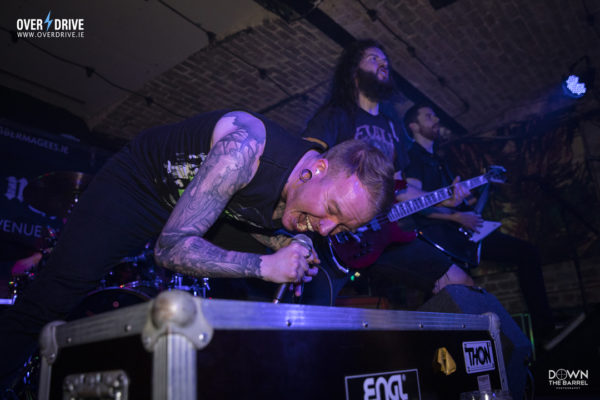 Sectile were the judge’s decision at Heat 2. The prog metal 5 piece are battle-hardened finalists from 2018, and also entrants in the 2017 round of M2TM.

Infinitely nuclear-voiced frontman Gabriel Gaba is still bringing his A-game to the stage and has no signs of slowing or showing a hint of strain. Lead guitarist Mark O’Reilly is also hot on his heels in this right, and behind him is a rest of the troops: bass player Cormac Hannigan, drummer Zachary Newman, and rhythm guitarist Michael Sheridan. 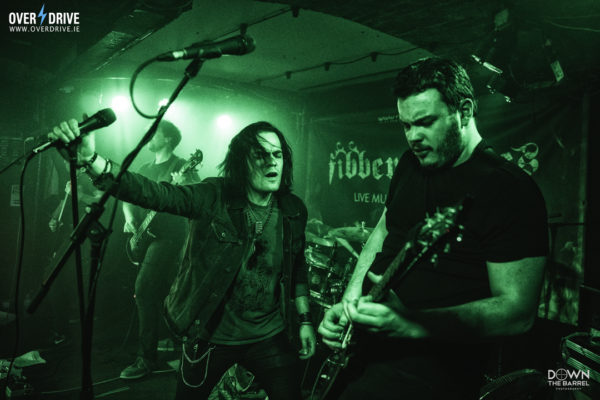 Newman has always wowed with his intricate and off-time drum style: it really must be a gargantuan work trying to keep that shit together. Sectile’s song structure is an amalgamation of seriously hard-working musical talent, led by Gaba’ is inimitable style and flair. Sectile once again are pushing the boundaries of the showcase of the 2019 M2TM post-Heat stages and draw quite the fanbase to see them succeed.

Unfortunately, Sheridan, after this show, announced his departure from Sectile. We wish him well and all the best in his future endeavours, and let it be known right now that Overdrive and everybody associated with M2TM as always held him in high regard. It will be hard to find someone who has the same effect musically, but we know that this probably isn’t the last that we see of him. 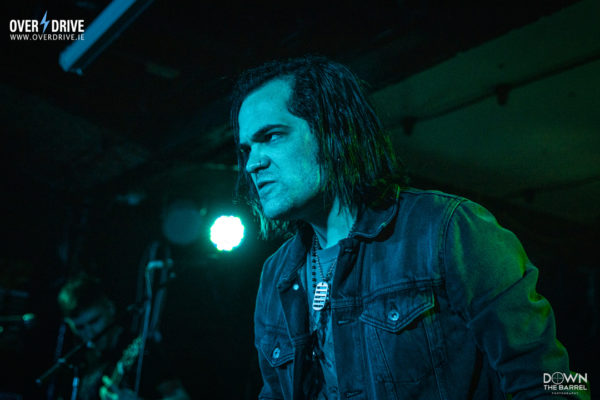 Galway three-piece metal upstarts Black Shuck got through Heat 5 with the judges vote. Black Shuck are all over this gig, with catchy and punchy riffs coming from vocalist and guitarist Brendan Murphy. Bass player Thomas Doherty is every bit as animated and as maniacal as Murphy is, but madcap drummer Ian Doherty absolutely shines.

The breakdown on songs like “Asylum” and “Craving” are just truly batshit crazy. Murphy repeatedly leaps from the stage to join the audience in the headbanging and general mayhem caused by the tunes that are being belted out from the stage. 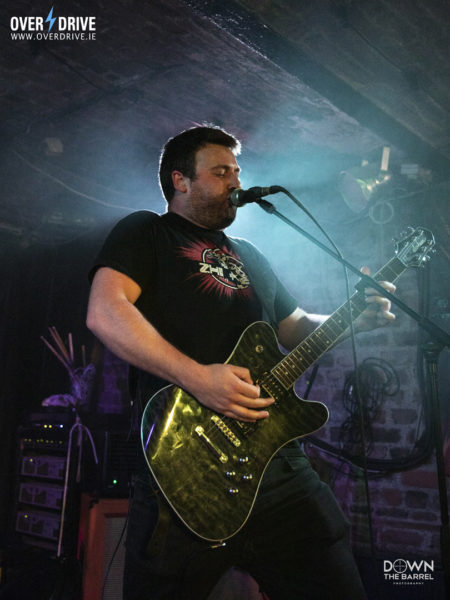 He really does know how to get the crowd going and his antics on the dance floor are a prime example of that. He also still manages to keep time, maintain his madman frontman poise, and encourage the crowd to participate in the night’s violence. Their final song ‘Resurrection’ hold the hammer blow to Fibber’s already-fractured skull. The guitar-driven wizardry, bass predation, and drumming beatdowns leave Fibbers a gibbering wreck after another phenomenal night of underground metal in Ireland

Snowblind were picked from the 2015 Grand Final by Simon Hall himself, to play on the Jagermeister stage at Bloodstock. I caught their set at the festival and it was absolutely savage, as one of the hardest working and original bands in metal in Ireland.

They are back to entertain the audience while the judges try not to fall out with each other over who to pick to go to the final on May 18th. The trio still have the musical tech that took them from the Heat stages in 2015 and put them on this path, and on the hallowed grounds of Catton Hall at the Bloodstock Open Air festival. 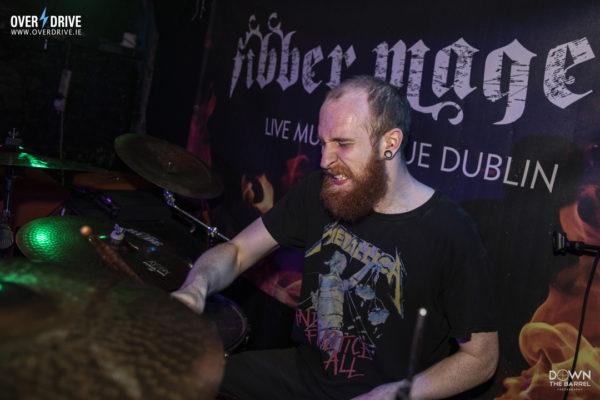 The audience is still going strong here at 12:30 a.m. and Snowblind is putting in through their paces well and truly. In the audience, I see members of other bands that have played here and there supporting the immense band and their music. Singer and bassist Ian McKeon leads the charge accompanied by guitarist Sean Boland and drummer Jack McCarthy.

Technicality of the name of the game here, as McKeon and Boland takeover vocal duties interdependently. Their timing also supports the seriously novel and heavy tunes on the stage. They hit highs, lows, instrumental, and death growl songs, and always managed to keep everybody involved. All three men get their chance to shine by each taking their turn to blitz their instrument section. 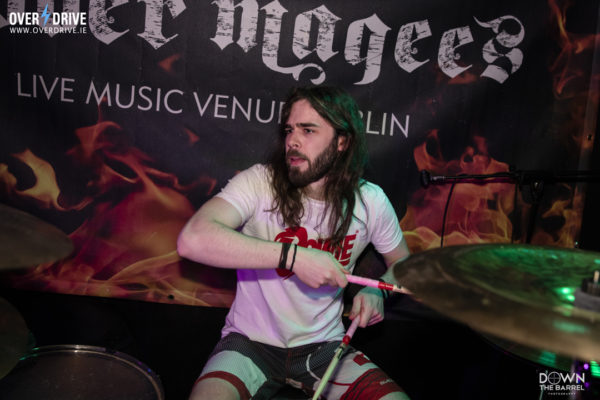 This is testament one of the first bands that Overdrive sent to BOA, and their work ethic is still as prevalent and vivid as it was back then, so here is to many more in the years to come Snowblind’s outrageously experimental metal setlist has daggers of hooking riffs to punch a hole on the floor, and this is EXACTLY why they were chosen to play at the festival. They are an example of true originality and dedication; a beacon that other bands in Ireland aspire to, and should be revered as such. 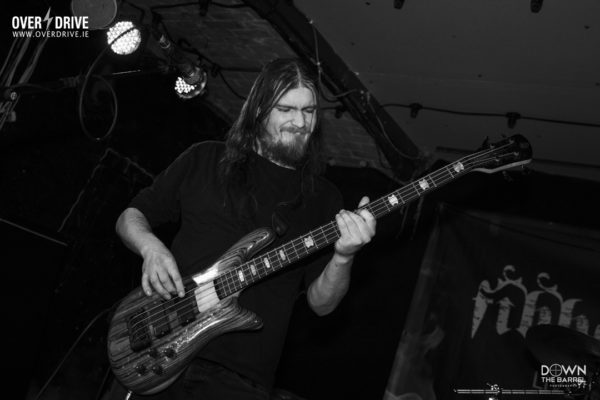 And so, on to the evening’s votes. AeSect once again dazzle the punters enough to get the crowd vote, but the hard part is deciding which of the other four bands get to go to the grand final – that decision narrowly goes to Black Shuck.

The last semifinal is Saturday, May 4th, where the final 2 slots will be up for grabs. This promises to be a bludgeoning night because, after this, it will be out of all our hands: it will be decided by the metal gods themselves who will proceed to BOA.

Rounding off the night will be rising hardcore brutes BAILER who have plans on blowing the roof of Fibbers, so make sure you don’t miss out.

Admission is €5 (includes official voting slip) and will give you access to six (count ’em SIX!!!) top quality Irish Metal bands. Please make sure you come down and support your local scene and give you vote.  Click here for more info on the next event. 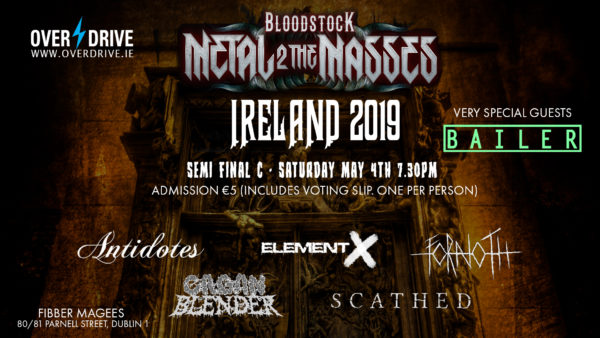