The eagerly awaited return of one of the best bands to come out of Sweden in recent years, Blues Pills takes place in Dublin on a night where winter is definitely starting to kick in. It’s crisp and clear, but there’s definitely enough excitement around for this show tonight. Last year’s performance by Blues Pills in the same venue certainly left its mark on Irish gig goers and the tales of that night should certainly be enough to swell the crowd for this second visit. 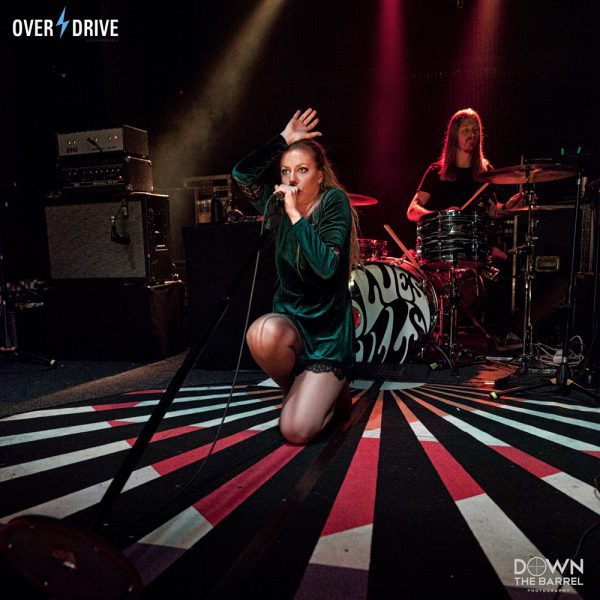 Opening the show tonight are Slovenia’s blues-rock upstarts Stray Train. Having released a very strong album this past June, entitled Just ‘Cause You Got The Monkey Off Your Back Doesn’t Mean The Circus Has Left Town, the five-piece unleash their brand of rocking, bluesy and at times funky rock showing their talent for carrying a tune or two. Tracks like the new single “Green Card Paradise”  start with a guitar intro that really reminds me of “S Before X” by Pat McManus Band, but it’s a really nice punchy rock song, with a blues base, as a blues-rock band these guys sound pretty heavy at times, no bad thing at all, helps separate them from a lot of what’s out there at the moment, and “Plastic Princess” is another of the highlights, along with “Wander Man”. Towards the end of the set I take a glance behind me and wow, for the first band on a 3 band bill, there’s a big crowd out there, which is fantastic to see.

Stray Train’s ability to incorporate massive slabs of infectious funk works in tandem with the vocals which add a different groove to the sound making their music a bit addictive. They are also quite interesting to watch, none of these guys really want to hide in the shadows of the stage and their crystal clear backing vocals, definitely, make up for the lack of keyboards in their live setup. 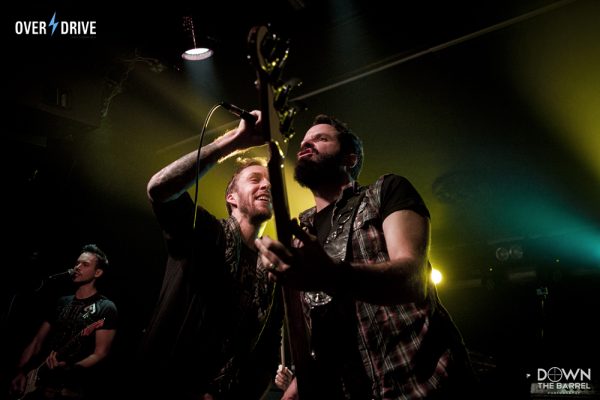 A nice cover of Rival Sons “Pressure And Time” is thrown into the mix to which they really manage to put their own twist on it making the rendition not just a note for note cover. Stray Train are a very good blues – rock band with some added elements of 70’s classic rock and a funky vibe thrown in for good measure. Tonight I witnessed some excellent guitar playing from both Jure and Boban (one of the founders of Slovenia’s Metal Days Festival) who seemed to swap between lead and rhythm guitar when each particular song called for it, allowing both to showcase what they could do. A thoroughly enjoyable set from a band to keep in the memory banks, one album in, experienced musicians and a great sound show’s there’s more good stuff to come from these guys. I really hope we manage to get them back on Irish shores again soon, damn fine set. 4/5

Next up a band that many in attendance have been very eager to see on an Irish stage. Germany’s Kadavar, who’s particular brand of doomy, groovy ’70’s infused rock fits in pretty well with this evening’s lineup. It was very noticeable that the area at the front of the stage was now a lot busier, the already quite large crowd had swelled. As the bearded trio enter the stage, they strike a really imposing visual image and waste no time in getting this party up and running.

“Come Back Life” provides the uninitiated with enough information to know this band is heavy, powerful and has one of the most amazing grooves you are ever likely to hear. With the bass and drums hitting you square in the chest, there was a worry that the sound would be too muddy but tonight all seemed perfect. Kadavar ripped the roof off the Voodoo Lounge tonight displaying a tremendous level of controlled frenzy at times mixed with their unique lyrical presence and it sounded awesome. 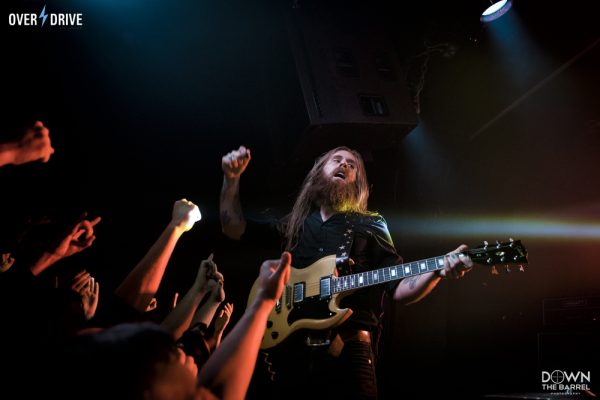 This was an absolutely Epic set, such power, every note is made to count and it’s hard to keep focused on any single band member, they are each that good, but seriously it’s really hard to take your eyes off Christoph “Tiger” Bartelt he’s just a human dynamo, terrific drummer with brilliant stage presence, and that’s not to take anything away from Christoph Lindemann (guitar/vocals) or Simon Bouteloup (bass) who are both excellent, but when the bulging eyeballs are staring at you from behind the kit you are forced to stare back. A lot of the songs from the most recent album, Berlin, seem to take on a very new life in the live arena, it’s not just that they are heavier, but they seem to incorporate a slightly darker more evil alter ego as they feed off each other, almost to the point they are daring each other to go one step further. 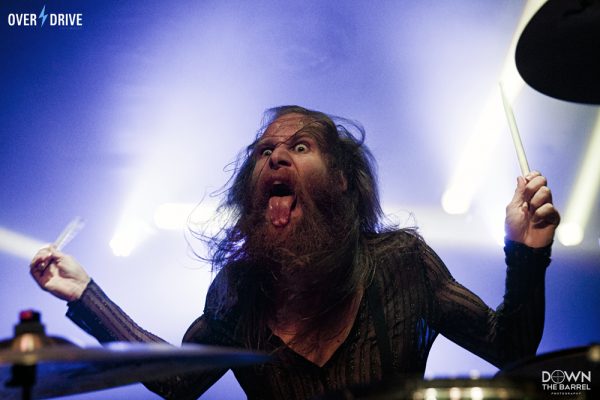 Highlights come one after the other, with the wonderful “The Old Man” and “Thousand Miles Away From Home” still registering high in the memory cells along with a really pummelling version of “Pale Blue Eyes”, just when you think they are going to take their foot off the pedal they push it to the floor again, this is turning into a special night.

Having been around a while and witnessed many bands cover ‘Helter Skelter’ (The Beatles)  but quite honestly none of them have come anywhere close to the way Kadavar attacked their version of the song, absolutely savage, this is a much more powerful song as they play it than the original, brilliant stuff and what a way to finish their set, not listed on their setlist a so guessing they were enjoying themselves as much as the crowd, one of those sets you wished could go on longer, but at the same time you are delighted to say you were there to witness it, I’ll say it again, this was an epic performance by a band clearly on top of their game and playing like they were doing a festival to thousands of fans, one of the performances of the year without a doubt. 5/5 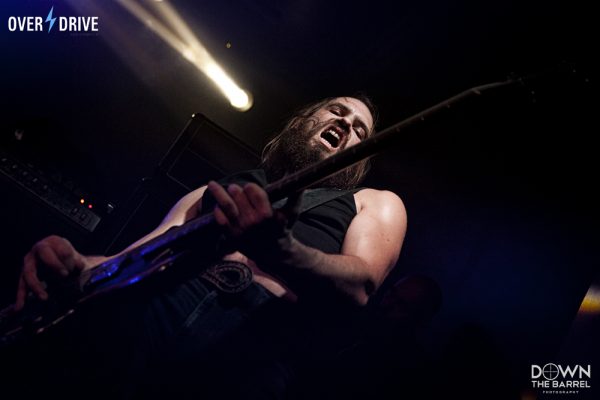 Sweden’s Blues Pills are just an outstanding band. Led by the terrific talent that is Elin Larsson, whose stunning voice and excellent stage presence is reaching every corner of the packed out Voodoo Lounge tonight. Armed with a hat full of top notch songs that seem to be getting bigger and better every time we hear them live, it’s the outstanding power of Elin’s voice that carries the Blues Pills formula through a multi-genre maze of classic retro sounding rock to high energy soulful elements of irresistible Motown. 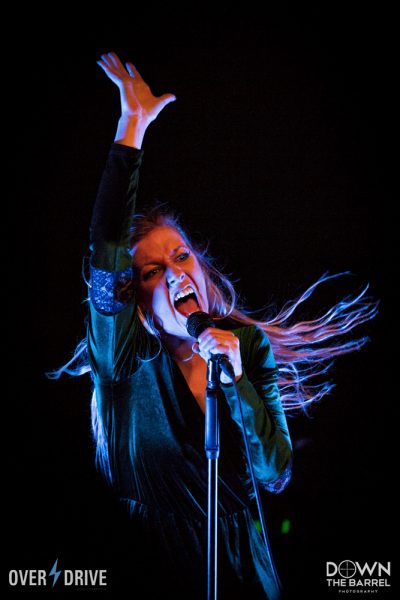 Tonight’s set is made up of songs from the recent Lady In Gold album and the highly acclaimed self-titled debut from 2014. It’s quite odd, but even when you see them for the first time, Blues Pills makes you feel like they’ve been a part of your life for many years. Elin’s spellbinding performance instantly draws in tonights audience while, Dorian (guitar) and Zack (bass), who are both excellent musicians, holds a formidable and steady anchor for the very beating heart of the band.

By the time the band, now a 5 piece with the addition of a keyboard/second guitar player, hit the stage the place is packed creating an  atmosphere that most bands would crave for. Since their debut show in Ireland back in April last year, word has obviously spread of their outstanding live ability, as it’s near impossible to manoeuvre from the bar to the stage with ease during the first few songs of their set. 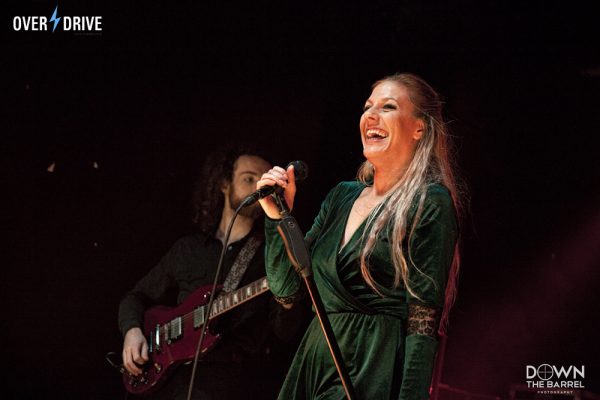 There’s a very visual element to Blues Pills with the almost constant movement of Elin and something similar behind the drum kit from André, who really drives that little bit of aggression in the music which gets the heads get moving all around the venue. When you have a figurehead like Elin, you just have to let her do what she does and that’s how it is here tonight. She’s dancing, doing aerobics, interacting with the crowd as much as she can, all the while using the amazing instrument that is her voice; to wow the crowd.

From firm favourites like ‘High Class Woman’ and ‘Devil Man’ which are thankfully still in the setlist, there’s not a weak song in their set. The new material slots in so well alongside the bands, modern classic hits.  Just like the other bands on the bill tonight, a large part of their success is their ability to draw elements from rock, blues and sou which Blues Pills have in abundance, with a bit of a psychedelic leanings added for good value. 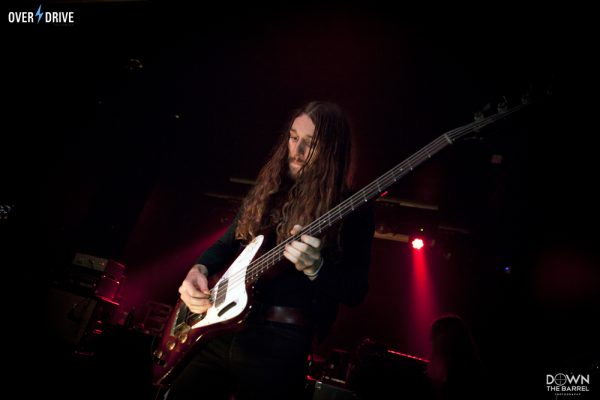 As we sadly approach the end of the bands performance, a polite encore see’s Elin returning on her own to take a seat at the keyboards. Although most people know what is coming, nobody could be prepared for this truly stunning, slightly haunting and beautiful rendition of ‘I Felt A Change’ from this years excellent Lady In Gold album. Spine tingling vocals, so pure they almost reach into your chest and touch your heart strings. Another moment created by this band in the Voodoo Lounge that I won’t forget. 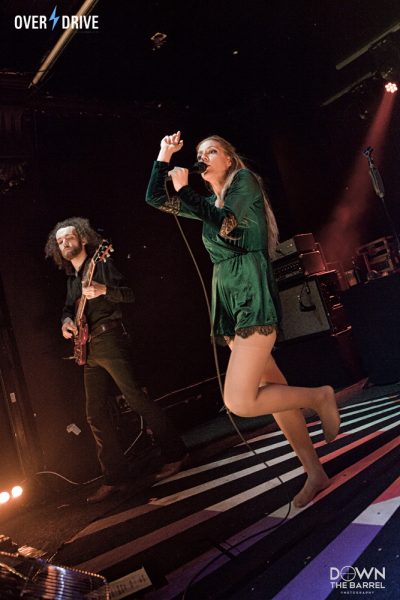 On a night where the music from all bands has been very much top notch, nobody wants the Blues Pills set to end. Most definitely a band on the rise and continuing to play with the enthusiasm they displayed the first time I saw them a couple of years ago supporting Rival Sons in the UK. Next time we get to see this band they may have elevated to a larger venue, but two shows in two years that have had something magical about them is more than I could have wished for. Perhaps we’ll be lucky enough to get another show with them in the same venue, who knows. So many songs in the set highlight different elements of the band ability to cross-pollinate genres. As they effortlessly dip into various styles throughout the night, it’s apparent that they are truly unique and stand alone as one of the most intriguing bands in the rock world right now.  Final tracks “Rejection” and “Gone So Long” close things out in very different directions, and perhaps “Gone So Long” with it’s languid style would have been better second to last, but no matter, it’s a great song, and showcasing Lady In Gold for all its diverse beauty. I personally can’t wait to see the band again and look forward to more new music coming soon. If you haven’t seen Blues Pills live yet, do yourself a favour and don’t miss their next visit. Fantastic! 5/5 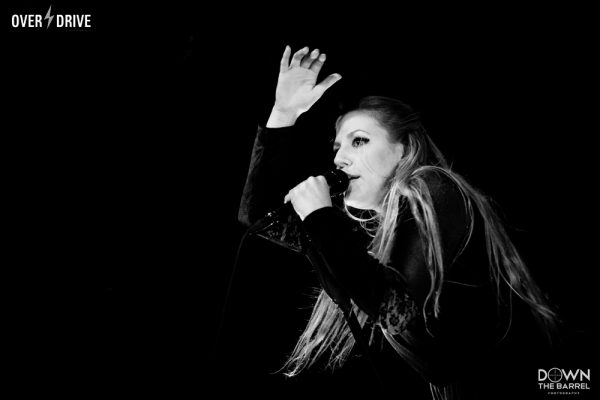 I Felt A Change

Check out the full gallery from the show below. All images courtesy of Down The Barrel Photography © 2016