CRADLE OF FILTH rolled out a stunning online live stream last week. So, naturally, Overdrive stocked up on some delicious red wine, kicked back, and immersed ourselves in the wonderful world of Dani Filth and friends… 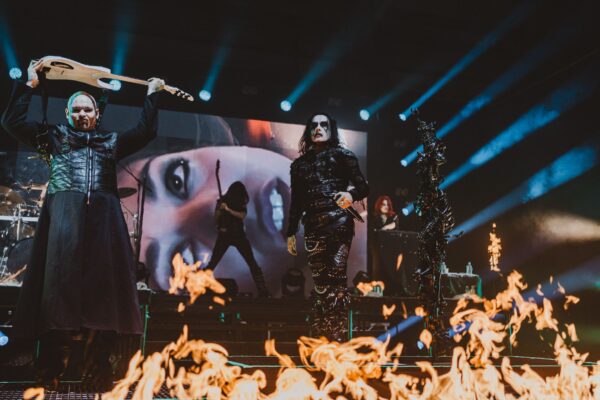 Who knew this was going to come – ‘the Year of the Plague’ as Cradle of Filth jokingly referred to another year, culling all possibilities of live shows.

By the end of 2019, the band had wrapped up a massive world tour stretching from North America, to Europe, to down under.

Snug in between the madness of these shows fit an exclusive show for Halloween 2019 in London’s Palladium to coincide with the re-release of 1998’s iconic album Cruelty and the Beast, and then one final show in Belgium – and that was it.

Perhaps fortunate for the band – as 2020 was the year they were due to go into the studio to record the yet-to-be-released ‘Existence is Futile. 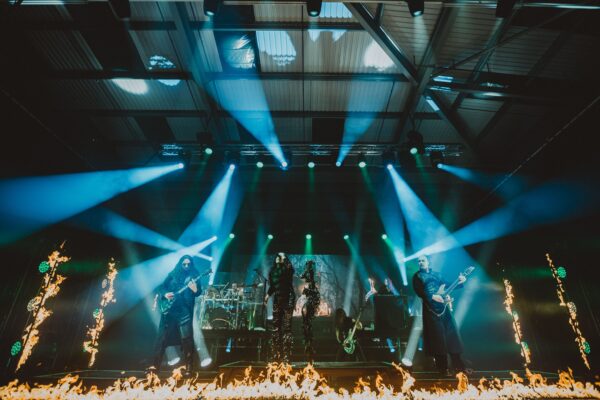 Touching back on a previous interview with Mr. Filth himself, it did cause some difficulties when it came to summoning their overseas members to the studio due to British lockdown restrictions and the policies on overseas travel. It’s certainly an uphill battle with a lot of head-scratching and shrugging, but the industry can still stay slightly afloat with the option of online live performances – there is a huge void, but it still keeps the ball rolling.

Back in August 2020, the band announced a live stream concert from England’s St Mary’s Church – which frustratingly also ran into a lockdown-shaped wall and forced the band to reschedule from Halloween 2020 to May 2021.

During this period of time, long-time keyboardist Lindsay Schoolcraft announced her departure from the band, so tonight’s return gives the perfect opportunity to announce the new member.

It is an extremely odd feeling to report about an online show. There is no sense of crowd interaction, no feeling a sense of energetic hype radiating from fellow gig-goers, no venue smells and temperatures, no feeling that fun vibration through the floor, nor even the ritual of having a scan over the merchandise desk.

During this time frame of a ban on shows and gatherings (at least, by Irish standards), many bands are feeling the brunt of not having funding coming from gig merchandise sales. For this show, Cradle of Filth have created merchandise bundle sales where a selection of different t-shirts can be purchased alongside virtual show passes – even offering a VIP pass in the form of a group video chat with the band. Not only that, each purchased ticket offers the opportunity to win a COF guitar worth $2000. Nice.

The first 40 minutes of the online stream offers a looping display of Cradle of Filth merchandise up for grabs played alongside some short Cradle music snippets and stock music. Of course, this long wait also offers pre-show anticipation and restlessness – a smart replacement for real-life stage load-off/on and sound check. 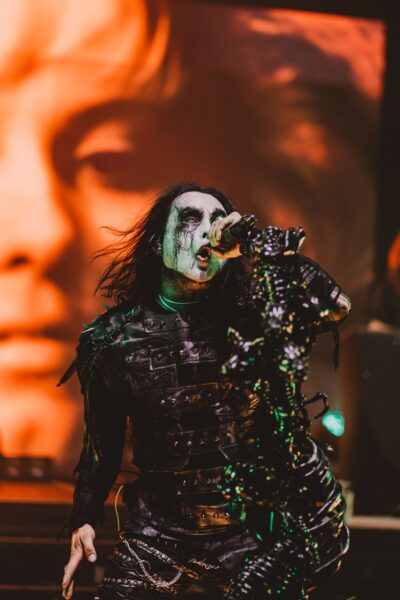 Five minutes prior to the show (or in this case, a clock reading five minutes to midnight), a countdown with the bands’ logo and two candles is displayed, offering some extra anticipation and pre-gig excitement.

The bell strikes midnight, and a Cradle-adapted Order of the Dragon sigil suddenly appears in the broadcast with church bells and distorted noises, slowly leading into the band’s 2000 album release ‘Midian’s opening track ‘At The Gates of Midian‘. The stage is set up as any Cradle of Filth-themed venue or festival stage would be – fire torches, candles, smoke, and lights set the mood amidst a dark room, and a large screen backdrop displays the video production and effects that will, from time to time, be superimposed and cut into the broadcast throughout the show.

The band enters as they would any live show, with guitarist Marek ‘Ashok’ Šmerda raising his guitar and pumping a fist into the air – an incredible sense of detachment knowing that there are only tech crews watching from behind the cameras – but still a token of acknowledgement to online viewers.

The camera pans into the raised platform of the stage, hosting Martin ‘Marthus’ Škaroupka’s screen-protected drumkit (remember – Cradle are borderline pyromaniacs!), vocalist Dani Filth carrying a flaming torch, and the new, yet-unnamed fiery-haired female keyboard player/backing vocalist who is appearing for her debut show as an official member. 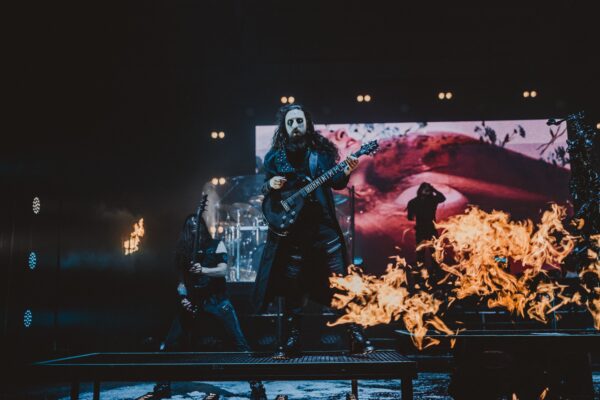 Leading into ‘Cthulhu Dawn‘, the odd feeling of this being a live show hits. The digital effects flash in and out of the broadcast, giving the impression that this could almost pass as a pre-recorded promotional music video – granted this time around the stage set-up would be incredibly over the top for a simple music video.

It is also similar to shots and digital effects added during festival screen recordings, however, the lack of crowd shots adds an incredibly eerie and strange vibe. There is a live chatbox hosted on the Veeps.com website for fans to chat and comment – it’s certainly not exactly the same as meeting old and new friends over drinks for a live show, but it’s something.

Of course, the band doesn’t let the lack of a visual audience affect the performance ability and dynamics – all members perform in this filming as they would in front of a crowd. Filth is kitted out in his usual leather and straps, brandishing a long cape for some time, while other members are in their full gear; guitarist Šmerda donning a simple Pinhead-style corpse paint as a tribute to the cult movie, Hellraiser.

The visuals and audio production are actually very, very impressive for this stream. The camera flows between smooth left-to-right-to-left shots with a full view of the entire band,  close-up shots of members, and an over-the-shoulder drum cam. While the sound is very crisp and clear, the benefit of watching online is that it offers the opportunity for viewers to adjust their sound systems to a preferable EQ. Make sure not to adjust any vocal options though – as Filth is actually giving an incredibly impressive vocal performance between his contrast of harsh gutturals and his signature high-pitched shrieks.

“Welcome to our live stream, Dracula-special”, Filth proclaims in a small introduction between songs, before continuing into 1994’s “The Principle of Evil Made Flesh”. Many songs end with a slow dark fade before returning to video clips relevant to the upcoming song, superimposed over a stage shot. 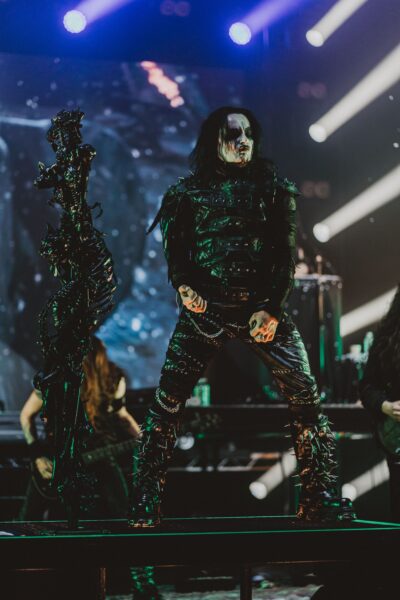 “Thank you very much! Your applause is to commended.” Filth jokes after an intense performance of ‘Heartbreak & Seance‘. “Before we continue, let me introduce our new keyboardist, slash backing singer …slash cook – Anabelle”. It may not come as a major surprise to hardcore Cradle of Filth fans, as London-based Anabelle Iratni is the current member of Filth’s side-project Devilment, but it also offers the convenience of having a keyboard player who can also provide the necessary female vocals for the signature Cradle sound. A suitable find, and Iratni’s vocals, and image, fit the bill.

The band break into 2003’s ‘Damnation and a Day’s single release ‘Mannequin‘, however, Iratni seems to be slightly struggling to hit the right vibe with the backing vocals – put it down to nerves or a small performance hiccup. The song finishes up with Dani offering a funny shrug before a Dracula-inspired video introduction leads into ‘Malice Through the Looking Glass‘ allowing Iratni to come back with a seductive spoken word segment and guitarist Richard Shaw’s hilarious headbang-body-spin.

The instrumental ‘Creatures that Kissed in Cold Mirrors’ offers the band a small rest period before the familiar piano introduction of the hit ‘Her Ghost in the Fog‘ brings the band back into view with an intense strobe and falling snow display. Seeing a live vocal performance of this particular song is always intriguing due to the persistent and quick vocal changes between low growls and high shrieks, never mind the vocal layers in the album version.

It would be confusing and difficult for one single person to pull off a hodge-podge of such contrasting vocals live, so Filth’s slight vocal lagging and breathlessness is forgiven. It is actually admirable that the band didn’t go down the route of pre-recorded backing tracks to help out with the harmonics – this way it keeps the performance much more raw and honest. For the outro, the stage flares up into a surprising strip of pyrotechnics, before slowly settling down into darkness for the outro piano solo.

“A stupid question, I know – but how the fuck is everyone doing out there in TV land?”

The band have offered a nice selection of songs from the very long back catalogue, and finish off the night with 1999’s album title track “From The Cradle to Enslave” after a very sweaty and out of breath Dani Filth requests the viewers to “stay safe out there, but most importantly; stay fucking filthy!”. 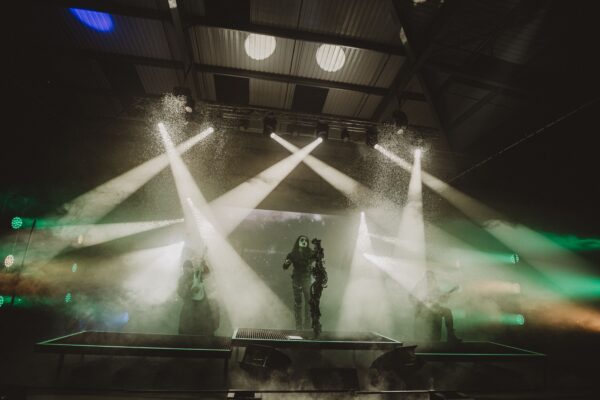 It’s always difficult to offer critique for online shows because there’s an entire reality and dynamic missing. There is a very distorting lull between and during songs and it feels very wrong and uncomfortable. There is also the opportunity to be hawk-eyed with performance ability and any mistakes that members of the band or production team may make.

Saying this, ‘Cradle…‘ have been an entity for over 30 years and members, old and not so old, have developed a second-nature to playing ability for these songs. A tip of the hat must go to the production team; be it sound, lighting, pyrotechnics, or set-up because they made this broadcast emulate a real-life show to the best of their ability – and with persistent setbacks with lockdown and possibly funding, this could not have been an easy task – physically or mentally.

At The Gates of Midian

‪Lilith Immaculate The Principle Of Evil Made Flesh

‪Malice through the looking glass

‪Creatures that Kissed in Cold Mirrors—

‪Her Ghost In The Fog

‪Born In A Burial Gown

‪From The Cradle To Enslave 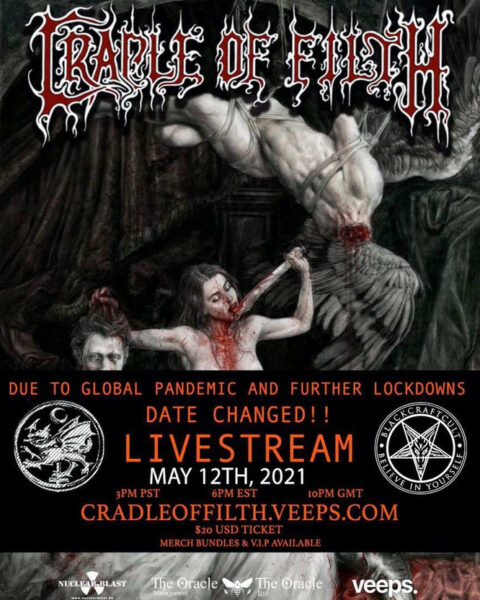