Tonight has been a long-awaited night in the Irish metal calendar. Dutch symphonic metal maestros Epica are landing on Ireland’s shores for the very first time and Overdrive have been waiting with baited breath for it. 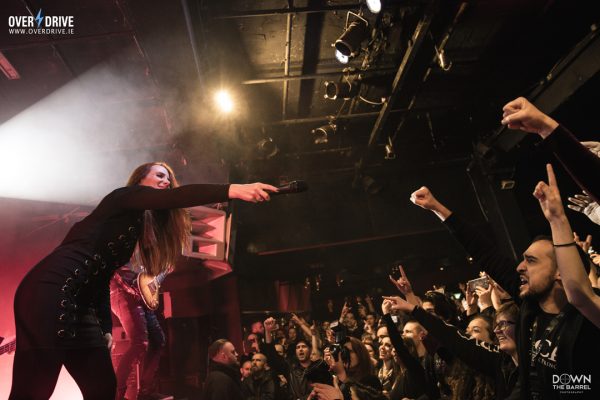 Epica have also brought every single Irish fan to the venue tonight. The doors open promptly at 6.30pm, and within 30 minutes, the Tivoli Theatre is almost full. A good sign indeed!

There’s a very palpable atmosphere hanging in the air, waiting for the metal juggernauts to get their show on the road. Shaun Martin was present for Overdrive to record what was a monumental night

Kicking off tonight is Atlanta-based metal group Oceans of Slumber. At the start of the gig, it seemed as though there were a few teething problems with the sound but it all seemed to work out a few minutes later. 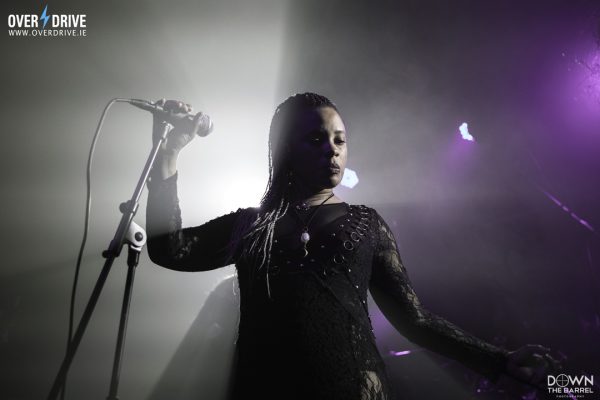 Oceans of Slumber are relatively new to the symphonic metal scene, promoting their latest release “The Banished Heart”, which came out last month from Century Media Records. There an effective mix of heavy and melodic vocals from Cammie Gilbert (lead vocals) and Sean Gary (backing and heavy vocals), and a hugely impressive shred role from Anthony Contreras on lead guitar.

Their third song ‘Howl of the Rougarou’ sees Gary and keyboard player Mat Aleman take a knee in the shadows for a little while as Gilbert perforates the atmosphere tonight with her pitch-perfect vocals and soaring melodies. 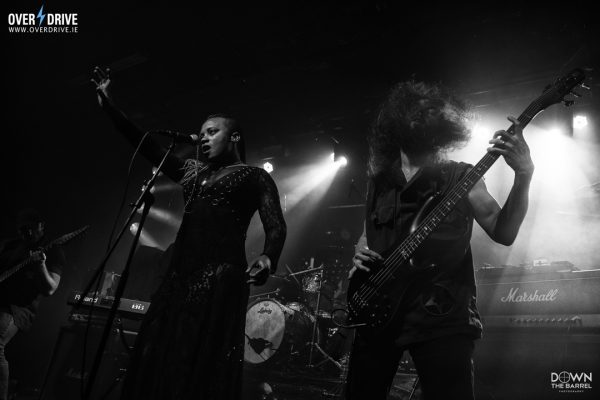 Drummer Dobber Beverly is immensely tight,  but he seems to fall under the same cloud of sound issues, as a few passages of double-bass fills are a tad off-time. But like the teething problems from earlier on, it all works itself out. The chat is kept to a minimum from Gilbert, but she encourages us all to come and say hi after the gig, which I’m sorry I didn’t do, but the opportunity never arose. Oceans of Slumber are a live wire in the prog scene and they’ll be around for a while yet. 3/5

Following on from Oceans of Slumber, are Danish atmospheric black metal outfit Myrkur The brainchild of Amalie Bruun, the last release was in September 2017 entitled “Mareridt” (Danish for “nightmare”). The atmosphere that Myrkur creates is unbelievable. 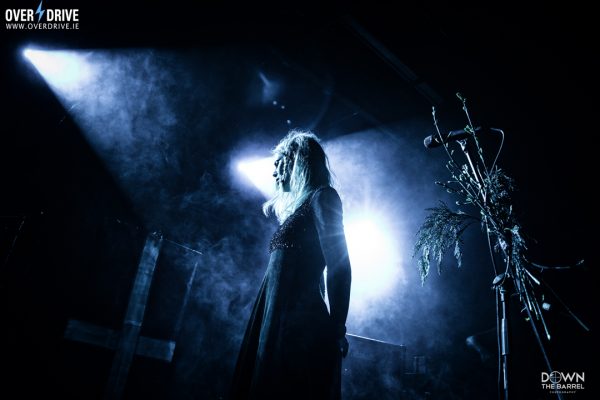 It’s like stepping back in time to Viking era folk music, but with electric guitars, bass and cymbals thrown in (everyone knows the Vikings had drums!). Bruun emerges onstage amidst the smoke and almost seems to effortlessly glide toward the mic. Eerily silhouetted against the effects of lighting and fog, she is incredibly graceful but focused, and at times it is difficult not to become entranced with the beautiful harmonies that she produces with backing vocals mixed into the core of her singing.

It’s a short set of about 5 or 6 songs, but they are a story, rather than quick 3 or 4 verse-blasts of music and lyrics. She is happy to stand at the mic and sing for the majority of the time but then picks up her BC Rich Warlock and jams along with her hooded session guitarist. Amalie is also not afraid of heavy vocals either, and heavy guttural cries echo from her frontwoman poise from time to time. The session musicians with her also play their part in adding to the atmospheric vibe with elongated and drawn out sounds (with a bow on the bass no less). 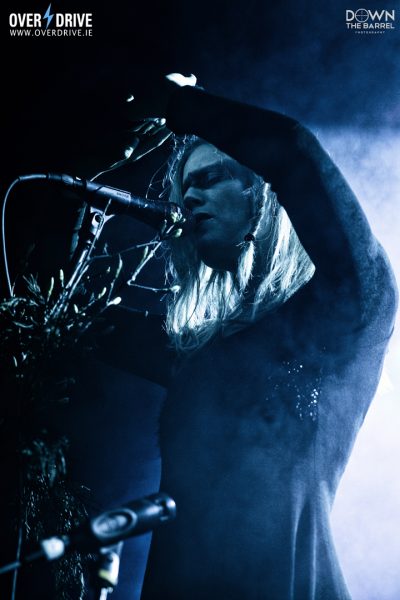 Bruun delivers her songs in both English and in her native Danish tongue, and just like Cammie Gilbert before her, they’re haunting. But the pace is inconsistent… akin to a rollercoaster. Bruun has a vocal ability that has an incredible range and she’s not afraid to use it. She also pays homage to Irish Celtic and folk music, both being a huge inspiration to her. This was a jaw-dropping setlist that takes you beyond sound alone and personally, has opened up an avenue that I’ll enjoy investigating 3.5/

Epica finally make their way to the stage after an intensely long wait by their Irish fans. The band is on ‘The United Principle’ tour and promises some of their old and new stuff, which goes down a treat. Having never performed in Ireland before, the fans have turned out in droves to see this once-in-a-lifetime spectacle and they are about to get one hell of a show.

The light show alone is amazing, even before the band make their appearance. First on stage (to the intro of ‘Edge of the Blade’) is keyboard player Coan Janssen, who makes a rather large ballet leap across the stage to mark the occasion! Followed closely by drummer Ariën van Weesenbeek, who starts kicking immediately starting the clapping among the audience, guitarists Mark Jansen and Isaac Delahaye follow, with bassist Rob van der Loo. The meat of the song is in full swing, when iconic frontwoman Simone Simons makes her grand entrance, much to the raucous applause that is drowned out by the cheers of the audience. Let’s get started! 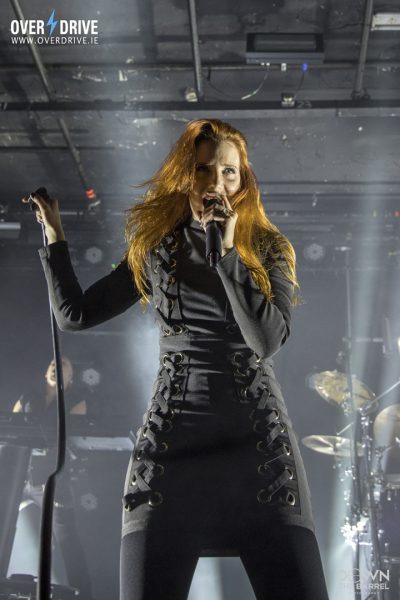 From the very beginning, Epica are the epitome of professionalism. Granted, there is not a whole lot of chatter from them, but the gel of their band is as plain as the nose on your face. Each time a song is started, it seems like it’s the first time the band has heard it, and the enthusiasm has become part and parcel of their stage performance. I last saw Epica at Wacken Open Air back in 2009, and not much has changed in their stage show from what I can remember. There were a quick few shout-outs to us all for turning up on their first Irish date, but the greetings were quickly dealt with because they came here to play metal, not yak at us. ‘Fight Your Demons’ is sung along by the crowd at huge volume, and as Jansen declares the next song ‘Storm the Sorrow’, that mood is amplified times 10. Devil horns and bobbing heads are everywhere, and there is very little space to manoeuvre as the venue seems to be fully packed out. New and old material spew forth, like ‘The Obsessive Devotion’ and ‘Ascension’, and each mobile band member takes turns greeting the front-rowers, including Janssen, who has found himself with a keyboard that looks like it’s been held too close to the fire too long. 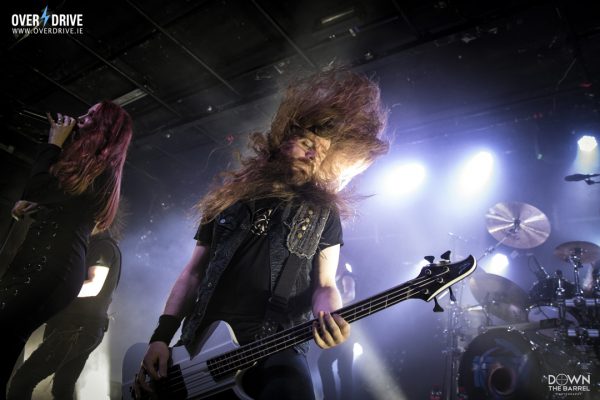 He is the smiliest person I’ve ever seen at any band in the Tivoli, and he looks delighted to be doing what he is doing – the rotating podium that supports his keyboard is a main theatrical piece in his performance tonight, as he scissor-kicks and leaps from one side of his station to the other, at is place up beside drummer van Weesenbeek.

The light show has to be the most impressive piece of stage production I’ve seen with a band. The only band I have seen surpasses this (in my experience), is Fleshgod Apocalypse at Bloodstock Open Air in 2015.

Each beat is timed perfectly with a change of pace and colour, and at a few points, the strobe lights appear to make everyone move in slow motion. Coupled with the fog machine (working overtime tonight… that’s for sure), it creates an other-worldly environment of fantasy and legend. Delahaye is a stunningly composed guitarist, and his solos and fills are a crunch point in Epica’s show since joining them in 2009 after Ad Sliuijter’s departure (he has since gone on to work on solo projects and also with Delain). Simons, however, is a completely different beast. 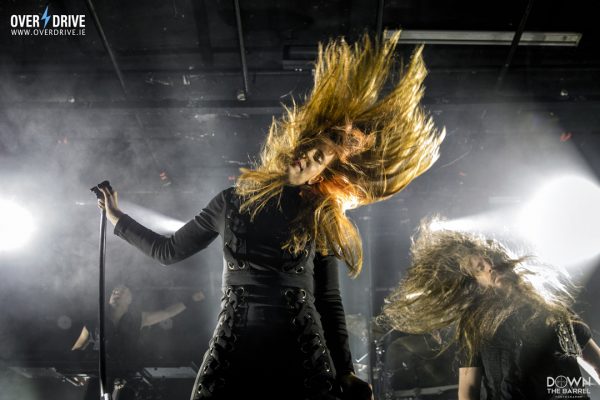 Her vocal ability is a powerhouse, and it is undoubtedly the fulcrum on which the band balances. It is hard to establish a reality where her heightened octave levels would fit anywhere else, and this band has the parts that make it a well-oiled machine. We get the rare delight of a drum solo from van Weesenbeek after ‘Cry for the Moon’, which has become a rather non-existent part of metal shows lately. Simons then lets it be known that her favourite song of their entire catalogue, ‘Unchain Utopia’ from the album ‘The Quantum Enigma’ needs help from everyone, and we duly agree. 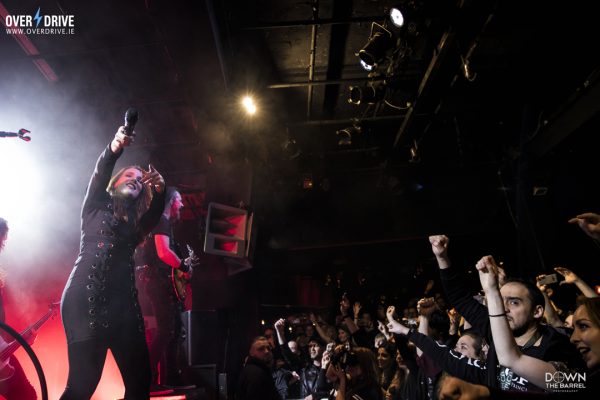 But then something really special happens: she asks for the lights to be turned off, and everyone to turn their flashlights on their mobile phones for ‘Once Upon a Nightmare’. That looks really cool, as the illumination is surprisingly apt for this type of song.

This marks the end of the gig and the band leave, but they don’t stay backstage for long. Janssen comes back out first and gets his melted keyboard out again, but unfortunately, it refuses to work. As the rest of the band appear and get stuck into ‘Sancta Terra’, he takes a walk (his keyboard is now working perfectly) and poses with fans in the middle of the song, and at one point takes a selfie on a guy’s phone for him!

Eventually, the night closes with 2 old favourites ‘Beyond the Matrix’ (with a lot of jumping), and ‘Consign to Oblivion’, which produces the first wall of death of the night. It seems nobody wants to leave here with any gas left in the tank. They get their wish.

Epica bid farewell, and promise that it won’t be 16 years for them to return to Irish shores again. (4/5)
Setlist
1. Edge of the Blade

2. Sensorium
3. Fight your demons
4. Storm The sorrow
5. The Obsessive Devotion
6 Ascension
7 Dancing in the Hurricane
8. Unleashed