Slane Castle, folks. The highlight of the Irish home-grown rock scene calendar. We have 3 groups born and bred on our emerald shore, 1 borrowed from the neighbours across the pond, and all supporting rock juggernauts Foo Fighters ready to get down and dirty with Ireland. The sun is out, the revelers are in full force, and early on a Saturday afternoon, Overdrive has HQ hell-raisers Shaun Martin and Karyn Corrigan on-site to report on what the day had to offer. 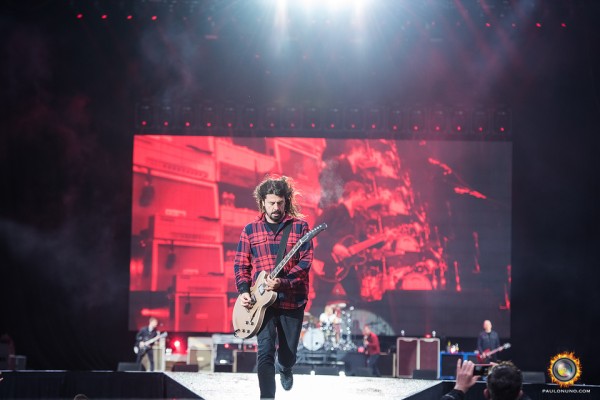 First onstage we have up-and-comers, The Strypes, from Cavan, promoting their album Little Victories. Their set is short but sweet, breaking the ice on what will be a huge day of music and festivities at Slane. The guys know that people are here to see bigger bands, but the gusto in their volume is still there. Kudos for not letting it get to them, as they revel in the glory of treading the same boards as Thin Lizzy, The Rolling Stones and U2, the band command the huge stage with ease and confidence. Scumbag City Blues is the bands biggest hit, and they kick out the jam and just have fun. They thank us for listening, bid us adieu, and make way for Northern rockers Ash.

Starting their set tentatively, “Evel Knievel” rings through the crowd. From the get go there is an air of energy as a (relatively) small crowd pushes to the front of the stage. What ensues for the first part of Ash’s performance, is a game of cat and mouse. Whereby they tease the audience with older songs which the growing crowd laps up, to newer material taken from their recent album. As Go! Fight! Win! rings through the air, the punters further back sitting on the grass basking in the sunshine, can be seen singing some words. By the time Kung Fu’s first chords resonate the crowd are perked and interested. The crowd by the stage can be seen clapping and singing animatedly showing that this Northern Irish rock band knows how to please their fans. A crescendo can be felt building up.

Cocoon is up next. A song off their new album Kablammo! an amazing drum beat opens, stimulating energy and interest from the audience. Tim gets the crowd singing by the second chorus with the catchy elongated melody to Cocoon – the chorus line (simple eh!). A modulation at the end just adds to the atmospherem leaving the crowd hanging, but the energy remains high for the rest of their set.

As the rain remains at bay for their performance, Wheeler takes the time to relay to the audience how amazing it is for them to open for Foo Fighters. 23 years ago to the month, Wheeler went to see Nirvana in Belfast, obtaining Dave Grohl’s autograph after the show. As big fans of Foo Fighters themselves, it is a dream to be asked to do the show and to be here today in Slane Castle. In true polarity,  as Ash start their famous Shining Light,  the sky completely dulls over and even the sun is hard to see. The crowd are in full swing with prongs of people flooding down the sides of the venue and filling in most of the empty space. Introducing the next song,  Wheeler mentions that the band came on early to play this song, before Ash kick into their cover of The Undertones hit Teenage Kicks.

They finish off their set to an audience that spans a couple of thousand fans both old and young. As they launch into the anthem that is Burn Baby Burn, the place goes mental. It is the ultimate set-list of both old and new to enthrall the crowd and keep them coming back for more. Kablammo!, Ash’s new album, was released on the 25th of May and they will be playing their sold out gig in Dublin’s own Whelan’s venue to promote the album on the 7th June 2015.

To chill everyone out and get them singing along, we next have Wicklow native Hozier (or Andrew Hozier-Byrne). Not as heavy or rock-based as his predecessors on the stage today, but still gets the crowd up and pumping. Radio favourites like Take Me to Church, and The Work Song are greeted by roars of appreciation, and the singalongs for all are impressive. By all means, it’s a relaxing pulse-raiser after the blistering Ash performance, with swaying hands in the air and smiles plastered on everyone’s face. But then the big guns started to warm up. Hozier had a brief set of 13 songs and made sure he expressed how honoured he was to share the stage as some of his past heroes, and thanked everyone for listening, before The Kaiser Chiefs descended with their raucous, nightclub-frenzied Britrock chest-beaters, like the opening anthemic tune Everyday I Love You Less and Less.

The dancing starts immediately and I am surrounded by partying couples who have heard this so many times over the years that they have their own dance moves! I’m dead center of the crowd, so I get the sound as crystal clear despite the wind making the speakers sway a little. To be fair, this is going down a treat with young and old alike. Touring on the back of their latest album Education, Education, Education and War, the Chiefs waste no time in getting the blood flowing, as it has now started to rain….. heavily. Front-man Ricky Wilson declares his intention to keep the crowd warm, and doesn’t disappoint. As the set progresses, the band throws out well-known hip-shakers Ruby, I Predict A Riot (and then immediately afterwards, LAUNCHING themselves into a fucking awesome cover of Pinball Wizard by The Who), and closing with Oh My God (I Can’t Believe It). There isn’t a steady body in the sea of people transfixed on the stage; a camaraderie that is born through the bond of turning up to just listen to music and forget everything else that is happening outside this otherwise sleepy little town. The skies dry up before the song ends, and the smiles return as the anticipated rock behemoths prepare to grace our eyes with their presence.

Say hello to the The Foo Fighters, ladies and gentlemen. They’re back to carve their name in the stone of our musical homes. Led by the nicest guy in Rock Music Dave Grohl, the mass of fans greet the band and they genuinely seem to be happier than those in the audience. 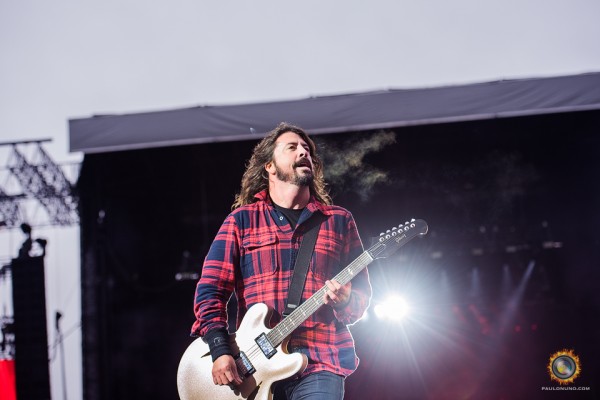 “I’m gonna keep you warm!!”, he decrees. And dude….. it doesn’t stop until the sun goes down. Kicking off with Everlong, they roll out the fan favorites (which is basically every goddamn song they have, if the reactions are anything to go by – the atmosphere is electric!), moving into Monkey Wrench and Learn To Fly. (Cue the sing-alongs again, as I get flashbacks from their promotional video for this song where they try to land a plane when everyone else is baked out of their noodles on coffee accidentally spiked by Jack Black). But unfortunately the heavens open again. That doesn’t faze Grohl in the least, as the guys then pump out Something From Nothing, the opening track on their latest record, Sonic Highways. 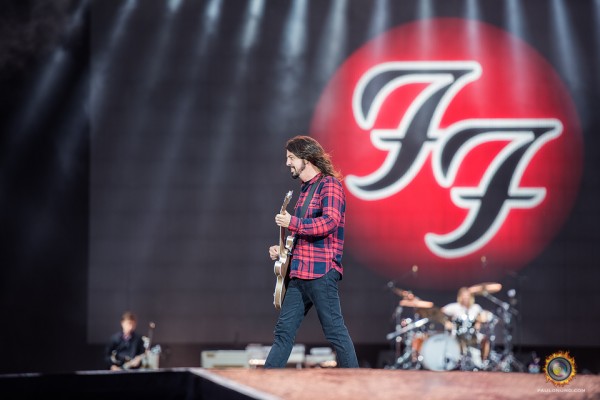 Owing to the bad weather, Grohl states that usually the other mobile band members, Pat Smear (guitar), Nate Mendel (bass), and Chris Shiflett (lead guitar), would join him on the second stage for this next number. “Y’know, usually the guys would join me out here for this next one, but…. It’s kinda raining. So I’m gonna do it.” He says it matter-of-factly, without missing a beat, as if it means nothing to him. Just another day at the office – but it means everything to us. Grohl saunters down the catwalk to the second stage in the pouring rain armed only with an acoustic guitar. He treats us to a quietened version of My Hero, and it’s like everyone is reading the lyrics off the screen behind him. Some couples take each others hands and others wrap their arms lovingly around waists as they sing at the top of their voices about someone that means a lot to them; someone they idolise; a person in their life that they aspire to. Everyone has someone like that in their life, and for a few brief moments, that person is brought to life with about 60,000 others.

But the band is just getting warmed up. We ain’t even close to halfway done folks! They break out a legendary tune, by the first band to ever headline the Slane stage, Thin Lizzy, and pay homage by smashing Jailbreak across our heads. And keep that shit rolling, because booming on the drums is Taylor Hawkins, who causes uproar by starting and finishing (and singing) Under Pressure, by Queen, themselves Slane legends. 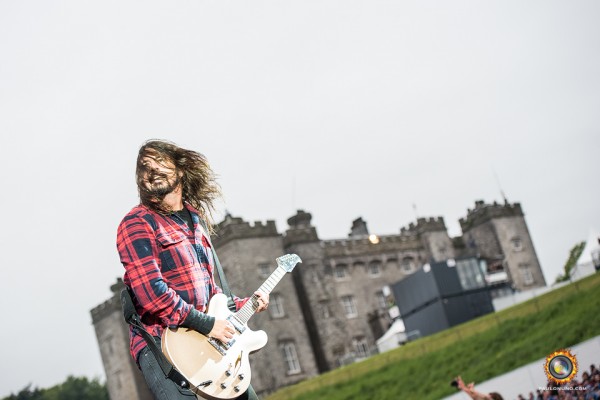 Grohl recalls traveling the country with his mum and sister after the Nirvana tour in 1991, and professes his love for Ireland, and out comes another boomer, Breakout, quickly followed by Outside and Best of You. If you can believe it, they close out with Let There Be Rock, by the rock deities AC/DC. I lose my shit totally, as it’s the end of the night, and fuck it – I have my notes taken for tonight! Cue the headbanging! What a way to bow out of a truly immense show.

It ends all too soon, as by the end of the song, there is an immense firework display by the estate, and a cheeky impromptu support act by one of the members of the Irish Police Force which also goes down a storm. It just goes to show that no matter what you do for a living, who you are, and what the weather is like, when you go to Slane, you go to party and have fun.

That’s exactly what we did. 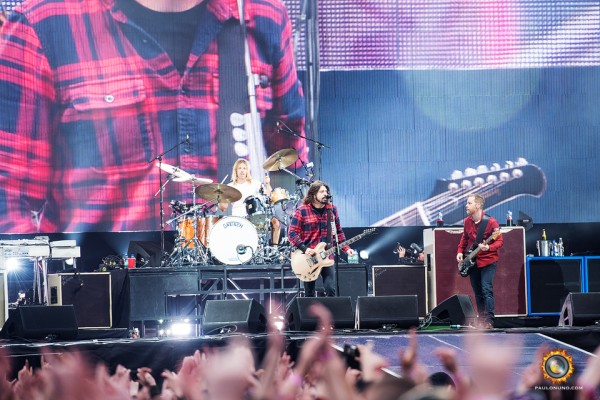 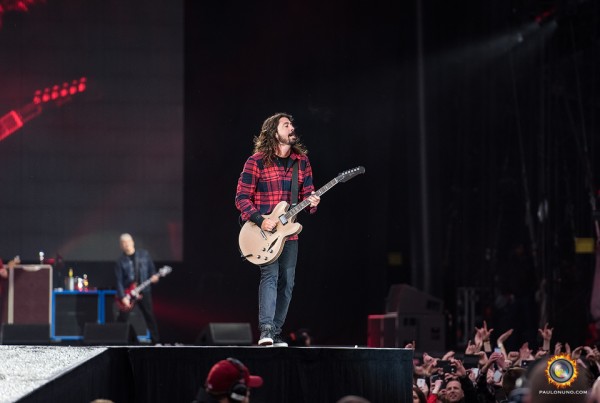 It Will Come Back

Take Me to Church

Everyday I Love You Less and Less

Everything Is Average Nowadays

I Predict a Riot

Pinball Wizard (The Who cover)

This is a Call

Cold Day in the Sun

Let There Be Rock (ACDC cover)