The Tivoli Theatre opens it’s doors to the first of many live shows in the Irish capital with a double headliner from Chris Jerico’s almost full-time project FOZZY and powerhouse sleaze warriors HARDCORE SUPERSTAR! Overdrive was there to soak up all the riffs and have a snoop around the refurbished new venue! Step inside….. 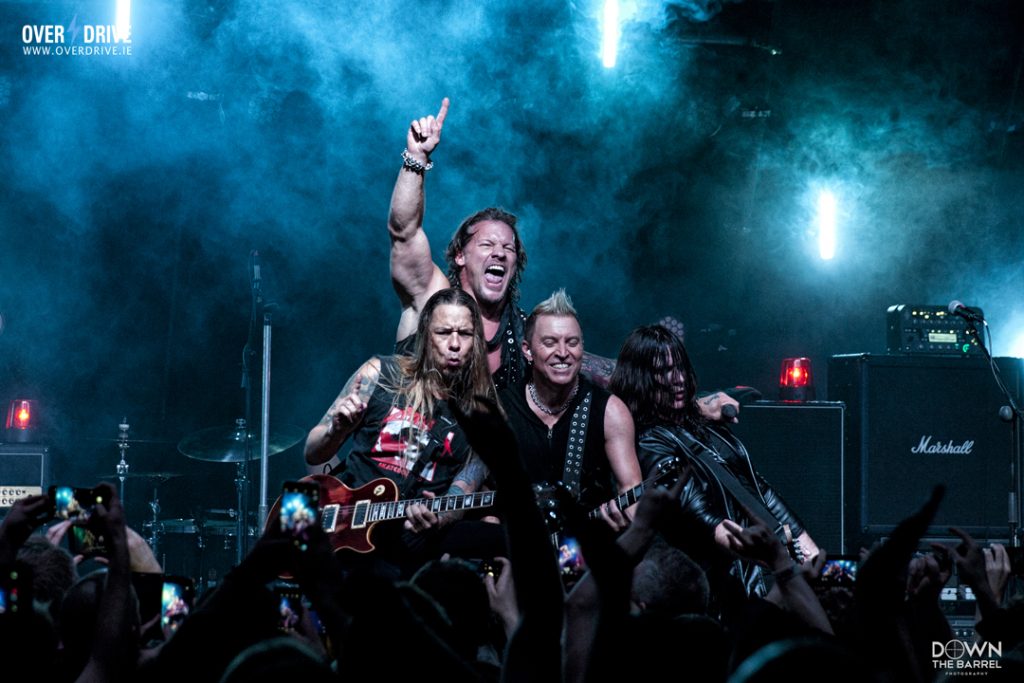 October and November tend to be busy months gig wise in this small corner of the world, with a lot of bands starting or finishing tours in Dublin, Ireland, and this weekend is no exception.

Tonight sees the Fozzy/Hardcore Superstar show roll into town and it’s always going to be a fun when either of these bands hit your local venue let alone a joint headline tour!

On this European run, they also have Gothenburg’s The Last Band and from the US making their Irish debut Madame Mayhem. Along with tonight’s line-up, tonight marks my first time seeing a gig in the Tivoli, for well over twenty years. It’s great to have another venue in the city that can now cater for Rock/Metal gigs and on first impressions, it looks like it’s going to be a great addition to the broadening scene. 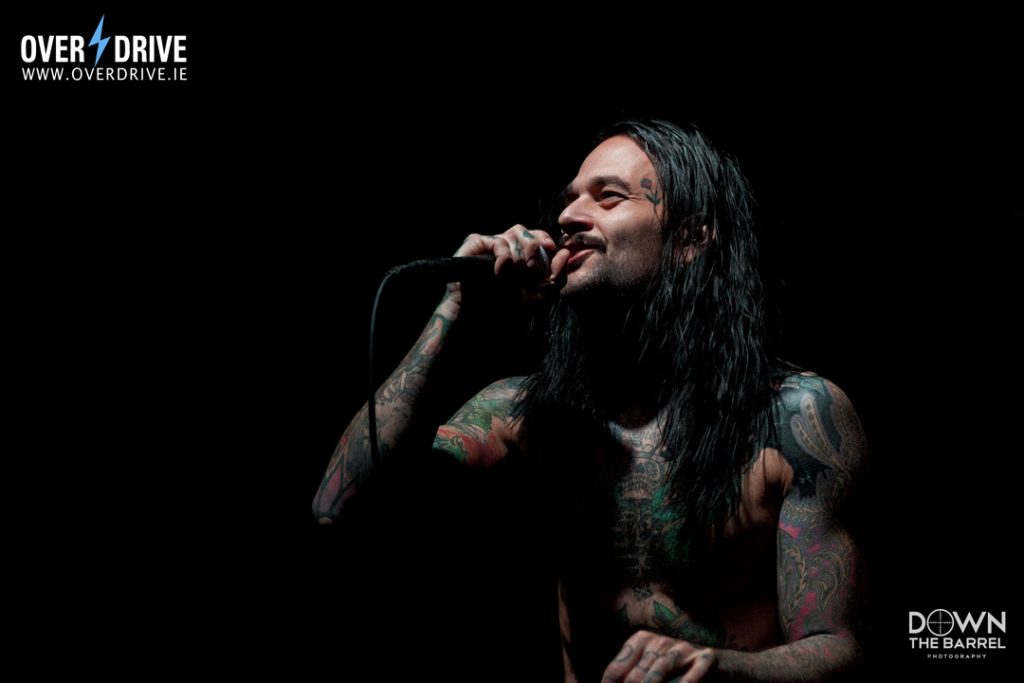 Opening proceedings are the heaviest band on the bill, The Last Band (pictured above), who were last seen on these shores supporting fellow Swedes Avatar last November.

These guys are full-on intense energy coupled with a great attitude. Unfortunately, their start time isn’t helping them tonight as a larger crowd would have made for an even better atmosphere had they not been littering the local watering hole across the street instead. 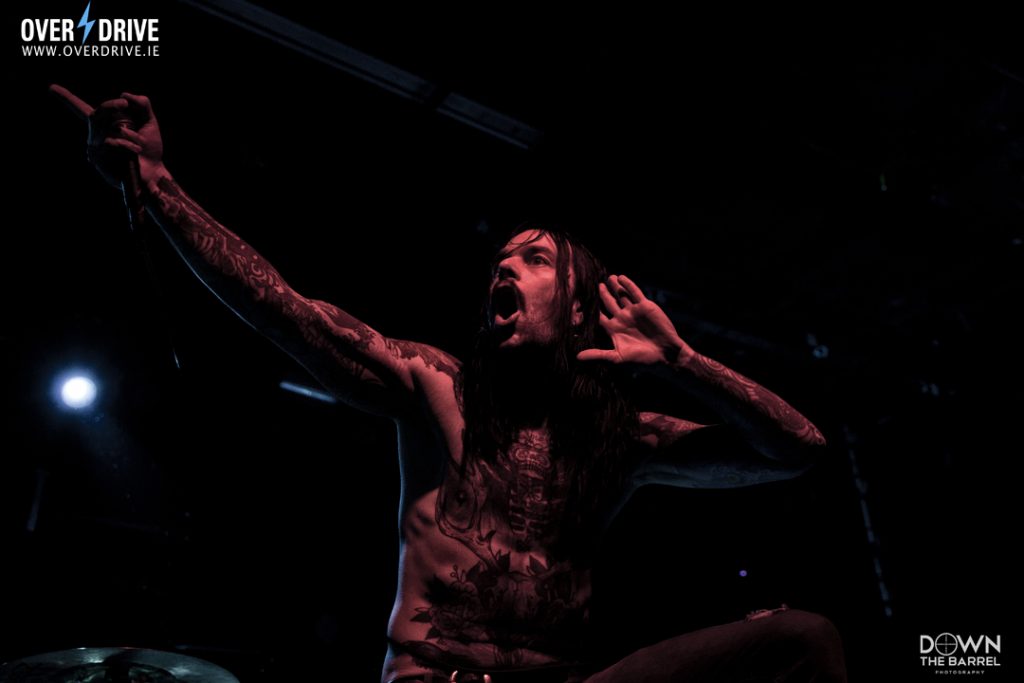 Either way, the band put in 100% and kicked some serious ass! Musically TLB are a sonic assault mixed with sleaze and hard rock so on one hand, you get a totally aggressive and pretty intoxicating mix while accompanied by screaming solos and crunching riffs that possess a really dirty edge at the best of times.

Unfortunately the guys had to  drop one song from the set due to starting a little late, but there was still more than enough in what they did to make you want to see these guys back again soon and with a longer set time. Tracks like the new single “So What” and the excellent “The Hunt” are highlights tonight, the band get a great reaction from those present, so hopefully we’ll get to seem back over for a headline set in 2018. 4/5 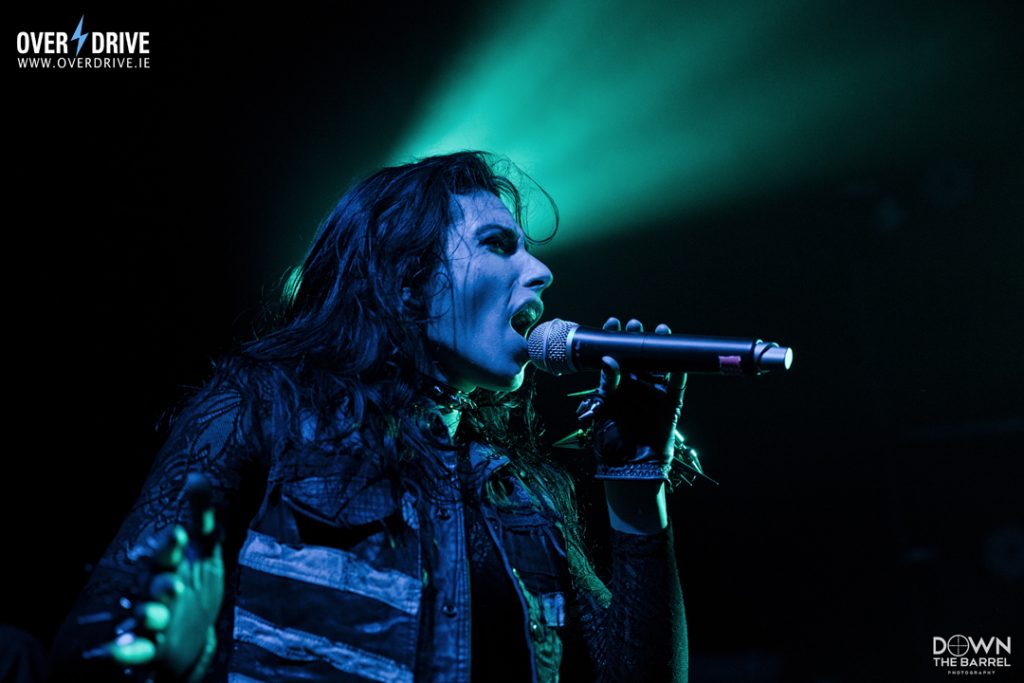 Next up and hailing from the US are Madame Mayhem, a female fronted rock band that just didn’t really grab me at all. The focal point of the band is Madame Mayhem (aka Natalie Ann Cohen) who is undoubtedly a talented vocalist, and impressively maintains poise while bouncing around all around the stage.

For me, there’s a disconnection between those on stage, more of a collective than a 100% fully functioning unit, but that could just be me or perhaps the night that was in it. Everyone played fine, but the songs didn’t hold my attention enough. Highlight of the set for me was “Monster” and a really nice guitar solo towards the end of the set, for me they were very bland, but others in the crowd were certainly enjoying the music, and that’s one of the joys of music, all of our tastes are different and not every band can hit your sweet spot. 2/5
Hardcore Superstar blew the roof off the Academy back in 2013 when over here with Buckcherry, tonight they are doing another co-headlining show, this time with Fozzy, but the reality is when the lineup was announced it was HCSS that really peaked my interest. 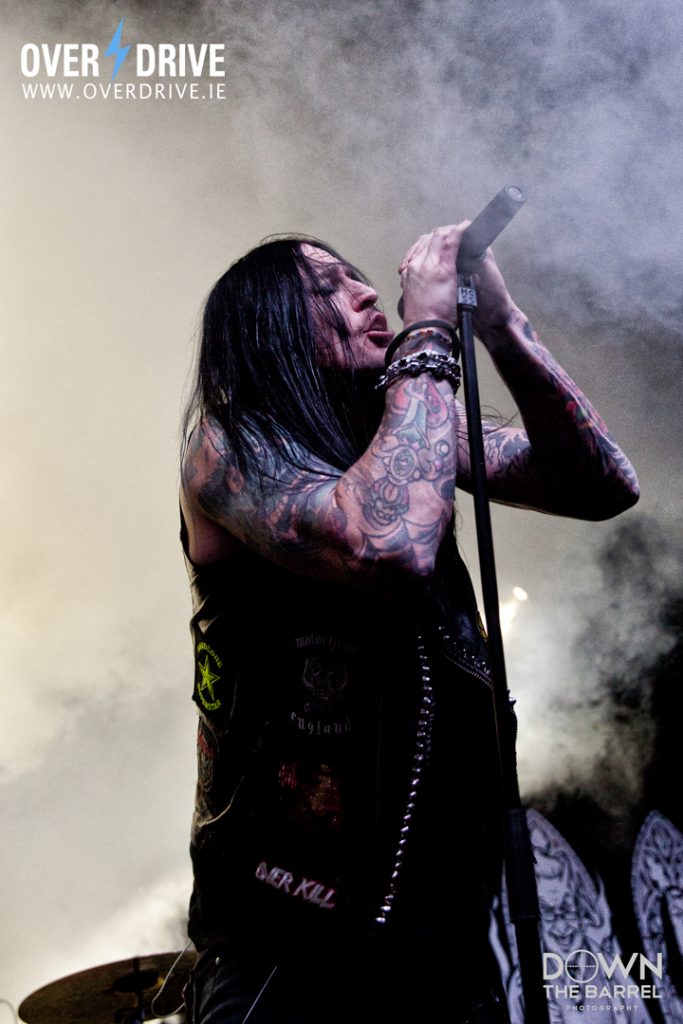 They are just one of those bands that always delivers and tonight was no exception. HCSS has it all when it comes to a live setting. Frontman Jocke Berg, who is not only an excellent vocalist but one that has that ability to bring the audience into the show with ease, has the Tivoli Theatre in the palm of his hands tonight and the energy is flowing at a consistent rate.

By the time the guys kick off tonight’s setlist, the attendance has thankfully swelled to a much healthier looking venue which explodes when they unleash first track “Beg For It”.

The energy levels don’t dip for the whole set and as we approach the second half of HCSS’s set, it’s anthem after anthem, giving plenty of the Hardcore fans the opportunity to raise fists in the air and sing out loud.

This is infectious stuff and it’s bloody hard to keep that smile off your face, tonight we get two very different headline sets and two completely different – but none less – effective ways to please the audience that has come to be entertained.

Tonight, HCSS are conducting business with a smile on their face and it’s blatantly obvious that these Gothenburg natives are having a blast doing what they do and long may it continue!

Highlights were definitely “Sensitive To The Light” and the pounding “Last Call For Alcohol”, “Moonshine” and a killer version of “We Don’t Celebrate Sundays”, a couple of more songs would have been nice, but they ended on a high with the crowd wanting more. 4.5/5

Dreaming In A Casket

Sensitive To The Light

Have Mercy On Me 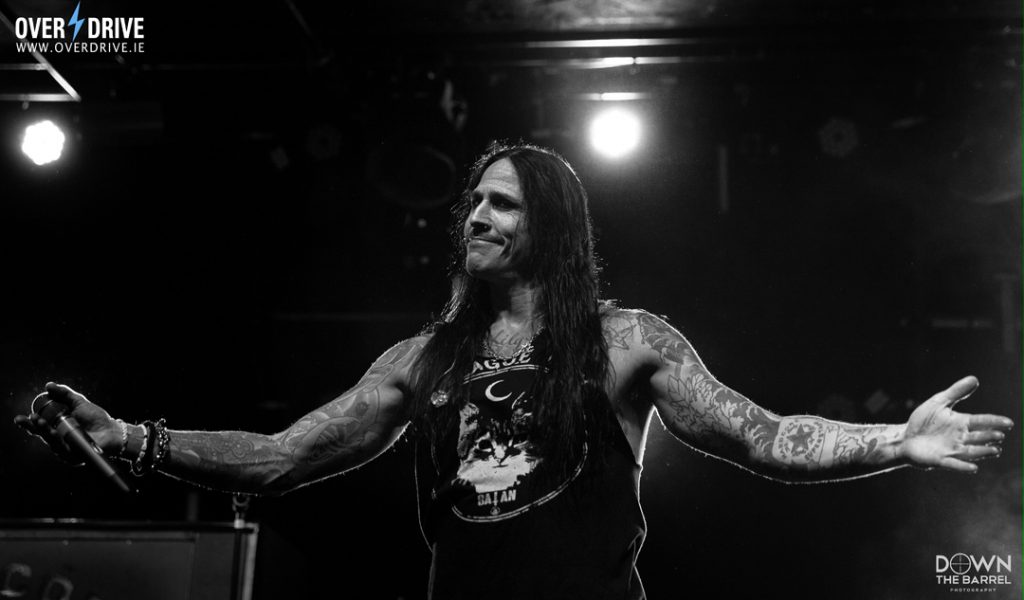 Closing this evening’s entertainment, and it really is entertainment, are Fozzy. A band that are perhaps, a bit like marmite as they can provoke heated discussions amongst some of the closest of friends.

Personally, I just wasn’t feeling it that much. My philosophy though is that a gig is a show, and it’s certainly not just for me.  So, for the Fozzy set I’ve looked at it through the eyes of one of the many that had raised fists for the majority of this set. 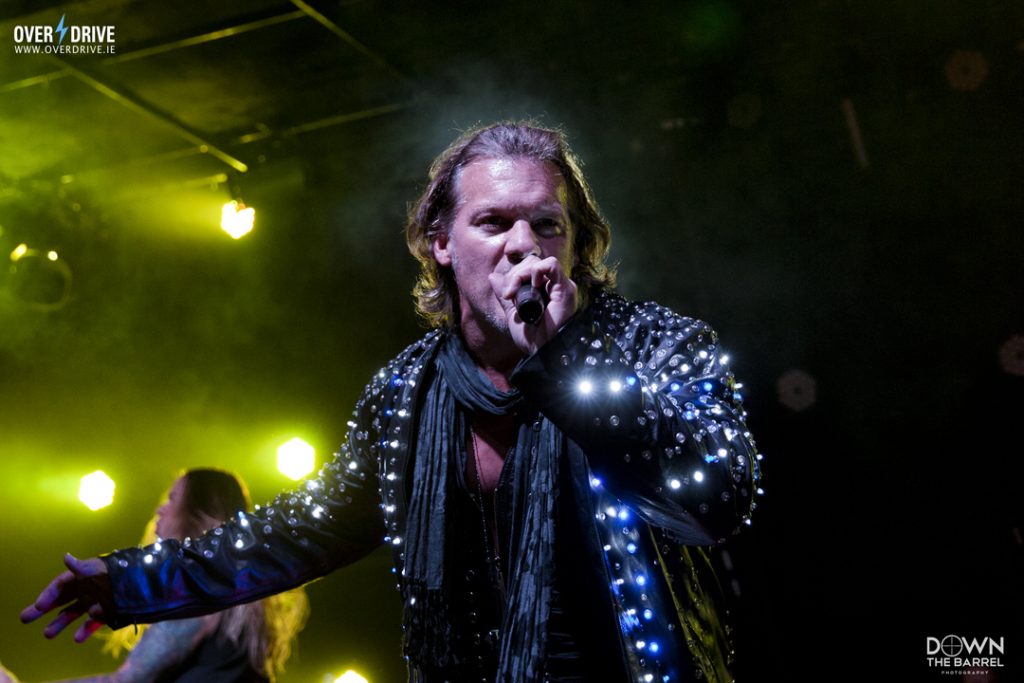 In case you didn’t know, the band are fronted by professional wrestler, Chris Jericho, and let’s get this out there from the start, he’s a born frontman, charismatic, a showman, loves the limelight and more importantly, loves the music, and is without a doubt a massive fan himself.

The band themselves? Well, they are about as professional as you can get. Tonight,  everything looks right, the sound is polished and tight, with the band pulling off a really great show. Jericho as a frontman demands attention, but for that he also gives just as much back, constantly interacting with the crowd. 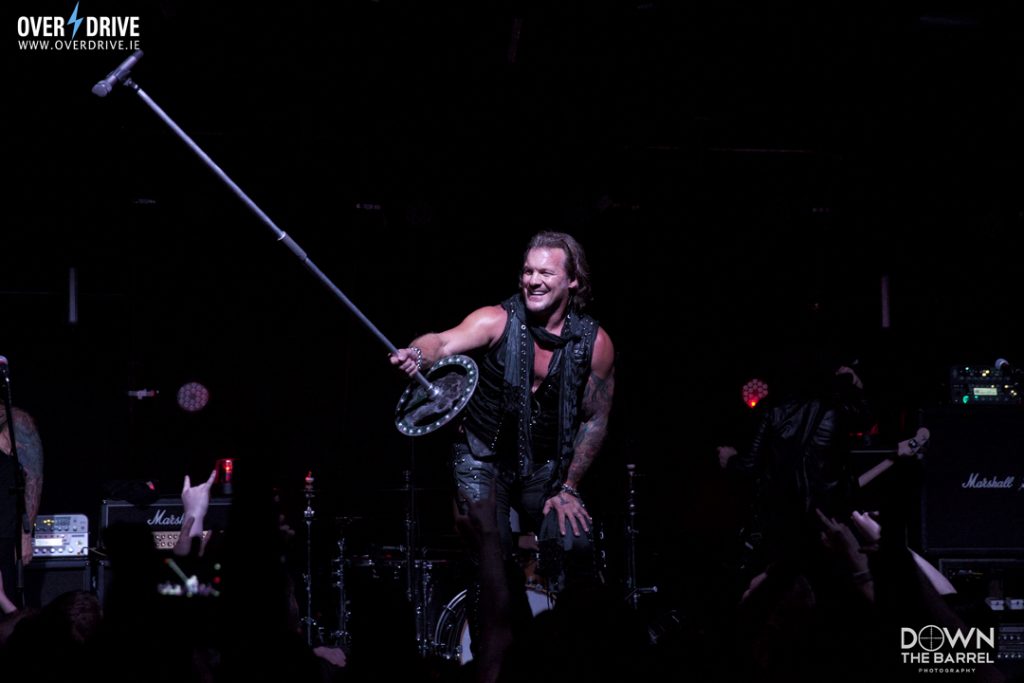 It would be remiss was I not to mention the stage outfits, Jericho has a few diva-changes here and there, which included his now infamous dazzling show jacket, which adds a little pizzazz to the show.

Fozzy performs a good mix of the history from their catalogue which highlights the bands seven-album discography (yes, seven studio albums).

Opening with the title track of the latest album “Judas”, the highlights for me are “Don’t Start A War” and the sublime encore – their cover of Abba’s “SOS”, which absolutely takes the roof off the venue.

Whatever you think of them, Fozzy are all about entertaining their fans. You can look as hard as you can, however, you won’t find any shoegazers in this band. I just might be converted over to the Fozzy side! Good stuff indeed! 4/5 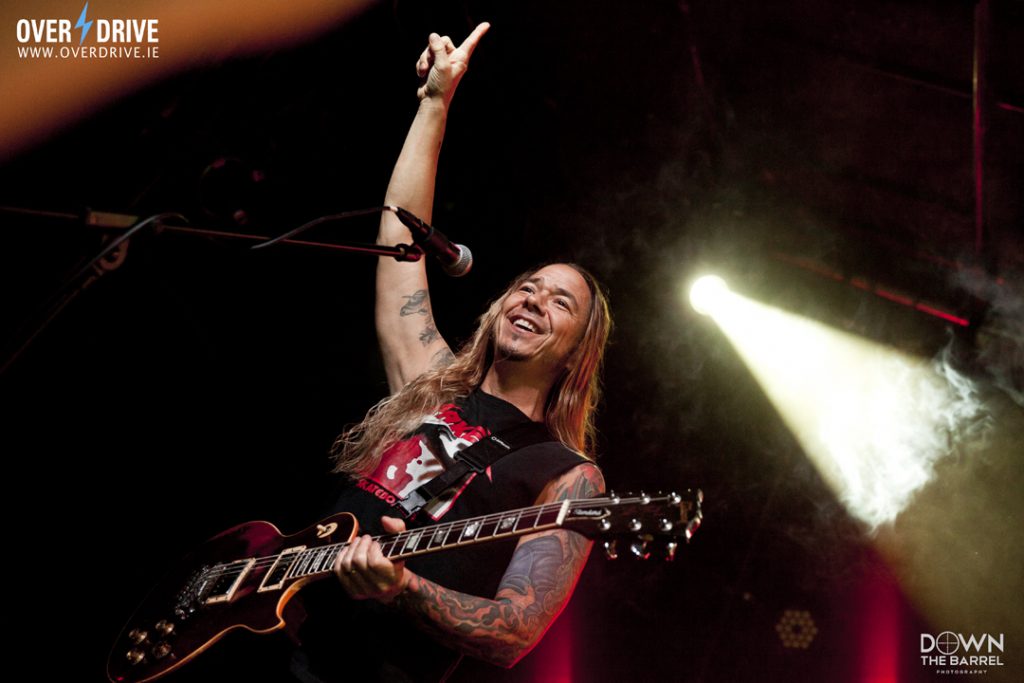 Spider In My Mouth

Do You Wanna Start A War

Photo Gallery – Down The Barrel Photography © 2017 exclusively for Overdrive.