Dublin’s Academy plays host to Grammy-winning Hard-Rockers, Halestorm as they make their return to Ireland a second time for their first sold-out show. Here’s what happened. 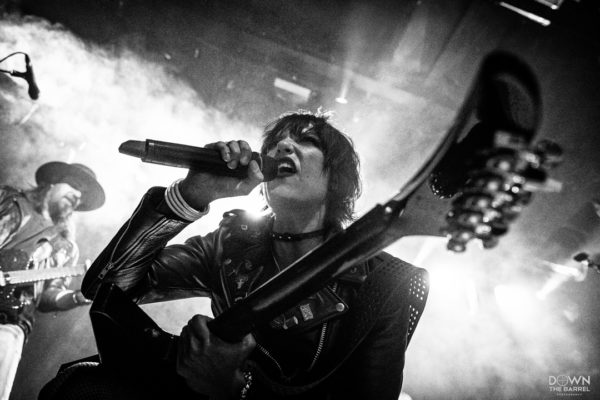 When a venue is nearly at capacity a good hour before the opening band are due to hit the stage, you know that you’re in for something special. With a mix of old and young, The Academy is packed to the rafters by the time Dublin-based five-piece, Scathed take to the stage.

Fronted by the infectious frontwomen, Ainsley Kavanagh, Scathed get off to a bumpy start as they battle through the mix in the house PA. By track two things are a little better but unfortunately, the guitars are drowned out by drummer Ronan Murphy’s dominating kick and at times it’s damn near impossible to hear guitarists Luke Menton and Ryan Doyle through the mix.

Sound problems aside, Scathed throw everything they have at the packed venue and with their nerves well and truly buried by track three in the set, they carve out an impressionable performance that is loaded with guts and hard-rock swagger. Kavanagh’s vocal ability shines through proving that she carries a hell of a lot of talent as she owns the lip of the Academy stage. 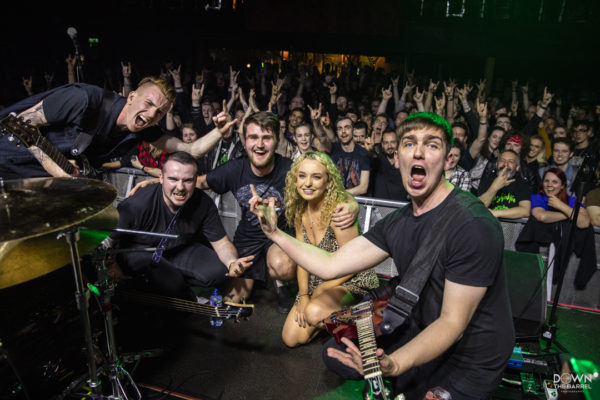 Scathed are a young band with seasoned blues-infused hard rock that at times wonders into Tremonti style machine gun riffage. Like a promising young wine, Scathed can only improve with time and I urge you to keep an eye on them. 3/5

And so to the headline act! Halestorm takes to the stage in darkness after the intro music has played out. There is a moment of almost awkwardness as they stand in silence before the sold-out capacity and then BOOM! they explode into ‘Vicious‘ the title track off their most recent studio offering and from the get-go, Lzzy Hale just dominates in a way that most can only dream of.

With the guitars sounding a little muddy to start off with, both Lzzy and Joe (Hottinger) duel off each other for the remainder of the night as Arejay (Drums) and bassist Josh Smith provide a tapestry of air-tight, low-end groove that is as solid as oak.

A deafening reaction to Love Bites (So do I) seems to take Lzzy by surprise at first and as the set progresses, she and the rest of the band become one with the audience who lap up every last drop that Halestorm bring to the stage. 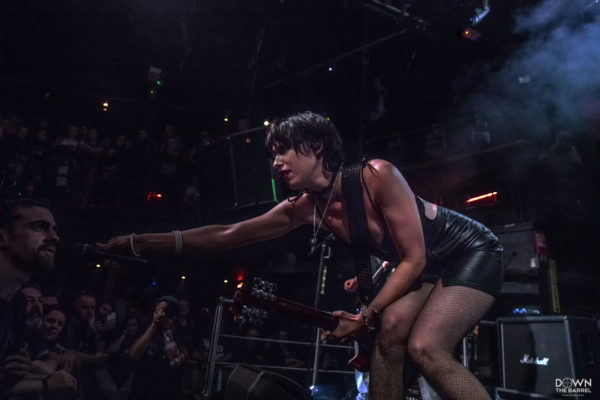 With this being the very first show of the European tour, Halestorm are most certainly enjoying themselves tonight and treat the audience to a peppered selection of tracks from their four-album discography including ‘Innocence‘ from 2009’s debut, much to the delight of the uber fans who chant back every word.

Arguably one of the most impressive vocalists in the game right now, Hale opens up her pipes for an acapella intro of ‘I Get Off‘ before launching into ‘Do Not Disturb‘ followed by ‘Black Vultures‘, ‘Amen‘, ‘The Silence‘ and ‘Skulls‘.

A brief drum solo from Arejay mid-set is followed by a non-stop barrage of belters including ‘Mz. Hyde‘, ‘It’s Not You‘ and the brain-hacking ‘Freak Like Me‘ wraps things up and so begins the familiar chant of: “ONE MORE TUNE“!

With just a few minutes of anticipation, the band rip up the stage with a smouldering delivery of ‘I Miss The Misery‘ followed by ‘Killing Ourselves to Live‘ and finally ‘Here’s to Us’ which brings the show to an end. 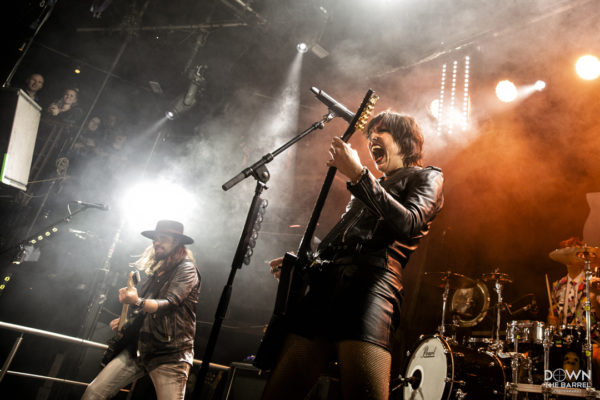 The next time Halestorm return to Ireland, you’ll be seeing them in bigger venues such as The Olympia or perhaps the 3Arena as their on a direct course for world domination. 4.5/5

Vicious
Love Bites (So Do I)
Innocence
I Am the Fire
Do Not Disturb
Black Vultures
Amen
The Silence
Skulls
Uncomfortable
Drum Solo
Mz. Hyde
It’s Not You
Freak Like Me
Encore:
I Miss the Misery
Killing Ourselves to Live
Here’s to Us

Halestorm’s new album ‘Vicious‘ is out now via Atlantic Records.

Photos – Down The Barrel Photography, courtesy of MCD Productions © 2018