America thrash metal hellraisers Havok are in Dublin for one night only and have brought their own special circus to support them. 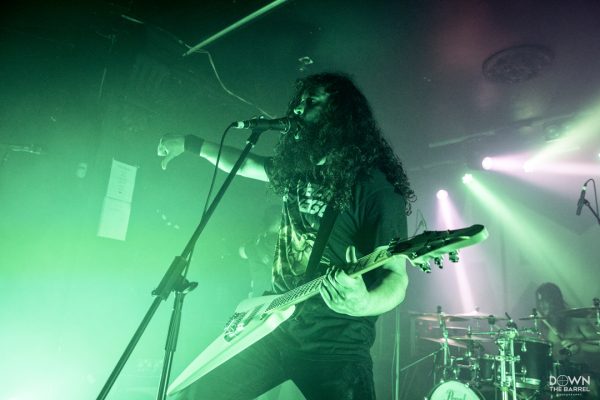 There’s a large crowd at the Voodoo lounge in Dublin to see the ruckus and Overdrive has been waiting on this gig for a while. Shaun Martin was there to see what happened and barely made it out alive.

There’s a big enough crowd here for a Tuesday night, especially for a band that has only been around since 2006 (and in Australia, so by Ireland standards, that’s a fair achievement!).

Harlott gets the ball rolling bang on time and makes their entrance, reeking of 80’s California thrash, with claw marks of Slayer and Testament. It’s like “Kill ‘Em All” and “Diabolus in Musica” had a child and was reared by Dave Mustaine and Chuck Billy. 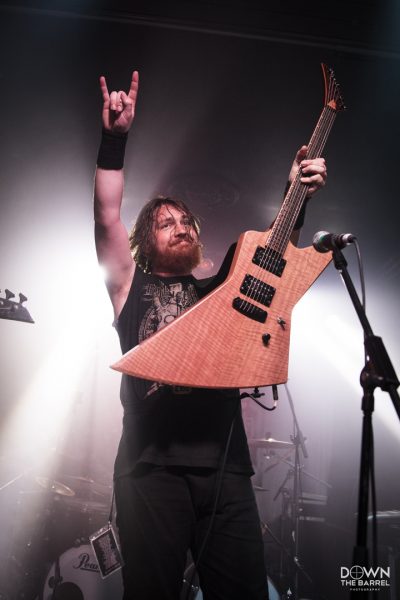 The Australian 4 piece rip open the Voodoo lounge early with a full-on thrash assault and the venue is already working itself into a frenzy. Harlott would be at home on a larger stage just as easily as a small one and I urge you to check them out at your first available chance. Lead guitarist Jake Weber and vocalist/guitarist Andrew Hudson shred the shit out of each opportunity in wave after wave of crucifying riffs and perfect poise.

Drummer Tim Joyce has the helm of keeping the beat going in complete sync and bassist Tom Richards is going to snap his neck pretty soon if he’s not careful. Nobody can windmill that hard and not do damage (except maybe George “Corpsegrinder” Fisher).

For an opening band, they’ve kicked the hornet’s nest wide open and everyone here is seriously getting behind them. This is gonna be a good night.  4/5
Cephalic Carnage from Colorado are next and blow the fuses completely. Sporting brutal death-grind from across the pond, CC get right down to business and take no hostages. Opening the bowels of hell from the word “go”, they drop the tuning and drop the tone for their brutally heavy show. 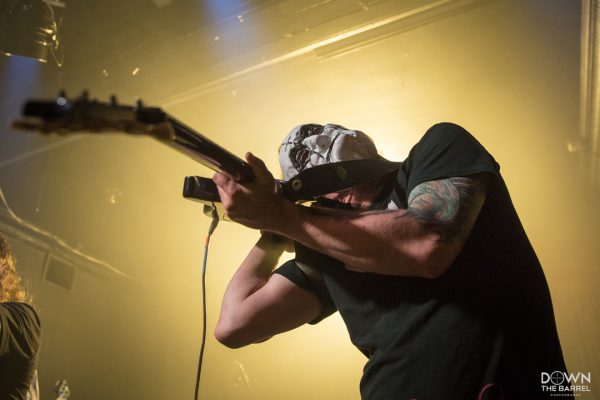 Embodying something close to Chris Barnes front Six Feet Under, lead singer Lenzig Leal has a guttural voice that is sickeningly deep. It’s one of the heaviest I’ve heard on a small stage level, and when he speaks, he is actually quite cheerful.

The backbone of the band is drummer John Merryman who is in top form holding the timing and beats perfectly and is not given nearly enough credit for his gargantuan work ethic. They have an affinity for singing about weed, and after their offering of “Kill for Weed” is violent proof of this fact (being frank, it seems that most of their songs revolve around this topic).

There is a short instrumental flamenco act, where the jubilant Leal bounces across the stage air-guitaring in mimicry but then it’s back to the throat rumbling, immediately starting a defiantly funny song entitled “Snack Metal”, where the band dons painted masks, leather spike gauntlets and a horse mask.

By and large, Cephalic Carnage is a fantastically tight band, and it’s just a liiiiiiittle bit too heavy for my liking. But this isn’t about one band, it’s about one night of music and that band comprises masters of their craft where they call the shots. If anyone else doesn’t like it, tough shit buddy! 3/5 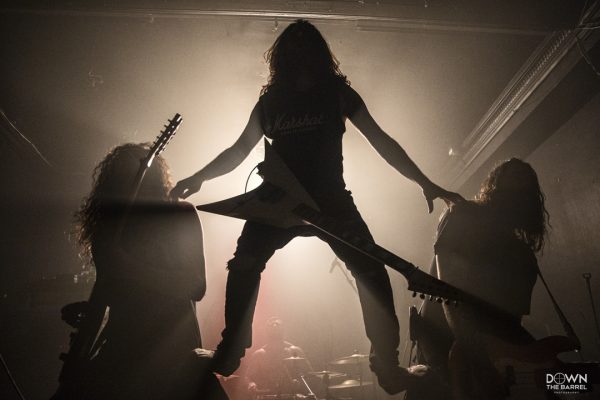 Fresh out of Washington DC, Darkest Hour is a no-holds-barred, 5-piece melodic death metal masterpiece. As the band kick into ultra-high gear, the mood takes a more vibrant turn after the brutally heavy setlist by Cephalic Carnage.

There’s a hell of a lot more movement from DH and by the crowd. They last played here 14 years ago in Dublin and apologised for the delay in their return. Emotionally and enthusiastically animated and involved in the movement of their setlist, frontman John Henry explodes into full beast mode and rouses the audience into another headbanging frenzy. 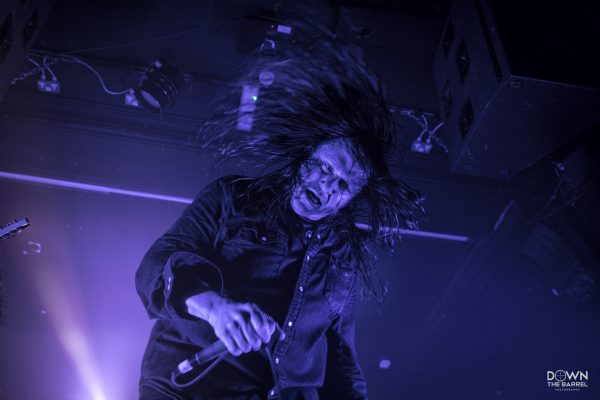 Both guitar channels (manned by Mike Carrigan and Mike Schleibaum), are amazing in their delivery and I may have found a new favourite band as a result. Their hot riffs meld together gracefully, and an octave harmony system is in place that dazzles as the band progress through their setlist. Cue an amazing cover of Napalm Death’s “Nazi Punks, Fuck Off”!

Of course, a circle pit opens up for this and the bodies start to fly (there’s one guy in particular that makes a habit of stage-diving and I’m waiting to see if he messes it up, but thankfully he keeps steady and gets to enjoy his night without much disruption).

Darkest Hour’s sheer originality in an already heavily-saturated genre is a mark of brilliance, and I hope I don’t have to wait 14 years to see them here again 4/5

So now it’s time for the main event! Havok have returned to wreak…err… havoc on Dublin one more time. The last show they played here was in the Pint venue in 2015. Havok were also one of the most talked-about bands at the Bloodstock Open Air Festival last year, and by all accounts, that gig went down an absolute treat. But that’s a while ago, and we’re here tonight to get our faces melted. 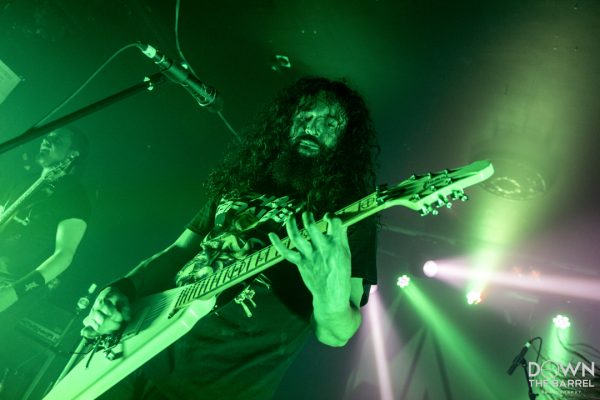 “THIS AIN’T A DUBSTEP SHOW! THIS IS A FUCKIN DUBLIN SHOW!!!”, screams frontman David Sanchez, and Havok smash their way through the first 3 songs with a serious fire in their bellies and proceed to run rings around the rest of the bands here tonight.

The pace is at lightspeed and each note is perfectly executed. Lead guitarist Reece Scruggs and bass player Nick Schendzieloz are jumping around the stage like men possessed, and are the extra ammunition that Havok have at their disposal.

Both men are superbly suited to their chosen instrument, and this is obvious in their playing styles. Drummer Pete Webber is also on fire, and together the band lives up to its name. Their unrivalled flair for fast-paced licks makes Havok stand out amongst many other thrash metal bands. 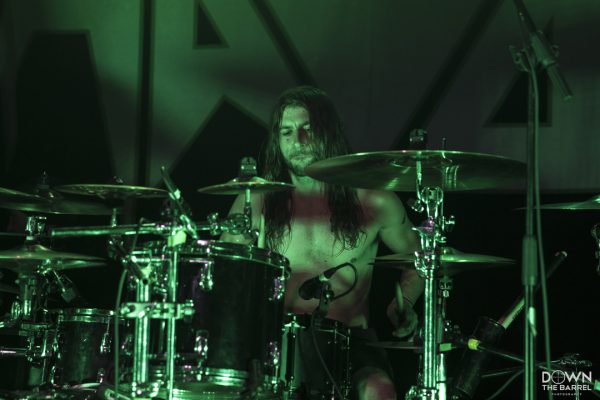 Some of their songs sound like the start of a thunderstorm and do about the same amount of damage. ‘Stagediving Guy’ is having the time of his life repeatedly leaping unapologetically into the arms of the waving crowd. A few others try the same pace, but give up eventually. Sanchez reads all of this and refers to it in his stage addresses. 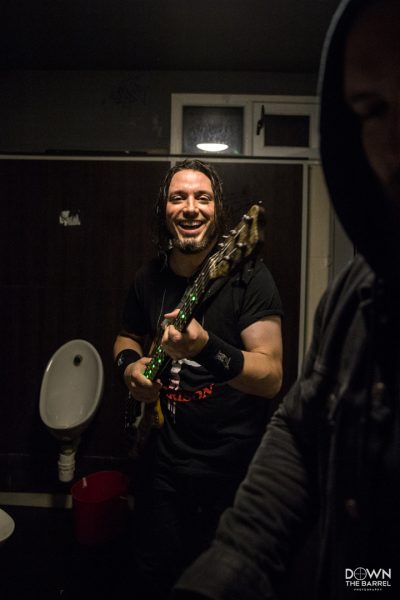 Thankfully the talk is kept to a minimum and the music to a maximum. Sanchez’ raspy voice carries the fury of the band’s signature sound perfectly, and everyone is just having a good time. The pit action is getting serious, as there are bodies flying all over the venue. It’s one of the bigger moshpits that I’ve seen in the Voodoo Lounge and the smiles on the punter’s faces are enviable. The craic is also on the stage, and Schendzieloz asks “How long will it take to get the craic up to 90”? (That’s an Irish joke, for our non-Irish readers), and the crowd erupts in a unified cheer of approval.

Things take a virtuoso turn, when Schendzieloz, in the middle of a song, leaves the stage (still playing), and casually asks where the gents toilet is. So off he goes (still playing). There is a flurry of laughter as everyone knows what he’s at and the music continues as if he’s still on the stage. He returns to the stage area (still playing), with a smile on his face, and without having missed a single note.

By the time the encores arrive, Sanchez asks “How much can you guys “Oi?” It’s a rhetorical question, as he then belts into a thrash metal cover of “TNT” by the immortal AC/DC, and again the pit explodes, amidst deafening “Oi! Oi! Oi!” coming from both the stage and the audience. Two more songs slap us around the head,  and the band call it a night. The curfew was 11 pm, but Havok kept the fire going until 11.20pm!

When the dust settles, the band takes their sweet time getting their gear and take the opportunity to meet and greet fans, sign cd’s, pose for pictures and have a few chats. They also encourage some fans to have beers with them after the gig, but alas I won’t be joining them because duty calls at 9 am sharp. Havok really upped the ante for gigs in Dublin tonight, and I’m eager to see what can top this. 4.5/5

Get the full gallery from the show below, courtesy of Down The Barrel Photography © 2018