Ireland has had the most severe heat wave in living memory, and Dublin is baking in the midsummer furnace. With doors opening at 7 pm sharp the already sweat-drenched die-hards pour into Dublin’s Academy to welcome back Killswitch Engage, who are taking a quick time-out from their support of heavy metal deities Iron Maiden on their current European tour. 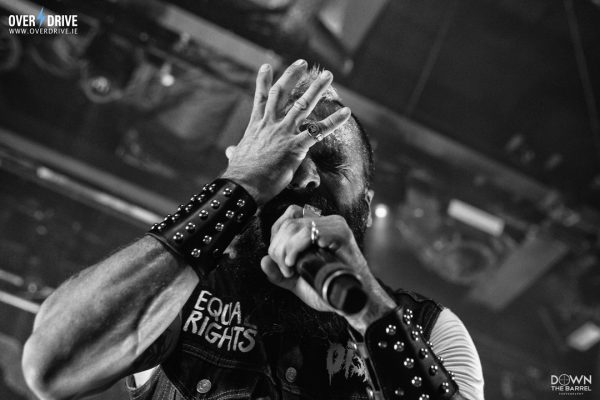 As the heat rises, so does the anticipation. At 7.55pm, the lights go down and the intro to support act The Raven Age kicks off. At the stroke of 8, the first notes are struck and the night is underway.

The sound from the relatively little-known melodic metal five-piece is thick and bassy and is quintessentially reinventing themselves one gig at a time with the introduction of the new singer Matt James (formerly the frontman for Wild Lies, who previously announced an indefinite hiatus back in January of this year).

The band is sharp and flawlessly punctual amidst their general breakdowns and rollercoaster song structures that form a shrewd arsenal of hard-hitting lyrics and superior rocking musicianship. 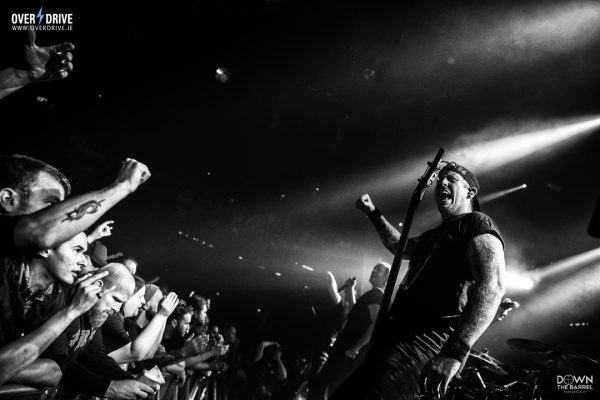 The chunky, crunchy riffs are catapulted at a slow enough speed, but they are constant and relentless. During one of their heavier songs “Salem’s Fate”, they have the audience illuminate the venue by mobile phone torchlight alone, but it doesn’t quite set the tone for the song to follow. It’s breakneck and riffy, but a bad choice of lighting arrangement
Drummer Jai Patel spins the sticks mid-breakdown and the headbanging effect on the audience is glorious.

Their latest single “Surrogate” ignites the more serious music fans in the venue, as does the follow-up “My Revenge”. There are also a few awesome harmonies between both guitarists Tony Maue and George Harris. Combined with the expert basswork of Matt Cox, this band are in their infancy of great things and is a snapshot of the resurgence in modern melodic metal. 3/5 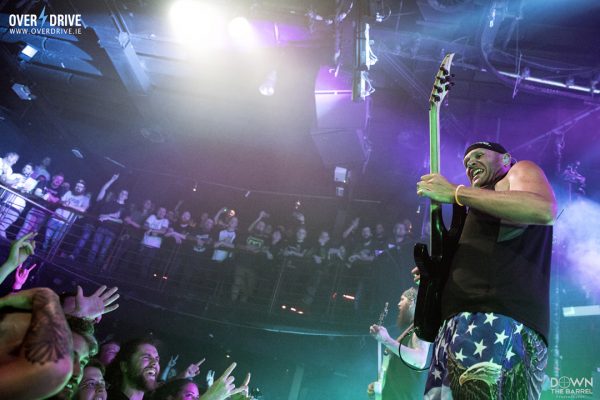 The thick, muggy atmosphere is dripping on the brow of everyone here, as we wait patiently for Killswitch Engage to start their much-anticipated show. Opening with what sounds like a crossover of “Fight for Your Right (To Party)”  by the Beastie Boys and an Acme props advert from a Disney cartoon, KsE stroll pleasantly onstage, waving politely, and pause for a second before violently dropping g the hammer on the Academy.

Starting with the standout track of their last album “Incarnate”, KsE put foot-to-ass in no time at all. Pumped with that notoriously-infectious energy, guitarist Adam Dutkiewicz jumps from one end of the stage to the next and ceaselessly continues for the duration of the show. Any time I have seen this band live, he does the same thing. He even did it after having knee surgery back in 2011; never one to disappoint the fans, he starts as he means to continue: like the fuckin’ Energizer Bunny. 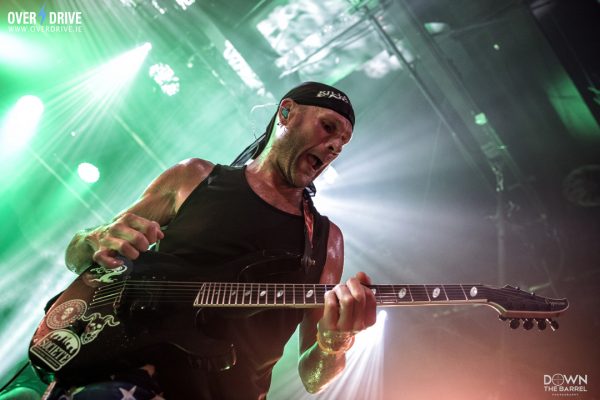 Frontman Jesse Leach thanks us all for attending on a night off from supporting Iron Maiden on a weekday gig (which he has described as a dream come true), and Dutkiewicz addresses the more maniacal contingent of the audience, asking if anyone wants to share their friends by removing their hairy balls from their pants.

The overall reception of the band by the audience is gargantuan. The screams don’t stop from the end of the show to the next, and the crowd action is ceaseless. Ever politically-driven in this uncertain climate, Leach dedicates “Hate By Design” to the “fucking moron who thinks he runs our country. Fuck Donald Trump!” The rapturous admonishment falls as expected until Dutkiewicz inserts a typically rebellious “I bet he’s got a fuckin’ tiny dick!” 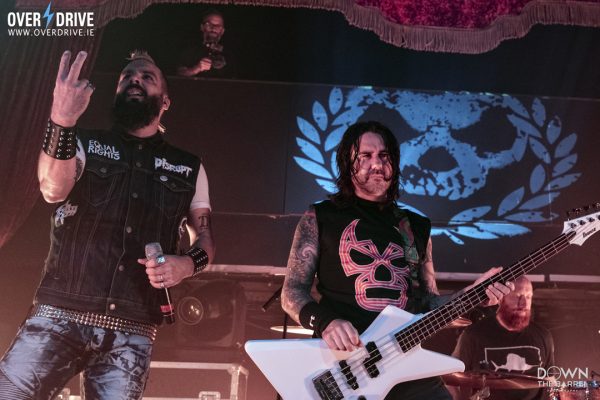 They slow it down a bit for “Always” and their own cameraman comes out to get the section from the audience for this rare ballad, but this mood is soon shattered by “My Last Serenade”. All band members take turns interacting with the audience as guitarist, as bassist Mike D’Antonio high fives them and gives the bunny ears to a security guard.

He is always front and centre to do just that at each show, letting fans know that they are a welcome part of the KsE family, and he doesn’t et them forget it. Drum magnate Justin Foley has the skins rattling under the strain of his gradually incremental drumming style as Leach gives the mic to some randomers to help with the lyrics.

There is notably more security at this gig, as the last time KsE were here, some punter s managed to get past the frontline staff in large numbers to take selfies with the band and leap from the stage. The guys are ready for that tonight though, and respectfully so. Security sometimes gets a bad rap, but they’re there to ensure everyone has a good time, not just the chancer who got lucky when backs were turned. It’s never a good idea to climb the stage in a show – just ask Randy Blythe from Lamb of God what he thinks of that. 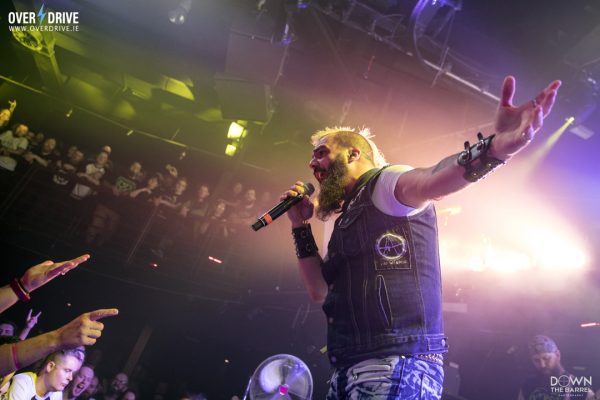 The final song of the night is a real surprise, as their cover of the immortal Ronnie James Dio’s timeless anthem “Holy Diver” gets delivered, and the devil horns are raised loud and proud. The band bids us farewell for the night – “Safe home, everybody!” orders Dutkiewicz, before bowing out gracefully with his compadres.

We’re not letting them get off that easily. Ireland has a habit of singing ‘Olé, Olé, Olé’ when we want a band to return, and that voice is deafening tonight. Amused by this overture of support, the band returns with no plan B. “We fuckin’ told you to go home!”, shouts Dutkiewicz in his mock-angry voice. “You’re all horrible sons and daughters! Your mom is worried about you! Who here is a bad son or daughter?!” The crowd goes nuts! “You should call her, and tell her I said Hi! She knows me! Jesse, what are we doing?” Leach just shrugs his shoulders because this wasn’t in the game plan. They belt out ‘Fixation on the Darkness’ to quench our appetites, and we let them knock off for the night. It was an outstanding show, and we’re counting the days until they come back again. 5/5

Down the Barrel Photography gallery, exclusively for www.overdrive.ie. All Rights Reserved.

Strength of the Mind

Encores
Fixation on the Darkness

Photo – Down The Barrel Photography, exclusively for Overdrive © 2018 . All Rights Reserved.