Overdrive applied the war paint and our worn out leathers to attend the screening of MAD MAX  – FURY ROAD and were treated to a berzerker car chase across a baron landscape by a bunch of freaks including a possible member of Slipknot swinging out of some elastic bands and whaling on a twin-neck, fire-breathing guitar! Step inside and check it out! 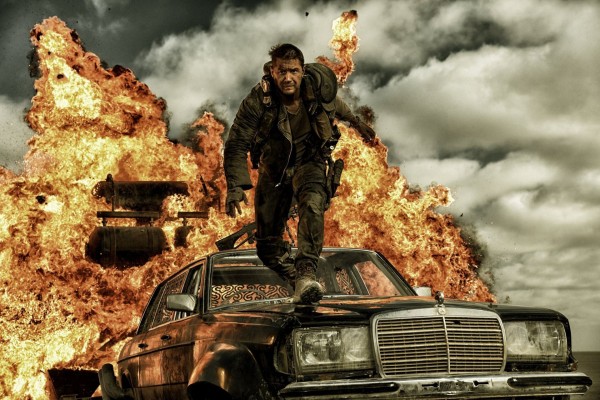 Mad Max: Fury Road is the fourth installment, albeit thirty years later, in George Miller’s epic action franchise. It’s set in a post nuclear war, barren wasteland. The few remaining resources are controlled by an evil overlord Immortan Joe played by Hugh Keays-Byrne who you may remember as the original nemesis of Max in the 1979 movie as “Toecutter”. Joe commands an army of “War Boys”; pasty, half-life soldiers who are more than happy to sacrifice their lives for their leader, fully convinced that he is their savior and will carry them all to Valhalla in the next life. He rules over the Citadel which contains the only water supply and as a result the only source of fresh food. Shackled in his industrial palace are a herd of “Milking Mothers” from whom he farms copious amounts of breast milk to feed his ever expanding family. Naturally such a dictator also has his pick of the spoils when it comes to wives or “Breeders” as he refers to them. Unfortunately for Joe, his most prized possessions have stowed away and this is where we meet the heroine of the piece. 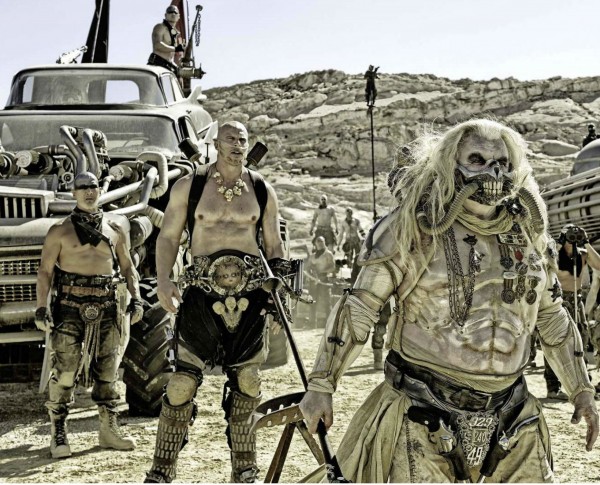 Imperator Furiosa (Charlize Theron) is a bad-ass higher up in Joe’s army who has earned the prestigious role of “War Rig” driver. She’s got the scars to prove it! Thankfully Furiosa is seeking redemption for her sins of service and is making a desperate attempt to smuggle the wives away to safety.

Our reluctant hero Max Rockatansky (Tom Hardy) is at odds with himself once again. He’s a man constantly on the run who seems to just want to be left alone. The problem is he just seems to bump into small armies and bus loads of damsels in distress at all the wrong times. His natural instinct is personal survival, but as flashbacks of his fallen wife and daughter plague him he is roused into cautious compassion towards Furiosa and her passengers. 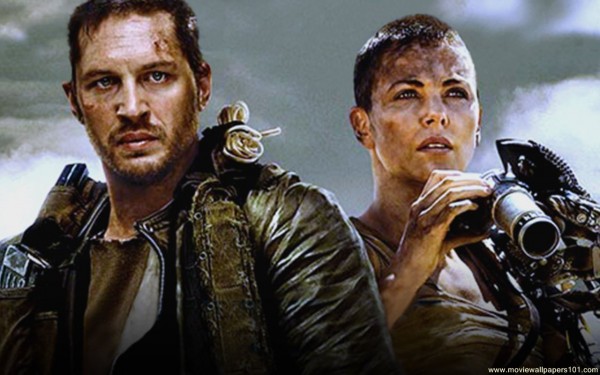 Make no mistake about it, if you’re walking into your local cinema expecting a slow psychological thriller with complex dialogue, you’re at the wrong movie. So much so that Hardy spends much of the film grunting and gesturing at his cohorts rather than actually speaking. Miller actually gave his primary characters an in depth “bible” prior to shooting. This was filled with background stories for their respective roles which they memorized in order to convey their personality traits through physical interaction and reactions rather than dialogue. The cast all perform outstandingly but special mention has to go Theron at her most desperate moments in the picture.

Visually this flick is about as stunningly grandiose as you’re likely to see this year. Miller’s strict adherence to classic effects and minimal use of CGI really make all the difference. The colours are spectacular, especially the signal flares. The vehicles are savagely sinister and the magnitude of their convoy has to be seen to be believed. This whole film just feels like it’s actually happening in front of you rather than on a computer screen and boy does it make for an exciting two hours. The action was practically non-stop!

The soundtrack to this chaotic tale is almost as impressive as the action. A giant bus come flatbed truck named “the Doofwagon” is adorned with ten foot high speakers and megaphones up front and humongous war drums on the back. Commanding this beast is the “War Boy” guitarist from hell. Think Tool meets Rammstein with a tribal beat in the background! 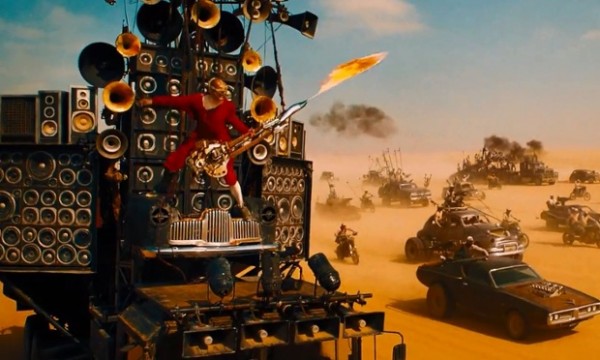 The refreshing thing about this blockbuster was that despite the barrage of action, it all made sense. Every scene served a purpose and the countless explosions only served to make the minute dialogue all the more poignant. Some have criticized Miller for allowing Furiosa equal footing with Max, brandishing it as a feminist protest piece. The fact of the matter is that in this world everyone under a dictatorship is equal. Misery, starvation and almost certain death sort of have that effect on a person. Furiosa is a battle hardened Road Warrior every bit as much as Max is and the War Boys are every bit as afflicted as the Wives are.

This is a remarkable piece of cinema, with superb performances all round. It’s reminiscent of the big blockbusters of the 80’s and 90’s but with the clarity and poise of a director who’s seen them all. It never loses focus and if it had one minor flaw it would be that the level of thrills throughout somewhat eclipse the finale of the movie. Thankfully this doesn’t seem to be the end for our trail-beaten Road Warrior as the next film in the franchise already has a title Mad Max: Wasteland. It’ll have it’s work cut out to top this tour de force though….