Kicking off 2019’s gig calendar with Mastodon, Kvelertak and Mutoid Man is not a bad way to start the year despite Brent Hinds being in one hell of a shitty mood tonight. 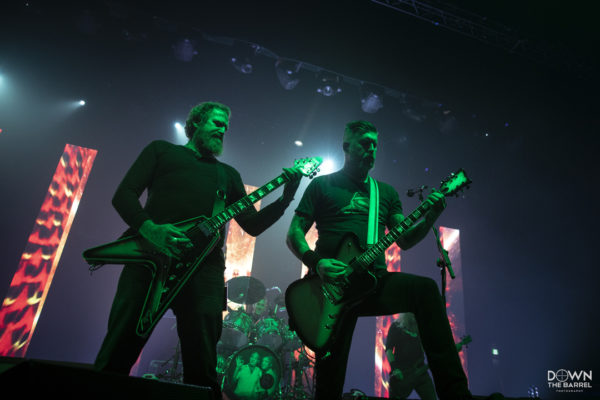 Announced late last year, Mastodon’s return to Ireland was received with open arms from the Irish Metal alliance and rightfully so as the Atlanta four-piece have the mighty Kvelertak and New York natives Mutoid Man as special guests.

Always an impressive setting for a show, the Olympia Theatre fills up nicely for Mutoid Man’s aural attack which is jam-packed full of garage-metal bursts of mathy precision, metallic hardcore, and classic-rock extravagance.

Mutoid Man consists of Cave In guitarist, Stephen Brodsky along with bassist Nick Cageao and what should have been Ben Koller (ex Converge) who had to sit out the tour due to breaking his elbow in December. As the saying goes: “The show must go on“, so filling in on the kit is Chris Maggio (ex Trap Them), who is a complete hurricane of hardcore brutality, which fits the manic chaos of tonight’s setlist perfectly. 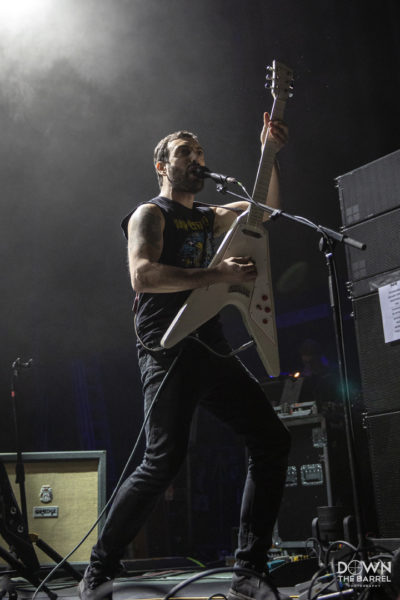 Almost like a gory, high-quality aural B-Movie, Mutoid Man launches into their performance with little fanfare giving us treats such as ‘Date with The Devil’, ‘Kiss of Death‘, and ‘Bridge Burner‘ from 2015’s ‘Bleeder‘ release.

Brodsky controls the chaos from the far right of the stage and punches the band’s setlist down the venues throat whether they like it or not. Most enjoyable indeed! 3.5/5

Having only played Ireland once back in 2010 when they opened for Converge (Kylessa was also on the bill) in Whelans Venue, which was a sweaty magnificent July evening, Kvelertak have since developed a highly respectable name for themselves thanks to their impressive back catalogue (Self-Titled 2010, ‘Meir‘ 2013 and ‘Nattesferd‘ 2016).

Their 2017 run of arena dates with Metallica saw them venture back underground to concentrate on their next studio adventure, however original vocalist Erlend Hjelvik’s sudden decision to leave the band last Summer saw new frontman Ivar Nikolaisen take the helm and with only a handful of live dates for Kvelertak under his belt, tonight’s show was more of an introduction to Nikolaisen’s personal touch to the already established live shows.

As always the band open up with the infectious ‘Åpenbaring‘ which explodes from the theatres P.A, much to the delight of the punters who know exactly the damage Kvelertak can do live.

With the vocals a tad muddy to start with, the mix becomes slightly more defined during ‘Bruane Brenn‘ and the band settle into their environment with their sonic attack in full mode thanks to Bjarte Lund Rolland, Maciek Ofstad, Vidar Landa’s snarling six-string assault. 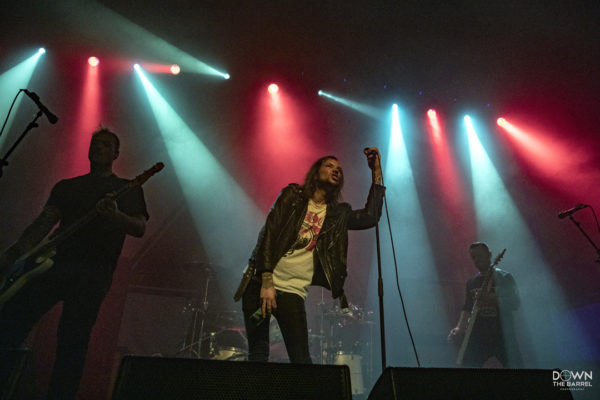 One of the things I love about Kvelertak is their ability to smash together a hybrid of styles from Classic Rock/Metal and Punk to scorched Black Metal and make it work tremendously well.

Tonight we don’t get any new material as they are still working on a follow up to ‘Nattesferd‘ which you can find out all about in a feature interview we conducted with Vidar and bassist Marvin Nygaard before the show which will be coming soon.

This evening’s performance was all about Ivar and his ability to fill Erlend’s shoes, which in its own right, is a big ask. My overall impression is one that I’ve been debating since the show on Tuesday. All the boxes were ticked with regards to what we have come to know as Kvelertak live, but there seemed to be something missing. It’s hard to pinpoint exactly as it was only the second show of the tour. Ivar’s presence is confident and engaging, but at times came across a little sloppy, bedraggled, and slightly porous. Hopefully, this was just down to the fact that he’s finding his feet and will settle into the live dates with ease. 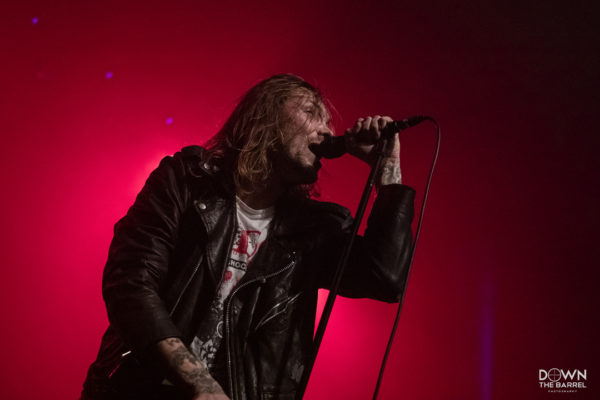 By no means did Kvelertak fail to impress as they handed out a bone-cracking setlist with gems such as ‘Nekroscop‘, ‘1985‘, ‘Fossegrim‘ and ‘Blodtørst‘ among others, finishing on their brain-hacking self-titled anthem, ‘Kvelertak‘, which saw Ivar command the audience from the lip of the Olympia’s stage waving the enormous Kevelertak flag over the front row. I look forward to seeing them again in the near future with some new material at a headlining show. 3.5/5 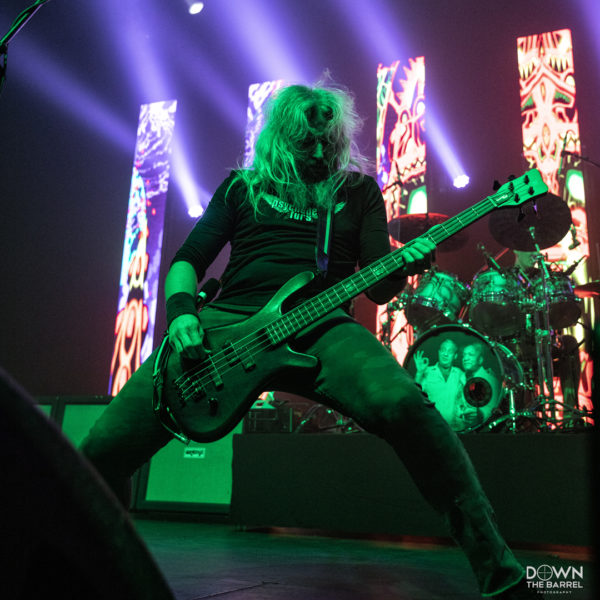 And so, on to Mastodon. Taking to the stage with Gene Kelly’s Singin’ In The Rain as the entrance music, a smiling Brent Hinds holds his Flying V aloft, while Brann Dailer settles himself behind his glorious custom kit while bassist Troy Sanders and guitarist Bill Kelliher ready themselves before they launch into ‘Iron Tusk‘, followed swiftly by ‘March of the Fire Ants‘, much to the delight from tonights sold out attendees.

Having seen Mastodon many, many times it’s always a pleasure to witness their precision and musicianship which at times is simply breathtaking, to say the least. Spralling prog complexities find their way into the atmosphere with ‘Mother Puncher‘ and the mesmerising ‘Chimes at Midnight‘ which are delivered with visceral intensity wrapped in crystal clear mix (kudos to the FOH for a killer job).

A compilation of sonic cuts from their flawless discography is delivered with ‘Steambreather‘, ‘Toe to Toes‘, ‘Sleeping Giant‘, ‘Precious Stones‘, ‘Ghost of Karelia‘ and ‘Capillarian Crest‘ from 2006’s stunning ‘Blood Mountain‘. 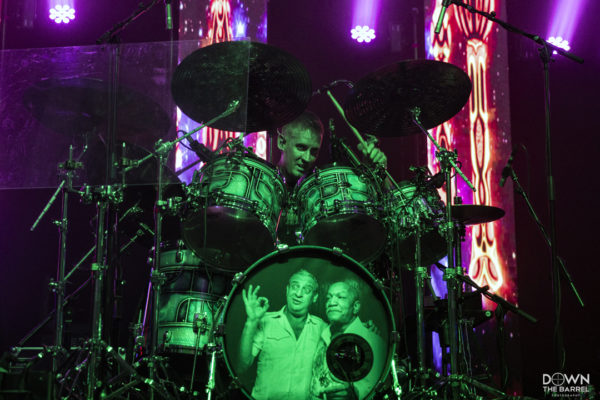 So, all is going well until we get to about halfway through the set and Brent seems to be unhappy about something. The physical distance between the rest of the band and Hinds from this point is noticeable for the remainder of the show, almost as if there was an invisible moat separating them. 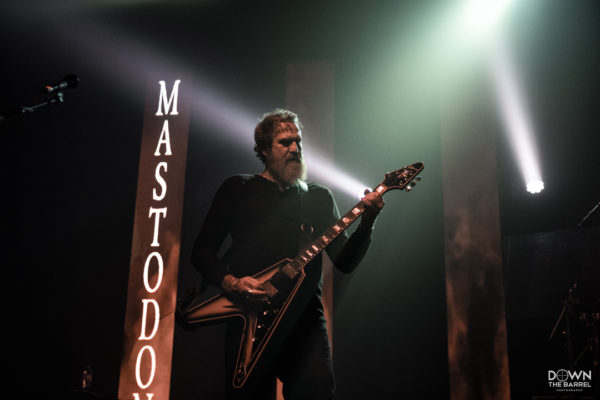 A thunderous roar from the audience greeted Scott Kelly (Neurosis) to the stage before launching into seven absolute blistering performances of ‘Scorpion Breath‘, ‘Crystal Skull‘, ‘Specterlight’, ‘Aqua Dementia‘, ‘Crack The Sky‘, ‘Diamond in the Witch House‘ and the crushing, ‘Blood and Thunder‘. For that alone, the ticket price was justified.

Kelly’s vocals are a force to be reckoned with as he empties his lungs with all his might over the perfectly executed backing track provided by the rest of the band. Tremendous stuff.

Unfortunately, we don’t get an encore tonight, but instead, Dailer’s one-man mini-speech on his Irish ancestry after his failed attempts to coax a now super pissed off Brent Hinds back from the wings of the stage for a resounding “Happy Birthday” rendition from the audience.

He wasn’t having any of it and stormed off into the darkness of the backstage production area. Whatever happened to Hinds over the last hour or so, I guess we’ll never know, but all in all, Mastodon tonight proved that they can truly dominate with outstanding veracity when it suits them. 4/5

Photo Gallery by Down The Barrel Photography, courtesy of MCD Productions © 2019

Photos – Down The Barrel Photography, courtesy of MCD Productions © 2019