Bloodstock Festival’s annual Metal 2 The Masses campaign kicks off in Dublin with an almighty bang! 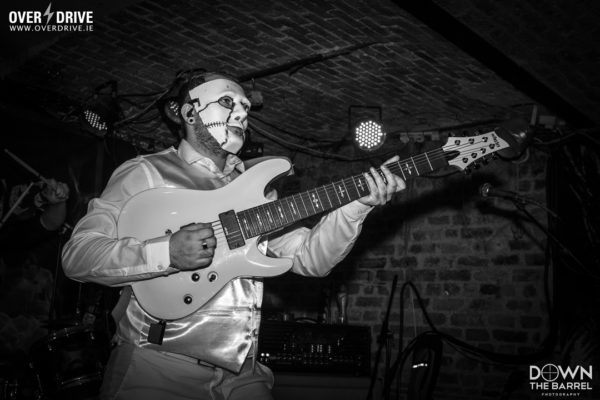 So here we are again in 2019. This is the 6th year in a row that Overdrive.ie, in association with Jetrocker, and Bloodstock Open Air UK, has been in the driving seat for the Irish chapter of Metal 2 The Masses to help one lucky Irish unsigned metal band the opportunity to appear on the Hobgoblin New Blood Stage at the Bloodstock Open Air festival in Catton Hall in August.

Thirty-six bands have returned (some new, some not so new), in order to see who has the moxie, the stubbornness, and the determination to be crowned the winner at the M2TM Grand Final on May 18th.

Please make sure your tray is locked and your seat is in an upright position. Please ensure all personal belongings are safely stowed away, and when prompted, assume the crash position: this is gonna be a bumpy landing. 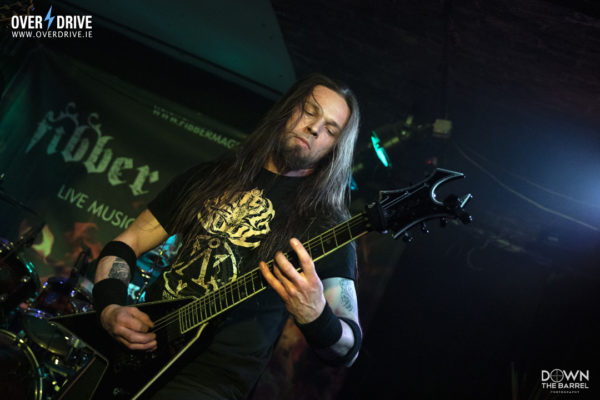 First up to hit the stage is Kilkenny/Portlaoise/European outfit My Soul Divine. Fresh from an 8-year hiatus with a brand new drummer and a brand new bass player, they hit the road at full speed.

The lads are fresh on their feet as this is also their first gig after getting back together. Composed of Martin Menes Molenda on vocals and guitar, lead guitarist Greg Zielinski, Paul Budzynski on drums and Paul Piszewski on bass, it seemed as like they had never left the stage.

Kicking off M2TM 2019 with ‘Heaven or Hell’, Molenda wakes us up after a drought of almost 8 months (where This Place Hell were the winners of the 2018 Grand Final on May 12th), with a guttural roar to shake the cobwebs off. His lead counterpart Zielinski whips the head around mid-shred, fuelling those doom and death metal assaults at a steadfast pace.

Bassist Piszewski also has his hands full with those backing bass lines supplying a secondary subtle melody that lies perfectly with the vocals and guitar parts, firmly propped up by the hard-working Budzynski on drums. 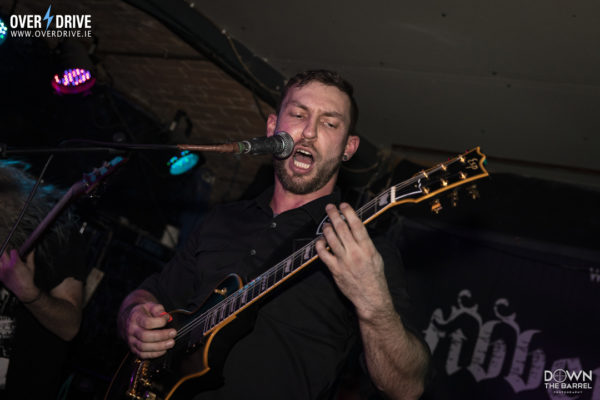 Both Molenda and Zielinski take turns to rip the fretboard on songs like ‘Blinded By Light’, and ‘Skies Fell Silent’. They have hints of Scandinavian death metal in their verses; that unmistakeable double-time snare drum snapping action at 100mph, and double bass pedal work from Budzynski that never lets up.

Coupled with Molenda’s seemingly never-ending lung capacity, it’s a healthy dose of rotting, filthy metal that has us reminded of what this competition is all about… and this is the first band of the first heat on the first night. 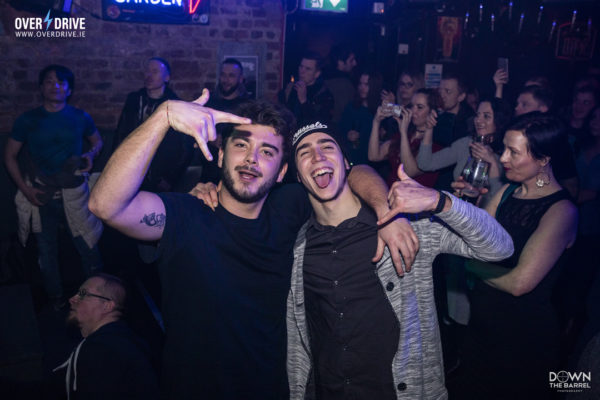 Following that rock-solid opener, we have New Age Messiah from Limerick. Their Big-4 thrash-saturated overtones dominate the stage and the band is well and truly lit up to be here. The bar is kicked up a notch in terms of sound, interaction, and ferocity, owing to frontman Darragh Byrne’s towering and imposing presence behind the mic.

The work that has been put into this setlist is gargantuan because it’s their first gig in Dublin and their eyes are set on the prize from the very start. The lads seem to have hit the nail on the head here with the ease that they deliver that setlist. It’s also worth pointing out that they are also playing the Siege of Limerick and the Urban Assault festival in Cork later this year. 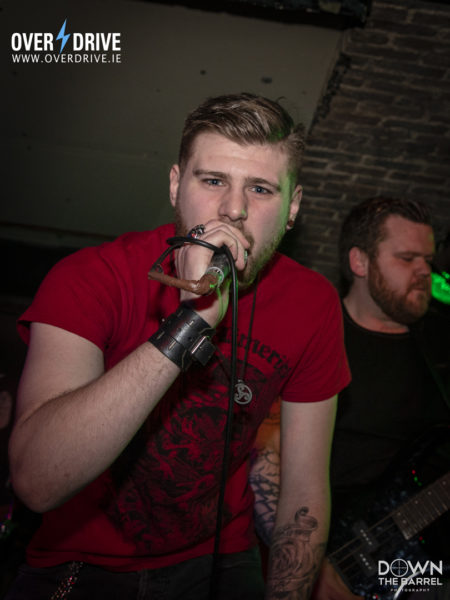 You don’t get to do those gigs if you’re not on your game. Drummer Glenn Judge is rampaging through his drumskins (note: during the soundcheck, I thought they would break), and his energy is enviable. Twin-channel axemen Aaron “Smokie” O’Neill and Reece Lowe take turns kicking the earholes with the six-strings stinging the atmosphere with highly-refined riff work and partnering fills and melodies working very well together.

Bass player Ger O’Riordan works his magic (and looks like he’ll take your head off), getting down and dirty to be the somewhat ‘focus’ of aggression from the stage. There is a serious ‘fuck you’ attitude from their songs (adding to the aggression and nonchalant disregard for the hearing ability of their audience), in the songs ‘Burn’, ‘Bow Down’, and ‘Black Skies’. The brutal breakdowns of the verse and chorus segments are again another nod to the point of view of the band, which in this day and age, is an ingredient lacking in society at the moment.

Dublin quintet Black Tree shakes the boards loose with their hard rock/groove metal mix. Owing to the nature of their song structure, it helps that the singer Dave Walsh seems to be a tad off his rocker. It helps to get the crowd going, but judging by the number of people that have turned out to see this band, that’s not really a problem. 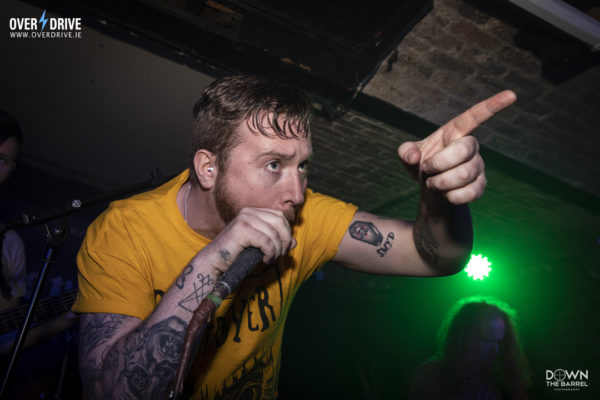 Guitarists Adam Kelleher and Domo Smith are tearing it up in a riff-pit that sounds like Clutch and the Deftones in a tag-team match with Black Sabbath and Soundgarden. It’s quite impossible to nail down who their influences are because according to Walsh: “It’s a mix of grindcore, grunge, Guns n’ Roses, and 90’s hard rock”. If that’s not an eclectic mix, then I don’t know what is.

One point of admiration must go in the direction of Smith, who has a playing style that is worthy of comparison to the rock titan Saul Hudson (aka Slash). His triplet and arpeggio playing style combined with 12-bar blues scale solos are seriously impressive and sit well on the shoulders of the work that the band has put in tonight. 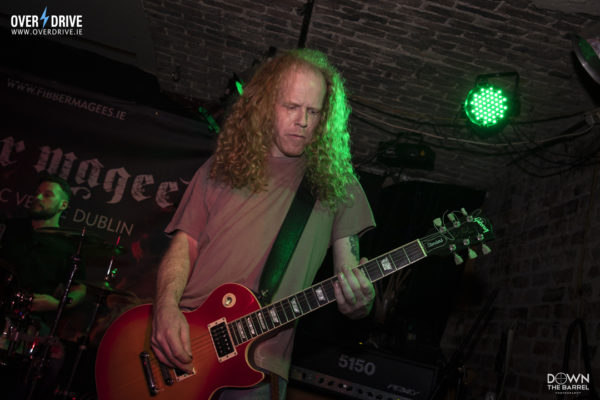 That said, their style is impossible to nail down. The setlist is a mix mash of all genres mentioned, and the lyrics are grabby, sharp and venomous. ‘Canal Bank Crawl’, ‘Seeper’, and their final song ‘Coiled’, really do get the blood pumping (not out of any wounds, mind you, which is surprising because the pit has opened up here and it’s messy).

But overall, Black Tree have stormed the venue, and challenges from the audience for an extra song are met with “challenge accepted” (unfortunately one band, Twisted Autocracy had to pull out due to one member having the flu), and the bands make up the extra time by belting out another few tunes when leaves the crowd wrecked. 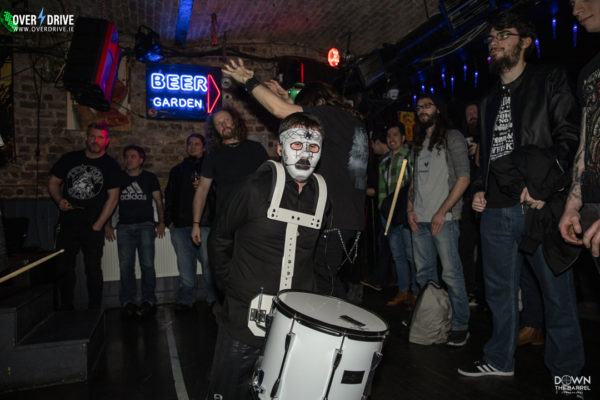 Finally, The Virgin Converters are the last to ply their trade here at Fibbers, on the very full and lively night that has already thrown a few wobblers. Luke Butterfly mans the frontman gun, as his unnamed partners in crime on bass and drums add to the madness that is a Virgin Converters show after a pretty fast soundcheck, the carnival-metal trio launch into their ‘Night of the Virgin’ into, and crack on with ‘The Murder Hotline’, from their EP of the same name.

Sporting a formal wear ensemble, they are the epitome of brash, in-your-face, oddball stagemanship, not a million miles away from Sweden’s shock metal group Avatar. Since you can’t see any facial expressions due to all of the band members wearing masks, you can’t tell what effect the music is having on them (but tell that to Slipknot!).  The penultimate mood swinging “Toxic Psychology” is aimed at those who care for the environment. 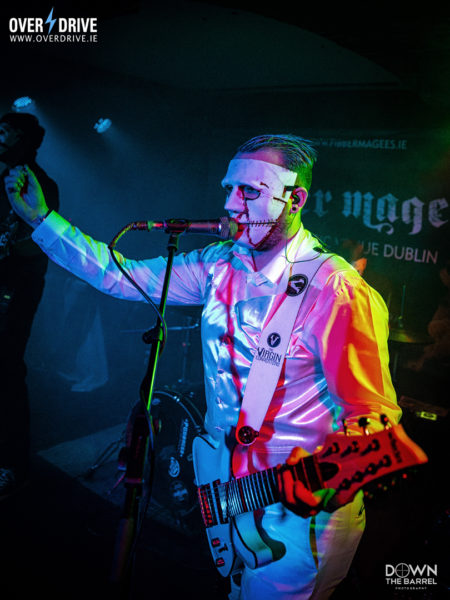 Now, I don’t know what the link between the environment and psychology is, but I assume it’s a macabre attempt at describing personal points of view being altered by madness-inducing know-it-alls spouting X, Y and Z about Christ knows what.

If that’s not the case, then it’s pure insanity mixed together with screeching vocals, brutally down-tuned guitars, and double bass pedal work that could shake your teeth loose. VC originally started out as a duo, and the added a new member to their flock, one who can play bass and drums. This is apparent when the drummer gets off the stage adorned in a shoulder-brace for a drum, a-la Slipknots ‘Psychosocial’ video. Banging it rhythmically, the atmosphere turns on its head as we are greeted with a funky disco number to play us out of the evening. To say it was weird is an understatement.

Black Tree come away with the crowd vote, with My Soul Divine landing the judge’s vote.  The Virgin Converters land the Wild Card vote, and a chance to run the gauntlet again. This has proven to be quite the opening night, and if the pace of the competition is as fast and furious as tonight, then we are in for one hell of a ride.

Metal 2 The Masses Heat 2 will take place on Saturday, February 2nd with performances from BRIKK, GREY STAG, PEASANT TO A KING, SECTILE, TRENCHKNIFE and a very special headline performance from DEAD LABEL which will be the bands’ debut as a four-piece. For details to the official event link, please click the graphic below; 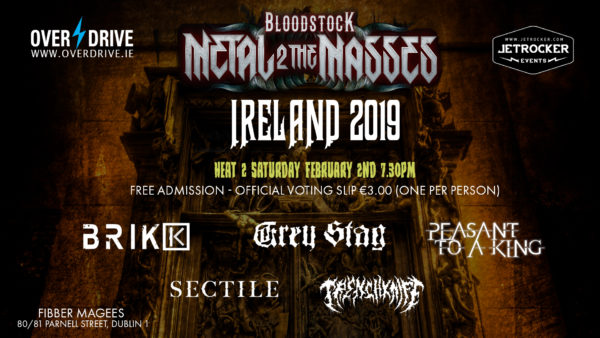 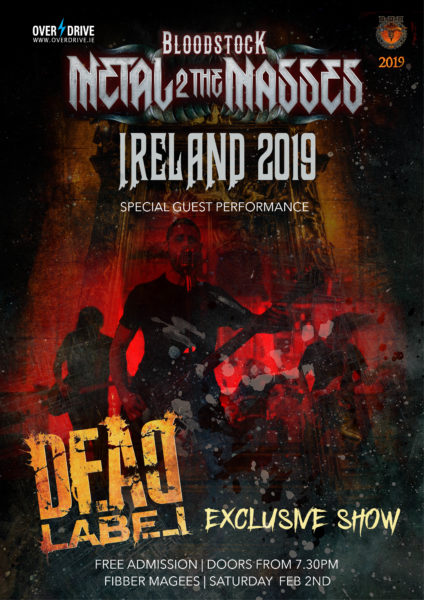