The Academy is full of the exuberance of long-waiting fans for a band that has never played Ireland before. 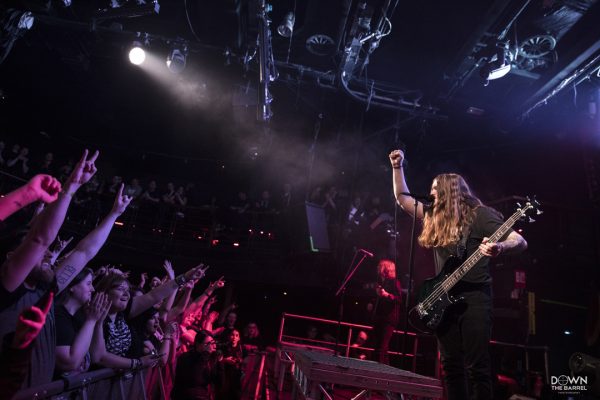 Orange County metalcore quartet Of Mice and Men are making their Irish debut and have brought some surprising newcomers along for the ride. Overdrive sent Shaun Martin to see what happened.

Approaching the stage in an unassuming and humble state, Sylar takes to the Academy like a duck to water. Their first song catches you off-guard and drops the beat at the first opportunity. Metalcore infused with a nu-metal twist, the NYC residents are down to earth and respectful of the crowd that has turned up for their very first Irish show.

Tributes to bands like Korn, Killswitch Engage and Limp Bizkit pepper their song structure and form, but still maintain the fresh originality of turn-of-the-century emo and nu-metal, reaching out to that un-tameable fire that is teenage angst. Their 3rd song “Dark Days” get rowdy and the floor erupts in a whirl of spinning bodies and flailing limbs.

This pace continues throughout the 30-minute setlist and the audience love it. “Pleasure Paradise” casts a wide net over the whole venue and ignites the audience in a unified front of moshing and slamming on the dance floor of the Academy. A smashing opener from the New Yorkers and a taste of the night ahead 3.5/5

Wasting zero time between band changes, Wage War brings the fight to Dublin, kicking the door down in spectacular form. Wage War starts the setlist with “Alive“, and frontman Briton Bond succeeds in bringing the audience even more alive on the floor (I didn’t think that was possible after Sylar’s breathtaking opening setlist).

The screaming audience is pumped and eagerly move through the motions of pit action and headbanging. It’s certainly lively enough as the audience doesn’t stop moving from the start to the end of the performance. Their track list is quite varied, between tracks from their first record “BluePrints”, and their latest, “Deadweight“.

Admittedly, Bond states that most of the setlist comprises tracks from the latter record, but they’re going down an absolute storm. WW follow swiftly with more songs from that record like “Don’t let me fade away“. The band has also never played Ireland before and mentions this more than once. It seems this is s a new venture for all of the bands tonight and the first impression is one that pleases everyone here.

Wage War is a seriously heavy band with a large following, but some of their songs sound a bit familiar to each other. As it is a niche area, I guess that’s inevitable, but it’s not stopping the fans here tonight who are only too happy to lose their shit in the repeated circle pits and crowd-surfing. Wage War are another top band for tonight’s selection and the audience absolutely love them. 3/5

So, we’ve come to the main band tonight, and I have to be clear: the fans are going absolutely apeshit waiting for the band to start, The first thing that hits you with Of Mice and Men is the impressive light show. Sitting behind an illuminated drumkit, OM&M drummer David Valentino Arteaga appears first, which fans the flames of excitement (many of whom may be attending a gig for the very first time).

As the rest of the band appear to a rapturous reception, frontman Aaron Pauley welcomes everyone to the “Defy” tour. This is also the first time that OM&M have played Ireland, completing the hat trick of the three bands tonight playing their first Irish show. OM&M are bringing the fire tonight and they have clearly done their homework as regards their setlist.

“Warzone” holds the attendees of the Academy by the throat and don’t let it go. The atmosphere is alive with electricity and the feeling of excitement is very palpable. OM&M have garnered a heavy following since their first release “Of Mice and Men” back in 2010 and are glad to bring the aggressive down-tuned lunacy to Ireland for the first time. Pauley has a ferociously deep death growl that he employs throughout songs like “Exposed” and “Sick”, whilst simultaneously manning the bass guitar post. 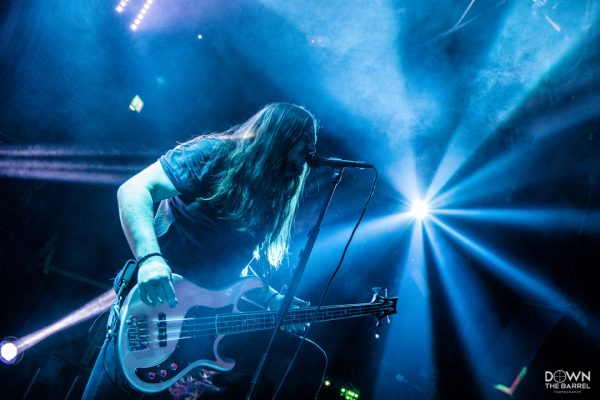 Lead guitarist Phil Manansala has a seriously cool and original playing style that sets him apart from the other shredders of other bands in this genre, and that makes him enviably potent. His axeman counterpart Alan Ashby is also in flying form, as the smile never leaves his face for one moment. Ashby takes the clean vocal channel on occasion, and the mix of clean and harsh vocals compliment the band’s aggressive playing style. On the drums, we have Arteaga, who knows how to get a reaction from the audience, as he riles the fans up in the “Exposed” intro. 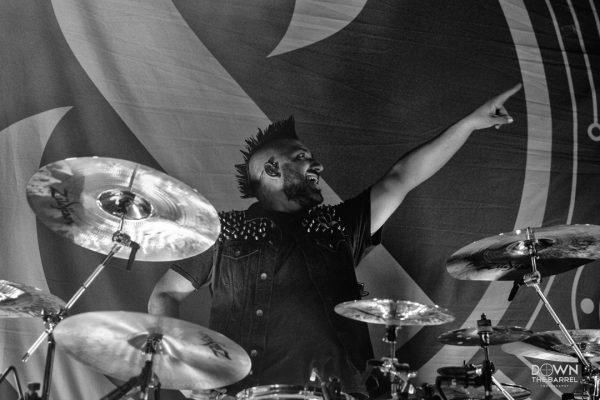 The strobe lighting amplifies the mood and adds fuel to the furnace. This in turn is picked up by the audience and the band recycles this energy to give it back tenfold to them.

The younger fan element is out in force tonight and it’s reassuring to see the next generation of metalheads get together in droves to support metal as it makes its way across the world. Ireland has a unique position, in that it gets a lot of the start of European tours, or the end of them, and OM&M have one more show on this leg of the “Defy” tour. 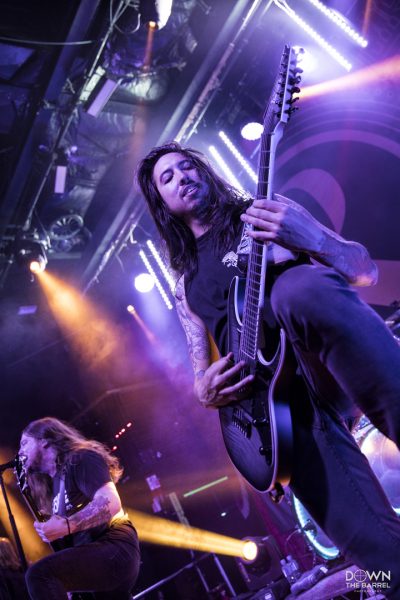 OM&M play a relatively short set (because it’s a Sunday night, I guess), and there’s a lot of younger people here tonight, so, I suppose school and college will be the demand in the morning. But far be it from Pauley to dismiss this, as he repeatedly thanks the crowd for coming out time and time again.

OM&M close out their night with the title track of their second record “The Flood”, and the lights go dark. Almost instantly, the crowd shout for one more tune and the band lets it go on for a little longer than expected, but they return nonetheless. Again, the ever-amiable Pauley thanks everyone for coming out, after finishing off with “Depths”, and Of Mice and Men leave not as mice, not as men, but as giants. 4/5

Would You Still Be Here

You Make Me Sick

OF MICE AND MEN – DUBLIN ACADEMY, IRELAND – © DOWN THE BARREL PHOTOGRAPHY 2018