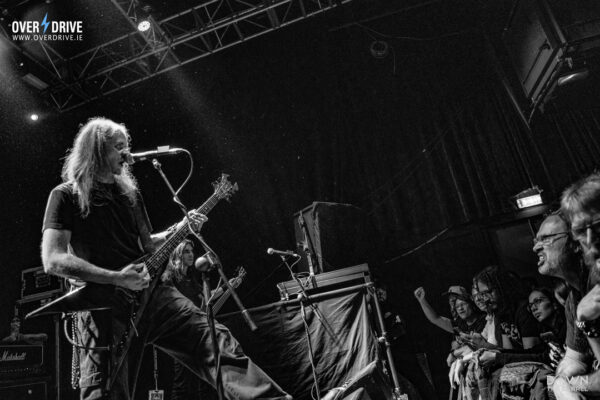 Photo- Down The Barrel Photography for www.overdrive.ie © 2022

Getting to carry out their tour for 2019’s release ‘Vile Nilotic Rites’, the Egyptology and Lovecraft influenced technical death metallers return to Dublin after nine long years, their last show in 2013 also coincidentally being in tonights venue, The Button Factory.

With a decently filled floor, London’s Decrepid provide a soundtrack of groovy and at times melodic death metal riffs. The barrier is filled from left to right with no gaps to squeeze in between, with vocalist Cris Bassan throwing out fist bumps to those who are holding position at the barrier for the night ahead.

It’s a full room already by the time Krisiun hit the stage. Hailing from Brazil, brother’s Alex (Camargo, bass and vocals), Moyses (Kolesne, guitar), and Max (Kolesne, drums) collect a large amount of dedicated ex-pat metalheads to the show, as members say something in Portuguese addressed to their proud followers which results in a huge eruption of back and forth yelling in the native tongue. 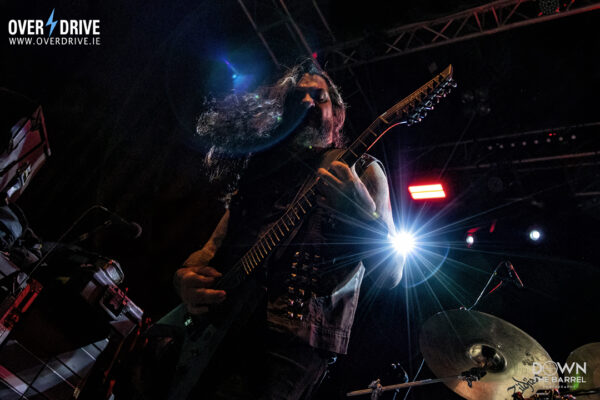 Photo- Down The Barrel Photography for www.overdrive.ie © 2022

A crisp sound leads the night into the bands tight and heavy death metal sound, with many headbangers in the crowd being polite to those beside them by staying in their own bubble, until ‘Vengeance Revelation‘ breaks the audience into a gigantic brutal mosh pit. Vocalist Alex holds a bottle of beer up to the crowd, and between chugs proclaims one chug is for good luck, and the other is for the road before wrapping up their set with ‘Hatred Inherit‘.

“Time for history class!”, someone in the crowd yells as the lights dim and the room is filled with a sinister sounding, drum heavy, ancient Egyptian themed instrumental intro. Drummer George Kollias casually enters the stage first, which causes a mild confusing anti-climax as many people think it may be a drum tech, until other members follow and the excited cheers from the crowd begins. A prompt and gigantic burst into the opening riffs of Sacrifice Unto Sebek feeds off the audience until a goosebump inducing explosion of the bands insanely technical riffs follows.

Taking over the duties of guitar and vocals for this tour is Nevalra and Thy Antichrist’s Scott Eames, who performs a brain melting duality of guttural growls and shrieks alongside band mastermind Karl Sanders (guitars, vocals) and bass player for this tour Julian Guillen (Nile member, Brian Kingsland decided to sit out this tour to welcome his newborn son into the world).

There is something absolutely hilarious about gig goers yelling along to Nile’s Egyptian vocals in the best phonetic attempt possible, while by contrast something mind-blowing about watching the band switch between both languages alongside difficult riffs and vocals – hardly an issue for Ankh-necklace-donning guitarist Sanders, as Nile forming in 1993 and being an Egyptologist would have given him quite the head start.

Eames exudes a confident and professional exterior throughout the show, knowing how to orchestrate the crowd with friendly banter and appreciation – he genuinely fits in well as a frontman for the South Carolina unit.

There is no surprise that a chunk of the crowd (if overhearing conversations in the smoking area is enough to go by) are actually either here to see Kollias, are avid drummers themselves, or both. The Greek machine has been notorious in the metal scene for his outrageous drumming techniques – with instructional DVD’s under the belt insinuating that to build up skill you would basically need to practice 30 hours a day. Kollias provides a completely face melting performance throughout; with at one point a stick comically shattering in half mid-pound and a new one being pulled out faster than anyone could process what happened. 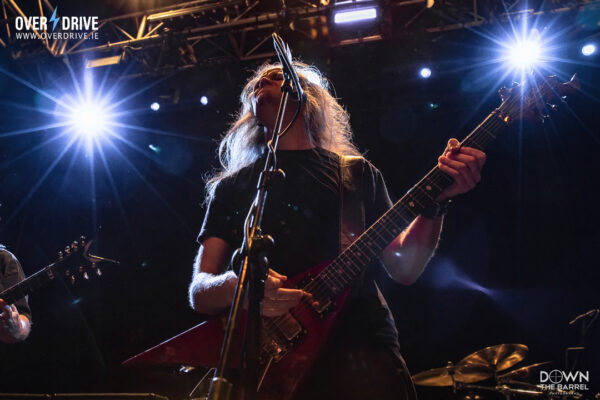 During some downtime after The Howling of the Jinn, Sanders reminisces with the crowd – pointing to the forefront of the balcony area, he says he remembers a certain person was standing in that spot in 2005 when the band played a particular song, and dedicated that song to that person – Sarcophagus. Many heads swivelled around as no one caught the name, but people replaced the confusion with some movement in the crowd as the ‘down tempo’ In Their Darkness Shrines album favourite suddenly blasts out.

4th Arra of Dagon creates an almost pseudo-encore vibe in the room, with some partially believing the introduction of the song may be a fake outro to the show. However, the real encore (minus all the “we’re going to leave and then come back” funny stuff) hits the crowd hard.

Many people get the last bit of hype out of their system with Black Seeds of Vengeance – finishing with the entire room yelling back the song title to the band, as if a mantra, under raised horns and whirling hair. 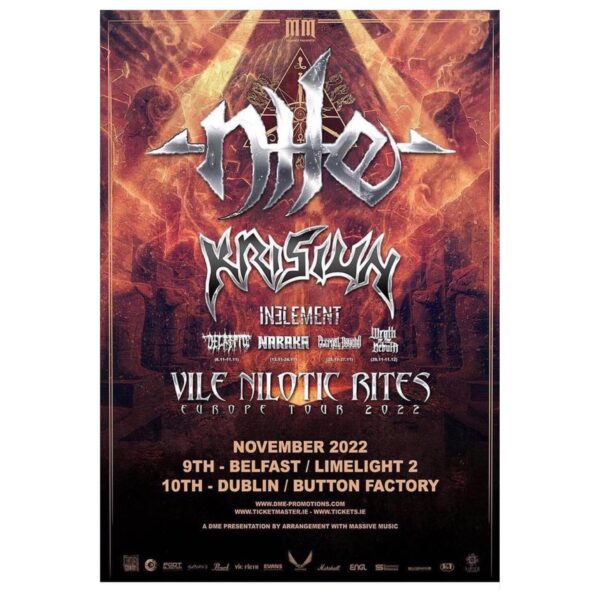