Dublin’s Voodoo Lounge on the Quays just outside the city centre is fast making a name for itself as being a regular metal nest. Not just the run-of –the-mill blood’n’guts, thrashery that is so well known, but also the more exploratory side of metal. Orphaned Land are such an example. 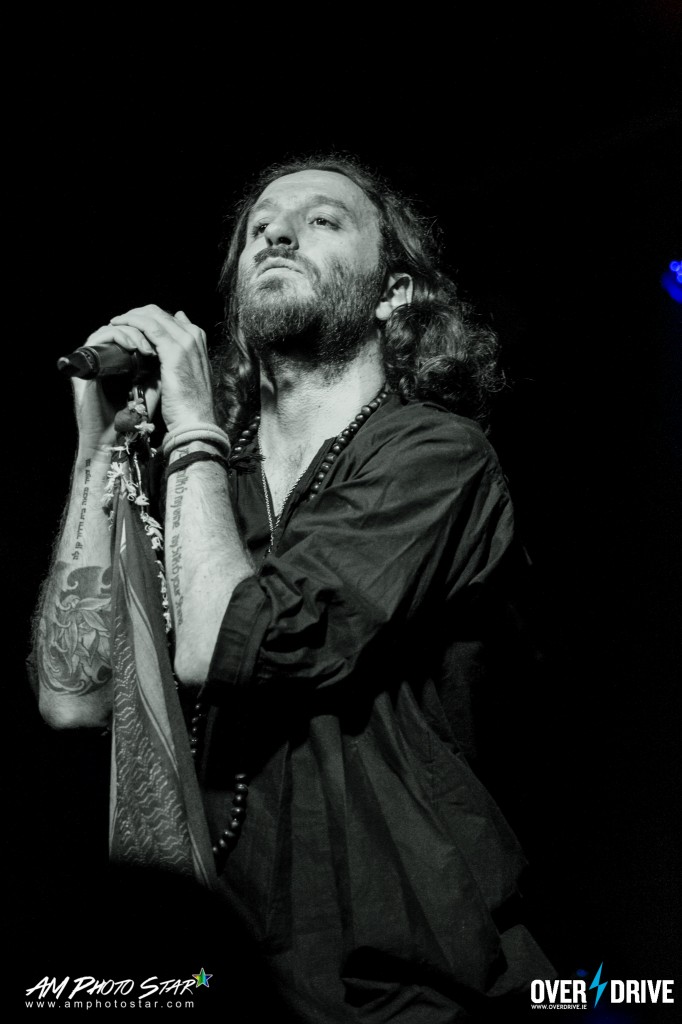 Tonght, support acts come from French opera metal act Mylidian and power metallers Benighted Soul. Mylidian have the difficult task of warming up the crowd of about 10 people who are there early. But the show must go on. I feel that Kamelot have a lot to answer for here. The music is very balladesque, but it has the sharp taste of death metal in its jowls. Two singers: 1male and 1 female interact as a pair of very professional musicians: invoking a courtship that feeds the emotional need to enhance the nature of the lyrics and music behind them. It’s raw and thought provoking. The lyrical harmonisation abilities are right up there with Nightwish, Lacuna Coil and Tarja.

Mylidian’s cathederal-esque sound and crushing riffage are nothing short of hair-raising. The sound pulls something from inside you and makes your hair stand on end. You just feel like closing your eyes and swaying. Sick shred solos appear from both rhythm and lead guitarists and the bass section’s 2-handed tapping is right out of the good old days of the 80’s thrash metal scene. But it’s the drumming that stands out here. The rhythm is infallible, regardless of how fast it’s going. The final song of Mylidian’s opening act, is by far the most surprising. It’s pure death metal fury! The crowning achievement of their closing out is the pinch harmonics in the guitar matching the vocal ability of the female lead singer, much like Phil Anselmo and Dimebag Darrell (RIP) on “Cemetary Gates” in their live CD “101 Proof”. I especially liked that bit.

Up next is Benighted Soul. There are many, many words in the English language, but only 3 are needed to describe this band. HOLY. FUCKING.SHIT!!! From the first note played to the last, this band kicked ass! Its like Sara Jezebel Deva (Cradle of Filth), gets into a sing-off with a young Randy Blythe (Lamb of God). It’s unbelievable. The same setup as Benighted Soul (2 singers, 1 male and 1 female, 2 guitars, bass and drums), but this band were paying attention to what was going on around them.

They ripped the stage apart with the death growls of the male singer, and softened them with the female voice. It’s hypnotic, chaotic, and downright musical mastery. Guitars, bass, and drum sections are all masters of their crafts. And again, the drumming is intense. Never missing a beat and it has the speed of Joey Jordison from Slipknot, and the skips and fiddliness of any jazz drum master. It’s beautiful. There is one thing I must take away from this band, and it’s not about the band. It’s about their management. This crew should be playing Wacken: Open Air, earning healthy, hearty chunks of payers fees, and not getting support acts here and there. These guys (and girl) are going to be colossal. Watch out for them, because chances are, they won’t be a big name on a poster for a while, and that’s really sad. This is one of these rare times that you see a band on a meteoric rise to the top, and I was there to see their lift-off. 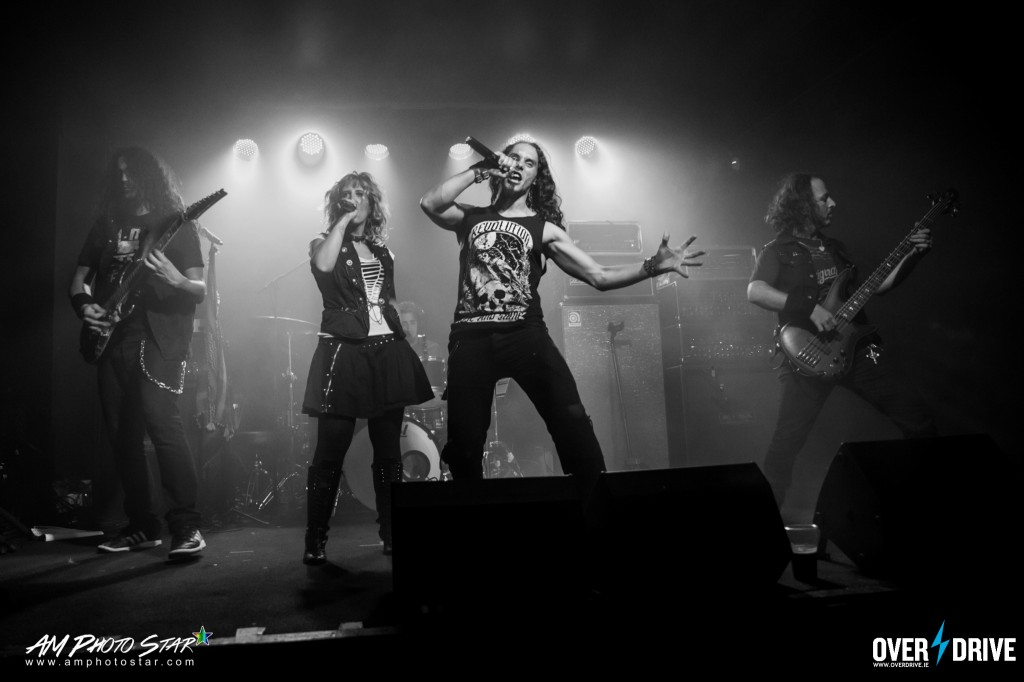 But I digress. When the main event happens, we are listening to Israeli folk music. I find that odd – since I’m here to see a metal band. They all appear at once, one after another and get the ball rolling with “A’salk” and “Halo Dies”. Vocalist Kobu Fahri has a real look of Zen in his face. We are greeted with a hearty “Shalom, Dublin!”, as they wind down to introduce themselves. Fahri feels no pressure to overly perform and lets the music flow through him. If you’ve never heard of Orphaned Land, I’ll give you a hint. Think System of a Down meets Tool, and a chunk of Pantera-style licks. Awesome stuff I think. The lyrics are a little too spiritual for my taste, but the music is absolutely fantastic. The love for their music is very clear in their delivery. They really enjoy what they’re doing and really express that on stage. 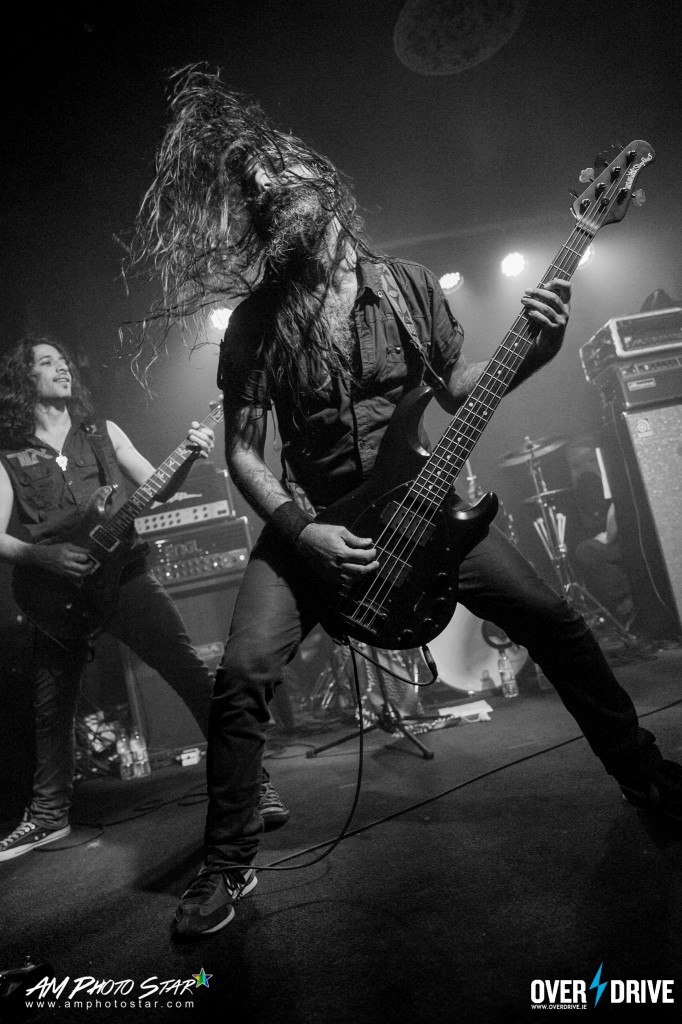 Guitarists Chen Balbus and Idan Amsalem provide the chunky metal crunches, whilst simultaneously and melodically shredding the shit out of their strings. It’s done in quite a humble way – OL profess that their music is about peace, unity and love among all people. If this was an instrumental band, you wouldn’t know that. I love metal, and this was metal. Ok – the vast majority of it was metal. Amsalem takes a break from shredding to give us a little ditty on the Bouzouki (a Greek version of a banjo-mandolin hybrid). Unfortunately for me, my lack of language skills lets me down again. Some of OL’s songs are in Hebrew, so I can’t comment on their content, which is a let-down, I know. As with other bands that I have covered with Overdrive, I’m slightly in awe of bands who really embrace their nationality and express that in their career. With such a controversial country at the moment in the east, that fact that their message is unwavering really speaks volumes about the genuine love that people can have for each other, despite their background. 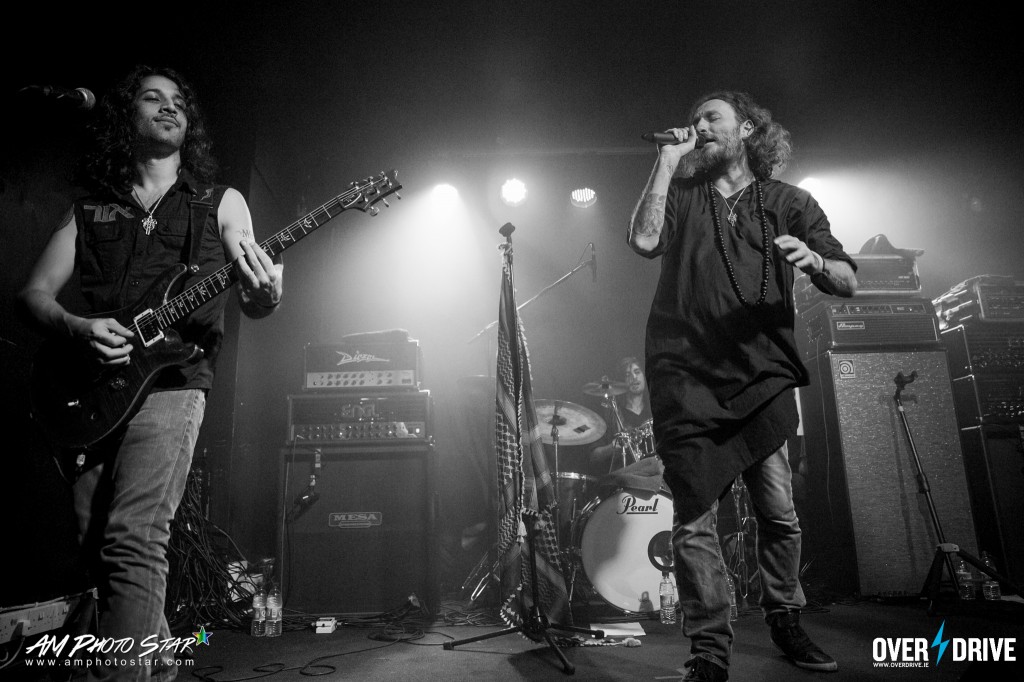 The band embraces their music as a way to bring peace to the troublesome arenas of modern-day planet Earth. There is one little thing that did startle me. Before “Let the Truce Be Known”, there is a backing track of gunfire, explosions and people crying. That kinda takes the buzz out of me for a little while, because I’ve seen the video for that song and when you really think about it, it’s not the place for highlighting the horrors of war.

Now that being said, there are still plenty of ball-busting rock plateaus. “El Meod Na’Ala” is a behemoth song of low-tuned guitars battling it out whilst being overseen by bassist Uri Zelcha (who hasn’t stopped headbanging or swaying since the gig started). “In Thy Never-ending Way” is a headbanger’s dream. Looking across the floor, you cant see faces – you see masses of hair bouncing. Hands in the air and eyes closed, Fahri embodies a man at peace with himself and what he does. The fans pick up on it and just let themselves be taken by the music. Whiplash city tomorrow though…. 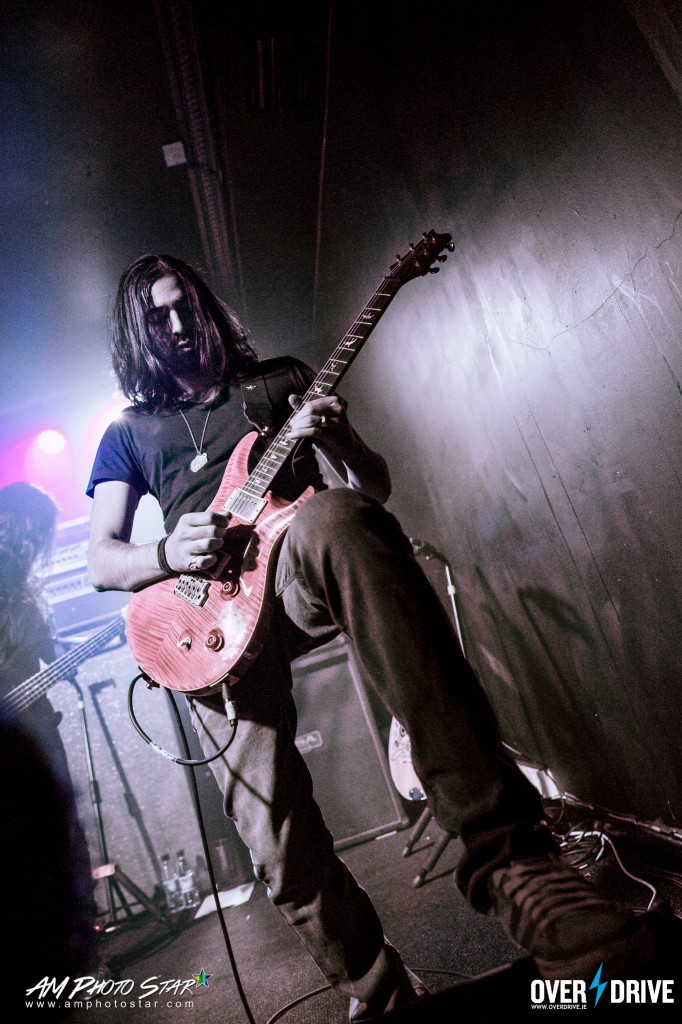 For all the different elements of musicality that have been on show tonight, the drum section, brilliantly hosted by Matan Smuely, holds the entire thing together, because drumming to Israeli-folk-prog metal is a hard niche to get off the ground. You really need to see it to understand what I’m talking about. But he’s good….DAMN good. For encores, we have a soul-enlightening experience of “Mabol” and “The Storm” combined into one song, and thy close out with “Norra” and “Ornaments”. The only lyrics in the last song are “Li Li Li Li Li”, and as the crowd sing in unison with the band, they keep singing after the band has finished playing. They line up on the stage and just listen to the family they have helped create here tonight. Everyone is together in the most epic way. And the translation of OL’s message has found the ears of their targets. 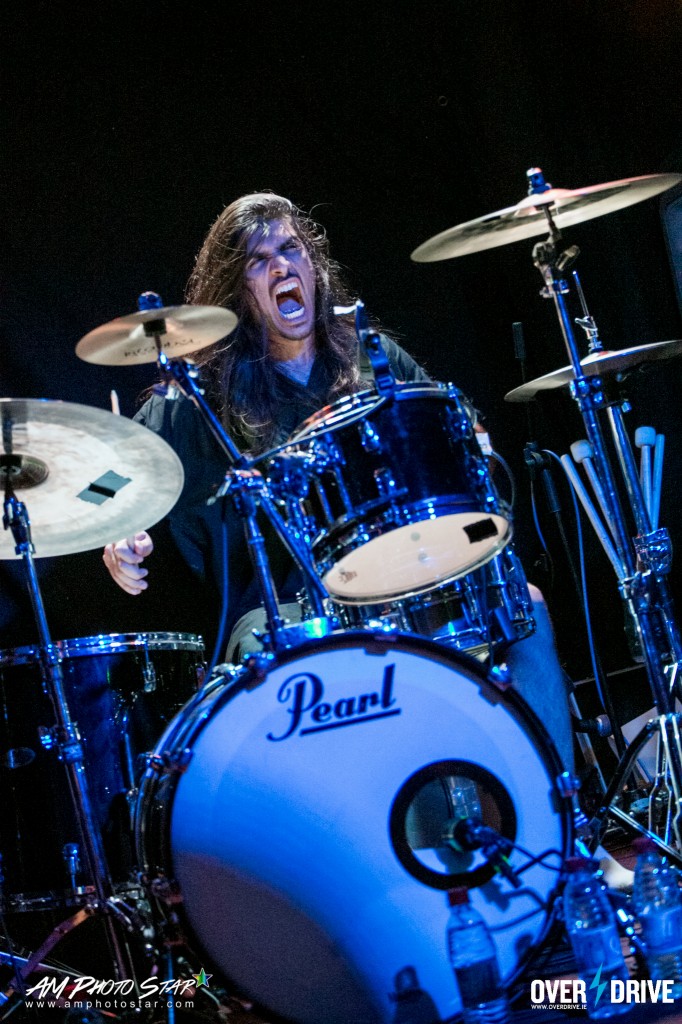 It’s been a crazy night. From operatic metal, to power metal and Israeli folk prog metal, it is definitely said that the Voodoo is fast becoming a hub of international acts that are gaining followings from every community in Dublin and Ireland. The best part about it is, IT’S ALL METAL, BABY!!!

Check out more gallery shots of the gig below!

Birth of the Three

The Kiss of Babylon

A Call to Awake

Let the Truce Be Known

In Thy Neverending Way 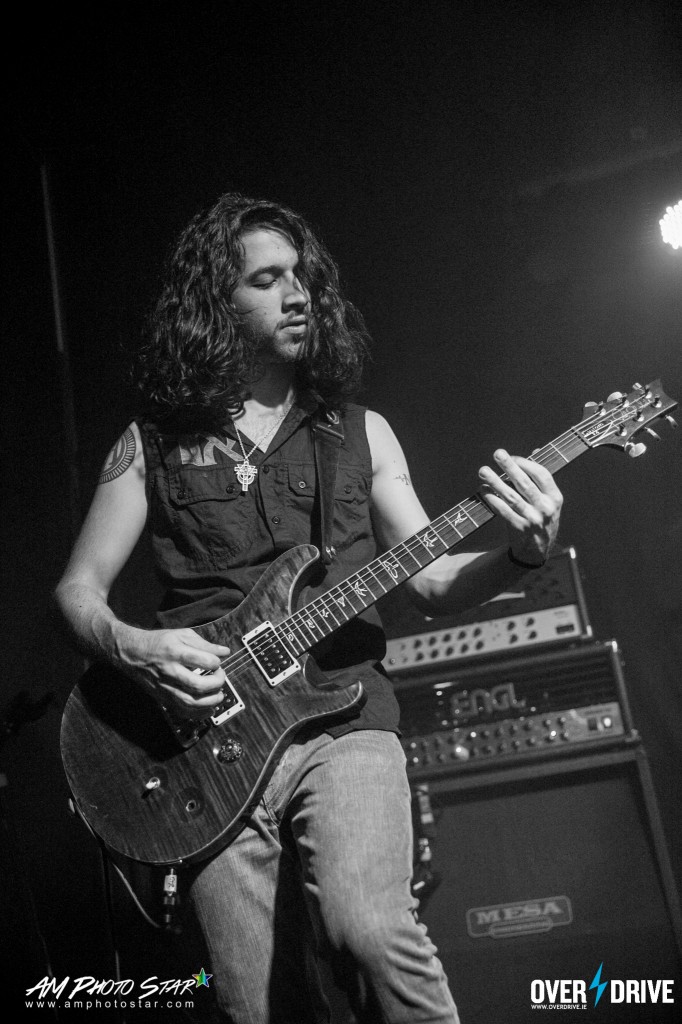 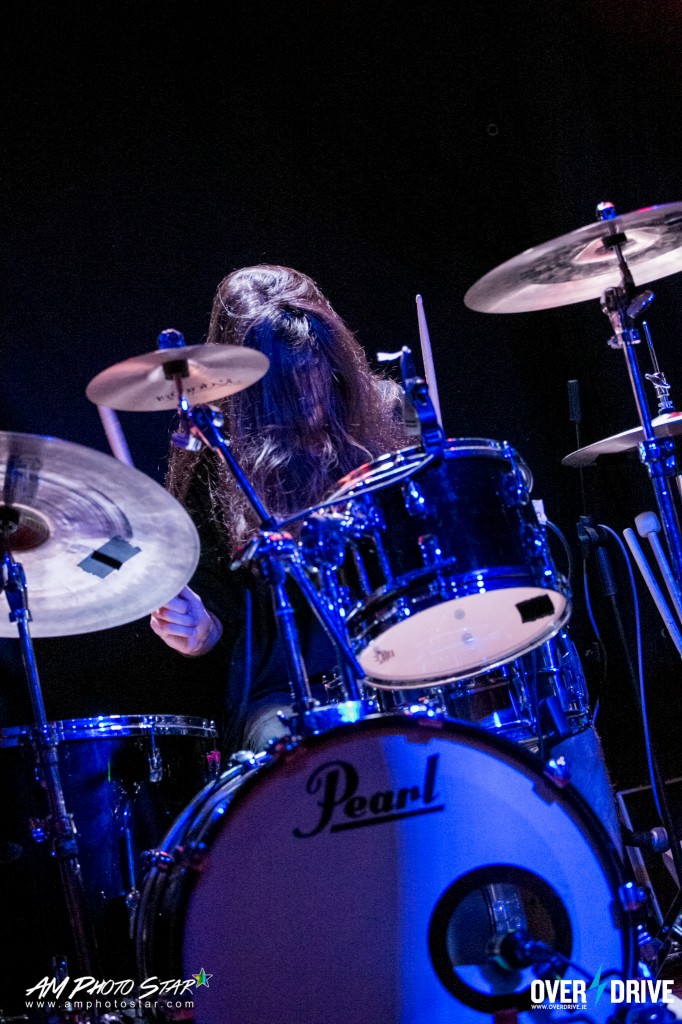 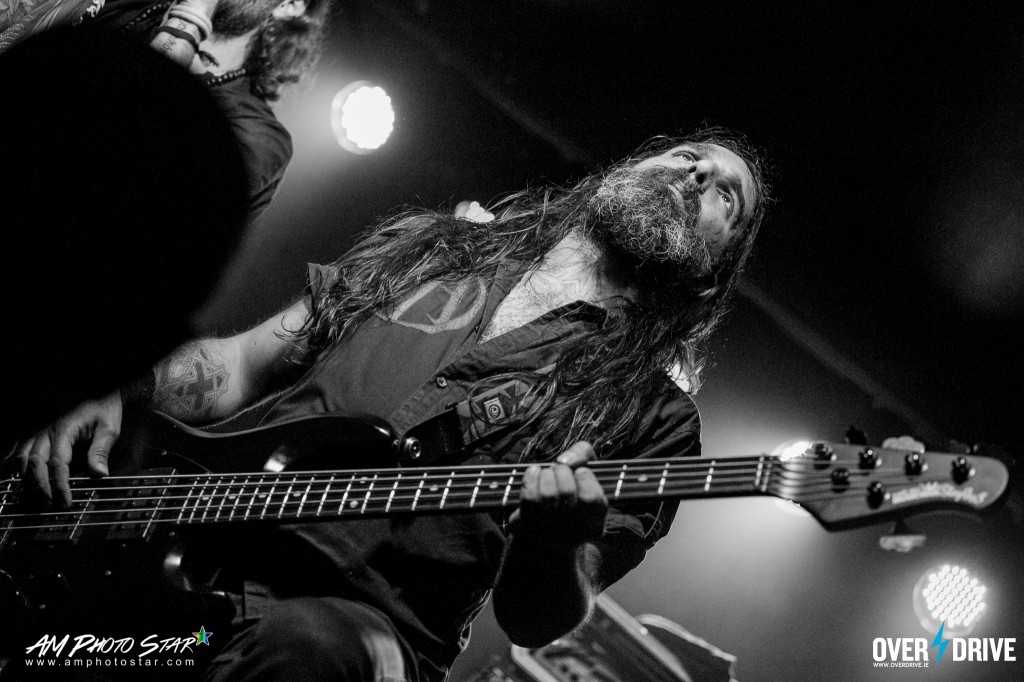