With winter not yet fully put to bed, a sweaty thrash gig is the antidote to help us through this bitterly cold and miserable Sunday evening; in Ireland’s capital city. New Jersey veterans Overkill return for their second show in the bands 35 year history and this time around, the ‘wrecking crew’ have teamed up with Poland’s Vader and London based metal unit,  One Machine – making this one hell of a touring package! Get ready for a night of ear bleeding metal! With a steady trickle of punters making their way through the Academy doors, the echoing rumble of One Machine can be heard tumbling and crashing around the foyer of the venue. The hustle and bustle of the merchandise stall seems to be drawing more attention, rather than tonight’s excellent opening band who fill the stage and the ambience of the venue with true metal spirit. Vocalist Chris Hawkings lays down an impressive performance that’s loaded with visceral energy. A magnificent display of crushing riff’s and soaring solos smash through the house P.A, with a positive effect on the increasing crowd who witness One Machine’s artillery for the first time. 3/5

Vader’s thrashy death metal stylings have always been a personal favourite of mine and have witnessed them many time over the years, I have yet to leave disappointed. There’s something about the blend they have developed over the past 30 some years that just grips the listener by the jugular, drawing you in to their fantastic twisted and technically brilliant world. Speaking of their ability to drop technical and deliciously complex guitar riffs, tonight is no exception, as the overall brashness of their set is loaded with spine tingling melody and vocals that you can actually understand! Drummer James Stewert is simply spellbinding behind the kit, churning out drum rolls and cymbal trickery over his inexorable kick-peddle’s that drive the low-end of Vader into the very depths of hell itself! The crowd admittedly took a song or two longer than expected to warm up, but the band were on fire from the start. New tracks like ‘Triumph of Death’, blend seamlessly with classics like ‘Sothis’ and ‘Back to the Blind’. Those that were idly waiting for Overkill to come on were [by the end of the set] converting to a genre they wouldn’t normally have listened to. Setting an intensive pace that would be difficult for any band to follow; it was time to see what Overkill were going to bring to the party. Fantastic! 4.5/5

It had been two years since Overkill‘s debut Irish performance and with a familiar understanding of the intensity of an Irish metal audience, the New Jersey wrecking crew burst onto the Academy stage like an well orchestrated bar brawl accompanied by a shit-ton of strobe lights and 2014’s White Devil Armoury ‘Armorist’ heading the attack! It’s obvious that Bobby Blitz and Co. are not messing around here tonight. ‘Rotten to the Core’, ‘Feel the Fire’ and ‘Hammerhead’ sound heavier than they ever.

Highlight performance of ‘Coma’ literally shook the building causing the now heaving Academy floor to burst into a blur of denim battle jackets and hi-top trainers! The living, breathing heart of thrash metal is alive here tonight and judging by the noticeable range in age demographic, the future of thrash is in safe hands indeed! Overkill have been laying down the thrash blueprint for over thirty years and have their live shows down to a tee! The overall image of each band member demolishing any notions that they are past their prime is a deeply satisfying sight to see.

‘Blood Money’, ‘Bare Bones’ and ‘Nice Day..For a Funeral’, remind us all just why Overkill are masters at what they do. ‘Horrorscope’ provides an unexpected laugh when guitarist Dave Linsk’s sudden absence from the stage, (due to technical issues with his guitar cable) creates confused glances from the rest of his band-members, all the while the blissfully unaware guitarist stood by the crowd barrier headbanging to his own band until his guitar tech fixed the problem! Dave Linsk and Derek Tailer’s guitar work is on point and as tight as any due could be with their flawless delivery and boundless energy. Throw in the gargantuan sound of DD Verni’s bass and the captivating presence of Bobby ‘Blitz’ Ellsworth and you just might not see a better band in a venue of this size.

Even when Bobby Blitz has to routinely leave the stage there is no momentum lost and the energy never falters. All of this is backed up by a light show that put most to shame. Throw in ‘There’s no Tomorrow’ (even with one guitar it sounded savage) and the fastest version of ‘Elimination’ likely to be aired this year and a truly exhausted and fulfilled crowd walk into the refreshing spitting rain of Dublin… 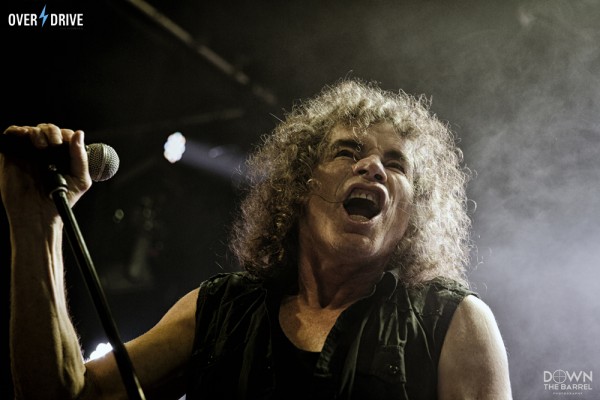 For those that were there I think everyone would agree that this was a great straight up metal show. No showboating, no gimmicks.

‘Rotten to the Core’

‘Hello From the Gutter’

‘Nice Day… For a Funeral’ 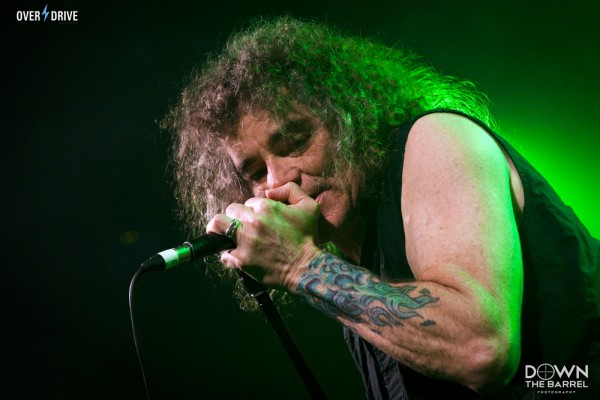