Rock the Coast features headliners of The Scorpions and Rainbow with a huge and varied undercard.

All this plus a weekend in the sun is anxiously awaited and is a stark contrast to the biblical rain and mud-fest back in the UK for the annual Download Festival which is also happening this weekend.

We arrive in time for gates opening at 13.30 and the anticipation for the days entertainment to kick off is well and truly buzzing around us. In a large but quickly moving queue we acquire wristbands for entry which has a cashless chip for payments in the venue. We join a queue to pass through a rigorous security check again that moves rapidly.

Seeing as this is a brand new Festival, the venue itself is impressive, situated on a hill underneath the beautiful Castillo Sohail. Two main large stages stand side by side with a spectacular background view of the Mediterranean Sea.

Time to get stuck into the day’s entertainment… 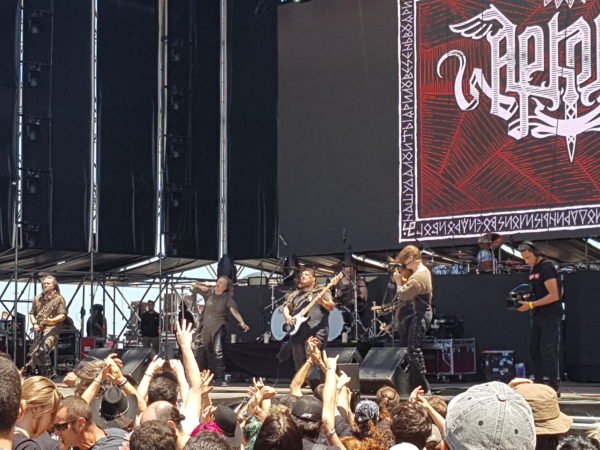 The small crowd that has arrived early to site quickly gather around Main Stage 1 as festival openers Arkona begin their Folk Metal assault on Spanish soil.

A mighty cheer erupts as Masha Scream hits the stage like a whirlwind. The Russians pagan’s music is heavily influenced on Russian mythology, they incorporate traditional Russian instruments and black elements into their sound and singer Masha can transition easily from clean singing to death growls. Arkona soon get the crowd moving to their energetic performance to songs like Yarilo and Goi, Rode, Goi.

Next up is Blaze Bayley’s turn to play in the blazing sun. A bigger crowd has gathered to hear some Iron Maiden tracks from the ex-vocalist. 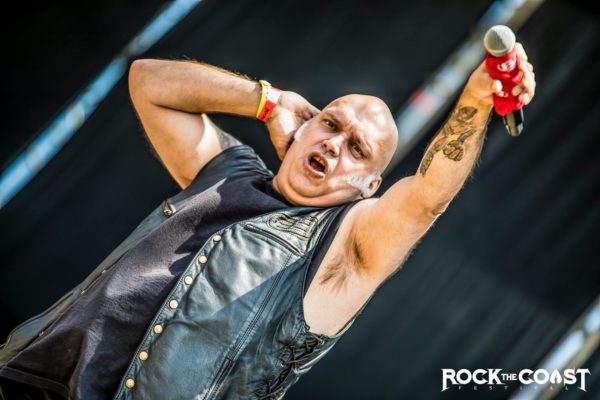 This year marks the 25th anniversary of Blaze’s time in Iron Maiden and the vocalist reminisces about how lucky he was to do so between 1994 and 1999. The setlist comprises of tracks from The X Factor and Virtual X albums such as Sign of the Cross and Lord of the Flies but The Clansman is met with much happiness by the crowd.

The mass continue to sing and chant along with the frontman and the winds that are swirling around seem to take not affect to their fervour. 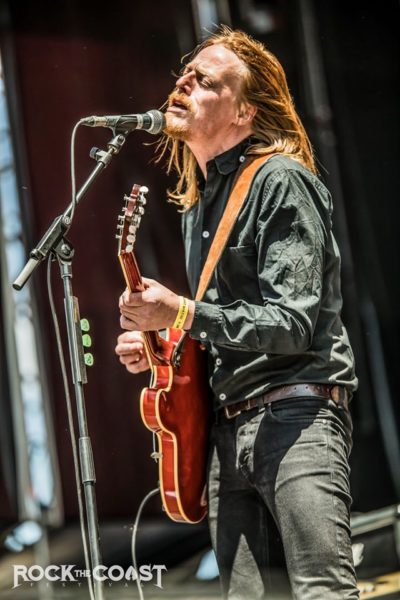 Joakim Nilsson’s crew fight hard in their struggle against the whirling and not subtle summer breeze and glaring sun where faces now seem to match their red backdrop. The rest of the setlist comprised of tracks from the acclaimed Hisingen Blues, the set finishing with a stunning rendition of The Siren with Joakim’s unique raspy vocals leaving the lyrics “Tonight a demon came into my head and tried to choke me in my sleep” echoing through the air as the band leaving the audience fulfilled.

Next up on Stage 2 was Spain’s own Leo Jimenez, former singer of Saratoga and currently also with Stravagannza.

Leo pulls an adoring crowd who provide the loudest singalong of the festival; in their native tongue. Jiminez, who has also played the lead in a successful run of Jesus Christ Superstar, treats his sun drenched audience to his powerful falsetto styled vocals for a 40 min set.

Jari Maenpaa and his crew from Wintersun hit the stage with an enormous force to the swarm waiting patiently for them. The Finns are celebrating the 15th year anniversary of their album Wintersun and the adoring Spanish audience is charmed to be treated to the release in its entirety. 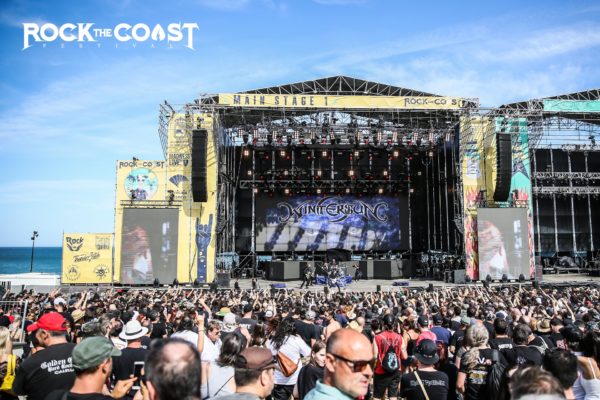 The Finnish ‘melodeath’ troupes open their set with Beyond the Dark Sun which generates huge appreciation from the baying crowd. Jari is a charismatic and energetic frontman, as he moves all across the stage to reach out to all of the audience. The entire band seem happy to be there and gel well together, they mean business to put on a good show and not just go through the motions.

Soaring vocals and riffs galore, major ‘Woahs’ from the crowd for Death and the Healing and Sleeping Stars, Wintersun certainly left their mark on their adoring great unwashed.

The first trek up to the stage in the castle is for Alkaloid, extreme progressive, death-metal from Germany featuring monstrous sticks-man Hannes Grossman (Ex-Obscura, Necrophagist). It’s quite a steep kill up to the castle, which may be a struggle later on in the evening with a few drinks on board.

The walled castle has a capacity for 2500 so ideal for smaller, lesser known bands.

The Germans kick off the sublime Kernal Panic from last year’s release Liquid Anatomy, which then rolls into the crushing Cthulhu.

Sounding heavy as hell with a great sound throughout featuring technical death meal riffs galore and extensive range of vocals from frontman Morean . It’s a shame that they weren’t granted a larger audience to witness their set.

London’s rock veterans UFO brings their Last Orders 50th anniversary tour to Rock the Coast to a huge eagerly awaiting audience. I actually met a lot of people from the UK who travelled to the fest specifically for UFO so they have many fans who will travel for them. Mother Mary is the opener which goes down a storm.

The sound is perfect throughout the entire gig as the sound interfering winds from earlier have now died down. Vocalist Phil Mogg vocals sound crisp as he belts out the hits for the adoring masses aided by some of the greatest riffs provided by the fabulous Vinnie Moore. 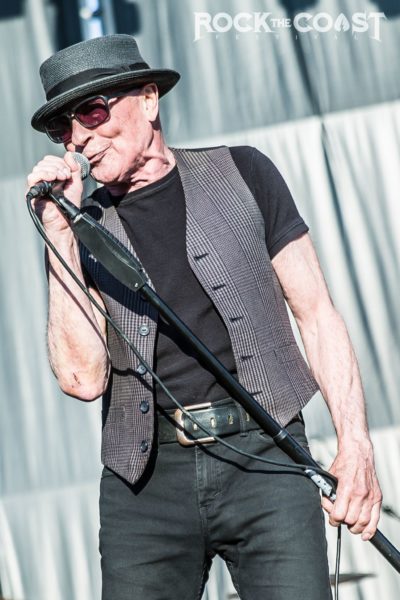 Lights Out, Only You Can Rock Me, Too Hot to Handle and Rock Bottom all added to the early evening singsong but finishing with Doctor Doctor ensured a full floor of dancing and singing, nailing down their legendary status.

The visual intro shows a helicopter flying through a city skyline which fires 5 missiles on to the stage and through the smoke bombs out walk. Scorpions with Going Out with a Bang to rapturous applause. Make it Real quickly follows with the Spanish Flag as a backdrop.

Rudolf Schenker glides seamlessly across the full surface of the stage like a rock God totally defying his 70 years on this earth. The stage is entirely his to own as the wonderful and fitting Coast to Coast is belted out.

One of the first Scorpions songs I heard and adored as a teenager, I finally get to hear for the first time live as the chugging riff of The Zoo fills the air. Much singing and dancing is applied.

There is plenty of crowd participation with singalongs prompted by Klaus Meine yelling “Espana “while they perform a variety of big numbers such as Wind of Change, Send Me an Angel, Blackout and Big City Nights.

Ex-Motorhead drummer Mikkey Dee gets a rapturous applause for this stunning drum solo where the floating drum riser scales halfway up the height of the stage. 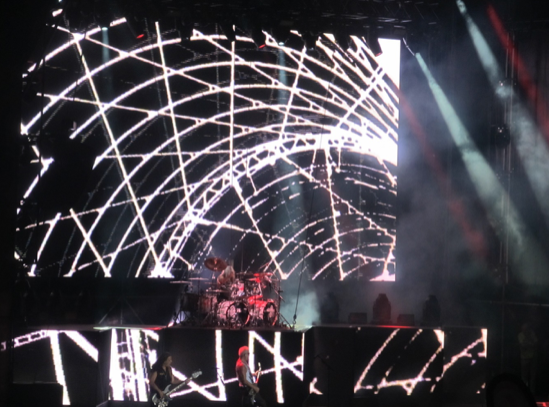 With each drum beat a Scorpions album cover appears on the screen behind until the entire Scorpion’s discography is on view.

The encore brings us super power ballad Still Loving You, prompting crooning and upheld lighters/phones from the masses and they then finish with Rock You Like a Hurricane to send the crowd wild. Scorpions have conquered Rock the Coast.