The sun is splitting the rocks and a gentle breeze is giving us a sympathetic lift as we make our way back to the awesome Rock The Coast Festival in Spain’s Fuengirola, Málaga. So, let’s get stuck in… 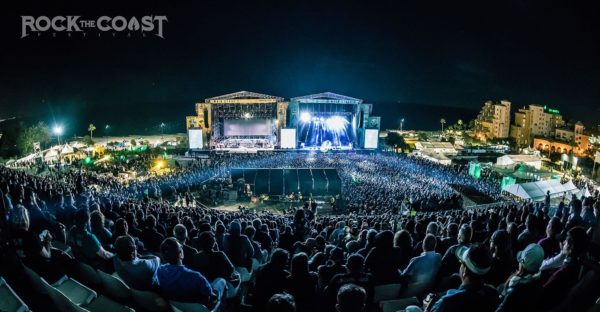 Finnish prog rock band Von Hertzen Brothers are the first residents of Main Stage 1 on the festivals second day, with the scorching sun beating down.

Comprising of brothers Mikko, Kie and Jonne Von Hertzen they burst on to stage with gusto to a small but eager gathering who have got to the arena especially for their show.

Mikko bets out You don’t Know My Name which is shows similarities in his vocal abilities to the late great Chris Cornell. As the strong summer breeze swirls loudly against the stage Mikko quips “Could somebody please turn down the wind machine”. 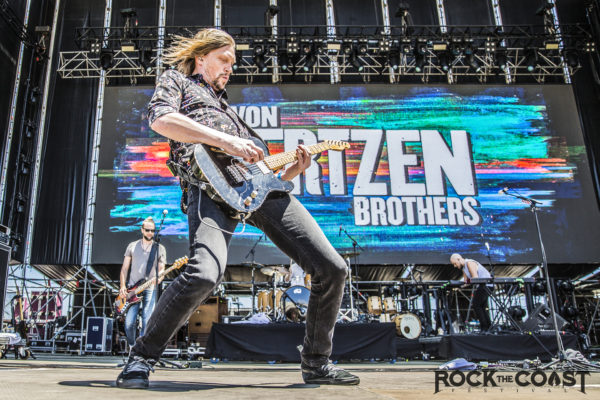 Disturbing wind aside VHB sound terrific, New Day Rising and Frozen Butterflies add to a wonderful set. They give an amazing performance and such a pity they didn’t gain a bigger audience they so richly deserved, definitely one of my highlights of the festival.

I had been advised prior to attending the festival to check out Jinjer whose popularity seems to be soaring. Judging by the swelling in the attendance around Main Stage 2, in the 28 degree heat, this is quite obvious. 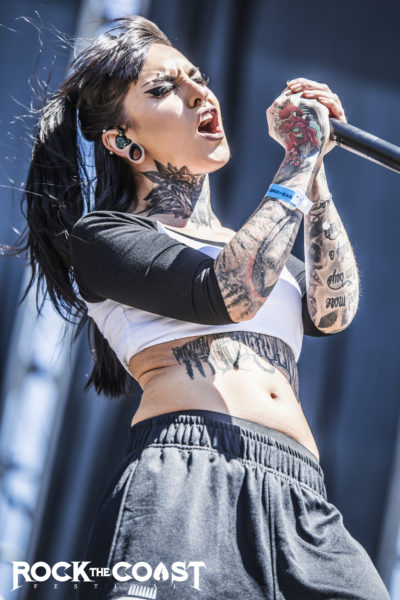 Earlier this year they took part in an European tour with a savage line up of Amorphis/Soilwork and Nailed to Obscurity.

The 4-piece Ukrainian progressive band incorporate groove/death/metal-core and Djent into their sound.

They hit the stage with fury to a hungry appreciative audience to Words of Wisdom.

Lead singer Tatiana Shmaylyuk has such versatile vocals, while singing melodic clean vocals it can immediately switch to evil guttural growls, it is remarkable to watch live such an undeniable talent.

Jinjer treat the crowd to tracks such as Ape, Teacher Teacher and the sensational, Pisces. It’s been a great performance and I would say they have added to their growing legion of fans, myself included.

Swedish melo-death merchants Dark Tranquillity take to Stage 2 with unbridled passion to a sea of black slowing melting in the sun’s gaze to Encircled from 2016’s acclaimed release Atoma.

Frontman, Mikael Stanne pounces relentlessly across the stage to an adoring but sweaty troupe. Unfortunately the sound Gods are not in DT’s favour today, keys sound low and guitars fade in and out. 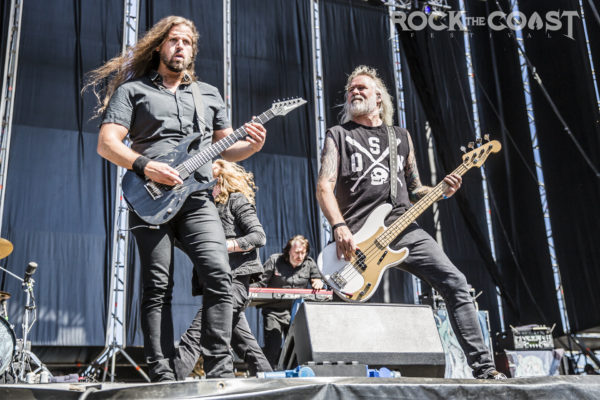 Atoma, Clearless Skies, ThereIn and the wonderful Misery’s Crown added to the Gothenburg rockers setlist. It’s such a shame the sound blemished the execution the band were fulfilling exceptionally.

Hypno5e are an avant garde/progressive/post rock band hailing from France. They are currently signed to The Ocean’s, Robin Staps, Pelagic Records.

I only caught half their show but their performance is lingering in memory and was enough to warrant a mention. I look forward to checking these guys out further.

Next band to grace the Castle Stage are Crisalida. Hailing from Chile this 5-piece  progressive rock quartet proudly drape the Chilean flag across a speaker before they begin.

Singer Cinthia Santibanez sways passionately in her performance protracting a powerful and exquisite voice where the sound sounds terrific after Dark Tranquillity’s nightmare. 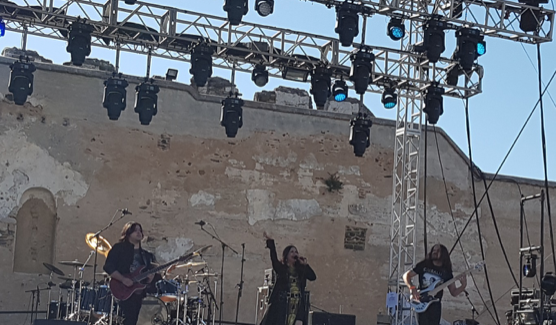 The band would appeal a lot to fans of Anathema and Porcupine Tree. Their show was well received by the small crowd that was in attendance.

Fizzy with excitement along with a large crowd awaiting Stockholm’s Prog Gods to hit the stage.

They casually saunter to Main Stage 2 and burst into Sorceress. The Swedes who announced back in May that at last the follow up to 2016’s Sorceress will be titled In Cauda Venenum (The Poison is in the Tail), Opeth’s 13th studio release will arrive later this year. 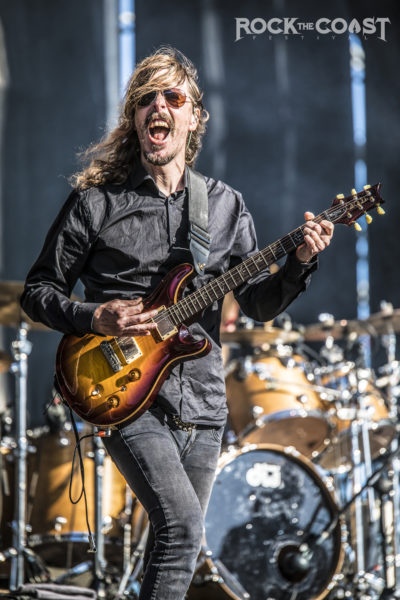 A huge roar is release at the 8 second mark of Ghost of Perdition and the crowd spasm into ferocious head-banging. Mike then welcomes the crowd and the now expected dry-wit banter begins.

He reminisces of a previous Spanish visit where he was delighted the name Miguelito which prompts chants of “Miguelito” from the eager crowd.

Mike suggests Fred feels a little left out and would maybe like a nickname to like maybe “Peluca” (meaning wig) Thus resulting in chants of Peluca to Fred from the remains of the concert. All good fun as Demon of the Fall is introduced.

The sound is perfect on stage compared to the previous tenant and the wind seems to have died down. Mike exclaims how lucky the crowd are to be in the presence of greatness of his idol in the vicinity, meaning Richie Blackmore, stating he looked forward to seeing him later Humbling to see our idols have idols also.

The Devil’s Orchard, Cusp of Eternity, In my Time of Need and finishing with the epic prog death classic Deliverance bringing a truly enjoyable 75-minute set to an unwanted end.

Next to hit to the Castle are Sweden’s Tribulation. Unfortunate at the fact they are due to clash with Rainbow soon hitting the main stage, the vampiric masters can still not be missed. Despite the nearing clash there seems to be a larger crowd that previously noted at the castle stage. 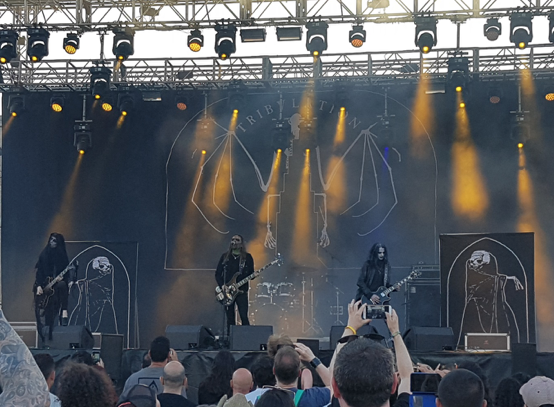 Smoke machines are working in overdrive as The Children of the Night take to the stage. Sound is terrific as they unleash tracks The Motherhood of God, Ultra Silvam and Strange Gateways Beckon to the adoring horde.

A quick dash required out to the main stage and at least Tribulation can be seen in the not too far future at The Siege of Limerick this coming October and their return as guests to GHOST in Ireland’s 3Arena on November 20th. 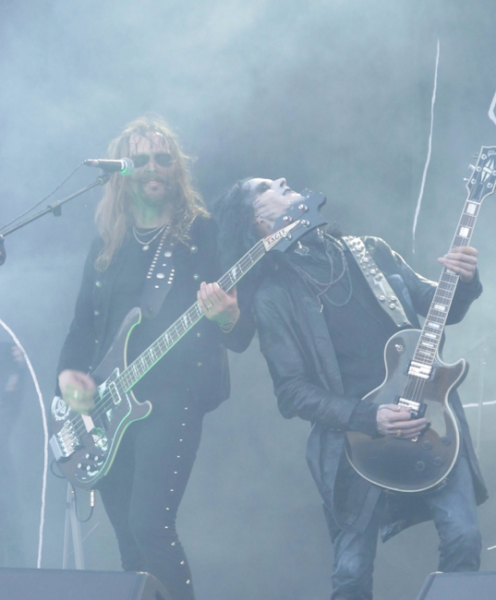 The crowd scales all the way up the hill to the castle with the masses taking in Rainbow. We arrive with a massive singsong for Since You’ve Been Gone and straight into The Man on the Silver Mountain. Richie Blackmore now at 74, is adorned in medieval clothing and encourages all singalongs enthusiastically. 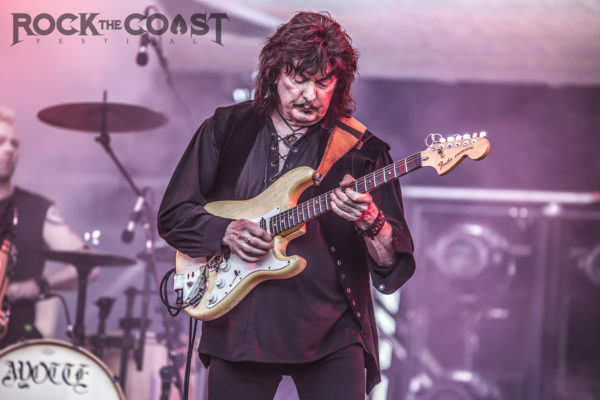 Chilean singer Ronnie Romero is a fitting vocalist for Rainbow and performs his duties well. Next offerings are Deep Purple selections of Perfect Strangers and the spectacular Black Night against a backdrop of a darkening sky and a full moon reflecting on the calm sea.

Difficult to Cure was up next and it felt like it was played for 2 days, next a rocking All Night Long was belted out and the adoring army were back in full song.

Next the drum beat to signify the song I had been waiting for, the stunning Stargazer.The spectacular Rainbow Rising album cover appears as the backdrop and there is a unison chorus of “High noon oh I’d sell my soul for water” Though Ronnie is no Dio I felt he did a great job. 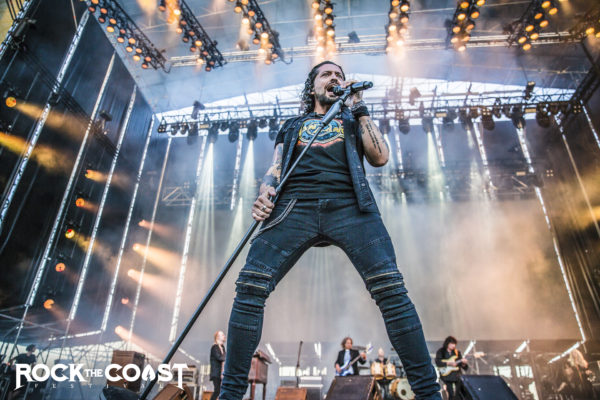 Exit stage left to the Castle Stage to catch the amazing Aussie’s, Twelve Foot Ninja. In preparation to attend RTC the Outlier album was one that stood out.

Described as a fusion metal band from Melbourne they bring so many elements to their sound, they can sound as heavy as the depths of hell one minute and the next they are grooving to a samba sound.

The castle is the busiest I have seen it yet with the crowd bopping, jumping and moshing in front of the fury being unleashed on the stage. Oxegen and the groovy Point of You are high points for me.

Lead singer Kin is a ball of activity on stage and the sound is superb. They have definitely been the most energetic band and crowd of the festival. It felt like it was over as it just started. Hopefully the band gain a lot more recognition that they richly deserve from their European Tour. 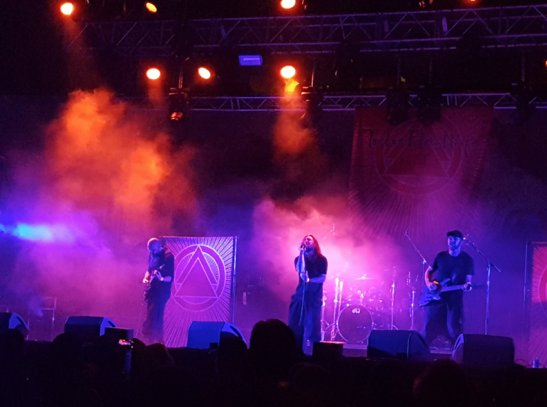 The Darkness are a band that I never gave the time of day to due to THAT song but they are giving quite a performance on Main stage 2. 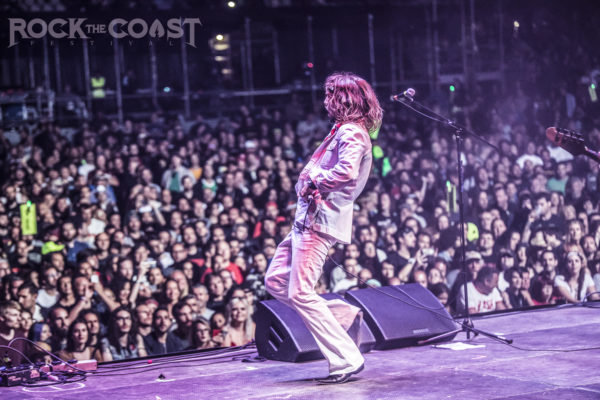 The crowd is bouncing as frontman Justin Hawkins has them eating out of his hand. Unaware to myself how much of the setlist I actually do know and so do the crowd stomping and clapping furiously.

Givin Up is a particular banger with Hawkins, gyrating all over the stage. The crowd is ordered by him to “Bounce Motherfuckers”, even some poor soul is singled out for it as they break into I Believe in a Thing Called Love and the crowd go nuts with plenty of bouncing and attempted falsetto style singing.

It was a truly dazzling and fun show, I am sorry with myself that I didn’t give them a chance live before. 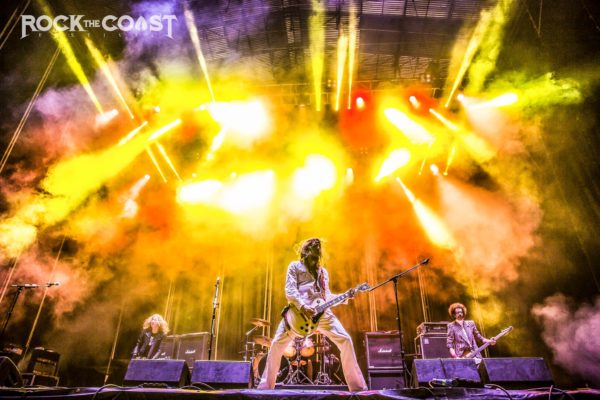 That ends the Rock the Coast weekend for me. It is a remarkable festival and did everything right. An utterly fab location by the sea, cashless chips on the wristbands so no pesky change therefore no bar queues and reusable cups for beverages.

The only gripes although very small and could be improved on next year was the food trucks, there were very few to deal with the amount of attendees and resulted in long queues.

The merchandise tent was 3-4 deep at all times, official event T shirts sold out within the first few hours (although are now available online), it was short staffed and disorganised. A few more toilets wouldn’t go astray either.

Muchas Gracias Espana, I will definitely be back next year.