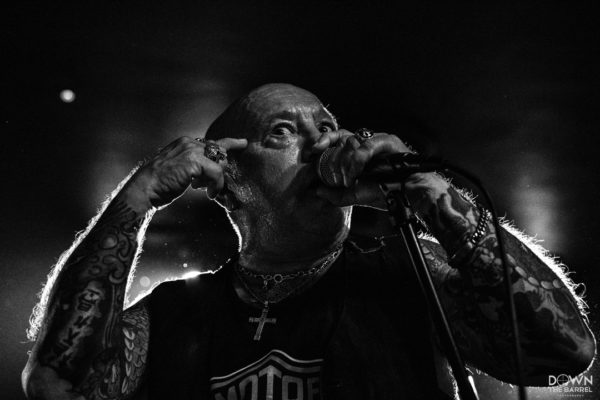 Dublin’s Voodoo is the ideal venue for a gig like this, scruffy, like most of the crowd that have already filled the room in time for Girlschool.

These four women rock hard and fast, exactly how rock n roll should be played. It’s been a long time since they played Dublin, frontwoman Kim McAuliffe joking that most of the crowd probably weren’t born the last time they were in town, and the band were clearly enjoying every moment of it, as were the near-capacity crowd, they walk off stage triumphantly, knowing the headliners now have a tough act to follow. 4/5

A quick changeover and Angry Anderson and the boys walk out on stage full of rock & roll swagger and macho Aussie bravado, getting straight down to business with classics like One Of The Boys, Juice On The Loose and The Butcher and Fast Eddy to name but a few.

At 71, Angry Anderson has more bite in him than front men a third his age, he’s every bit the Rock n Roll Outlaw that he sings about, and he’s not afraid to tell you what he’s thinking, even if it’s going to ruffle a few feathers, but hey, the day rock n roll becomes PC, is the day rock n roll dies.

The band are in fine form and the crowd too, sing along to every song, it’s exactly how it should be, denim & leather and fists in the air. Rose Tattoo wrap up their set with a double whammy of We Can’t Be Beaten and their anthem, Nice Boys and from tonight’s’ evidence, the song rings true, nice boys don’t play rock n roll, and they never will! 4/5

One of the Boys

Juice on the Loose

The Butcher and Fast Eddy

Once in a Lifetime

We Can’t Be Beaten

Photos – Down The Barrel Photography © 2018. All Rights Reserved.