After surviving “The Beast From The East” a week earlier, you’d think Irish people would’ve had enough of winter, but not the Metal-heads that made their way into the Tivoli on Saturday night for Satyricon.

The opening act, The Crawling, (4/5) do a fine job getting the crowd riled up and rewarded the eager audience with a new track, pleasing existing fans and earning plenty of new ones along the way. A band that you simply must see live and will be able to in the not too distant future as they will be performing as special guests for Bloodstock Metal 2 The Masses Ireland’s Semi-Final C on April 28th in Dublin’s Fibber Magees. 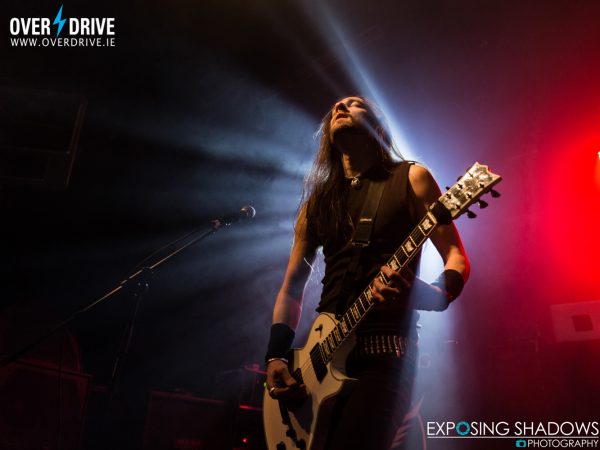 And so on to the main attraction, you can feel the icy chills as the stark lights bathe the crowd, the synth intro plays and Satyricon (4/5) take to the stage, opening with Midnight Serpent, the live band are in fine form with Frost thundering away in the engine room and Satyr, decked in leather like an evil Elvis, commands the captivated audience.

This is not about stage banter, this is about the power of the music and lyrics to get the audience moving, a simple fist in the air and a cry of “Dublin!” is enough to ensure huge roars of approval from the audience, the crowd really lap up every second, chanting along with Satyr as he uses is trident mic stand like a pulpit, preaching to the blackened masses.

As well as playing tracks their current album, Deep Calleth Upon Deep, Satyricon dip into their back catalogue, giving the audience a smorgasbord of metal flavours from their career, the minimalist stage setting working in perfect harmony with the atmospheric blackness, the audience chanting along with Black Crow On A Tombstone was a particular highlight.

Thirteen tracks in and a short synth interlude hums in the background as the band leave the stage before returning for a three-track encore, closing the show on a triumphant rendition of K.I.N.G and a promise to return.

As we head out into the dark night, it may be the start of spring, but for the audience tonight at least, we prefer the dark winter!