A formidable package of face-melting metal has pulled into the Irish capital for an evening of sub-genre battering led by Brazilian legends Sepultura. 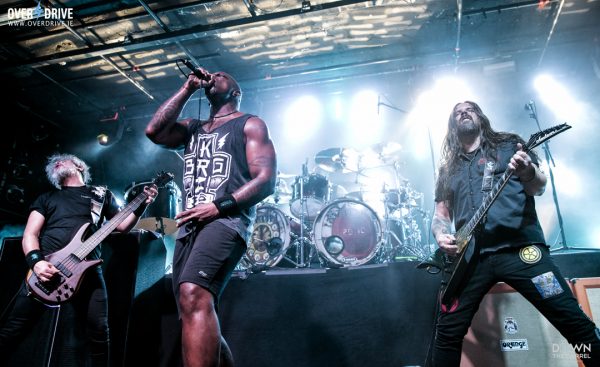 Inside the confines of Dublin’s Tivoli Theatre, Jersey City death-core masters, Fit For an Autopsy are wasting no time in strangling the punters that shower the venue’s front of stage floor with a mix of beer and adrenaline as the first of tonights pits break out, much to the amazement of the venue’s security, who stare in disbelief, as it’s only just gone 6.30pm.

Vocalist, Joe Badolato generates as much energy as a wind-farm from the lip of the stage as he commands the growing crowd to submit their loyalty via the act of organised chaos, and that’s exactly what he gets. 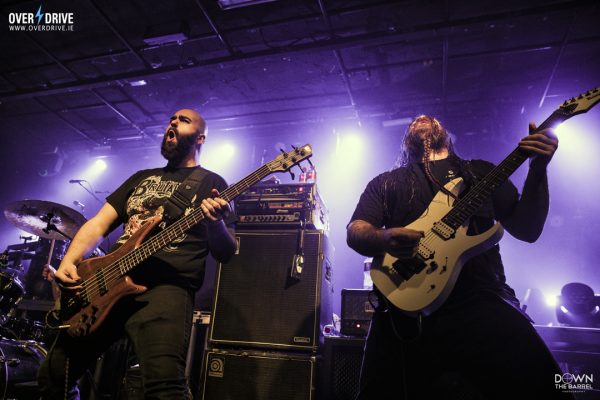 Fit For An Autopsy bring the opening proceedings to an impressive high, which solidifies the mood for the rest of the evening. Set highlights, ‘Still, We Destroy‘ and the wonderfully intimidating ‘Black Mammoth‘, simply destroy, leaving an exhausted, yet exhilarated audience half broken and begging for more. 3.5/5

Having last seen Goatwhore level Bloodstock’s Sophie Lancaster stage back in 2016, their inclusion on this tour was a welcome addition indeed. Opening with ‘Alchemy of the Black Sun Cult‘ get’s things underway with the Tivoli now impressively rammed considering the early doors. 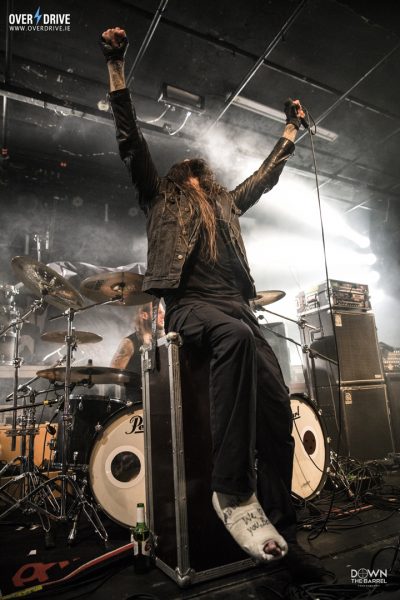 Sporting a broken leg, vocalist Ben Falgoust, delivers a worthy performance all the while propped up on an up-right flight case. The show must go on! Goatwhore brings their delightfully nasty brand of death-tinged metal down a piss-infested back alley and proceeds to torture their instruments with precision and visceral dominance, most noticeably the blatant synergy between TA Coleman and drummer Zack Simmons, which lays down a meaty foundation for Duets axe manipulation.

With a setlist that dips into their healthy back catalogue from 2006’s ‘A Haunting Curse‘ to last year’s ‘Vengeful Ascension‘, the New Orleans four-piece rip through a sensationally charged performance, which included exceptional moments such as ‘Collapse in Eternal Worth‘ and the irresistible anthem that is, ‘FBD‘ (that middle-eight breakdown pre-solo) before they bid their farewell.

Goatwhore’s seventh studio album ‘Vengeful Ascension‘ is out now via Napalm Records. Do yourself a favour and pick up a copy. Excellent stuff! 4/5 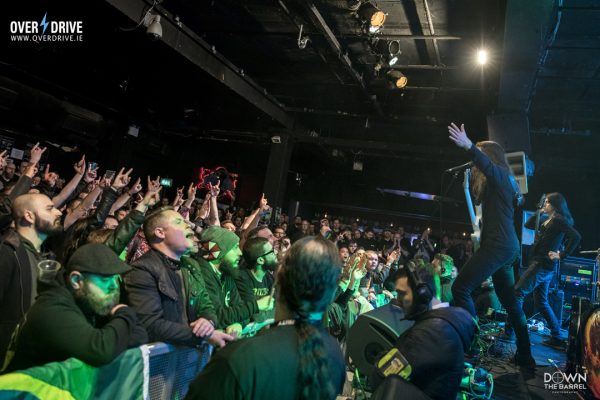 The Tivoli Theatre is now packed to capacity as Bavarian progressive/death crew, Obscura takes to the stage and unleashes the beast that is ‘Ten Sepiroth‘, upon the now, somewhat subdued audience, who clearly need a few more moments to recoup their energy levels.

This, however, does not take long as the band launches into ‘Akróasis‘ (self-titled track taken from their most recent 2016 studio offering) generating pits in the centre of the venue’s thronged floor which don’t let up for the duration of their set. 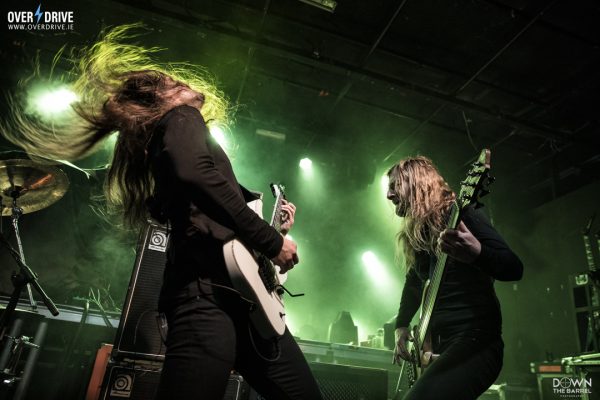 Obscura’s technical ability is translated with an astonishing backdrop of complex riffs and interchanging time signatures that are executed with what seems like little to no effort.

Vocalist/guitarist Steffen Kummerer leads his bandmates through a short, but sweet set of gems that concentrate mainly on 2016’s ‘Akróasis‘, with a glimpse of 2010’s  ‘Omnivium‘ with ‘Ocean Gateways‘ and ‘ The Anticosmic Overload‘  2009’s ‘Cosmogenesis‘. Finishing up with ‘Centric Flow‘, Obscura exit the stage amidst a plague of Sepultura’s stage techs who strip the stage back for tonight’s headliners. 3.5/5

Having performed in Ireland only as recent as March 2017, with headliners Kreator and Soilwork (see that review here), Sepultura are back and ready to unload a mammoth-like enforcement of validity dipping into their ‘mostly’ rich back catalogue. 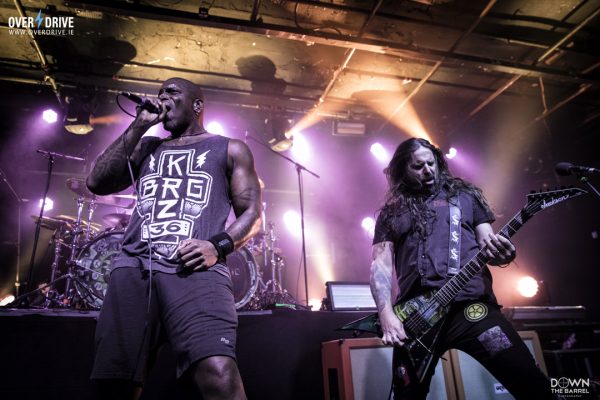 With the Tivoli Theatre now bursting at the seams, man/mountain frontman Derrick Green positions himself centre stage for the beginning of what can only be described as ‘pure fucking war‘ as his bandmates, launch into ‘I Am The Enemy‘. Bodies fly, surf and pierce the air with a deafening charge, as legends Andreas Kisser and Paulo Jr. relentlessly attack the senses with sonic napalm.

Regardless of what’s happening at the lip of the stage, the jaw-dropping performance from Eloy Casagrande simply defies logistics. Having now been an official member since 2011, the 27-year-old Brazilian has become a rising star in his own right.

When witnessing his strength and undoubted competence behind the kit during tracks such as ‘Territory‘ and ‘Desperate Cry‘, as well as more recent offerings such as ‘Kairos‘, there is no question that his impact on the overall sound of Sepultura has been a remarkable one. 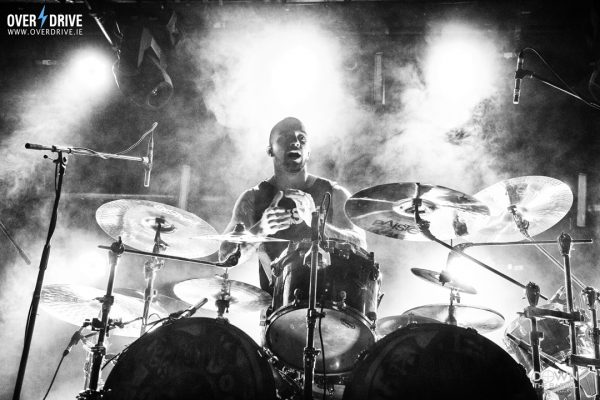 2018 marks the 20th-anniversary of Derrick Green’s role as Sepultura’s frontman, (feeling old yet?) and with his undeniable presence during tonight’s setlist – be it old or new material – you would need your head checked if you are still clinging onto the hope of Max returning to the fold. Why would he? Or more importantly, why would THEY want him back? 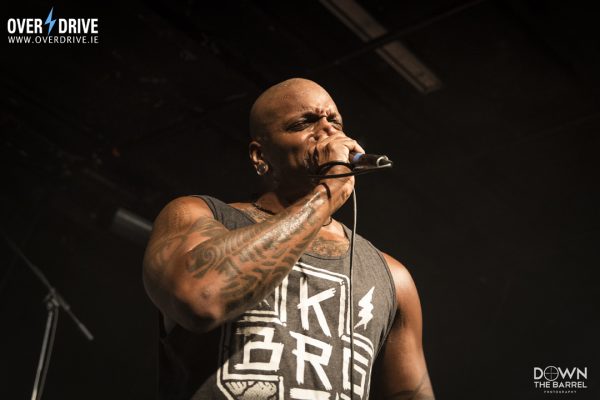 Sepultura are sounding better than ever right now and having personally seen them back in the 90’s, with the original ‘classic‘ line up, there is no question in my mind that they are on the cusp of their second coming. With regards to their confidence in stepping into uncharted waters and pushing the limits of their abilities, this current Brazilian/American version of what was once considered to be the corner-stone of contemporary metal is bang on course for creating a landmark and genre-tilting album in the not too distant future.

Clearly enjoying the atmosphere in the venue, Kisser and his bandmates respond to the hungry crowd with a plethora of bangers, old and new, focusing very much on their latest studio release ‘Machine Messiah‘ offering six tracks in total, including the instrumental ‘Iceberg Dances‘.

The final quarter of the set is old-school heavy with the likes of ‘Inner Self‘, ‘Refuse Resist, ‘Arise‘ and an encore of ‘Slave New World‘, ‘Ratamahatta‘ and the anthem that planed the infamous “Nu-Metal” seed, ‘Roots Bloody Roots‘

Grins all round, Sepultura takes their bow and with a heartfelt “thank you’ from Andreas, the venue returns the sentiment with a vociferous response that rings out into the cold night air alerting passers-by who stare in wonder at the army of sweaty, grinning crowds of excited punters exiting the venue. Excellent stuff indeed! 4.5/5